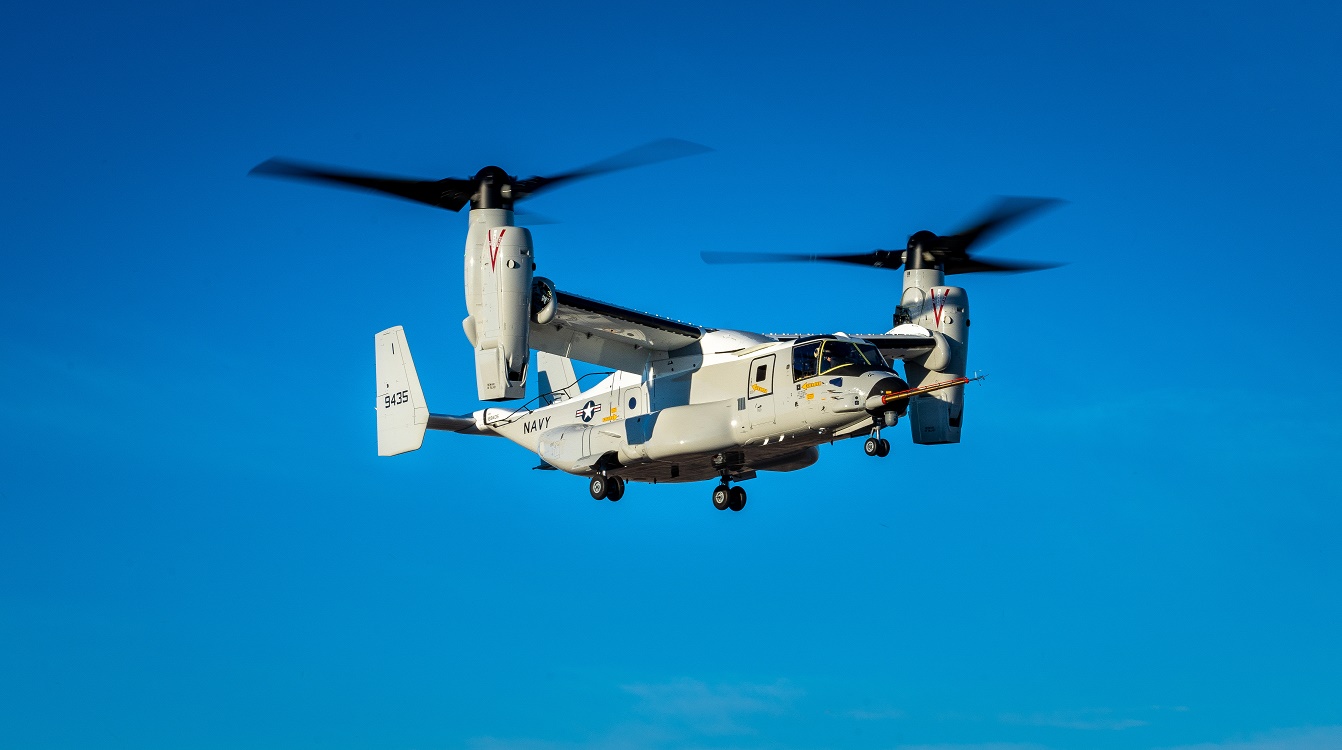 The first CMV-22B Osprey – the tiltrotor aircraft selected to replace the Navy’s aging fleet of C-2A Greyhounds as the carrier onboard delivery aircraft – completed its first flight operations, according to its manufacturer.

Compared to the MV-22B flown by the Marine Corps, the Navy CMV-22B variant has extended operational range, with the ability to transport up to 6,000 pounds of cargo or personnel to a 1,150 nautical mile range, according to a Naval Air Systems Command fact sheet.

A consortium of Boeing and the Bell Textron subsidiary of Textron Inc. builds the CMV-22B Osprey. The flight test occurred at Bell’s Amarillo Assembly Center in Texas.

“With the ability to travel up to 1,150 nautical miles, the CMV-22B will be a lifeline for our servicemen and women out at sea,” Kristin Houston, the vice president of Boeing Tiltrotor Programs and director of the Bell-Boeing V-22 Program, said in a statement.
“The quality and safety built into this aircraft will revolutionize the way the U.S. Navy fulfills its critical carrier onboard delivery mission.”

The Navy’s Osprey variant also has a beyond-line-of-sight HF radio, a public address system for passengers, improved fuel-dump capability and an improved lighting system for cargo loading and unloading, when compared to other variants, according to NAVAIR.

The Navy started using Greyhounds as its COD in the 1960s. The Navy announced in 2015 its plan to replace Greyhounds with Ospreys. The Navy is getting 39 Ospreys as part of a $4.2-billion contract modification with Bell-Boeing the Pentagon announced in July 2018. Bell-Boeing plans to deliver the first CMV-22B to the Navy early this year for developmental testing. The overall program of record calls for 48 aircraft, though current Navy plans only show funding for 44, including the 39 under contract.

In December 2018, the Navy established its first Osprey squadron, Fleet Logistics Multi-Mission Squadron 30, at Naval Air Station North Island. The “Titans” of VRM-30 are scheduled for their first operational detachment deployment in 2021 on the aircraft carrier USS Carl Vinson (CVN-70), according to the Navy.

The first Osprey deployment on Vinson is expected to coincide with the first operational deployment of the Navy’s F-35C Lighting II Joint Strike Fighter. The Navy selected the V-22 as its new COD because the aircraft can carry an F-35 engine to an aircraft carrier.