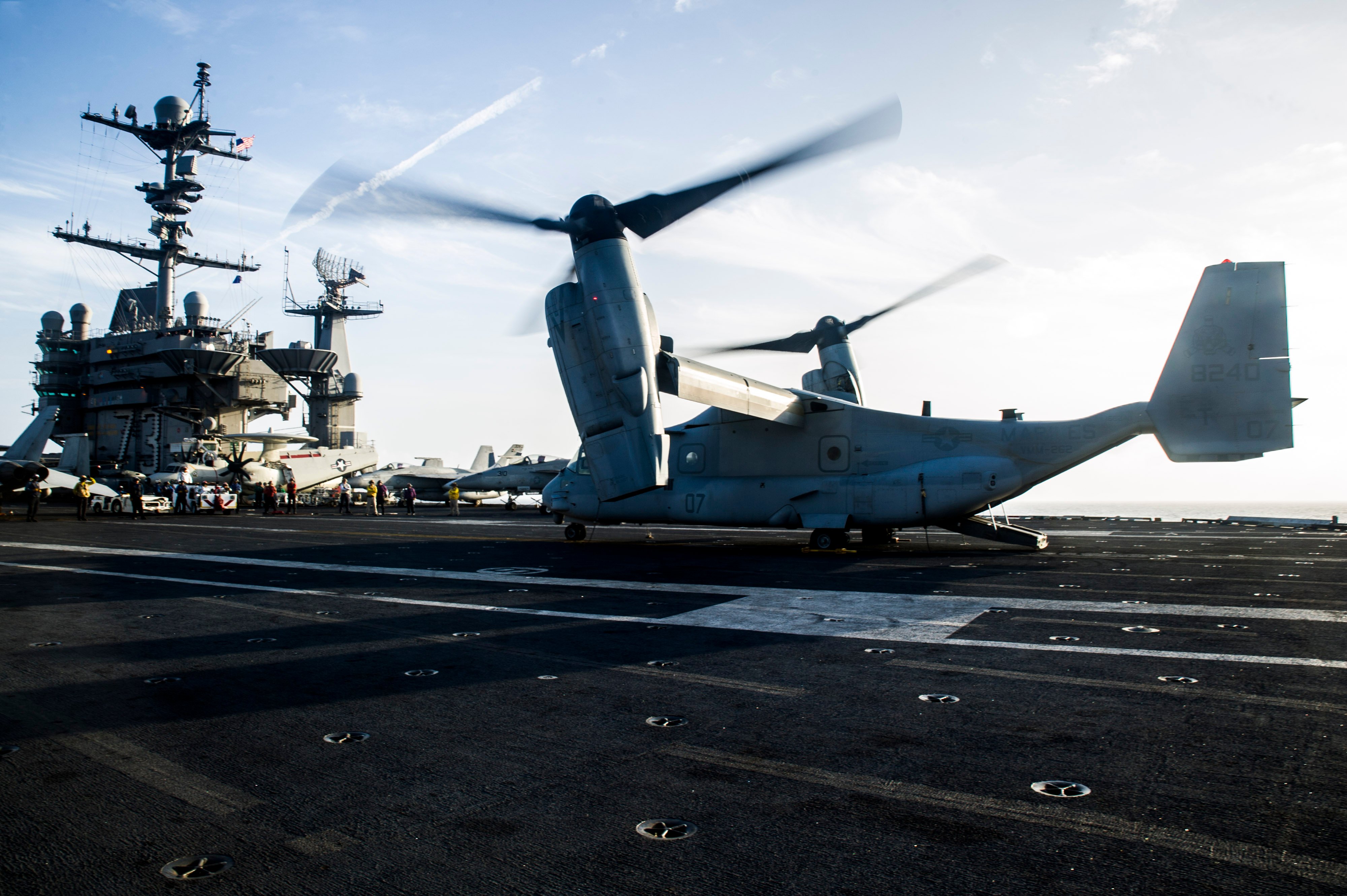 The following post has been updated to include additional comments from Sean Stackley, assistant secretary of the Navy for Research, Development & Acquisition (RDA).

CRYSTAL CITY, VA. – The Secretary of the Navy confirmed the existence of an agreement between the Navy and Marine Corps to utilize the Bell-Boeing V-22 Osprey tilt-rotor as the Navy’s replacement for the Northrop Grumman C-2A Greyhound as the utility aircraft for the Navy’s carrier.

“I know that the memorandum has become public before the budget, but I simply have to wait until the budget drops on the V-22,” Mabus said during the Surface Navy Association 2015 symposium.
“One of thing I will say on the possible use of the V-22 is those are great examples of the Navy and Marine Corps team working together. It’s also a great example of using a proven manufacturing process, a proven asset to get [capability out] by using a proven system.”

Earlier this week, a report in Breaking Defense gave details of the Jan. 5 memorandum of understanding (MOU) — signed by Chief of Naval Operations (CNO) Adm. Jonathan Greenert, Marine Commandant Gen. Joseph Dunford and Mabus — will have the Navy buy four V-22s starting in Fiscal Year 2018 to 2020.

“The Navy is responsible for modifying these V-22s into an HV-22 configuration for the [carrier onboard delivery] (COD) mission,” reads the document.
“The parties agree that subsequent documents will provide details on the concept of operations and milestones. A memorandum of agreement will detail [reimbursable] Marine Corps support for the Navy’s HV-22 transition, which includes training and potential deployment of Marine MV-22 aircraft and personnel to support COD requirements.”

In response to the report, Navy officials told USNI News, “the Navy continues to consider acquisition strategies and options to recapitalize the carrier onboard delivery, or COD, capability by 2026.”

The final decision will be included in the Fiscal Year 2016 Department of the Navy budget submission, due to Congress in early February.

The current Greyhound fleet is more than 30 and the requirement is closer to 44, Sean Stackley, assistant secretary of the Navy for Research, Development & Acquisition (RDA), told reporters on Thursday.

The Department of the Navy conducted an analysis of alternatives (AoA) for the new COD looking at, “extending the service life of the current COD aircraft, building new aircraft or using the MV-22 in the role of the COD aircraft,” Stackley said.
“There were pros and cons with each.”

Though Stackley would not confirm the V-22 as the future COD, he did say its selection would mean a significant change in the concept of operations (CONOPS) for the aircraft.

“When you look at the MV-22 as the COD, it’s much more than a COD aircraft and then you have to take a look at that and ask yourself, ‘given all the capability of the MV-22, all that other capability that you get, all the different ways you can employ that aircraft just as the COD, what that would mean in terms of the air wing, the carrier, the other ships in the carrier battle group, you have to spend a lot of time look at that in terms of CONOPS and is that a good fit or not,” he said.
“[But] I didn’t say that’s what we’re doing.”

In addition to Bell-Boeing, Northrop had pitched an upgraded C2 platform while Lockheed Martin offered the unusual idea of rebuilding the service’s old S-3 Viking aircraft as a COD and a refueling tanker branded as a C-3.

With the likely selection of the V-22 for the COD role, the largest outstanding question is how the aircraft will transport the engine F-135 engine for the F-35 Lighting II Joint Strike Fighter (JSF).

Stackley said the Navy was still working on the engine transportation problem with the MV-22.

“We’re using mockups to demonstrate whether or not we can or can’t {transport the engine]. We’re going through form, fit and function, mockups to see how it would integrate with an MV-22,” he said.