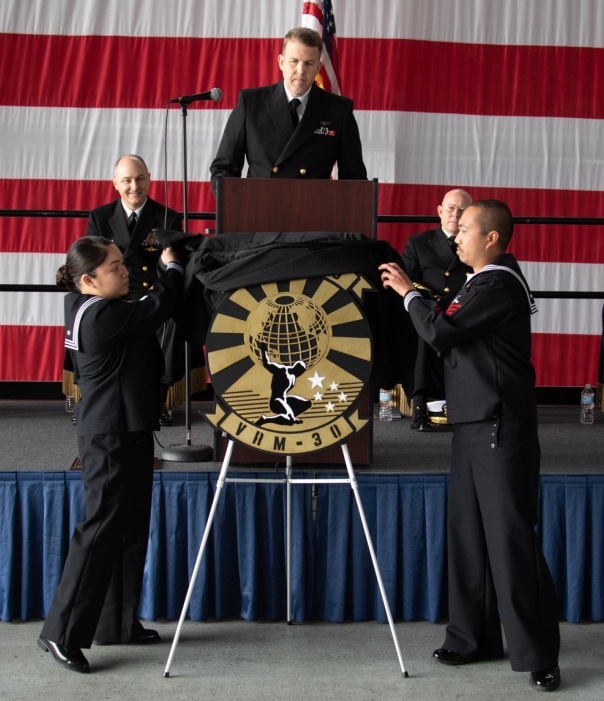 The Navy stood up its first squadron that will field the CMV-22B in a Friday ceremony. The Titans of Fleet Logistics Multi-Mission Squadron (VRM) 30 will be the first unit to field the replacement for the Navy’s fleet of C-2A Greyhound carrier onboard delivery (COD) aircraft.

“This platform is our future and when you look at the nature of the future fight, we need that versatility, that flexibility that’s going to be provided in every subsequent squadron that transitions,” Vice Adm. DeWolfe H. Miller, the Navy’s air boss, said during the ceremony, held in San Diego.

Compared to the C-2A Greyhound, the CMV-22B has an increased range, more cargo capacity, enhanced beyond-line-of-sight communications, and offers quicker cargo loading and unloading, according to the Navy.

In October, Navy officials announced they had sped up the transition to CMV-22B as the fleet’s COD. The first three CMV-22B aircraft are now expected to deploy in 2021, according to the Navy. The retirement of the Navy’s last C-2A Greyhounds is now scheduled to occur in 2024, about three years earlier than the previously announced 2027 retirement. Navy aircrews already started training with Marine MV-22 Osprey crews.

The following is the complete Dec. 14, 2018 statement from Naval Air Forces.

VRM-30 was established to begin the Navy’s transition from the C-2A Greyhound, which has provided logistics support to aircraft carriers for four decades, to the CMV-22B, which has an increased operational range, greater cargo capacity, faster cargo loading/unloading, increased survivability and enhanced beyond-line-of-sight communications compared to the C-2A.

“Where no instructions existed, no patch existed, no ‘here’s how we are going to perform our duties everyday’ existed, this team will define that. And it’s exciting because we can establish right off the bat those best practices,” said Vice Adm. DeWolfe H. Miller III, Commander, Naval Air Forces. “This platform is our future and when you look at the nature of the future fight, we need that versatility, that flexibility that’s going to be provided in every subsequent squadron that transitions.”

The first CMV-22B aircraft are scheduled to be delivered to the squadron in FY20. While VRM-30 awaits the arrival of the CMV-22B, Navy pilots and maintainers will train with the United States Marine Corps, which has flown the MV-22 since 2007. As the C-2A squadrons stand down, their pilots and aircrew will transition to the CMV-22B. The final C-2A squadron is scheduled to stand down in FY24.