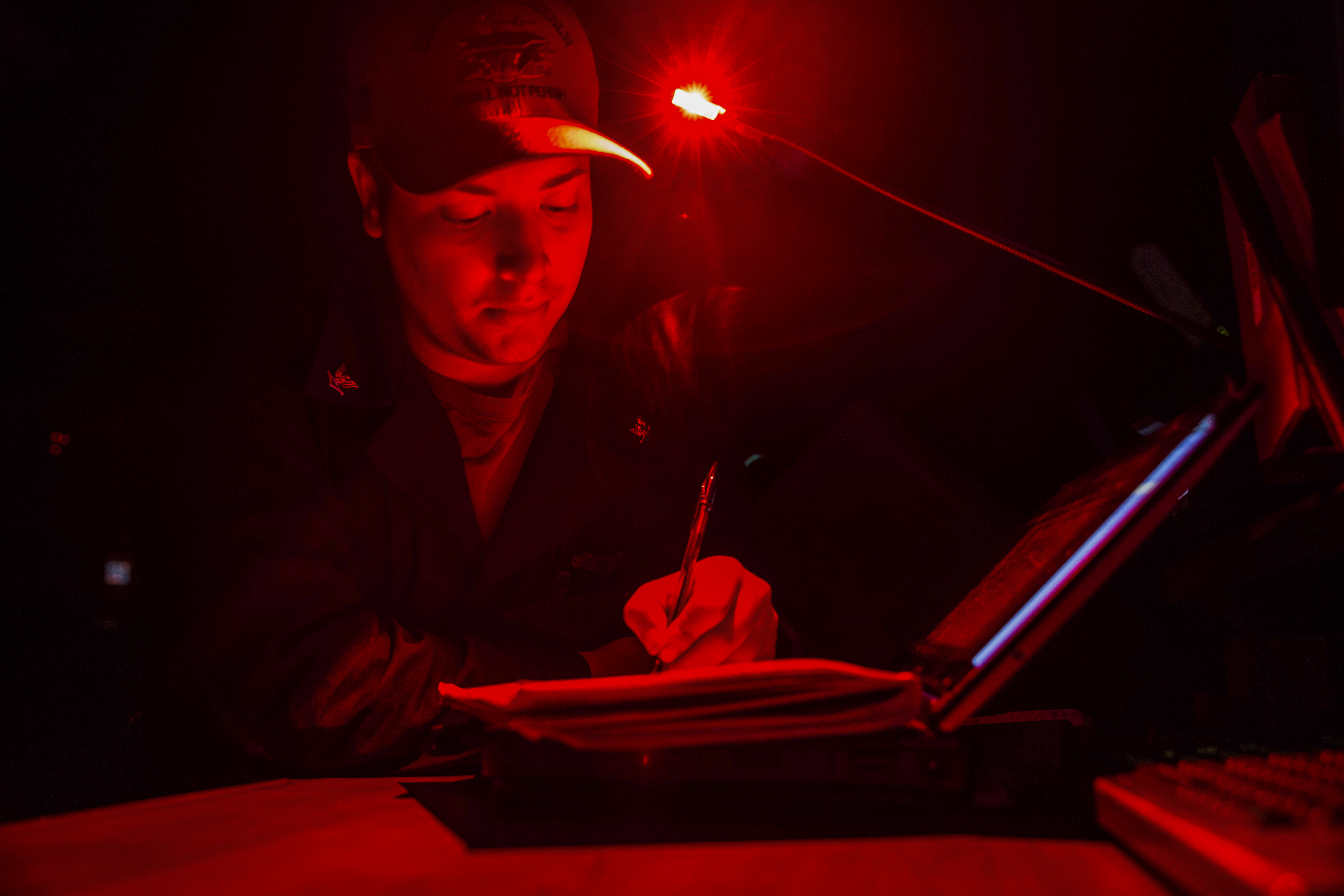 Quartermaster 3rd Class Ryan Gouger, from Newberg, Ore., writes the first 2020 deck log of the year while standing Quartermaster of the Watch on the bridge of the aircraft carrier USS Abraham Lincoln (CVN 72). Navy photo

Considering the length of time USS Abraham Lincoln (CVN-72) spent away from home in 2019, perhaps it’s fitting the crew of the carrier wrote the fleet’s celebrated first deck log entry of the year.

“As another year comes to an end, sailors reflect on the past/And how it all began,” Abraham Lincoln’s middle watch deck log entry reads.

In a century-old tradition, the first log entry of the year on a U.S. warship has been composed in verse. Abraham Lincoln departed Norfolk on in April, the start of what was expected to be a roughly seven-month around-the-world deployment ending at a new homeport San Diego.

Quartermaster 3rd Class Ryan Gouger composed the first deck log of the year while standing watch on the bridge of Abraham Lincoln, which had recently crossed the International Date Line.

His entry captured the mood on Abraham Lincoln as it was heading back to homeport, nine months after leaving.

“Good morning, Lincoln Nation! We finally got some information. We are headed to 7th Fleet, But first we to clean/Your filthy pollywog feet,” was how the log captures the moment the crew learned they would be departing the Middle East for the trip to San Diego.

Abraham Lincoln passed through the Suez Canal in May and remained in the Middle East until USS Harry S. Truman (CVN-75) could relieve the carrier. Truman’s deployment was delayed for months because of an extensive electrical malfunction that occurred in August.

“Extensions upon extensions—/ The ship was very much needed,” reads the log.
“Missing holidays with family/Everyone felt defeated.”.

The entry also includes some of the lowest moments during the year, “Six short blasts are sounded: Man overboard man overboard!”

On July 19, the Navy ended the search for a sailor who was believed to have gone overboard while Abraham Lincoln operated in the Arabian Sea.

Gouger wraps up the log entry with an upbeat look ahead.

“As we start off a new year, Lincoln sailors are in joy and glee/To what we leave behind in 2019.
Lots of memories and lots of fun, But what comes next in 2020 has begun,” the log entry states.

Nobody is quite sure how the tradition of composing first-of-the-year deck log entries is prose started, wrote Brian Shottenkirk and Karolina Lewandowska from U.S. Naval History and Heritage Command.

The tradition is unique to the U.S. Navy, Shottenkirk wrote. The Royal Navy and other Commonwealth navies do not practice the same tradition. While the log entries are supposed to include standard information about the ship’s operations, Shottenkirk wrote, “The [officer of the deck] (often with some assistance from the crew) is granted the freedom to compose the entry as they artistically deem fit.”

As another year comes to an end,
Sailors reflect on the past
And how it all began.

COMPTUEX was the first chapter
Of our long extended adventure.
Countless Surprise GQs and never-ending
EMCON conditions
Were the ship’s main ambition.

But together through it all
All the Sailors stood tall
With acceptance of the fate
The ship was soon going to face.

‘Twas the night before deployment,
And all through the base,
Every Lincoln Sailor packing
Their sea bags and suitcase.
Saying goodbye to families
Because it’s the last day.

6th Fleet was our first stop.
Palma De Mallorca, Spain,
Made our mouths drop.
Such a beautiful place to see—
We wondered what the next port would be.

Good morning, Lincoln Nation!
We finally got some information.
We are headed to 7th Fleet,
But first we to clean
Your filthy pollywog feet.

We crossed the equator
And to become a shellback was in favor.
Covered in green slime
And drenched in saltwater of course,
We were accepted into King Neptune’s Court.

As we start off a new year,
Lincoln Sailors are in joy and glee
To what we leave behind in 2019.
Lots of memories and lots of fun,
But what comes next in 2020 has begun.