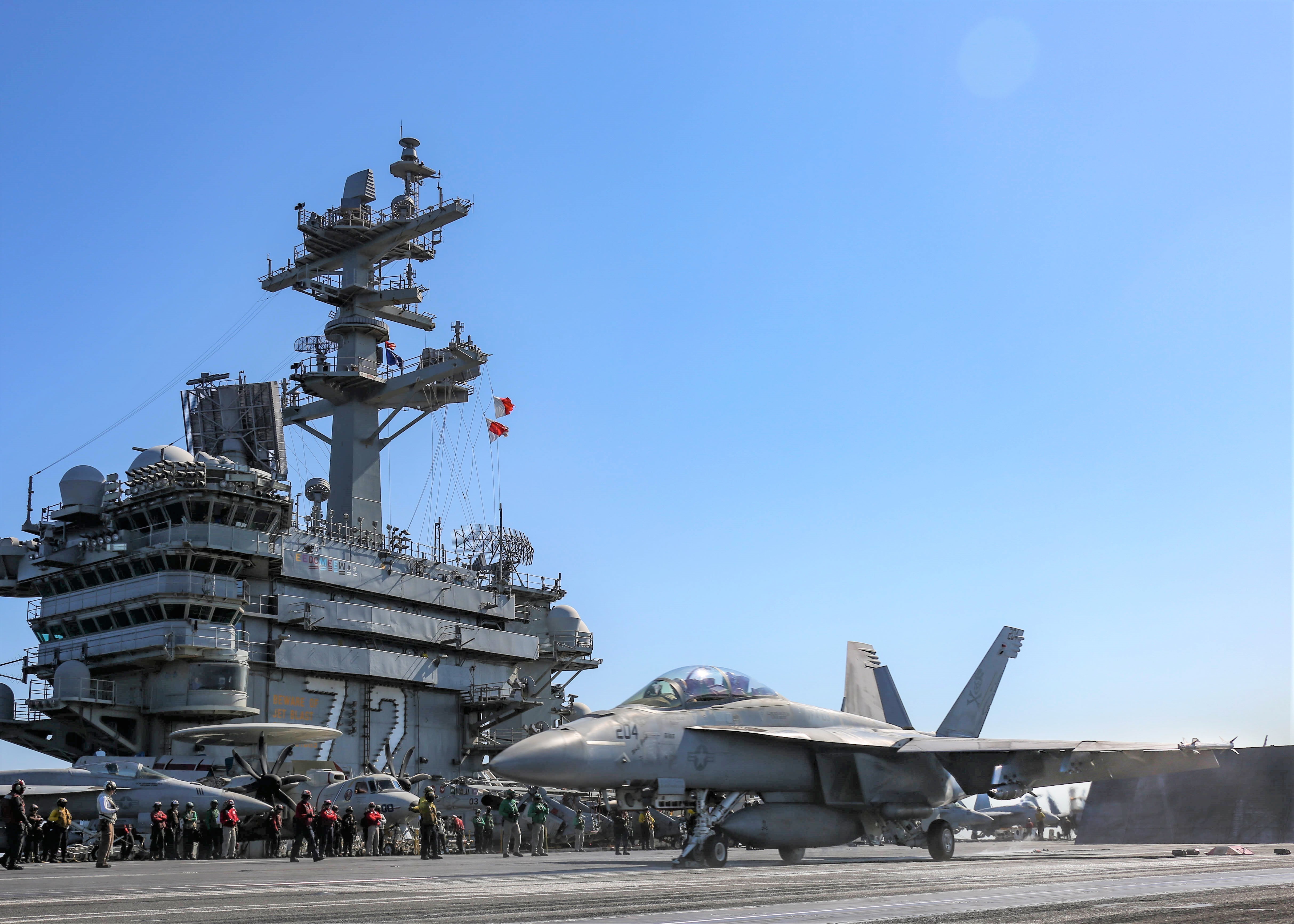 An F/A-18F Super Hornet attached to the ‘Jolly Rogers’ of Strike Fighter Squadron (VFA) 103 launches from the flight deck of the aircraft carrier USS Abraham Lincoln (CVN-72) on Nov. 22, 2019. US Navy Photo

This post has been updated with an additional statement from the Department of Defense.

The Abraham Lincoln Carrier Strike Group is now in the Indian Ocean after a seven-month stint in the Middle East in parallel with the U.S. maximum pressure campaign targeting Iran, defense officials confirmed to USNI News on Monday morning.

Truman is now in the Red Sea approaching the Bab el-Mandeb Strait, the Gulf of Aden and the Horn of Africa.

Lincoln has been operating in a tight box between the North Arabian Sea and the Gulf of Oman since it was scrambled to the region May 9 in response to a request from CENTCOM commander Gen. Kenneth McKenzie at the urging of then-National Security Advisor John Bolton.

At the time, Bolton called the move against Iran as a reaction to a “number of troubling and escalatory indications and warnings.”

“The [carrier deployment was a defensive action following credible threats to U.S. forces in the Middle East and a deterrence measure towards Iran for those threats against our forces,” Pentagon spokeswoman Cmdr. Rebecca Rebarich said in a Monday afternoon statement to USNI News.

Lincoln was extended in the Middle East on orders from Secretary of Defense Mark Esper while Truman was laid up with problems with the carrier’s electrical system.

The Navy elected to deploy instead as a surface action group (SAG) Truman’s escorts under the command of U.S. 2nd Fleet in mid-September. Ahead of transiting to the Middle East, the SAG conducted anti-submarine warfare drills off of Iceland. Those destroyers and cruiser eventually relieved Lincoln‘s escorts, which returned to their East Coast homeports. They will now stay in CENTCOM to support Truman.

Truman completed the repairs last month and deployed with no notice, after its air wing had quietly certified aboard USS John C. Stennis (CVN-74) in the Gulf of Mexico and then conducted a final reintegration on Truman.

The episode that sidelined Truman and forced Lincoln into an unplanned extension points to the fragility of the service’s East Coast carrier force as the Navy has had trouble catching up with the maintenance from 15 grueling years of supporting the wars in Iraq and Afghanistan.

Truman conducted its second deployment in two years after a maintenance period for USS Dwight D. Eisenhower (CVN-69) ran much longer than expected.

Now Lincoln is set to return to its new homeport of San Diego, Calif., after its extended deployment. It’s unclear if the strike group will linger in the Western Pacific before heading home.

The carrier has been deployed for 259 days as of Monday. Lincoln holds the record for longest carrier deployment in the post-Cold War era, with a deployment of 290 days mostly in the Middle East from July 2002 to May 2003.