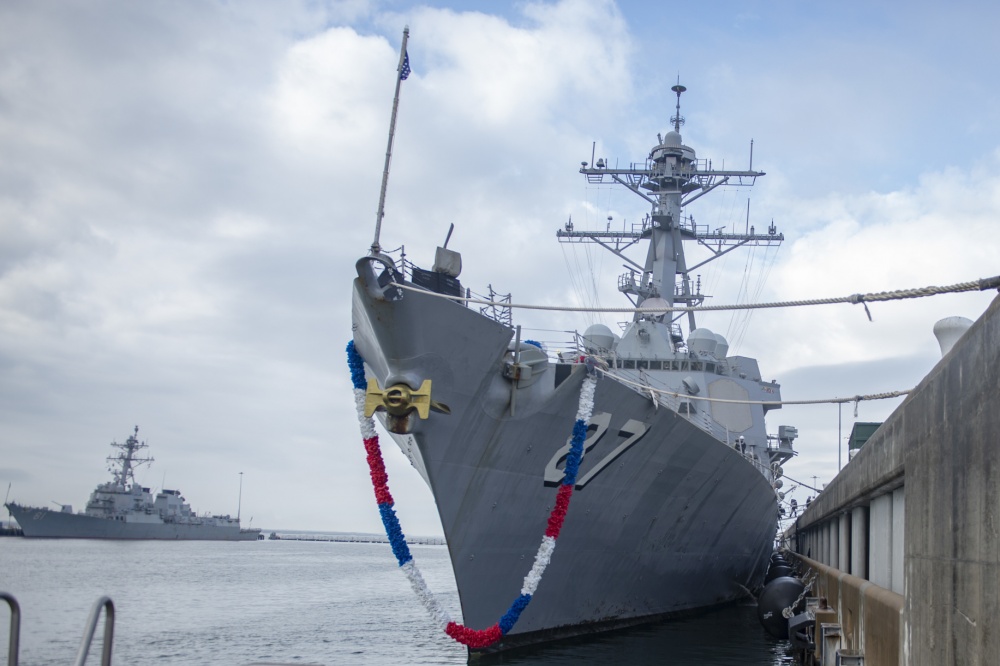 This post has been updated to clarify the Navy cannot immediately deploy an aircraft from the East Coast to replace Lincoln.

Three guided-missile destroyers escorts returned to their Norfolk, Va. homeport on Wednesday while their carrier, USS Abraham Lincoln (CVN-72), remains on station just outside the Persian Gulf, a Navy official confirmed to USNI News on Thursday.

In their stead, escorts from delayed carrier USS Harry S. Truman (CVN-75) are filling in for the departed destroyers.

In mid-September, destroyers USS Lassen (DDG-82) and USS Farragut (DDG-99) departed Mayport, Fla., and were joined by Norfolk-based USS Forrest Sherman (DDG-98) and cruiser USS Normandy (CG-60) for a surface action group deployment while Truman was sidelined for unexpected and extensive repairs to its electrical system.

The swap in escorts comes following an indefinite extension of Lincoln as the U.S. seeks to keep pressure on Iran since the carrier was scrambled to just outside the Persian Gulf in May. The move was in response to what then-National Security Advisor John Bolton referred to as a “number of troubling and escalatory indications and warnings” from Iran. Since then, the Navy has been unable to deploy an East Coast carrier to replace Lincoln while the Norfolk-based carrier force has been struggling with systemic readiness problems. USNI News understands that the Navy hasn’t been asked to surge a West Coast or the service’s Japan-based carrier to the Middle East.

The Navy currently has six carriers on the East Coast unable to deploy:

As of Thursday, Lincoln had been deployed for seven months and three days. Under Defense Department rules, the order extending a carrier deployment past seven months must be approved by the Secretary of Defense.

News of the escort swap comes as U.S. Central Command announced there is a new commander to oversee the U.S.-coordinated Operation Sentinel that was established to protect merchant traffic traveling in and out of the Persian Gulf.

Rear Adm. Alvin Holsey will lead the Combined Task Force Sentinel based out of Bahrain.

Under the direction of the international CTF, “large naval vessels (sentinels) such as frigates and destroyers provide overwatch of critical choke points, while smaller naval vessels (sentries) such as patrol craft and corvettes patrol the key transit lanes between them,” read a statement from U.S. 5th Fleet.
“In addition, airborne surveillance assets monitor the flow of traffic through the highest risk areas, collectively providing a persistent presence in the area.”