The Navy’s explosive ordnance disposal (EOD) community is looking to leverage nearly two decades of expertise gained in the mountains of Afghanistan and the deserts in Iraq and apply them to helping the Navy gain sea control and beach access in a future high-end, near-peer adversary type of fight.

“Navy explosive ordnance disposal has become almost synonymous with enabling counter-insurgency and counter-terrorism operations in the desert and in the mountains in the Middle East. We have become the world’s experts at defeating improvised explosive devices and carving a path for America’s special operations force to gain access into a denied area in order for us to accomplish our assigned missions,” he said, noting the significance of conducting a future-looking Arctic exercise on the 18th anniversary of the Sept. 11 terrorist attacks that precipitated years of ground wars in the Middle East.

“A couple weeks ago, now three weeks ago, we shook the sand out of our boots, we donned some dry suits, and we conducted cold-water and cold-weather operations in Alaska” to prepare for a future fight in an austere and cold environment that would likely be communications-denied and spread out over a great distance.

Rojas noted that, in some ways, returning to the Arctic for the Arctic Expeditionary Capabilities Exercise would be a return to the past – during the Cold War, when the Navy often operated near and inside the Arctic Circle. In fact, last year the Harry S. Truman Carrier Strike Group sailed north of the Arctic Circle for the first time since the fall of the Soviet Union, and the carrier leveraged 1980s-era lessons such as bringing baseball bats on the deployment to help break up ice that formed on the flight deck.

Asked if the Navy EOD community could similarly look back in time for a refresher on how to operate in high-latitude environments, Rojas said that technology advancements have led to today’s EOD force operating in totally different ways than they did decades ago, meaning they need to learn anew how to conduct diving, mine hunting, beach clearance and other missions in an Arctic location.

“While all those lessons learned or [tactics, techniques and procedures] are very important and in many cases still relevant today, the difference today is that we have – we, the Navy EOD force – have evolved considerably,” he said.

“Yes, it is taking some of the old, in the past. But really, as we bring in this new technology, how do we develop our new way of fighting to become a more lethal offensive force?” 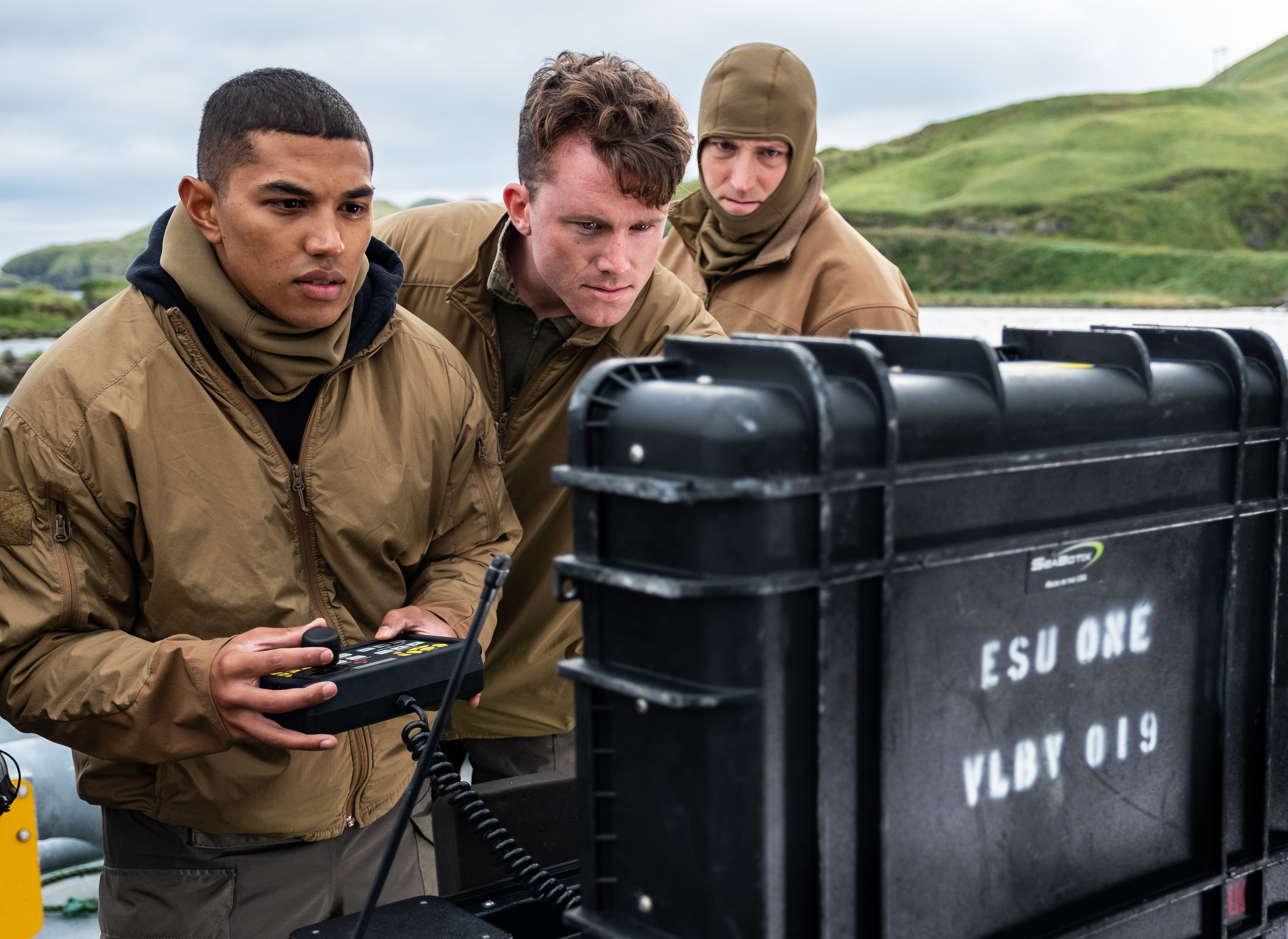 For example, for amphibious operations, the EOD teams used to put a diver into the water to check the planned beach landing lane and ensure there were no obstacles – debris, mines, or anything else that would keep surface connectors from pushing Marines or special forces ashore.

Today, Rojas said, unmanned underwater vehicles and remotely operated vehicles can do that with near-100-percent precision and without putting a man in potentially dangerous waters. During the exercise, these systems have been used to clear the way for a Marine Corps Special Purpose Marine Air-Ground Task Force (SP-MAGTF) to conduct amphibious operations.

The commodore said it was important to ensure in exercises like this one that the unmanned systems work as planned in Arctic waters, with temperatures in the 40s, strong currents, extreme tidal changes and 40-plus knot winds on land that could hinder command and control and communications.

“It is important for us to operate in these conditions because, when we look at emerging threats and as we look at near-peer competition, what the U.S. Navy is tasked to do, the operating environment is going to be very much like the environment we’re training in now,” he said of the waters near Anchorage and Adak, towards the southern end of the Aleutian Islands.

For example, Rojas said, the limiting factor of UUV operations is the lithium-ion battery that powers the underwater vehicle. The cold water temperatures and strong currents in Alaskan waters could cause the battery to deplete faster than usual, meaning that a routine Mk 18 Mod 1 Swordfish or Mk 18 Mod 2 Kingfish UUV operation off the coast of California would be impossible to conduct in the Alaskan environment. If that’s the case, the operators need better data on battery life in these waters so they can ensure future plans are actually executable.

Though some technology, such as unmanned systems, has drastically changed since the Cold War, there are some elements of “back to the future” in how the EOD community is operating – specifically, how they communicate. Rojas said that when he was a young officer, using high frequency communications was standard; today, with so much reliance on satellite communications, he said relatively few people understand HF communications.

“Today we have become very accustomed to using satellite communications. So we know in the future with near-peer adversaries we are going to be operating in a contested and in a comms-denied environment. So we focused a good portion of our time on truly increasing our high-frequency communications capability, because in a comms-denied environment this will be most likely the primary means of communications,” he said.
“So we were able to conduct high-frequency communications linkups from our forward staging base here in Anchorage over to Adak, from here on to ships in San Diego, and then also from Anchorage all the way to Guam.” 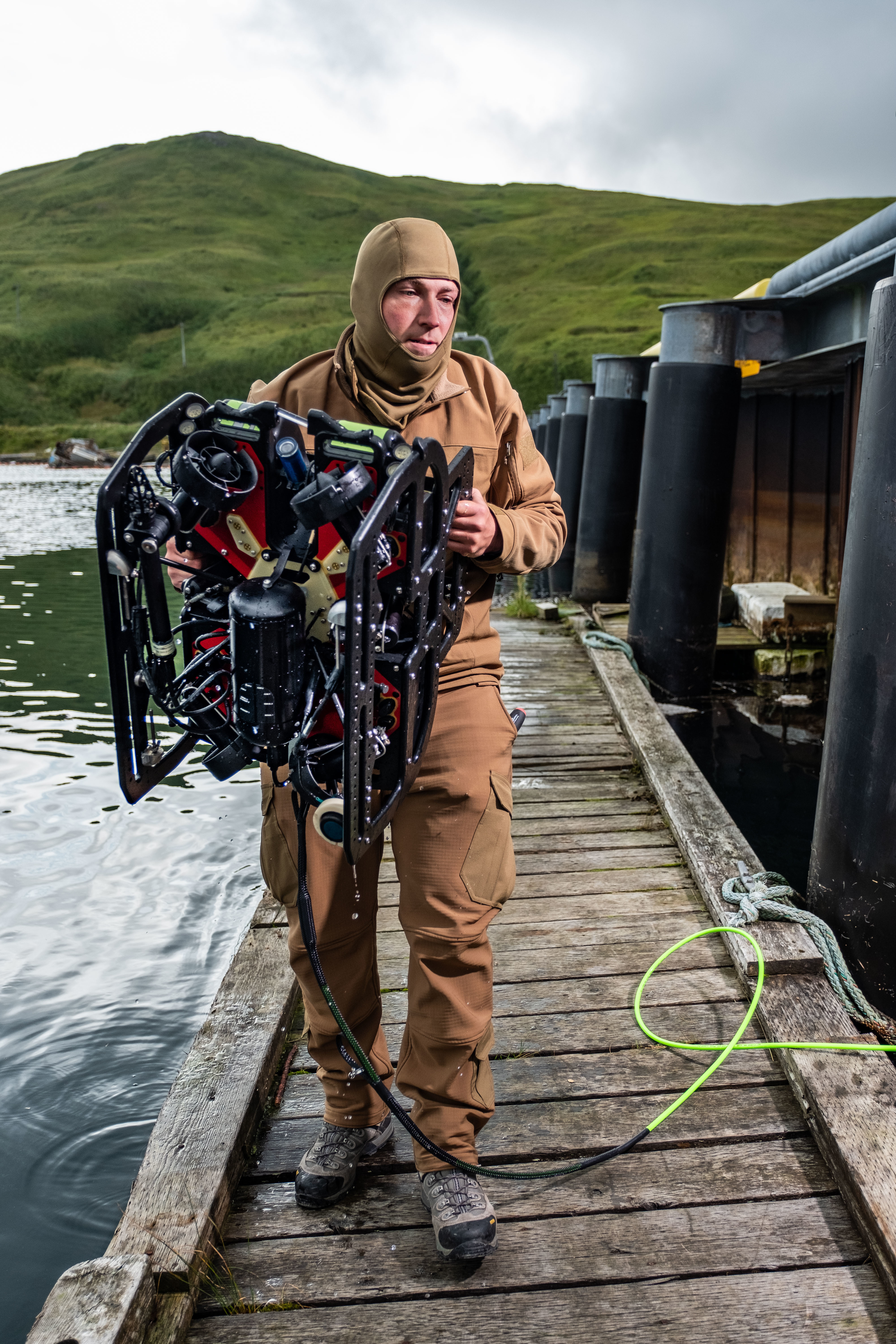 The long-distance communications – more than 4,500 miles – was supported by five different “expeditionary flyaway communications systems” tested in the exercise that are commercial or military off-the-shelf gear. The EOD community will test their effectiveness in this particular geography and climate to understand their usefulness going forward.

Rojas said this was the first Arctic Expeditionary Capabilities Exercise and he wasn’t sure if there would be another one next year – but he vowed that Navy EOD would be back. Due to both climate change and the expectation of increased activities in the Arctic, as well as concerns about Russian activities, as outlined in the National Defense Strategy, Rojas said it was important to be familiar with the local partners in Alaska and have gear that can function up there, to facilitate routine Alaskan training events.

He noted that, during the exercise, the EOD team found and cleared ship wrecks that could pose navigation hazards, as well as cleared a ship wreck that for 10 years had blocked access to Adak’s primary boat ramp.

“Adak now has clear access to the Bering Sea – and it could be potentially used as a forward-staging base (by the Navy) due to its deep water ports and its close proximity to near-peer competitors,” he said.

AECE 2019 is one of several U.S. Indo-Pacific Command exercises this year meant to prepare the joint force to operate throughout the Indo-Pacific in accordance with new concepts such as Littoral Operations in a Contested Environment and Expeditionary Advance Base Operations, according to a Navy news release.