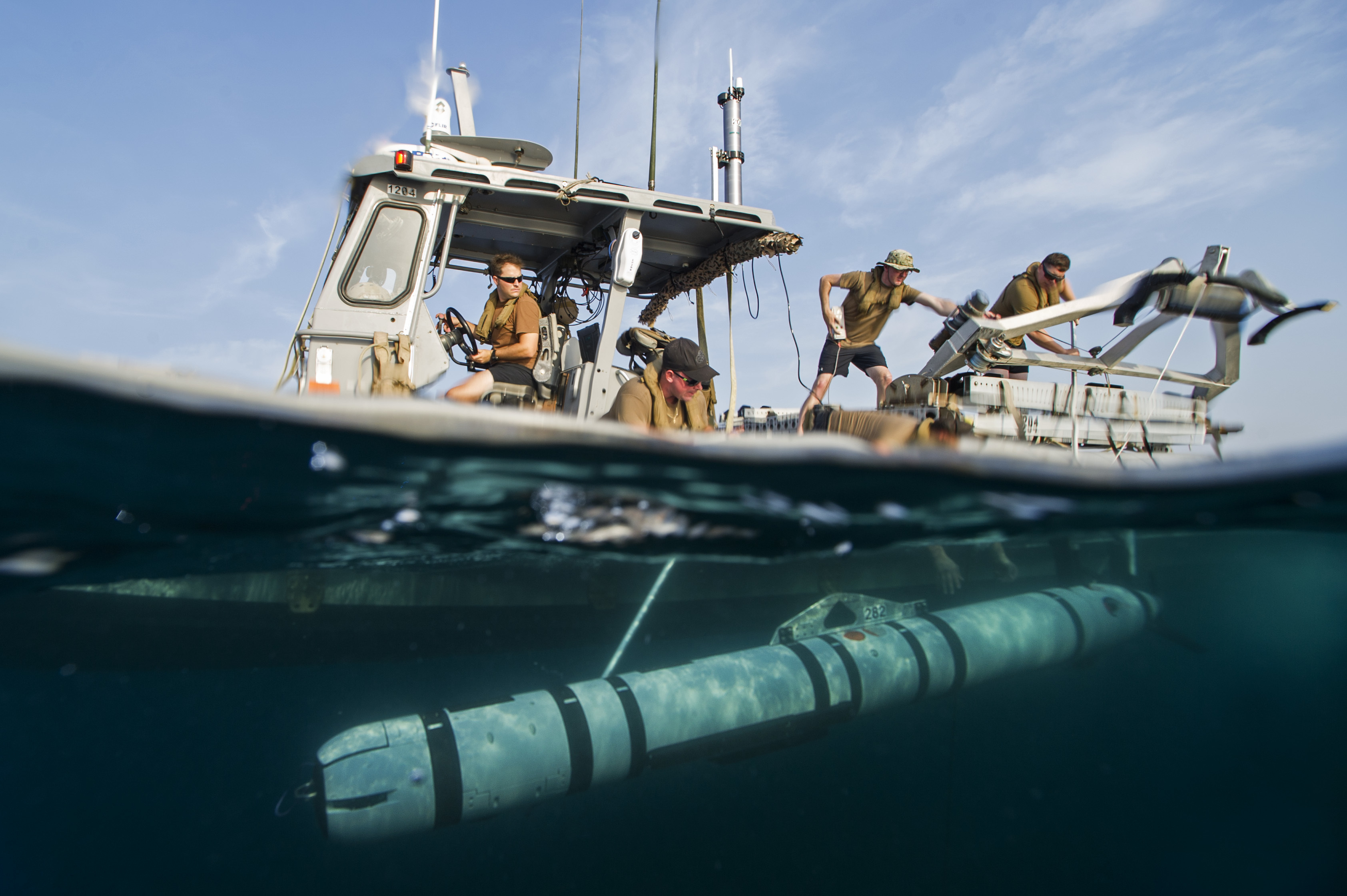 SAN DIEGO, Calif. – The Navy is investing in its explosive ordnance disposal (EOD) force, doubling the number of unmanned systems platoons in the community in the next couple years and improving the technology on their unmanned underwater vehicles.

The increase will add about 100 personnel to man the new platoons and the EOD Mobile Units they report to. The investment in these unmanned systems platoons – along with the expeditionary mine countermeasures (ExMCM) companies that command and control them – is helping the Navy’s EOD community have a greater presence around the globe.

ExMCM companies include unmanned systems platoons that use the Mk 18 Mod 1 Swordfish and the Mk 18 Mod 2 Kingfish to search bodies of water for potential dangers; an EOD mine countermeasures platoon with highly trained EOD techs that can reacquire a threat and either neutralize it underwater or safely bring it out of the water for study; and a five-person post-mission analysis cell that analyzes sonar and video data and makes recommendations on how to proceed to the ExMCM company and the higher headquarters at the EOD Mobile Unit.

ExMCM companies have been particularly active recently, developing procedures to operate on and employ platoons from a variety of U.S. and international navy ships and aircraft. Along with the upcoming increase in the number of companies, they are making themselves more adaptable and capable of handling threats as they evolve.

EOD Mobile Unit 1 – based at Naval Base Point Loma in San Diego, and the only West Coast unit with ExMCM companies – invited USNI News to join a demonstration mission with an unmanned systems platoon to better understand the community and how it is growing.

EOD Mobile Unit 1 commanding officer Cmdr. Jeremy Wheat told USNI News that the ExMCM companies have been developing embarkation plans and tactics to deploy on the Littoral Combat Ship, cruisers and destroyers, amphibious and auxiliary ships and even partner-nation warships. A recent push has been developing tactics to take the unmanned systems platoons and their UUVs from a ship and employ them forward via helicopter instead of via the platoons’ 11-meter rigid-hull inflatable boats (RHIBs) to give them more range.

“We’re working on how to safely deploy and recover the various systems by air, by different air platforms. We’ve done Mk 18 Mod 1, we’ve done work with that and deploying that by SH-60s. (Naval Surface Warfare Center) Panama City is working on doing a launch and recovery system for the Mod 2, and then the EOD platoon is relatively easy to move around by air – that’s one of our fundamental mobility skillsets, so that one’s easy,” Wheat said.
“The ability to be staged on a ship and extend our range of combat effectiveness out a couple hundred miles is very advantageous for us, as opposed to only being limited to what range we could achieve with our small boats. Getting out ahead of the maneuvering of the force by that far gives us more time to work and get more information to help them solve a problem.”

Wheat said his marching orders when he took command of the unit was to “get me on as many diverse sets of platforms as you can,” and that list has grown to include French amphibious ships and other foreign vessels.

“Basically because we’re so tailorable and scalable and we task organize for each unique mission, we can get on a host of different platforms to get us to the fight,” he added.

Every time an ExMCM company works with a new kind of ship or aircraft, the company adds to a catalog of lessons learned, load plans, tactics and other documents – so the next time a real-world need comes up and a company has to quickly put together a plan, they can look up past lessons learned and more rapidly assemble the right people and equipment for the mission.

Wheat said the ExMCM companies and the EOD community as a whole is very involved with Pacific partners through the Cooperation Afloat Readiness and Training (CARAT) training series, and with Middle Eastern partners through regular theater security cooperation work.

“I know that 6th Fleet is also looking at some unique CONOPS and how they employ expeditionary mine countermeasures with NATO partners to solve their mine warfare unique problems, so really we’ve got everything from the Pacific through the Central Command, and in Europe they’re working on it also,” Wheat said, adding that his unit is going to Alaska this fall for cold-weather training to further its ability to work in high latitudes. 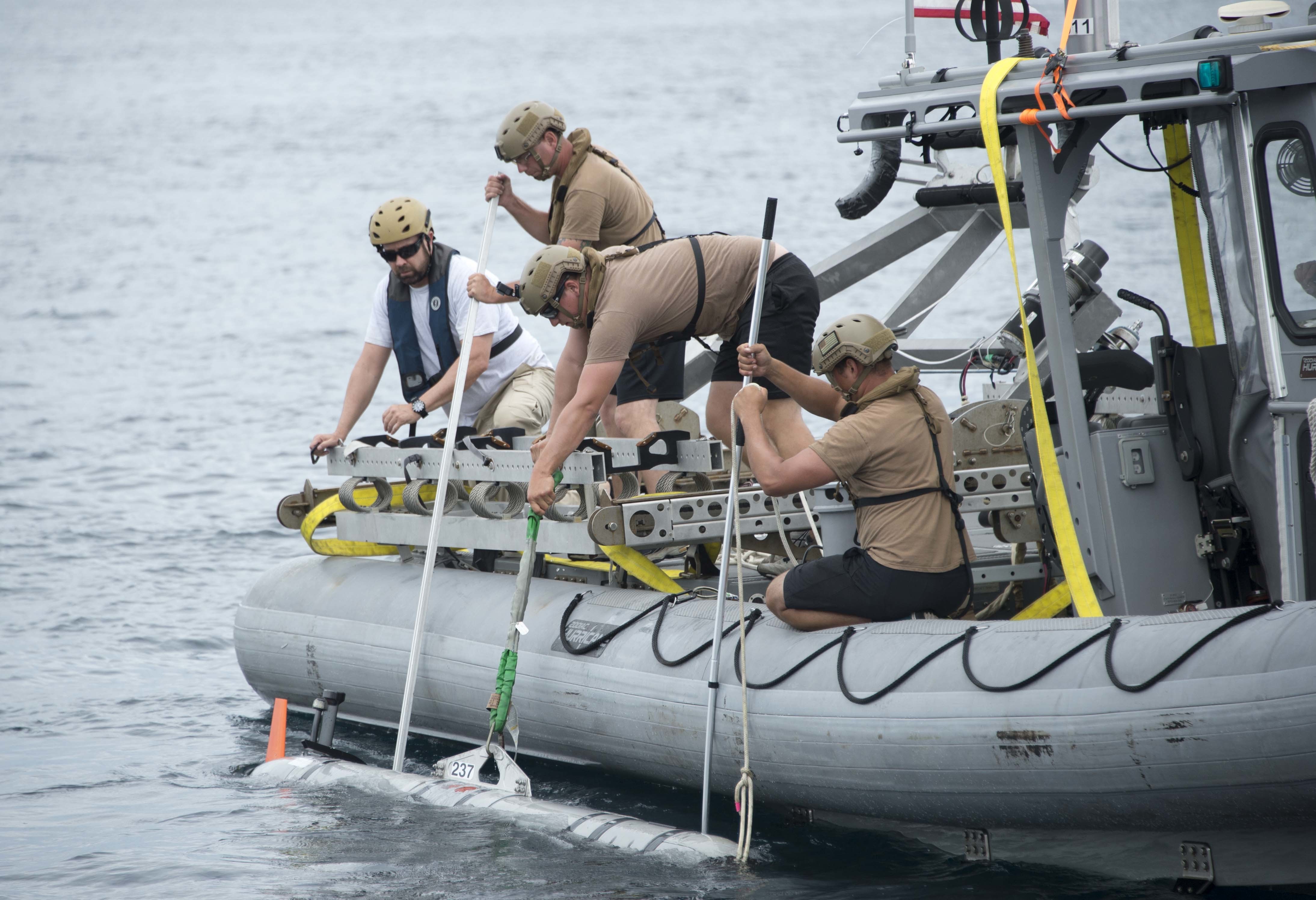 The Navy has eight unmanned systems platoons now and will grow to 16 in the next three years. Each platoon has six smaller Swordfish and six larger Kingfish UUVs, as well as RHIBs and auxiliary equipment to operate the UUVs. Unlike other parts of the EOD community, the men and women in the unmanned systems platoons are not EOD techs but rather pull from a range of fleet ratings.

Adding the eight new unmanned systems platoons and the 100-or-so new bodies to the community “gives us more capacity to meet the fleet and combatant commanders’ requirements, but it also allows us to provide more refined and more advanced training. Right now with the number we have we run very short training timelines,” but with more deployable platoons in the Navy, the EOD community will be able to better balance operational and training needs and give the platoons more time to rest and train at home.

In addition to the ExMCM companies seeing expansion in their size and the ways they can deploy, they are also seeing improvements in the technology they use. 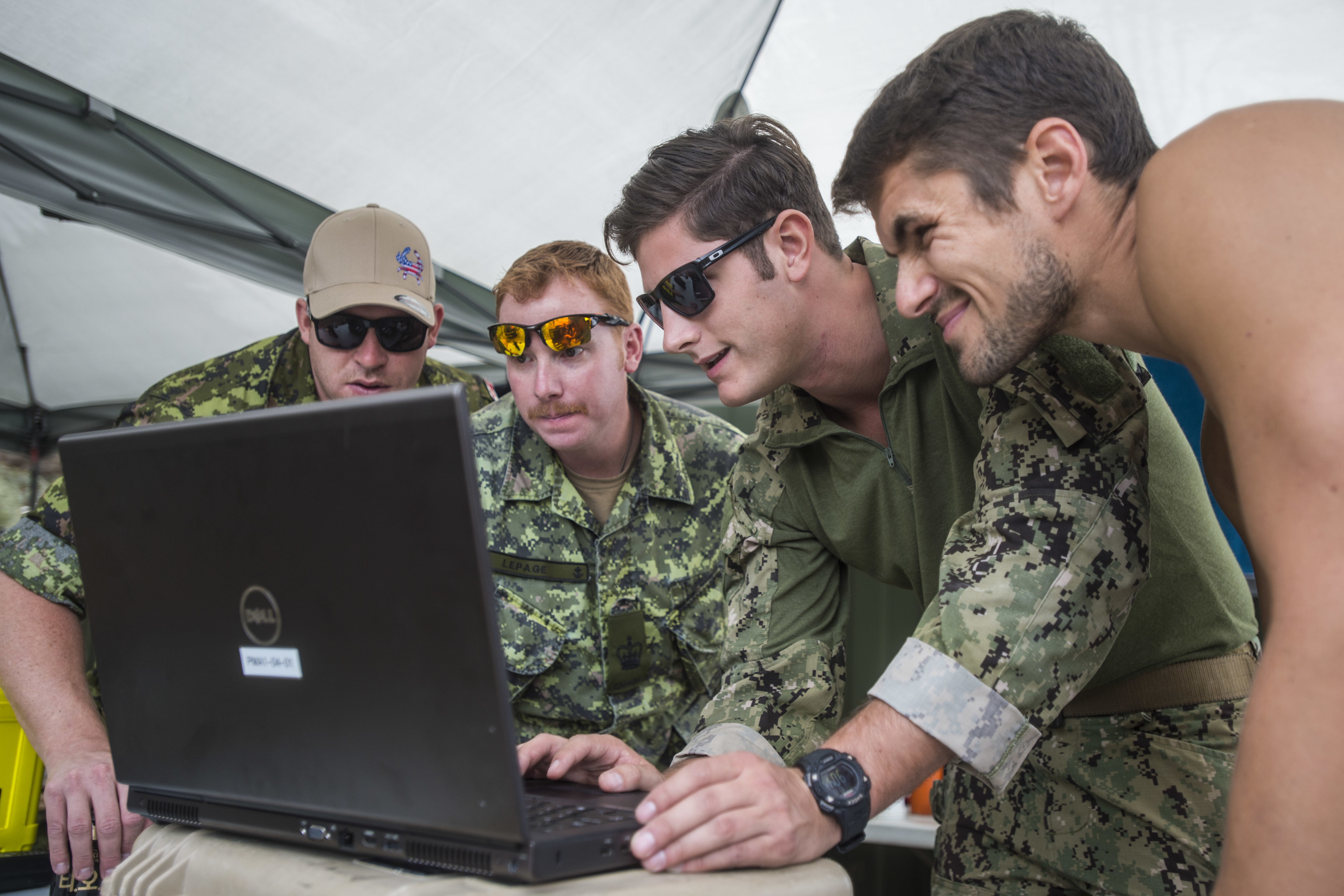 Since fielding the Mk 18 Mod 1 Swordfish in the early 2000s, the community has already benefitted from the larger Mod 2 Kingfish – with its greater payload capacity and longer endurance – as well as natural upgrades in sonar quality, the addition of forward-looking sonars to supplement the original sidescan sonar, and the integration of video cameras to give the post-mission analysis team even more information to work with.

Now, EOD Mobile Unit 1 deputy commander Lt. Cmdr. Michael Simmons said during the interview, the Navy is investing in better autonomy for the UUVs while they are in the water as well as tools to identify potentially interesting sonar and video data during post-mission analysis.

Greater autonomy “would enable the vehicle to make decisions while it’s in the water, and get that level of trust in the vehicle to make the right decisions. If it sees an object of interest, it can make a decision to go back and get a couple more passes so we can better understand what’s there, that saves us time and sending out a second mission to go do that,” Simmons explained, adding that avoiding a second pass by the unmanned systems platoon could keep them out of danger from an adversary or from weather conditions.
“It’s not lost on us how challenging that environment is, whether it’s currents, clutter, obstacles – so vehicle survivability, building that trust where we can let that UUV off leash for long distances and know it’s going to make decisions to move around obstacles, if it gets in extremis with currents to find its way out.”

For example, during the at-sea demonstration USNI News observed, several nearby boats presented a potential danger for the Mk 18 Mod 2 Kingfish as it was getting ready to resurface after its mission. Wheat and Simmons said that was a good example of where increased autonomy could allow the vehicle to sense those nearby boats and decide to pause or to move to another location before surfacing.

Wheat said he hoped to get to a point with the vehicles that they could identify potentially interesting targets and move in closer to collect better data, as well as identify those data points for sailors conducting post-mission analysis to speed up their work. Currently those sailors have to review data at the same speed it was taken, and helping cue them to important data and allow them to skip over other data could save them a great deal of time, he said.

Overall, Wheat said he was pleased the expeditionary mine countermeasures – one third of the Navy’s MCM triad, along with ship-based and helicopter-based MCM work – was growing.

With a call from leadership to be “platform-agnostic and being flexible and adaptable and resilient, we are leading that change in the mine countermeasures community. My very first ship when I was an ensign was an MCM, so I understand very well the constraints, restraints and capabilities of the MCM force, and we are uniquely suited to lead that change to a more modular, scalable, adaptable MCM force in the Navy.”