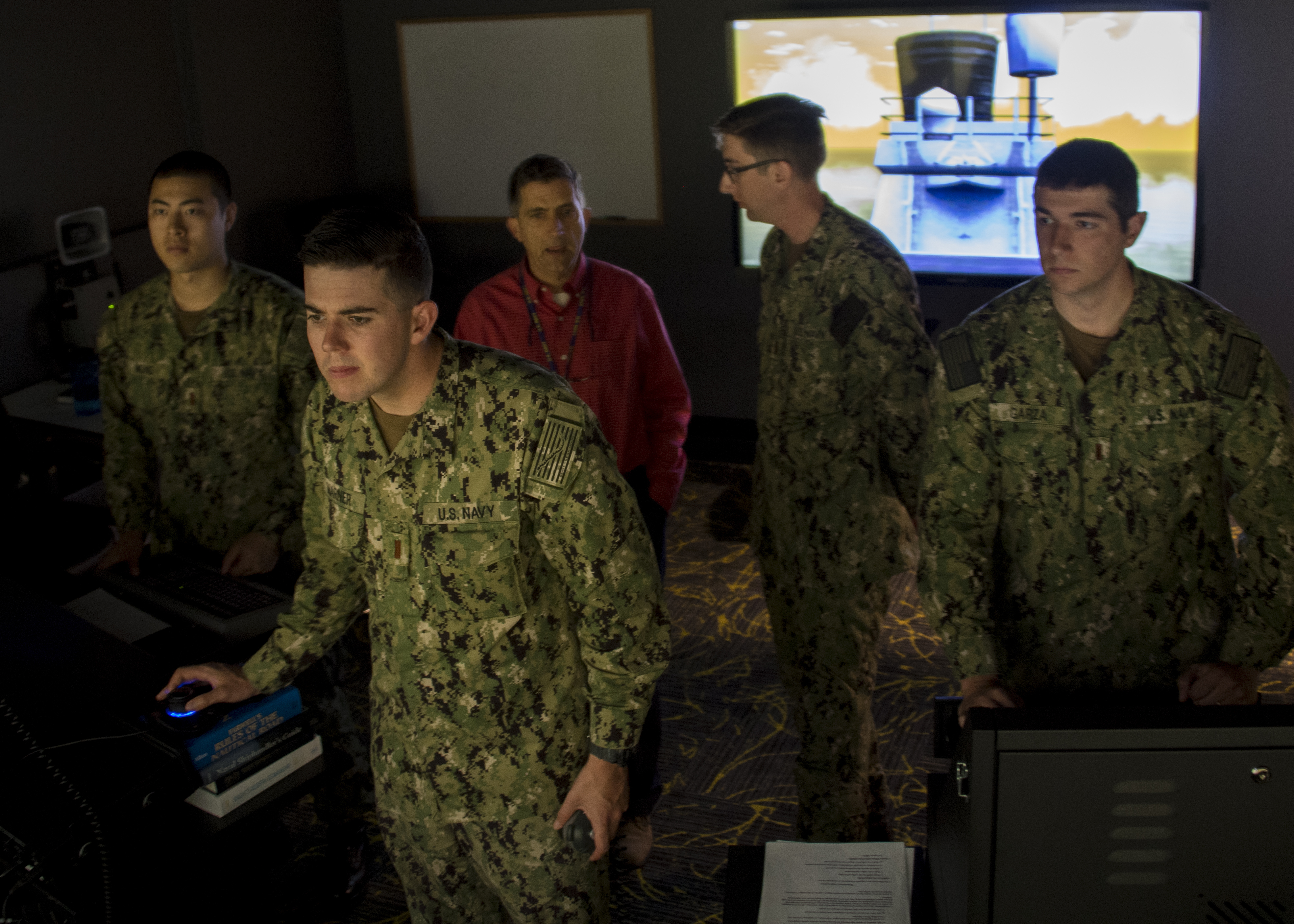 Ensigns Jeffrey Wong, Micheal Marner, Jesse Himes, and David Garza stand watch aboard a simulated bridge during the inaugural Junior Officer of the Deck (JOOD) course at Naval Base San Diego. The four-week course, a new addition to the revised Surface Warfare Officer (SWO) career path, includes training in a broad range of integrated bridge fundamentals. With this course, newly commissioned ensigns now attend both the Basic Division Officer Course (BDOC) and JOOD to prepare them to drive ships and lead Sailors. US Navy photo.

“Are we adequately preparing our officers – that’s O-1 through O-6 – for the higher-level fight?” Capt. Christopher Alexander, commander of the Surface Warfare Officers School Command, told a Naval Base San Diego audience. “That’s a tough question to answer. … And right now we don’t have a perfect answer.”

Alexander spoke about the challenges of individual- to team-level training during a 90-minute panel on “Advancing Warfighting Training – Now & Future” during the Surface Navy Association West symposium. He spoke on a panel alongside two previous commanders of SWOS, which is headquartered at Naval Station Newport, R.I.

The establishment of a maritime warfare training working group “is the key mechanism that we’re looking at to ensure we are preparing our officers for the fight,” he said, noting it will be led by Rear Adm. Scott Robertson, the current commander of the Naval Surface and Mine Warfighting Development Center who commanded SWOS in his last assignment.

Closer to home, “I challenged the team to (ask) what can we do to improve maritime warfare training at SWOS.”

With the stand-up of new Mariner Skills Training Centers, planned for San Diego and Norfolk, “we’re going to have some unique opportunities over the next two or three years to improve those,” he said. The centers will enable SWOS to begin training ensigns “at classified levels.” Once those centers are up and running, with additional mariner skills in the Officer of the Deck (OOD) Course Phase 1 and Phase 2, he added, “we have some potential to free up some time in some other classes, specifically the Advanced Division Officers Course.”

“We can free up maybe eight to 10 days that we can re-purpose from mariner skills training and push it over to maritime warfare training. And I’m challenging the team to come up with a plan to do just that,” Alexander said. “We think, with those changes in place, we’re going to have better officers – more experienced officers – coming into the (Tactical Action Officer) course, which would allow us further to continue to improve that course.”

Some short-term changes already are in place. SWOS officials “took a hard look” at the advanced tactical training and time in simulators where students stand rotational watches, and they came up with a two-day scenario that “has allowed us to increase the simulator time from about 26 hours to almost 45,” he said. That additional hands-on training “will make them better prepared for the TAO watch.”

The schoolhouse, however, grapples with the challenges of resources and time. “We are limited by the number of instructors that we have… the number of trainers that we have,” Alexander said, fielding a question about the biggest challenges in preparing the surface fleet for the future fight. “At the end of the day, you can only do so much training in so many simulators,” he added. “So we are working on it.” 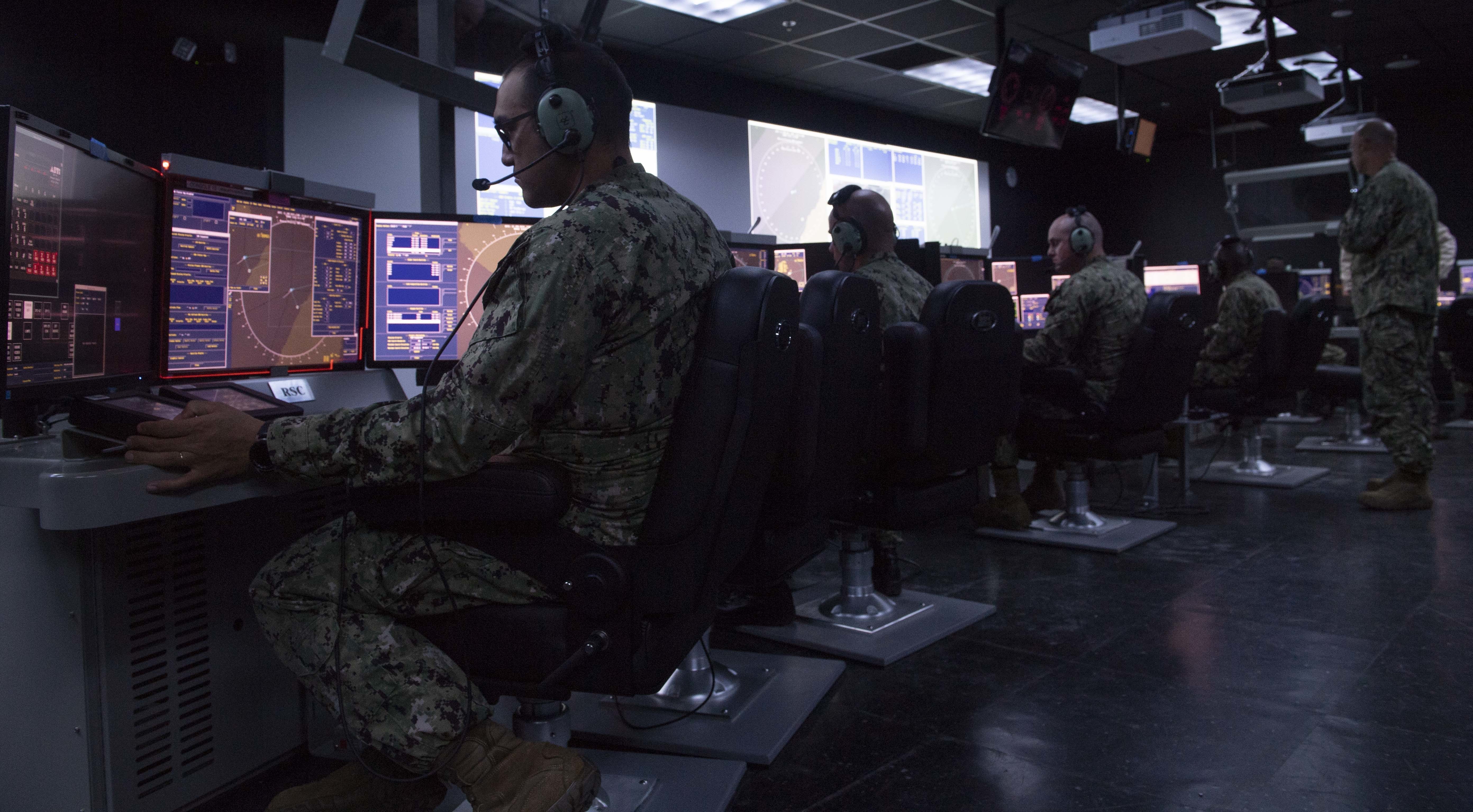 School officials are trying to sort through another concern to ensure mid-grade SWOs are positioned to get the most from advanced training courses. While SWOs attend largely on a scheduled career track and training continuum, the experiences and training level among students in any course can vary, officer to officer.

The Department Head Course, the school’s flagship course, has 13 weeks focused on maritime training, or nearly half of the course, and that includes standing the TAO watch, Alexander said. “The limiting piece of teaching that course is the experience level of the officers.”

In one recent class, for example, one officer fresh off a cruiser tour had served as the fire control officer, completed the Surface Warfare Advanced Tactical Training (SWATT) and Composite Unit Level Training (COMPTUEX), and “is doing a phenomenal job and should be teaching the class,” he said. But another classmate had less fleet experience but is “deeply talented.”

“So consequently, we spend a great deal of time in that class getting officers up to that … basic level, and we are focused on blocking and tackling instead of pushing the ball down the field,” Alexander told the panel. “What we would like to do is try to get to a point where we have all of the officers coming into that class with a similar experience levels and similar background, so we are not teaching to the base level. We are teaching to the base-plus-X, or at a higher level.”

SWOS also is working with the Center for Surface Combat Systems “specifically to stand up a Warfare Coordinator class, such that the goal is every (Advanced Division Officer Course) student, when they graduate from ADOC, they are prepared to go into combat and stand the warfare coordinator position.”