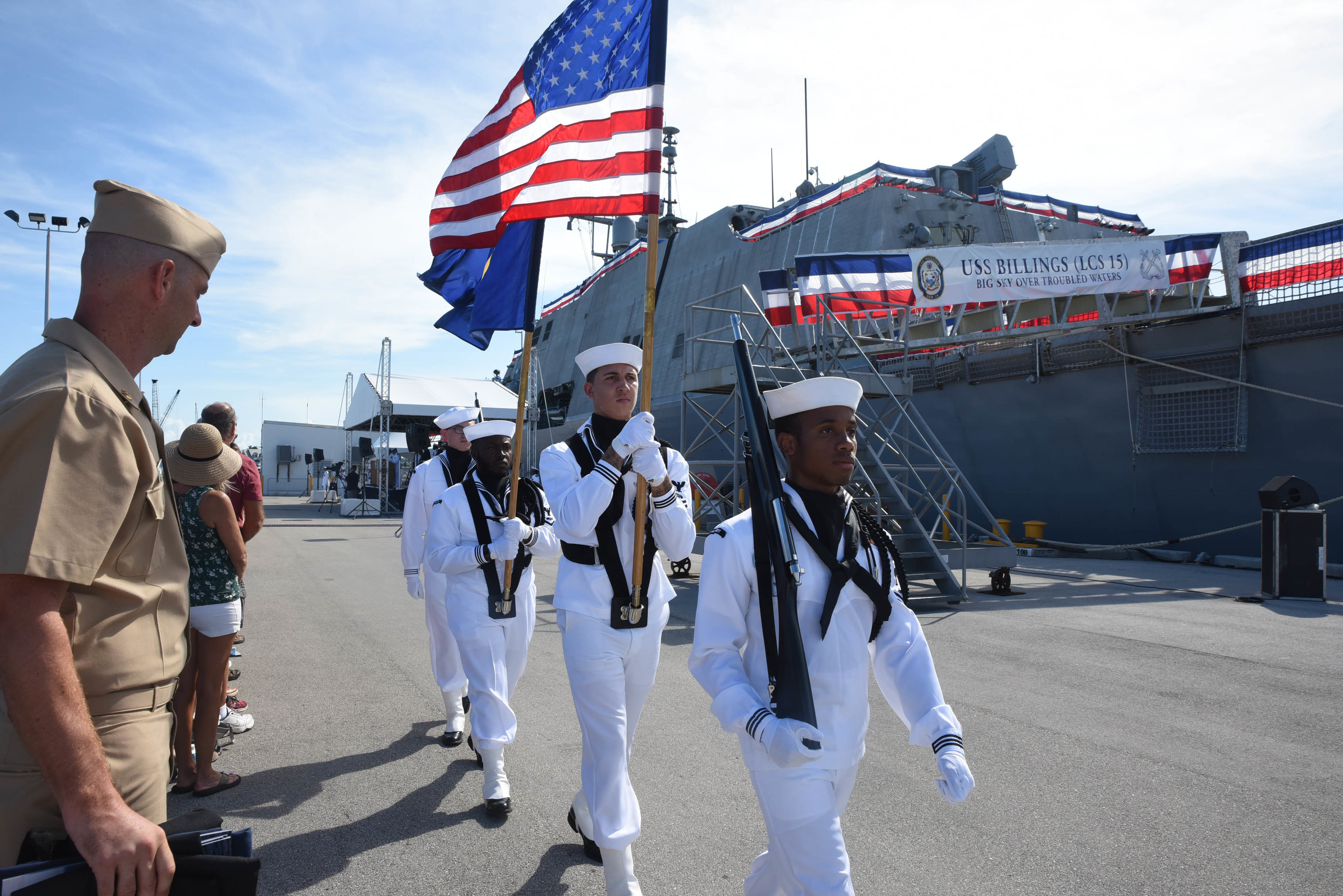 Naval Air Station Key West color guard parades the colors during the commissioning ceremony of USS Billings (LCS-15). Billings is the 17th littoral combat ship to enter the fleet and the eighth of the Freedom-variant. Navy photo

The Navy commissioned USS Billings (LCS-15) at a ceremony in Key West, Fla., over the weekend, adding the eighth Freedom-variant Littoral Combat Ship to fleet.Billings, built by Lockheed Martin, is the Navy’s 17th LCS commissioned by the Navy. However, Billings ran into some difficulty arriving at its commissioning ceremony.

In June, after leaving the Fincantieri Marinette Marine shipyard in Wisconsin, Billings collided with a moored bulk carrier Rosaire Desgagnes in the St. Lawrence River near Montreal, Canada. Billings was steaming to its new homeport of Mayport, Fla.

Billings’ CO Cmdr. Michael Johnson was relieved of command following the incident, and Cmdr. Nate Rowan, who had served as the commanding officer of USS Wichita (LCS-13), took command of the newest LCS.

“Having now commanded two Freedom-class LCS variants, I would like to report that these ships are truly impressive and will fit well in the niche they have been designed for,” Rowan said during the commissioning ceremony, according to a release from Lockheed Martin. “They are fast, maneuverable, and their weapon systems are some of the most accurate I’ve witnessed on any platform of which I’ve previously served.”

The LCS is designed to operate close to shore in shallow water. The Navy is in the process of increasing the lethality of the Freedom variants. In June, the Navy tested firing Hellfire anti-surface missiles from a Freedom variant.

“The USS Billings is a highly maneuverable, lethal, and adaptable force to be reckoned with,” Sen. Jon Tester (D-Mont.) said in a statement. “It’ll represent Montana and our nation proudly in the water by defending us around the world. At a time of new global threats and challenges, these naval capabilities provide critical support to our men and women in uniform who work to keep us safe.”

Tester is the ranking member of the Senate Veterans’ Affairs Committee. His wife Sharla is Billings’ sponsor.