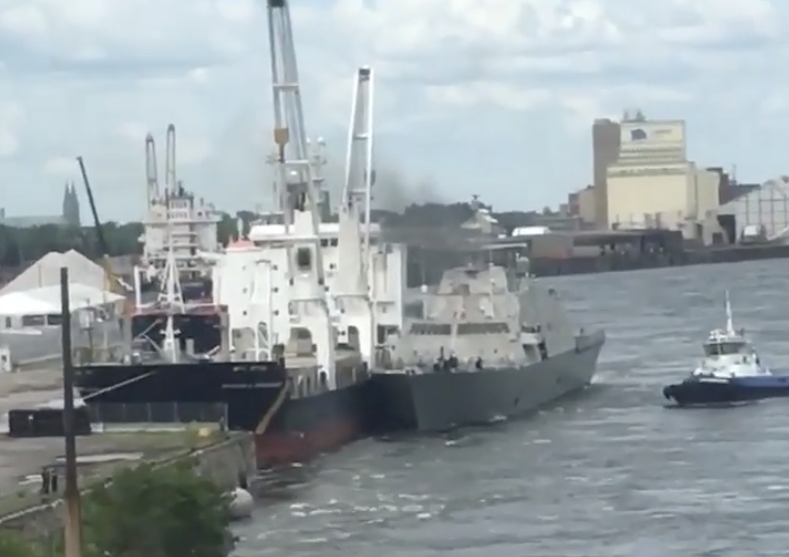 The Freedom-class LCS, delivered to the Navy in February, was leaving its slip when it allided with the bulk carrier Rosaire Desgagnes, according to a video of the incident reviewed by USNI News.

The LCS was under the assistance of two tugs when the starboard side of the warship made contact with the port side of the carrier that was moored at the pier, the Navy said in a Wednesday statement.

Other press reports said the incident occurred after Billings had cut lines with the two tugs.

“While getting underway from Montreal, Canada, the Freedom-variant littoral combat ship, [Billings] allided with a moored commercial vessel at Berth 30, June 21, at approximately 2 p.m.,” Lt. Cmdr. Courtney Hillson told USNI News. “Billings sustained minor damage above the waterline. While the ship is able to safely transit to its homeport, Naval Station Mayport, Fla., the ship will temporarily remain in port in Montreal to conduct a full damage assessment. No injuries were reported from either vessel. An investigation into the incident is ongoing.”

Surface Division 21, under LCS Squadron (LCSRON) 2 based in Mayport, will oversee the investigation into the allision, Hillson said.

This is the second time recently an LCS has had to wait unexpectedly in Montreal. In 2018, USS Little Rock (LCS-9) was stranded for four months in Montreal waiting for St. Lawrence River to thaw after departing its commissioning ceremony in Buffalo, N.Y.