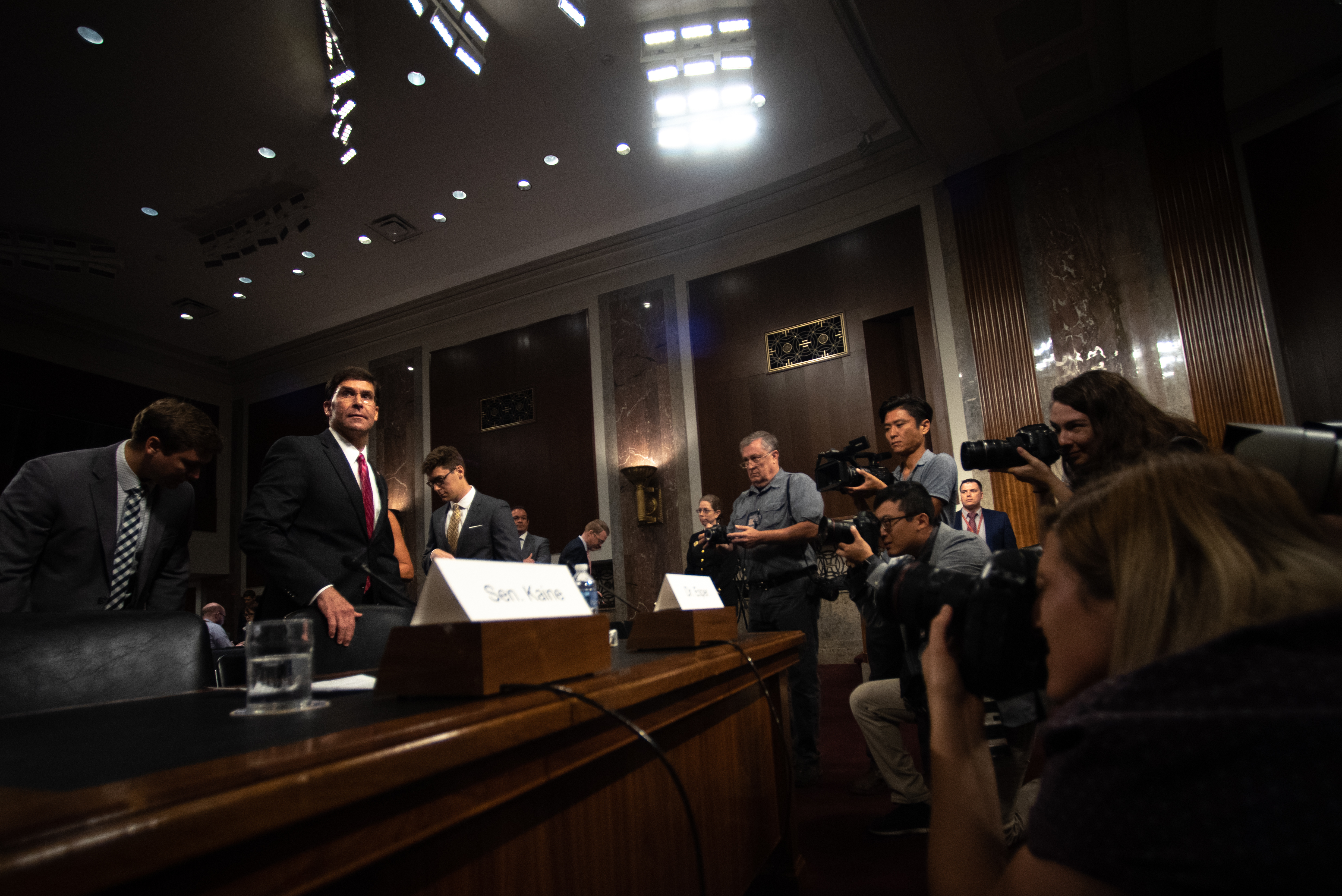 CAPITOL HILL – Maintaining a technological edge, improving the lives of military families and continuing to present potential adversaries with an assured strong U.S. response to hostile acts would be among Secretary of the Army Mark Esper’s priorities if the Senate approves his nomination to lead the Department of Defense.

Esper, during his testimony before the Senate Armed Services Committee Tuesday morning, sought to assuage lawmaker concerns the Defense Department is adrift with several senior civilian positions unfilled and entering its seventh month without a confirmed secretary.

“I’m am an avid supporter of the National Defense Strategy and its clear-eyed assessment of the strategic environment we find ourselves in today,” Esper said during his opening statement. “The growing threats posed by great power competitors such as China and Russia warrant a re-focus to high-intensity conflict across all of the military services. This requires us to modernize our forces and capitalize on rapid technological advancements in fields such as artificial intelligence, robotics, directed energy and hypersonics.”

Specifically, Esper said his top priorities would be maintaining and upgrading the nation’s nuclear triad, filling the Pentagon’s vacant senior positions, improving the military’s cyber capabilities, bulking up its conventional technologies and reforming its business activities.

Esper highlighted a few weapons programs he said are critical for the military. The programs include the F-35 Lightning II Joint Strike Fighters, the Columbia-class submarine to replace the aging Ohio-class ballistic missile SSBNs, and the need to acquire more amphibious assault ships for the Marine Corps.

Along with filling vacancies at the top of the Pentagon’s organizational chart, Esper said he would also focus on retaining military personnel throughout the ranks. A key component, he said, is addressing the needs of military families, notably housing and affordable childcare.

“As a personal priority of mine, I intend to place particular focus on the wellbeing of our soldiers, sailors, airmen and Marines and their families. I understand very well the impact that issues such as housing, childcare and spousal employment have on the readiness of our service members,” Esper said.

Several lawmakers asked Esper to detail how he sees the department countering growing threats posed by China and Russia and, to a lesser extent, Iran, North Korea and non-state actors such as terrorist organizations.

An advantage the U.S. has that China and Russia don’t is the ability to work with partner nations to create coalitions. China is using financial pressure to gain influence among nations.

An example, Esper said, is occurring now in the Persian Gulf, Strait of Hormuz and the Gulf of Oman. The program, dubbed “Sentinel,” calls for oil-producing nations and shipping lines to cooperate with navies operating in the region to monitor and discourage threatening acts made by Iran or forces connected to the regime in Tehran. Secretary of State Mike Pompeo pitched the idea to gulf states during his recent visit to the region, according to media reports.

“We do passive patrolling, if you will, in the Strait of Hormuz, Gulf of Oman and Persian Gulf to deter any provocative acts by the Iranians or the IRGC (Islamic Revolutionary Guard Corps),” Esper said. “We deter provocation or miscalculation.”

Esper, a 1986 graduate of the U.S. Military Academy, is the current secretary of the Army. He spent 10 years serving on active duty and 11 years in the National Guard and Army Reserves before retiring in 2007. He was nominated by President Donald Trump to become secretary of defense after acting secretary Patrick Shanahan withdrew his nomination to take over the Pentagon’s top spot. Shanahan withdrew from consideration after reports of a 2010 domestic violence incident surfaced involving his son and ex-wife.

A couple of senators lauded Esper’s private sector experience as the top lobbyist for large defense contractor Raytheon. They viewed a business background as a plus to help the Pentagon run more efficiently.

However, not every senator saw Esper’s lobbying as a bonus to his resume. Sen. Elizabeth Warren (D-Mass.) expressed her concerns over Esper’s deferred compensation package from Raytheon and the appearance of him receiving at least $1 million from a company actively doing business with the Department of Defense. These are payments Esper is due for work he already performed for the Raytheon.

Adding to the complication of Esper’s relationship with Raytheon, the company is currently in the process of being acquired by United Technologies. Raytheon builds missiles and air and missile defense systems such as the AN/SPY-6 radar, an integral component of the new Flight III Arleigh Burke-class guided-missile destroyers. The United Technologies’ Pratt & Whitney subsidiary builds jet engines, such as those used by all variants of the F-35 Lightning II Joint Strike Fighter. The combined company, to be called Raytheon Technologies, would be the second-largest defense contractor once the merger takes place.

Esper is currently working under a two-year ban from being involved in Pentagon negotiations or contracts involving Raytheon. However, this two-year period started when Esper became secretary of the Army and is due to expire in November.

Warren asked Esper if he would consider extending the policy of recusing himself from deals involving Raytheon. Esper countered by citing the department’s robust vetting process and said, “on the advice of our ethics folks at the Pentagon, the recommendation is not to.”

Warren also asked Esper to commit to not asking for an ethics waiver to participate in deals involving Raytheon, even if the current two-year recusal was still in effect or if he opted to further recuse himself.

“No, Senator I won’t, because I’m going to continue to abide by the rules and regulations,” Esper said but described the Pentagon’s robust screening process and his ethical code that will prevent him from inappropriately dealing with Raytheon.