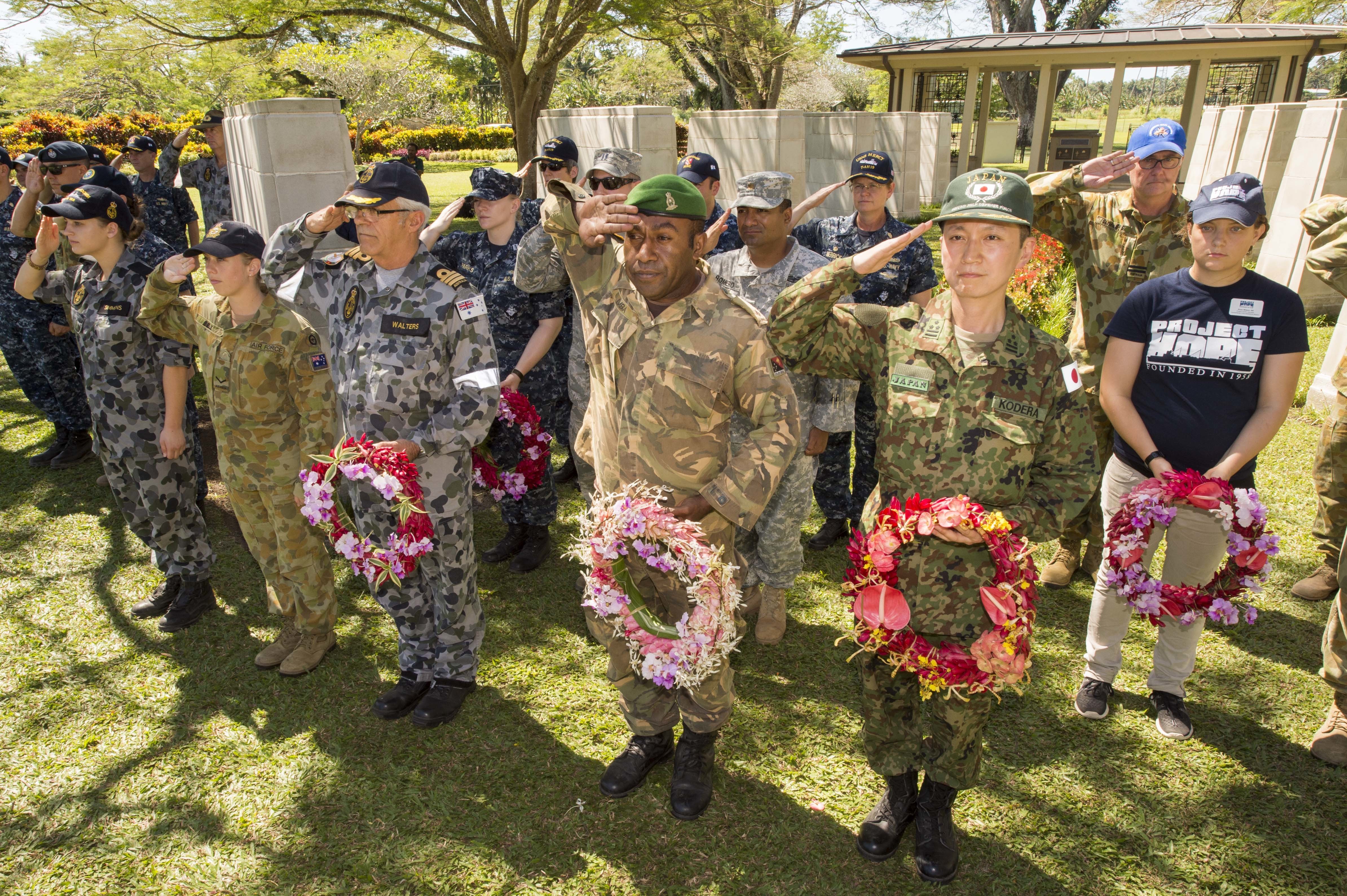 Service members render honors during a ceremony at the Rabaul (Bita Paka) War Cemetery on July 7, 2015. Service members from the U.S., Australia, Papua New Guinea, New Zealand and Japan and civilians from non-governmental organizations assigned to the Military Sealift Command hospital ship USNS Mercy (T-AH 19) visited the cemetery to lay wreaths and pay respects to those fallen during the World War II battles and other conflicts in the region. US Navy photo.

Political volatility in Australia does not appear to threaten the country’s military and economic relationship with the United States, a panel agreed, partly because of concerns about Chinese economic and military ambitions in Oceania and Asia.

Speaking Thursday at the Center for Strategic and International Studies,

Jacob Greber, a correspondent for the Australian Financial Review based in the United States, said at the event he expected Australia’s ties with the U.S. to remain “very much of the same” even after the recent election.

Patrick Buchan, director of the U.S. Alliances Project at CSIS, added that the outcome had to be viewed favorably by the Trump Administration.

“The U.S. looks to countries like Japan and Australia for stability” in the region economically, diplomatically and militarily, he said, and this recent vote delivered that.

As a sign of continuity in security, the Australian-born Buchan said Morrison is likely to pick Linda Reynolds, a senator from the western part of the country, to be his defense minister. She was the first woman promoted to brigadier in Australia’s Army Reserve and served as the second-ranking official in the ministry before the election.

But to whether Japan, India, Australia and the United States – known as the Quad – would become an “Asian NATO” in the foreseeable future to counter China, he said, “we know that isn’t going to happen.” He did see “a real opportunity” to show to other nations in the Indo-Pacific that the four “stand together” on values from democracy to trade, education and economic development and “push back” against an ambitious China in a number of arenas.

Both the United States and Australia view China’s ambitions with its One Belt/One Road development and infrastructure efforts in the same way, the panelists agreed.

“If you give a great power an inch, they’ll take a mile,” Buchan said. Beijing’s now global initiative “is not just an infrastructure development effort,” but is designed to wield influence in the country that accepts the investment.

As a counter, he suggested that potential American, Australian, New Zealand, Japanese and Korean investors avoid the top-down model that China uses for Belt and Road. “Listening to the region … particularly the South Pacific islands” regarding their own development needs is important. There also needs to be a recognition of their concerns over climate change, Buchan added.

The panelists cited Naivakarurubulavu Solo Mara, Fiji’s ambassador, remarks at a recent CSIS forum as giving valuable insight into the islanders’ thinking about great power competition and their own needs.

Like much larger nations such as Indonesia and Malaysia, the South Pacific islanders “want to resolve problems for themselves,” Alan Tidwell, a professor at Georgetown University’s School of Foreign Service, said. The U.S. and its larger Pacific partners have had “episodic engagement” with these countries when it comes to investment and security presence. As a result, the smaller nations feel they have been treated as “the flavor of the month.”

Across the Indo-Pacific, the five democratic nations “are the preferred partners [for development and security], but you have to be there” for more regular interactions to build the relationships, Tidwell said.