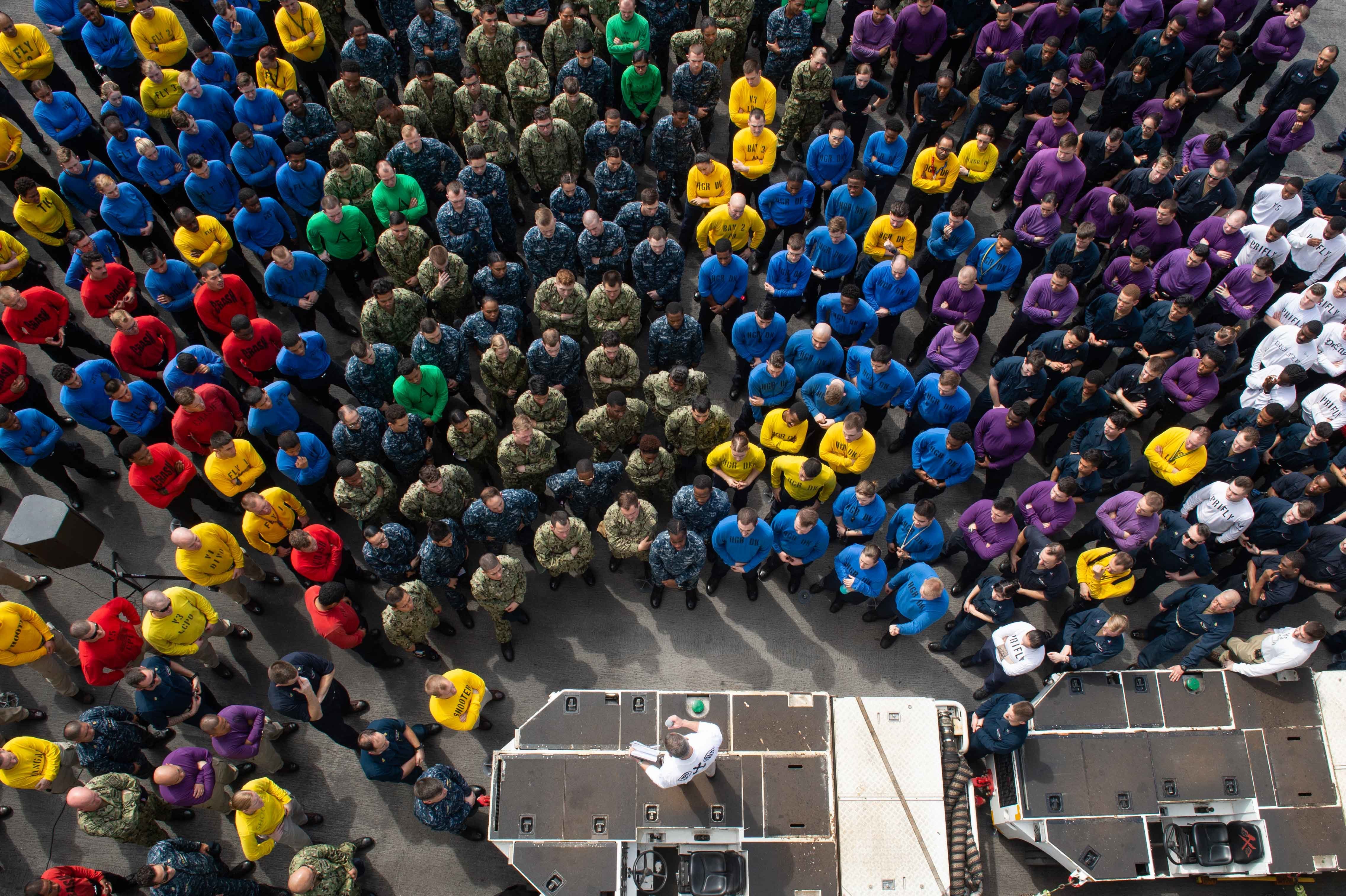 Cmdr. Pavao Huldisch, head of the Air department aboard USS John C. Stennis (CVN-74), addresses sailors on the flight deck during a department quarters on Nov. 23, 2018. US Navy Photo

The Navy needs to retain for the foreseeable future close to 80 percent of its first-term sailors reaching the end of their initial enlistment contracts if it hopes to meet staffing requirements of its growing fleet, the service’s personnel chief told lawmakers on Thursday.

The Navy is on track grow by 7,500 active duty personnel this year and by 5,000 sailors each year through Fiscal Year 2024, Chief of Naval Personnel Vice Adm. Robert Burke told the House Armed Services subcommittee on military personnel. Burke was joined by his counterparts from the Marine Corps, Army and Air Force.

If the Navy meets its recruiting and retentions targets, Burke said the force would be able to adequately staff the 314-ship fleet the Navy anticipates sailing in 2024. The Navy’s FY 2020 budget request calls for a force of 354,000 by 2024.

Predicting the size of a force needed to staff the planned 355-ship Navy is difficult because technology and ship types will likely change during the decades it will take to build such a fleet. Based on Congressional Budget Office predictions and current staffing needs of ships in the fleet, USNI News estimates the Navy ultimately needs to grow to nearly 375,000 active duty personnel. As of Thursday, the service had an end strength of 332,507 officers and enlisted sailors, according to the Navy.

Most sailors initially join on six-year contracts, Burke said. His staff is focused on getting the vast majority of those joining now to re-enlist in the future.

“When we’re at a stable size, we need a roughly around 55 percent retention to that second contract. Right now, we need much higher than that because we’re trying to balance accessions versus retentions because we don’t want a really junior force manning that 355-ship Navy, we want a mix of experienced people, so we need in the 70- to 80-percent region, and we’re in that ballpark now,” Burke said.

All branches of the military are facing the same challenges in recruiting and retaining personnel. A strong economy provides active duty personnel career options outside of uniform which can pay more. Another critical component of retention is considering the changing nature of the force, Burke said.

“67 percent of our officers and over half of our enlisted sailors are married, and many of them are dual-professional couples,” he said. “We have to address that reality if we’re going to retain the family.”

“100 this year and 300 through the rest of the FYDP (future years defense program) and it has to specifically do with providing special operations critical skill enablers,” Rocco said of the Marine Corps’ projected end strength growth.