A pair of expeditionary fast transport ships (EPFs) are playing a key role in this year’s multi-national Pacific Partnership 2019 exercise focused on humanitarian assistance and disaster relief in the region.

The exercise commanders are embarked aboard USNS Brunswick (T-EPF-6) and USNS Fall River (T-EPF-4), providing the latest example of how the Navy is experimenting with new uses for these versatile platforms. The exercise started Monday when Brunswick and Fall River left Guam, according to the Navy.

The EPF is designed to deliver personnel and material – up to 600 short tons of military equipment – at distances up to 1,200 nautical miles at an average speed of 35 knots, according to the Navy. However, the ships also can support medical team and serve as command ships, which are both critical components of providing aid to a humanitarian crisis or natural disasters.

“Pacific Partnership brings nations together to prepare in calm to respond in crisis,” Capt. Randy Van Rossum, the commander for Pacific Partnership 2019 and commodore of Destroyer Squadron 1, said in a statement. “Our mission team, made up of servicemembers and volunteers from around the world, reflects this enduring commitment to the region.” 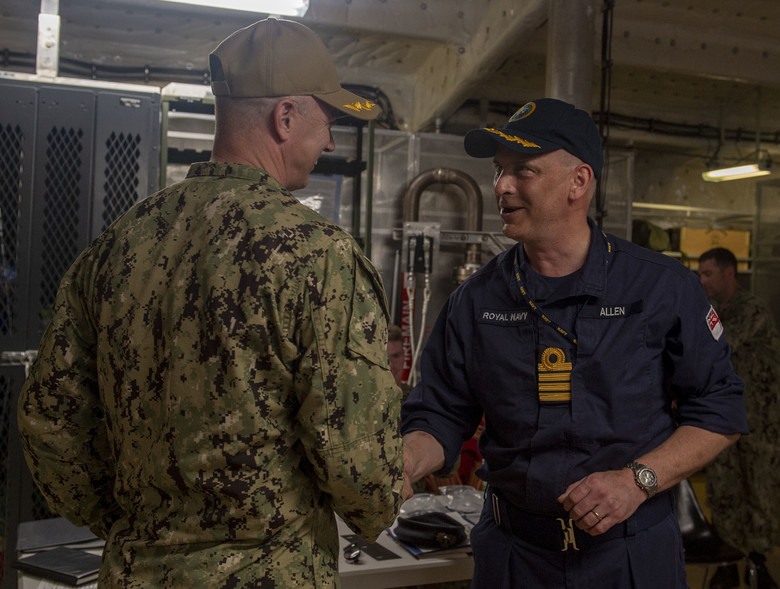 Last year’s Pacific Partnership was conducted using Brunswick and hospital ship USNS Mercy (T-AH-19). This year, only EPFs are being used, a move predicted a year ago by Rear Adm. Don Gabrielson, who then served as the commander of Task Force 73, during an interview with USNI News. The Navy was interested in using the EPF platform as a command ship during exercises or other engagements with Pacific nations, Gabrielson said.

This year’s Pacific Partnership includes more than 500 military and civilian personnel from several Pacific countries. Joining U.S. forces are personnel from Australia, Canada, Japan, Malaysia, Peru, the Philippines, South Korea, Thailand and the United Kingdom, according to the Navy. U.K. Royal Navy Capt. Paddy Allen, the director of mission for Pacific Partnership, is using U.S. ships as a command ship.

“Pacific Partnership is about building trust and sharing knowledge,” Rear Adm. Joey Tynch, the executive agent for Pacific Partnership 2019 and the commander of Task Force 73, said in a statement. “This mission shows that the U.S., our partners and hosts are working together to making this region better prepared for disaster response.”