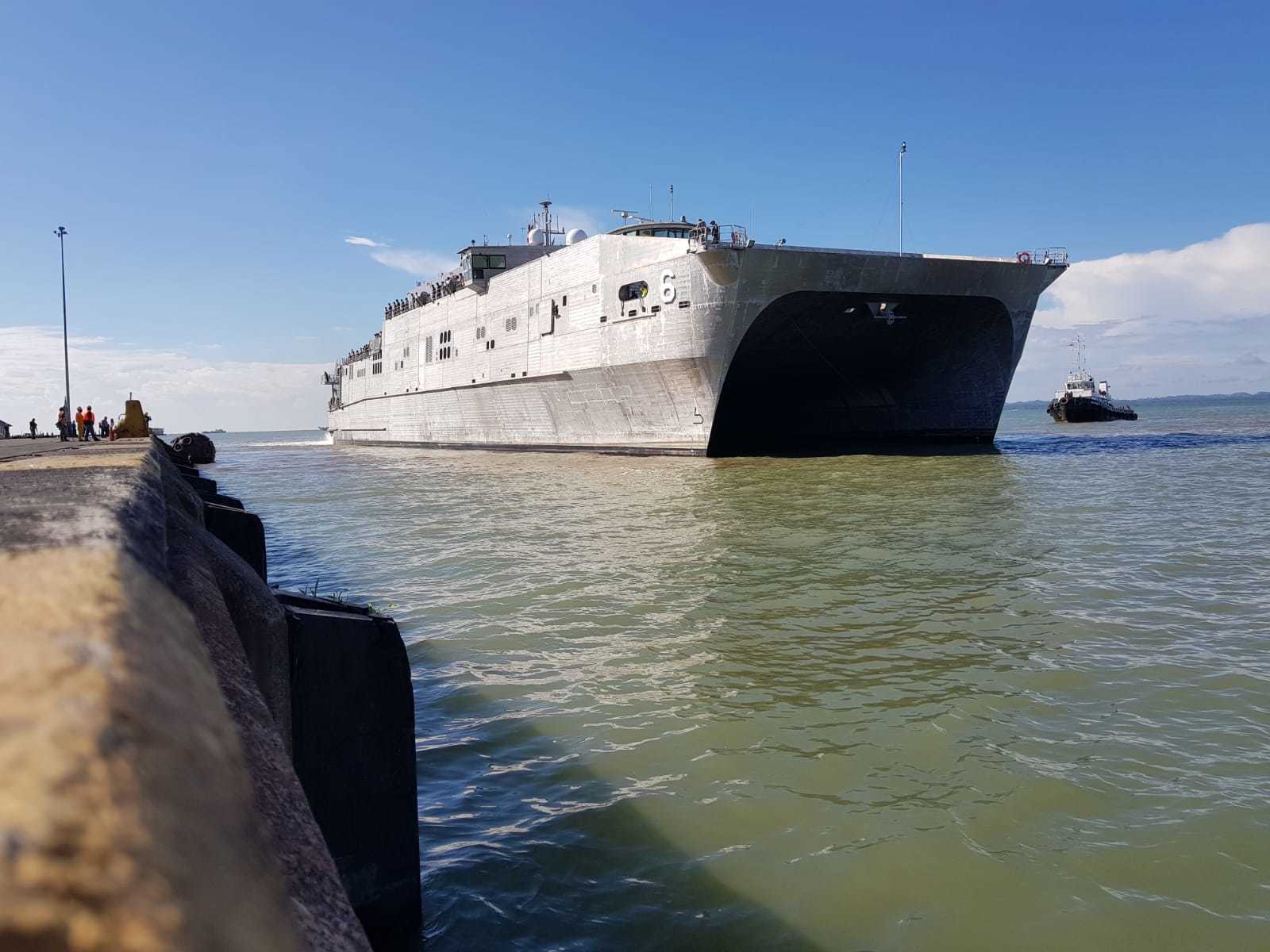 “We are continuing to explore for the United States Navy how to really maximize the utility of the EPF, and we’re finding some really useful missions for these ships,” Gabrielson said.
“These are not new missions, and it’s not surprising in terms of what we can do with the EPF. We now have the ability to get back to a lot of ports and locations with the EPFs and LCSs where we could not go for some time, since we had Perry-class frigates deployed to the region.”

One mission being explored is as a command ship for operations and engagements with regional nations.

“It’s a very good capability and it may apply to many different scenarios for a staff element that requires to go to sea, particularly to places where they need to get there fast or where the waters are only accessible to shallow draft ships,” Gabrielson said.

Gabrielson also discussed the upcoming maritime security exercise SEACAT (South-East Asian Cooperation Against Terrorism) scheduled for this summer, noting, “SEACAT is a great event that brings together the ASEAN countries plus a few additional nations to the table to work on the ability to share information, and to go out to sea to monitor the maritime domain, keep track of the vessels, and go out and board them.”

Three different target vessels will be used for this year’s exercise: two of them will be present throughout the whole exercise, while the third, an EPF, will be used at various stages of the exercise. The two permanent target vessels will spend the duration of the exercise maneuvering throughout the region, and participating nations will share information from their ships, command centers and information nodes as they track the vessels’ movement and conduct visit, board, search and seizure exercises on the target ships.

SEACAT will also involve regional coast guards and maritime enforcement agencies participating alongside the navies of participating nations. While somewhat similar to past SEACAT exercises, Gabrielson said the repetitive nature of regional exercises such as CARAT and SEACAT was important because of the turnover of personnel.

“The crews of these ships turn over each year, so these are routine events for all the nations to work together to get to know each other,” the admiral said.
“So there’s value in doing that every year. And the best part is that we get more and more nations interested and dedicating people to participate,” he said, adding that partner nations see the value of the practical impact of working together, “so that whenever the leadership of their nation sees the need to share information with other nations, whether it be in HA/DR (humanitarian assistance/disaster response) assistance and response, counter-piracy, countering illicit trafficking and other missions, the people tasked to do these operations will know how to work efficiently together once given direction from national authority, and SEACAT creates that ability.”

Touching on the Pacific Partnership 2018 mission, which began in February and is ongoing in the region, Gabrielson said “this mission is really impactful to the region as it does several things: it enables the HA/DR experts in the region to come together and train and gain improved understanding of not just each other and the capabilities and the way they operate but also in the conditions in which they operate in various places around the region,” Gabrielson said.
“The best part of Pacific Partnership is that partner nations choose the locations where we go, they choose the kind of things that we end up doing, and we work together to create very meaningful interactions with the local population to deliver not just valuable training to our people, but we also do things over the course of time, in some case years of working together, where we can make a difference in communities for thousands of people.” 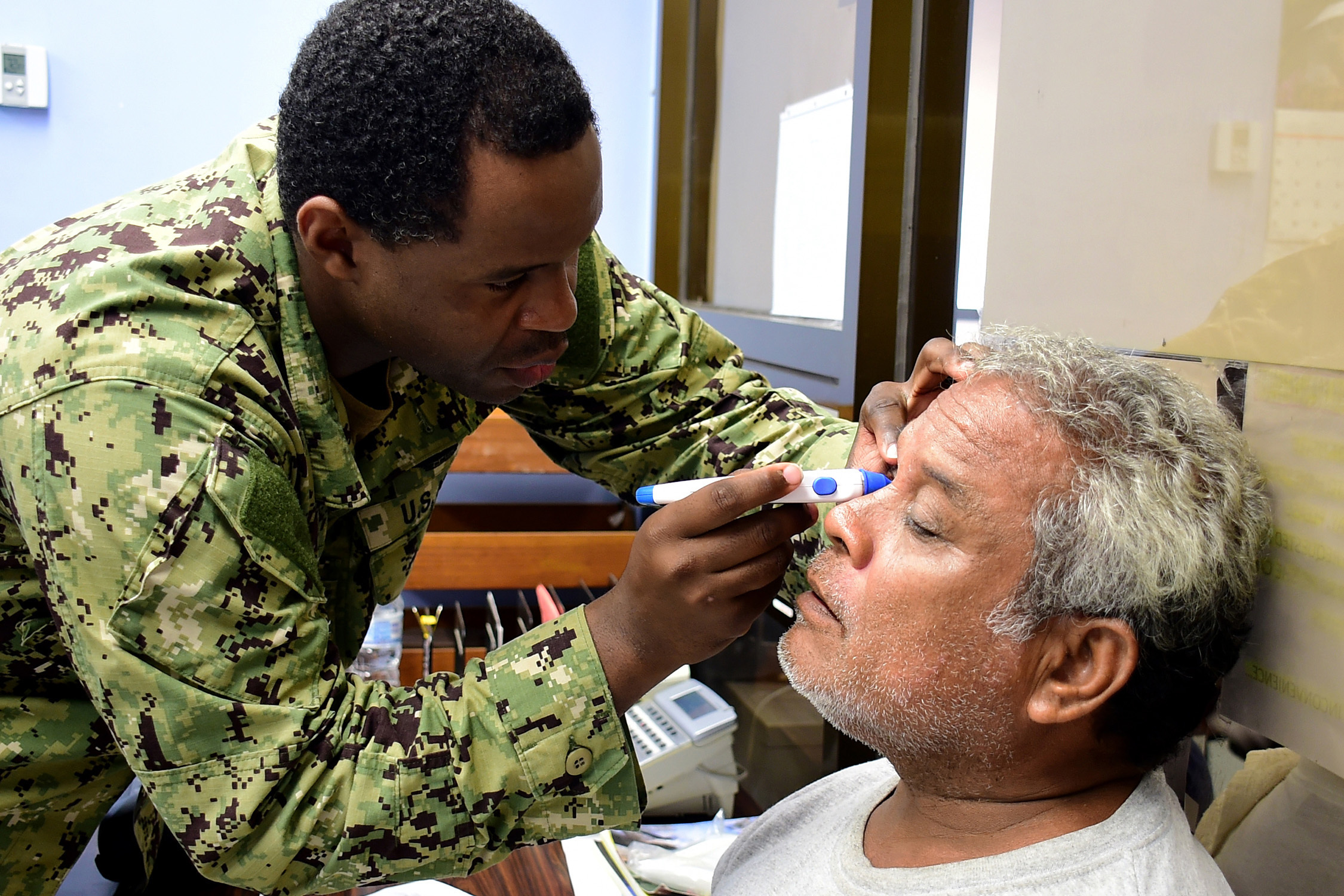 Hospital Corpsman 2nd Class Abokar Mohamed gives an optometry examination to a Yapese patient during a health fair at Yap Memorial Hospital in support of Pacific Partnership (PP) 2018 on March 30, 2018. US Navy photo.

Gabrielson summed up his command’s outlook on their activities in the region, saying “we would welcome more of any kind of ships out here. There are great opportunities for us to work with our partners and maintain the presence that demonstrates the United States’ commitment to the region.”

“We have three EPF ships dedicated to the region here, plus USNS Mercy for Pacific Partnership, along with the other ships that pass through while on deployment,” Gabrielson continued.
“These assets really allow our Navy to make an impact in an important and very strategic location for our nation and the world.”