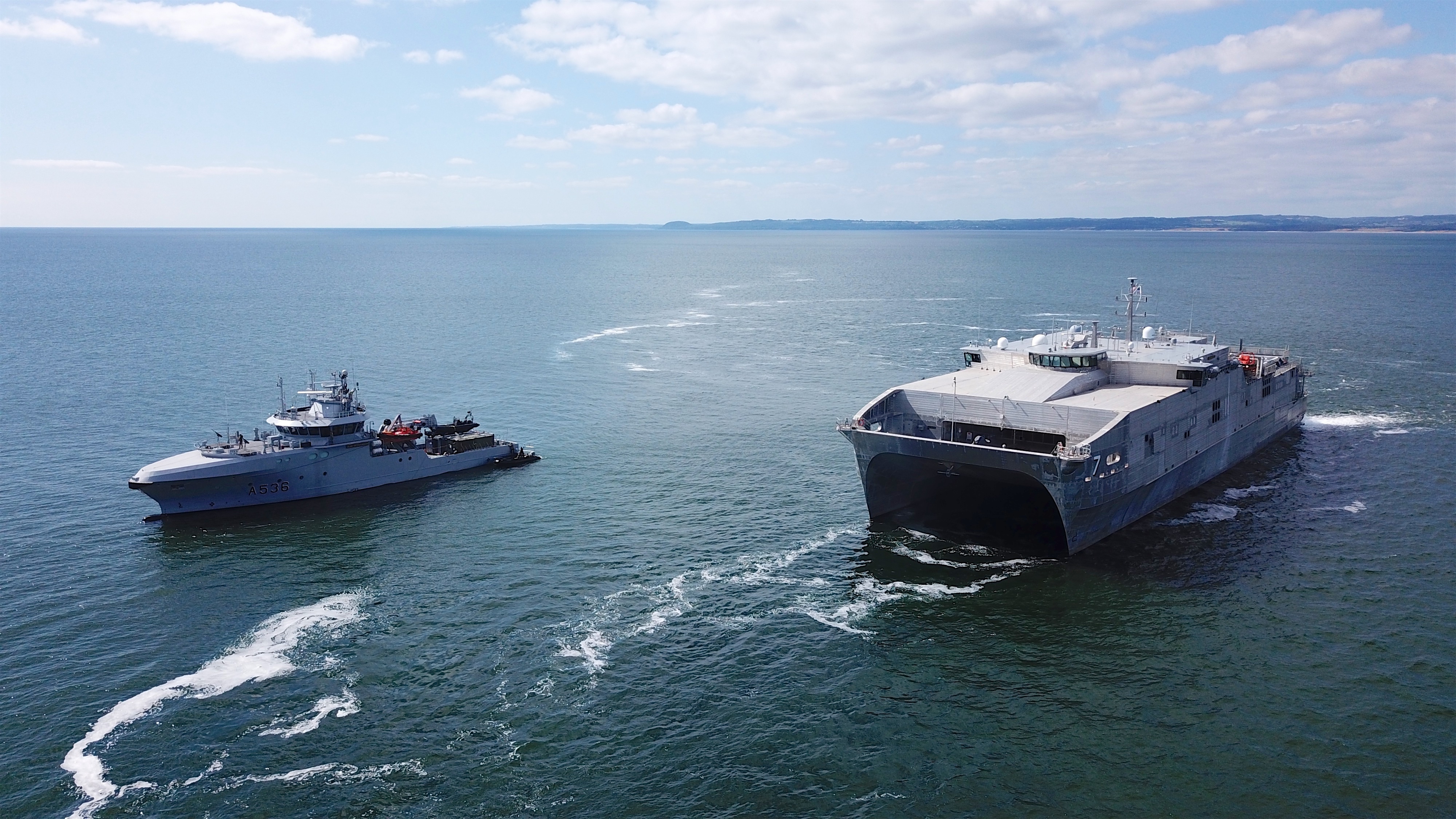 The Navy continues to expand its uses for the Expeditionary Fast Transport class of ships, as USNS Carson City (T-EPF-7) last month conducted the first high-latitude operations and the first mine countermeasures mission for the ship class.

Carson City joined in the multinational Baltic Operations (BALTOPS) exercise last month, deploying Remus-100 and Remus-600 unmanned underwater vehicles (UUVs) to conduct mine countermeasures work, and coordinating with other countries’ MCM boats through a command and control suite installed on the ship.

Cmdr. Steven Weydert, the Carson City military detachment officer in charge, told USNI News in a June 21 phone interview that it was encouraging “coming together to creatively figure out how to successfully complete the mission and to deal with the challenges that arose. … From my perspective, it just adds another … capability to the ship as we prepare for our next mission.”

The EPF ships are meant to provide high-speed personnel and equipment transport, with an eye towards humanitarian assistance and disaster relief missions, evacuations and other missions on the lower end of warfare. The U.S. Navy’s Logistics Group Western Pacific/Task Force 73 is considering using the platform as a command ship in the region – but the BALTOPS mission for EPF took that idea to a new level, providing command and control of a task unit conducting mine countermeasures, and even deploying MCM UUVs from the EPF. 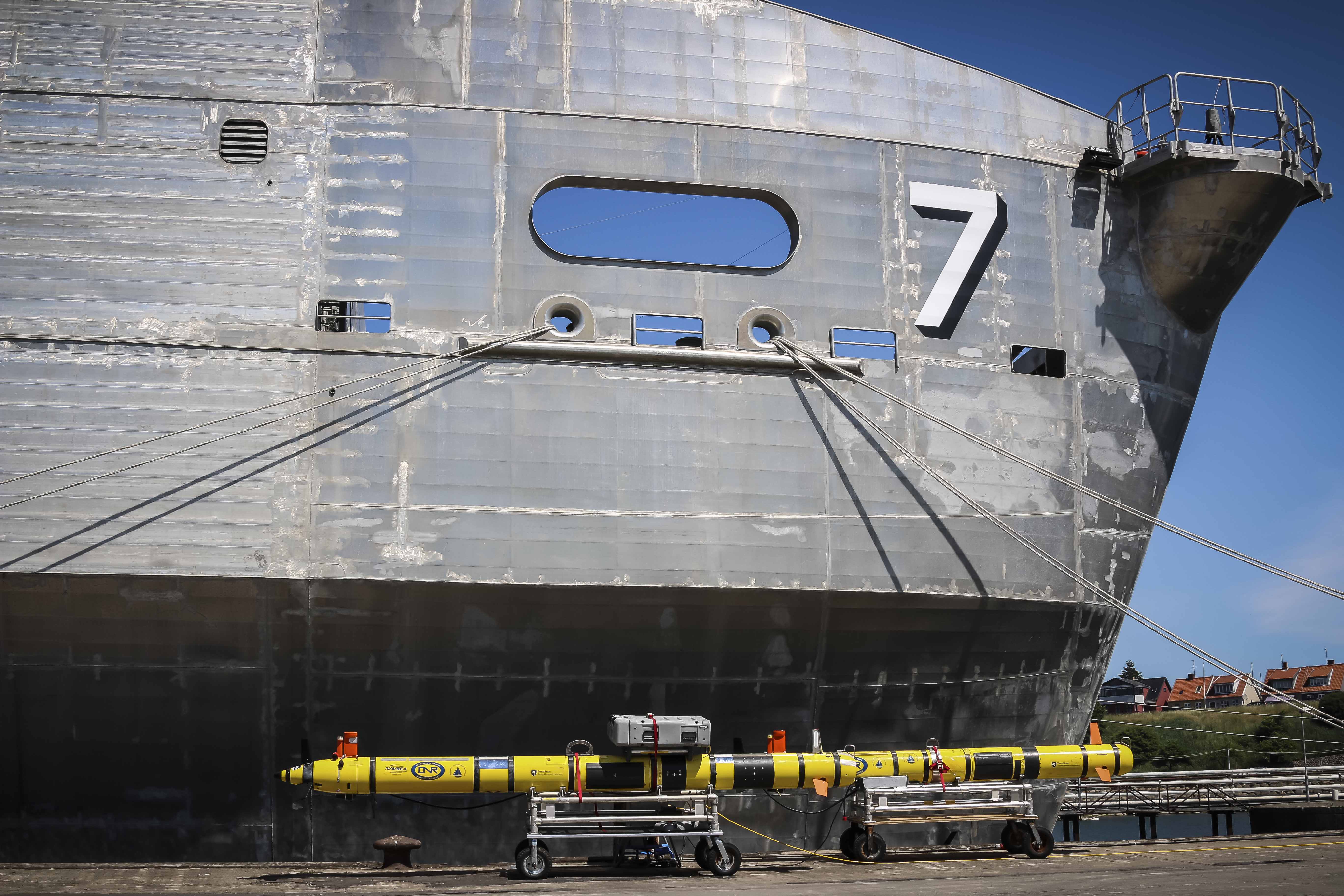 Capt. Jonathan Keffer, the civilian master of the Military Sealift Command-operated Carson City, said in the same interview that the EPF is “a blank canvas: not only does it move equipment quickly from A to B, but also there’s spaces within the ship that can be utilized as an operations center, there’s other spaces that can be utilized – a large bay to move people maybe in a non-combatant evacuation operation kind of scenario. That same space could even be turned into some type of medical triage point.”

Keffer noted the ship requires additional gear and personnel to take on specialized mission sets, but he said the effort went well during BALTOPS.

“We think from a command and control and intelligence perspective that the ship has essentially a space that allows roughly 20 people to do an operations center, planning – really allow a commander to come onboard and do command and control from this space,” he said. That space was outfitted with a mobile communications package that allowed for secure and non-secure voice and data communications, and an Expeditionary MCM company was able to come onboard and leverage the vast space and the communications package onboard to direct a portion of the MCM exercise.

Lt Cmdr. Richard Vaughn, the deputy commander of the new Task Group 68.3 – which conducts mine countermeasures in U.S. 6th Fleet and falls under Commander of Task Force 68 – said in the interview that integrating the communication suite with the ship was not a simple plug-and-play effort. Successfully integrating the suite, packaged in a container and meant to be operated from a tent ashore, required “a pretty robust site survey and demonstration before we deployed the equipment to the ship months in advance of BALTOPs, to really test it all out. If we hadn’t done that it would be very challenging during BALTOPS to do it for the first time.”

He said the EPFs have a lot of space and potential for new missions, but “if they’re going to be used for things outside of a transport capacity, it’s going to take site surveys and potentially [modifications] or something like that when the ship’s in port, depending on who the customer is and what their desire is.” 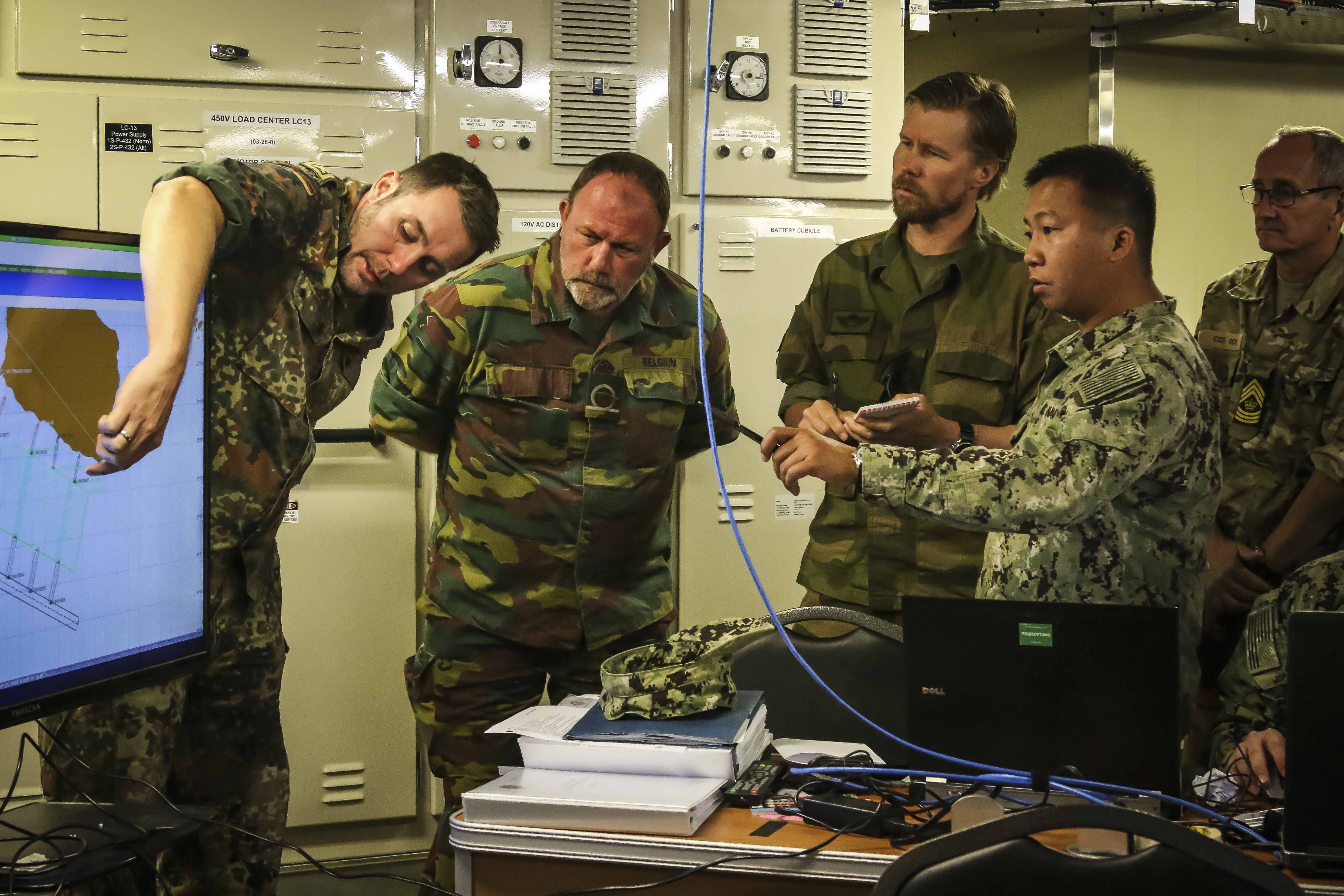 Still, the ship proved successful in yet another mission for which the ship was not built but could be called upon to conduct in the future. The Navy has previously kicked around the idea of using the EPF to host unmanned platforms; to conduct intelligence, surveillance and reconnaissance (ISR); or to serve as an afloat command center, though none of the ideas have been formalized into any training or acquisition effort.

The BALTOPS exercise also proved that the EPF – an aluminum catamaran vessel with a somewhat limited safe operating envelop as a result – could operate in a new geographical environment. Earlier this year three EPFs were operating in the Pacific, and they have also done some work in Africa and Latin America. But, Keffer was eager to note, EPFs have never spent much time in cold and harsh environments like the North Atlantic. With a 2,000-mile voyage from its homeport of Rota, Spain, to Bornholm Island in Denmark, “Carson City has gone further north executing a mission than any of the other EPFs that are also expanding their exercise influence and operations around the world,” Keffer said.

“It was really exciting to be operating so far north, going to new ports – we went to I think two new ports and operated in the Baltic Sea, that no EPF has ever done yet,” he continued, noting that the ship stopped in Eckernförde, Germany, in addition to Bornholm.

Being an aluminum catamaran limits what ports the ship can go to, Keffer said, and the smaller safe operating envelop created some challenges – but he said the ship’s sprint speeds also helped compensate for those challenges. 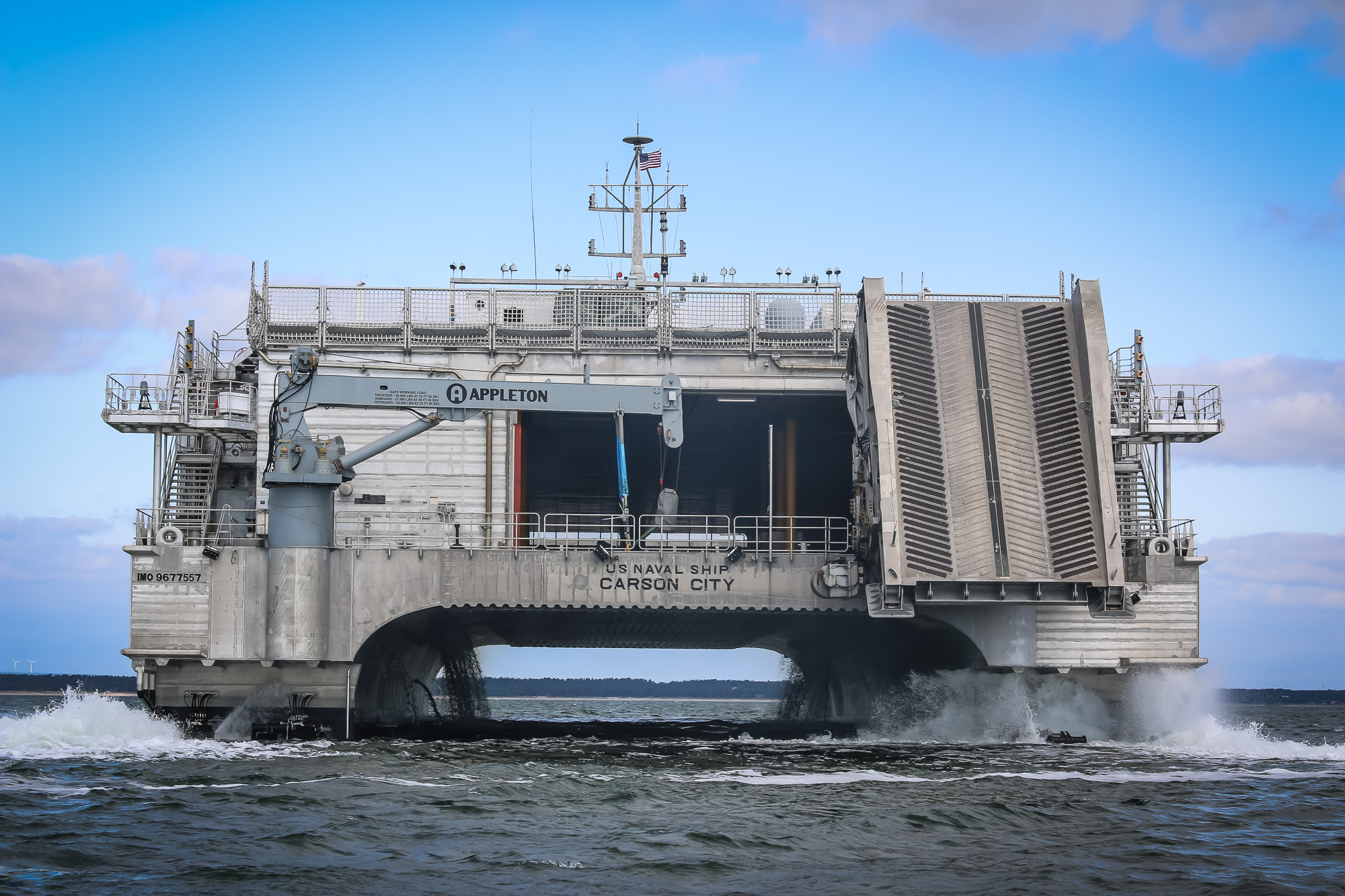 Keffer described “departing Rota and going over 2,000 miles, up through the English Channel, high traffic density, fog, restricted visibility, high winds, North Atlantic weather systems.” He said the the Fleet Weather Center in Norfolk helped provide an optimum track ship routing and was in constant contact with the ship to advise about any changes to the weather forecast.

“Getting up there was nice because it was beautiful spring weather in the Baltic. And then on the way home the Fleet Weather Center warned us about heavy weather in the middle of the North Atlantic that was going to be exceeding our safe operating envelop for high waves, which the hull form can’t handle very high waves,” Keffer said.
“Basically they advised us as we were coming south through the English Channel, again with more fog and challenges therein, but the ship did well. The officers operating the ship gained a tremendous amount of experience. The Fleet Weather Center advised us to hang back almost 12 hours behind our planned intended movement, so we slowed down to allow that weather system to sort of abate, and then the beauty of the ship was, as soon as we slowed down to hang back a bit, the weather began to improve, and we were able to throttle down and run at 24 knots to get to port on time. So with the limitations of the vessel, the capability of high speed made the whole voyage manageable with full consideration and respect for the wind and seas.”