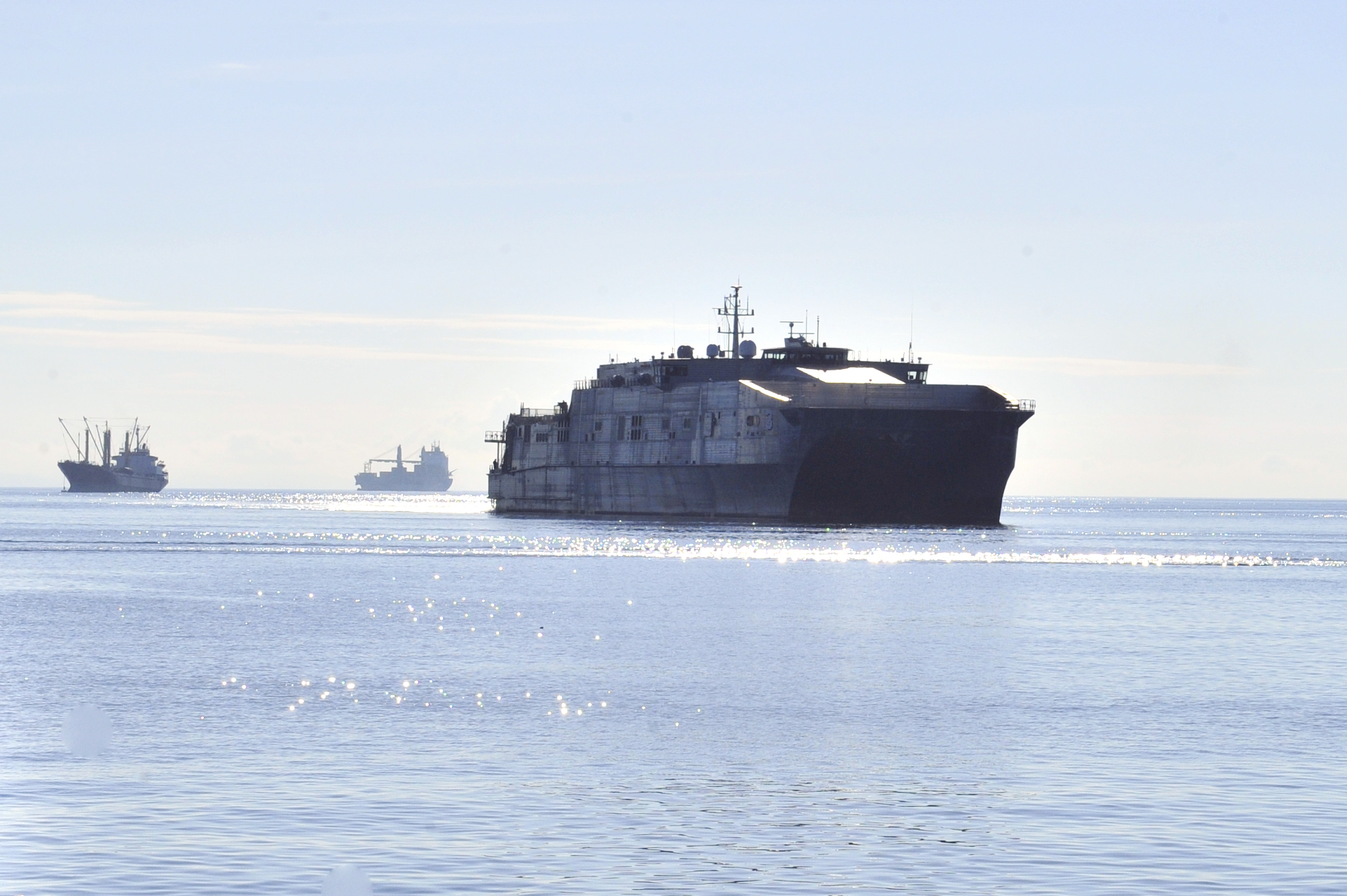 The Auxiliary Platforms and Payloads Council at the Pentagon has focused its efforts on using the Expeditionary Fast Transport for Marines’ afloat command and control requirements, as well as looking at technical enablers to allow Marines to operate from the Littoral Combat Ship, the head of the amphibious warfare branch said last week.

Capt. Bryon Johnson said at the National Defense Industrial Association’s annual Expeditionary Warfare Conference in Portsmouth, Va., that the council was not considering a formal Marine Corps mission package for the LCS but instead was looking at more ad hoc adaptive force packages for LCS and the Expeditionary Fast Transport ship (EPF), formerly called the Joint High Speed Vessel.

A particular interest is putting intelligence, surveillance and reconnaissance (ISR) assets and unmanned vehicles on the EPF, he said.

“We are looking at ways to put adaptive force packages on [EPF], particularly for command and control … using the [EPF] maybe as an afloat command center” in humanitarian assistance missions, for example.

On LCS, he said the council is examining what enablers the Marines would need to operate from the platform – with extra berthing being a top concern, he said.

However, he made clear that these efforts were not meant to replace amphibious warships, but rather to help reduce the high demand on the amphibs.

“No matter how much we want to put adaptive force packages on alternative platforms, they don’t do the same things as L-class ships and they never will, it’s not our intent to do that,” Johnson said.
“But these auxiliary platforms are extremely capable, and there are many things they can do at the lower end of the range of military operations; why not leverage that capability? If you’re talking about doing a theater security cooperation event” with a country that doesn’t have a sophisticated amphibious capability itself, “an auxiliary platform is perfect for that. You don’t need to take a billion-dollar warship away from combatant commander tasking to do a small, low-level mission like that.”

Maj. Gen. Chris Owens, director of expeditionary warfare (OPNAV N95) said at the same conference that the real benefit of putting expeditionary forces on alternative platforms is to allow the amphibious ships to undergo much-needed maintenance and modernization while still filling the combatant commanders’ global requirements.

After operating the amphibious ships at surge level for years, he said “we’re still pushing out there, and now frankly we’re struggling to make a sustained rate because we’ve got this bow wave of maintenance and modernization requirements for each of these ships before they go out again. So almost every time, the fleet commander is faced with a decision” of making up some of that backlogged work and pushing into the crew’s training period, or skipping the work again.

“As an expeditionary force with the Navy and the Marines that are aboard them, we have to be able to do the humanitarian assistance stuff today, the partnership building stuff today, every day, and be ready for the high end,” Owens said.
“These auxiliary platforms are giving us some slack in being able to get Marines and sailors out to do some of these low-end missions, which gives us a little bit of a breather for our amphibs to restore them, to repair them, to modernize them for the next higher-end threat and for those regular patrols that we send them out on.”

Owens said the EPF “has a lot of potential. We know it works really well as an intra-theater transport for personnel and equipment, but we’re just scratching the surface on what else can it do.”

He also noted the new Expeditionary Mobile Base (ESB), formerly called the Afloat Forward Staging Base, was a big hit with combatant commanders who are eager for an opportunity to find ways to employ the new ship class.

Speaking of the lead ship in the class, USNS Lewis B. Puller (T-ESB-3), he said “the demand for that right now is so high, [U.S. Central Command] has got their hooks in this one but both the [U.S. European Command] and [U.S. Africa Command] commander are asking for that ship, and if not that, they’re getting their bids in early to get the next one committed to them. They know they can employ it nearly full time.”

“There’s three reasons why they will never and should never replace naval warships. One is, the redundant damage-resistant designs of our naval warships, the second is the self-protection capability of our warships, and then the third is the damage control capabilities of our warships,” he said.
“And when people talk to me about this, I always bring up USS Cole (DDG-67). … That ship should have sunk, and had it been a black-hull ship it would have sunk. Had it not been for the design of that ship, the quality of the construction of that ship and then the drilled and trained crew that acted immediately, some of them over the bodies of their comrades, kept that ship counter-ballasted, sealed it off and that ship’s back in the fight today.”