The expeditionary mobile base Lewis B. Puller (T-ESB-3) successfully completed launch and float-off at the General Dynamics National Steel and Shipbuilding Co. (NASSCO) shipyard on Nov. 6, 2014. US Navy Photo

ONBOARD USNS LEWIS B. PULLER – The Navy’s newest Afloat Forward Staging Base may include special operations capabilities when it makes its maiden voyage to the Middle East in late 2016 or early 2017, if the Navy chooses to make the much-desired upgrades to the ship after a year-long test and certification period.

USNS Lewis B. Puller (T-ESB-3), the first of three planned Afloat Forward Staging Bases – recently redesignated the Expeditionary Mobile Base, or ESB – delivered to the Navy on June 12, 2015, and sailed from San Diego to Norfolk via the southern tip of South America. Since arriving in Norfolk on Oct. 13, the ship has gotten started on a hefty test and evaluation schedule.

There are still many unknowns about the ship to be worked out in the next year. Chief Mate Anton Clemens, Puller’s first officer who also serves as the damage control team lead for Military Sealift Command’s Afloat Training Team West, said the Navy still needs to understand how the ship handles various sea and wind conditions before finalizing the operational envelop. Though the Expeditionary Mobile Base is based off the design of the Mobile Landing Platform, (recently redesignated the Expeditionary Transfer Dock, or ESD) the addition of a flight deck makes the ship more top-heavy and therefore less stable in heavy seas, he told USNI News Oct. 28 during a tour of the ship at Naval Station Norfolk.

Perhaps the biggest question, though, is whether the ship will deploy to U.S. Central Command with a mine countermeasures-only mission set or with SOF capabilities as well. 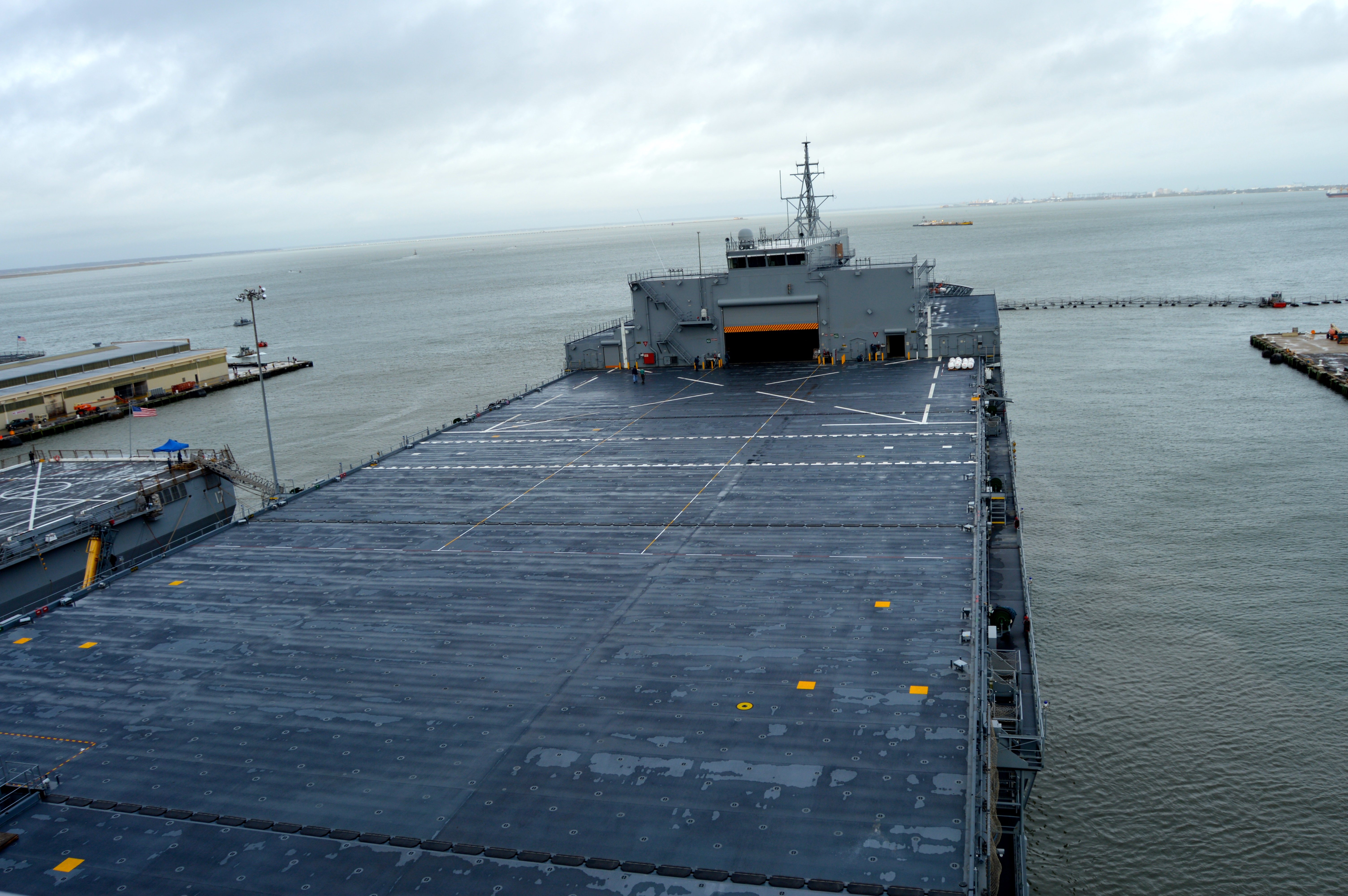 Jay Stefany, executive director of the amphibious, auxiliary and sealift office in the Program Executive Office for Ships, said Oct. 28 at the National Defense Industrial Association’s annual Expeditionary Warfare Conference in Portsmouth, Va., that the ship was designed and built with SOF capabilities in mind.

“The baseline requirement, the threshold requirement, is MCM capability. The ship class does have an objective capability for SOF-type missions and other potential missions,” he said during a panel discussion.
“So the ship is being built to the threshold, as most programs are, but after delivery we’re working with the fleet and the sponsors to put some upgrades into the ship that would allow it to do the SOF capability and come up to, if not all the way to the objective, a good chunk of the way to the objective. But that’s after the ship delivers for each of the three ships.”

According to a draft schedule obtained by USNI News, Puller would complete all its testing and certifications by August 2016, with an optional 120-day post shakedown availability and then an optional SOF backfit installation, test and certification, and training period before being deemed ready for tasking.

It is unclear when the Navy would have to make a decision on going through with the SOF upgrades before sending Puller to U.S. 5th Fleet for its maiden deployment. 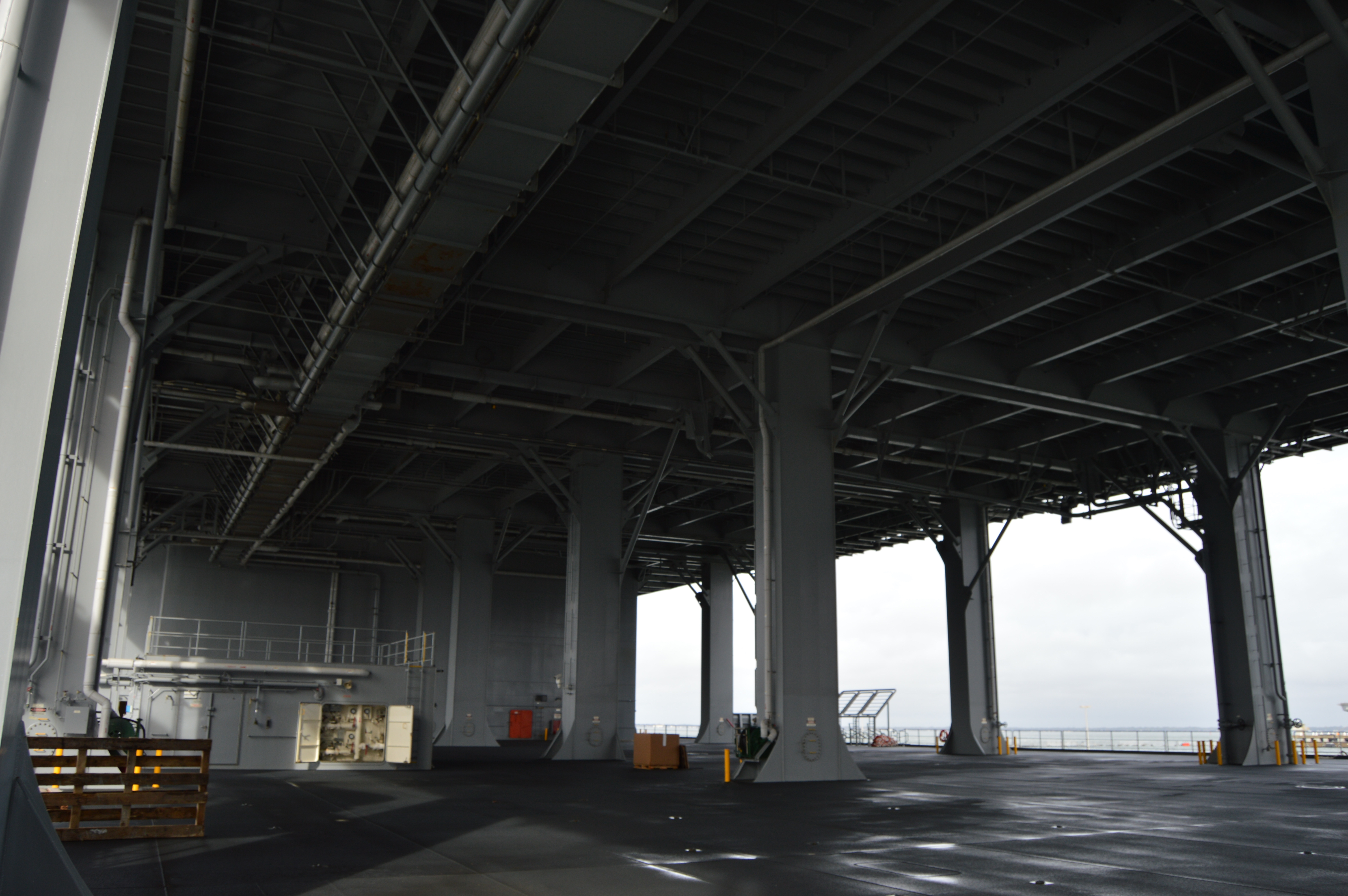 Strategic and Theater Lift Program Manager Capt. Henry Stevens said during the same panel discussion that the requirements development process for the Expeditionary Mobile Base took longer than planned to allow for a detailed discussion on how to keep the ship both affordable and flexible for future upgrades. The process began in December 2011, and the capability development document was not validated until March 2013, he said.

“We had our configuration steering board, that’s where we’ve got the usual suspects, the threes and four-stars in the room. They finished that up in September [2012] and it really then went to a place where it was at a high-level four-star discussion for about six months to make sure that we had it right,” Stevens said.
“And a lot of that turned out to be, hey, in those thresholds let’s make sure we have space, weight and select services built in so that we can easily make those future investments. So I saw this process go from just being a standard threshold and a standard objective to being, I’ve got a cost cap, recognize what I can afford today, but please be smart about what you’re designing – and it went beyond please, it went, we’ll go ahead and make that part of your threshold.” 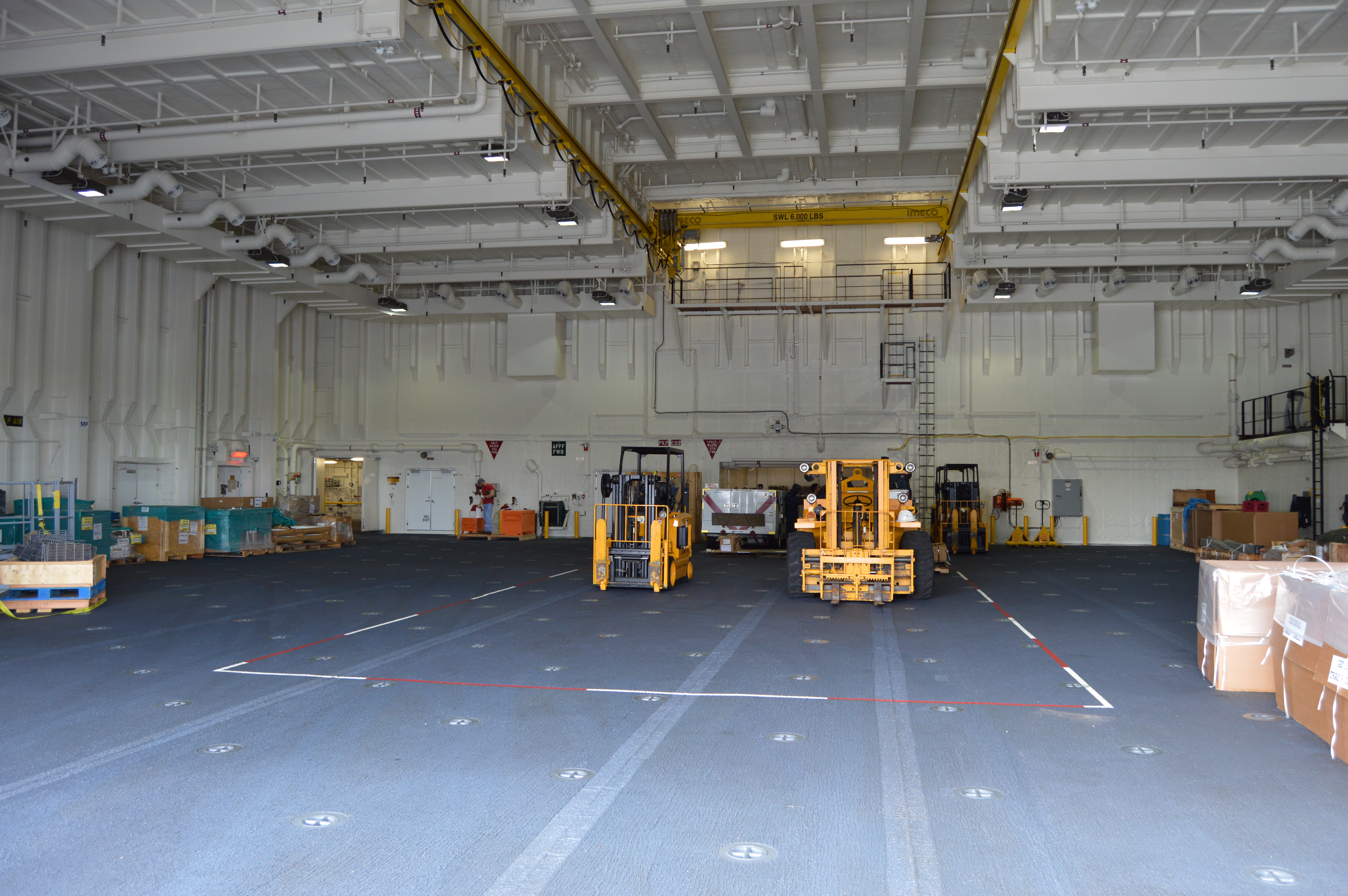 “So our ship is built with the opportunity to do that very easily and quickly, so the modular aspects of the ship you see and the opportunity to make low-level investments to add capability in bandwidth, additional radio, land some more helicopters, different kinds of boats, whatever it happens to be, is built into the ship, and I don’t have to add another generator or air conditioning, whatever to get it there,” he continued.
“So I think you would find we walked through that process fairly rigorously and methodically and at the highest levels made that decision.”

The ship has a 40-year expected service life, and “there’s lots of ideas out there that go beyond the objective [capability], and I would say there’s landscape and real estate to do that on the ship,” Stevens said.

Clemens told USNI News that the ship is currently focused on MH-53E helicopter operations, but that the flight deck and hangar could also accommodate the MH-60 or other smaller helicopters. He said there has been talk of upgrading the ship to accommodate the V-22 Osprey – and Stevens said it would take minimal engineering to accomplish that.

“There’s virtually no engineering work, modifications to the ship to support V-22 two-spot operations,” Stevens told USNI News after the panel discussion.
“Some outfitting and some specialized equipment that’s specific to V-22 as opposed to a different type of aircraft, but it’s very simple. So the Navy’s looking closely at adding that to the list of things if it’s a low-cost jump in capability, and when they should do that.” 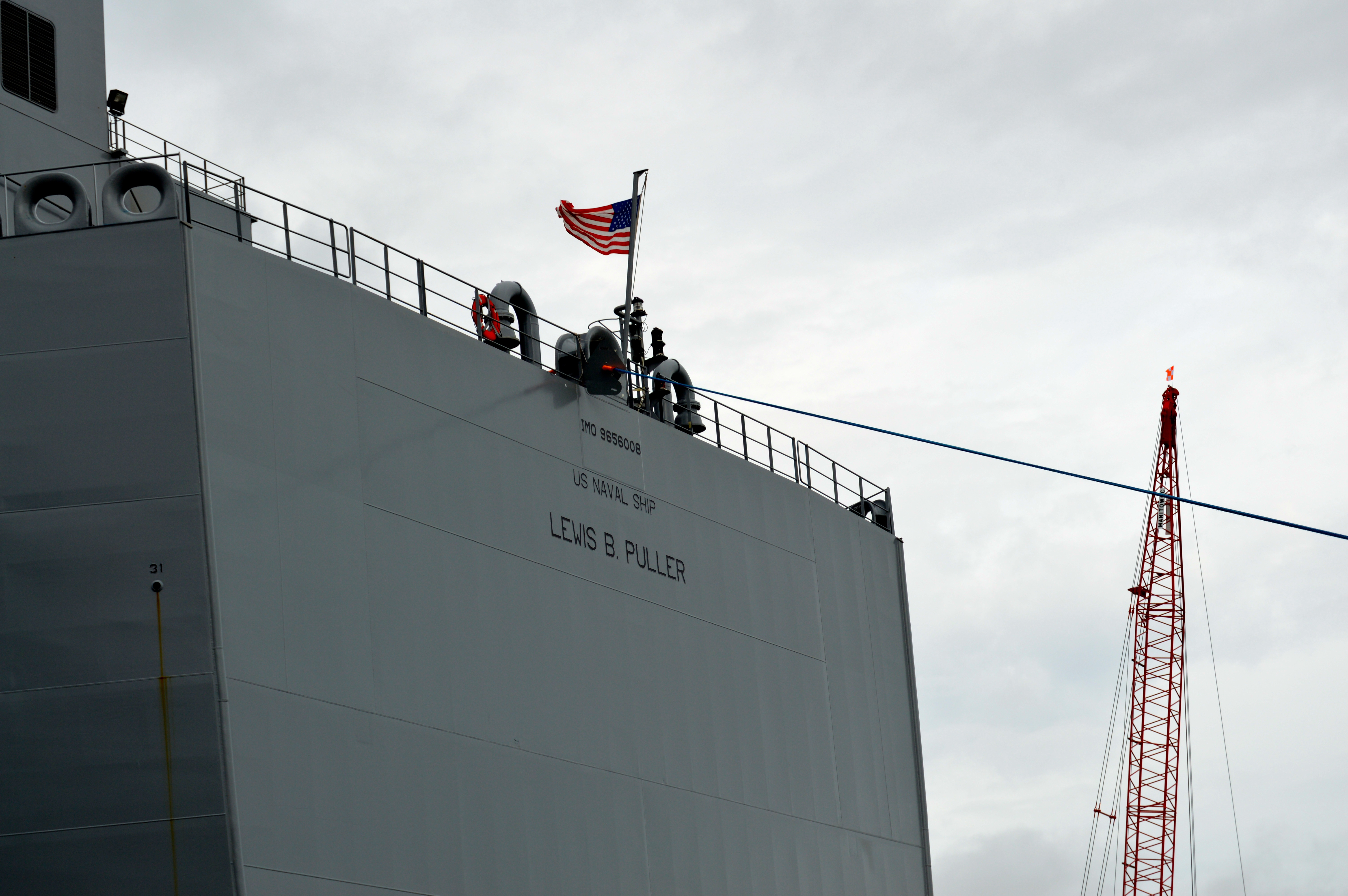 View of Puller from pier side. USNI News Photo

Stevens said the Navy may also look at increasing how many helicopters can operate on the flight deck at a time. Currently, the deck is designed with two parking spots and two operating spots – along with space for two helos inside the hangar – but he said the Navy could decide to convert all four spots to operational spots if needed. The front of the flight deck leads into the hangar, which is capable of performing maintenance as extensive as pulling out and replacing the engine, Clemens said.

Underneath the flight deck, which runs the length between the forward house and the aft house, is the mission deck. Whereas the original Expeditionary Transfer Dock can submerge to allow landing craft to pull onto the ship, that capability was disabled in the Expeditionary Mobile Base. Instead, a large crane carries small boats, towed arrays and unmanned vehicles from the mission deck into the water. The crane can carry 11 metric tons, and Stevens said the crane can move a 41-foot boat in up to sea state 3. If the Navy were to add additional mission sets to the ship class, Stevens said his office would look into what modifications, if any, would be needed to accommodate other small boats on the mission deck.

The Expeditionary Mobile Base will host a civilian mariner crew of 44 and a military crew of about 250 – about 100 in the operational crew and 150 in the aviation and MCM detachments, Clemens said. Civilian mariner quarters are in the aft house, with single-man quarters located under the bridge of the ship. The military crew live in the forward house, in a combination of 12-, 15- and 30-man rooms, plus suites for three sets of commanding officers and executive officers.

Clemens said he expects Puller will operate in a “very very similar” manner as the interim Afloat Forward Staging Base USS Ponce (AFSB(I)-15). The operational military crew will likely stay on the ship for a two- or three-year tour, while the aviation detachment may or may not rotate out, depending on combatant commander needs, he said, adding that that was one more thing the Navy needs to finalize in the coming year.

A second ESB is under construction at General Dynamics NASSCO in San Diego, and a third is planned to be procured in the Fiscal Year 2017 budget.

Given the flexibility of the ship and the ability to add on if needed, Director of Expeditionary Warfare Maj. Gen. Chris Owens told USNI News at the NDIA conference that the combatant commanders are already laying claims to the unbuilt ships in the class.

“The demand for that right now is so high, CENTCOM has got their hooks in this one (Puller) but both the [U.S. European Command] and [U.S. Africa Command] commander are asking for that ship, and if not that, they’re getting their bids in early to get the next one committed to them,” he said.
“They know they can employ it nearly full time.”