A memorial to the 129 men who lost their lives aboard submarine USS Thresher (SSN-593) in 1963 will be dedicated this fall at Arlington National Cemetery, after a six-year campaign to win the Army’s approval for the project.

Kevin Galeaz, president of the USS Thresher Arlington National Cemetery Memorial Foundation, said, “we owe our lives to these guys.”

Thresher sank on April 10, 1963, about 220 miles off Cape Cod. The mishap began with a piping failure that the ship and the crew could not recover from. Speaking with USNI News by telephone, Galeaz said the sinking led the Navy to institute the SUBSAFE program to maintain quality assurance in submarine construction, and to design and build submarines to recover from unexpected flooding.

That program “made a big difference” in having only one American submarine, USS Scorpion (SSN-589), sink after that, he said.

Galeaz himself benefited from this vast improvement in submarine safety, as a submariner who served from 1975 to 1982.

Thresher, which was the first of its class of fast-attack submarines and was commissioned in 1961, was designed to “be much deeper diving … and much quieter” than other submarines then in the fleet, Galeaz said. “It had the Soviets very concerned” about its passive and active sonar and anti-submarine missile capabilities if the Cold War turned hot.

The submarine was built at the Portsmouth Naval Shipyard in Kittery, Maine. Seventeen civilians from the shipyard and contractors were on board, along with Thresher’s crew of 16 officers and 96 sailors, when it left the shipyard for deep-dive testing and sank, killing all 129 aboard. 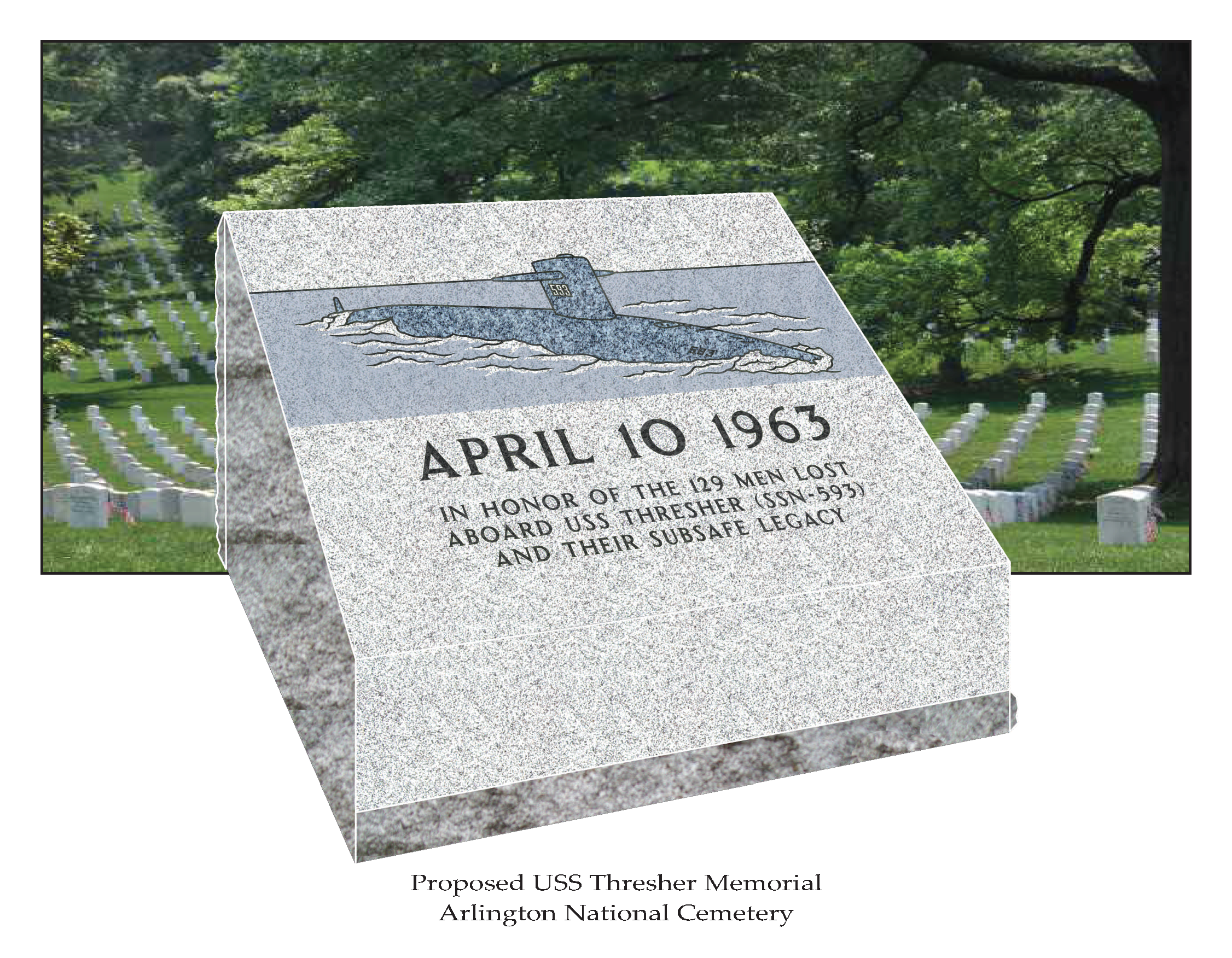 The foundation would like to have the memorial placed “in heavily trafficked areas, where the tour buses stop” – such as close to the walkways near the cemetery’s amphitheater, where the modestly sized memorials to the lost crew of space shuttles Columbia and Challenger are placed, or near the Vietnam Helicopter Pilot and Crewmember Memorial in Section 37.

Galeaz said the Army’s formal announcement of approval will be made Feb. 5, but he and some members of Congress have already been notified to expect the pending announcement.

The process of obtaining permission from the Army to place the memorial at Arlington has been filled with obstacles and stumbling blocks, in part due to internal management challenges the cemetery faced earlier this decade.

When the drive to build a Thresher Memorial first took hold in 2012, Galeaz said, the response from officials at Arlington was “we’re running of space.” Later, the Army with congressional approval put in place a series of regulations that said future memorials could not come by congressional resolution, but rather had to come from a not-for-profit and have sufficient funds to not only erect the memorial but also maintain it in perpetuity.

Galeaz said the successful drive by the Vietnam Helicopter Pilots Association helped pave the way for those supporting a Thresher Memorial. “That change” in how the Army and cemetery leadership viewed the application “really helped. It was a new way of looking” at applications from groups like the USS Thresher Arlington National Cemetery Memorial Foundation. The helicopter memorial was dedicated last year.

It also didn’t hurt to have the strong support of five New England senators, who wrote Army Secretary Mark Esper in November urging service approval for the final stamp in the six-step process.

“This memorial would serve not only to honor the sacrifice of those that lost their lives, but as a reminder of the dangers that all submariners face when they volunteer for duty,” the senators wrote.

A similar letter had been sent by New England senators five years earlier, advocating approval of the memorial, but in the fallout from the internal problems at Arlington that support was overcome by events.

With the $60,000 in hand to build the memorial, Galeaz said, “none of the money came from corporate donors. It all was from people who were affected by this tragedy.”

Galeaz said the foundation is now busy raising the money necessary for maintenance.

As for what to expect in the fall, he said a special reception is being planned for senior Navy officials, families of survivors and submarine veterans and will most likely take place at the Women in Service to America facilities at the entrance to the cemetery.