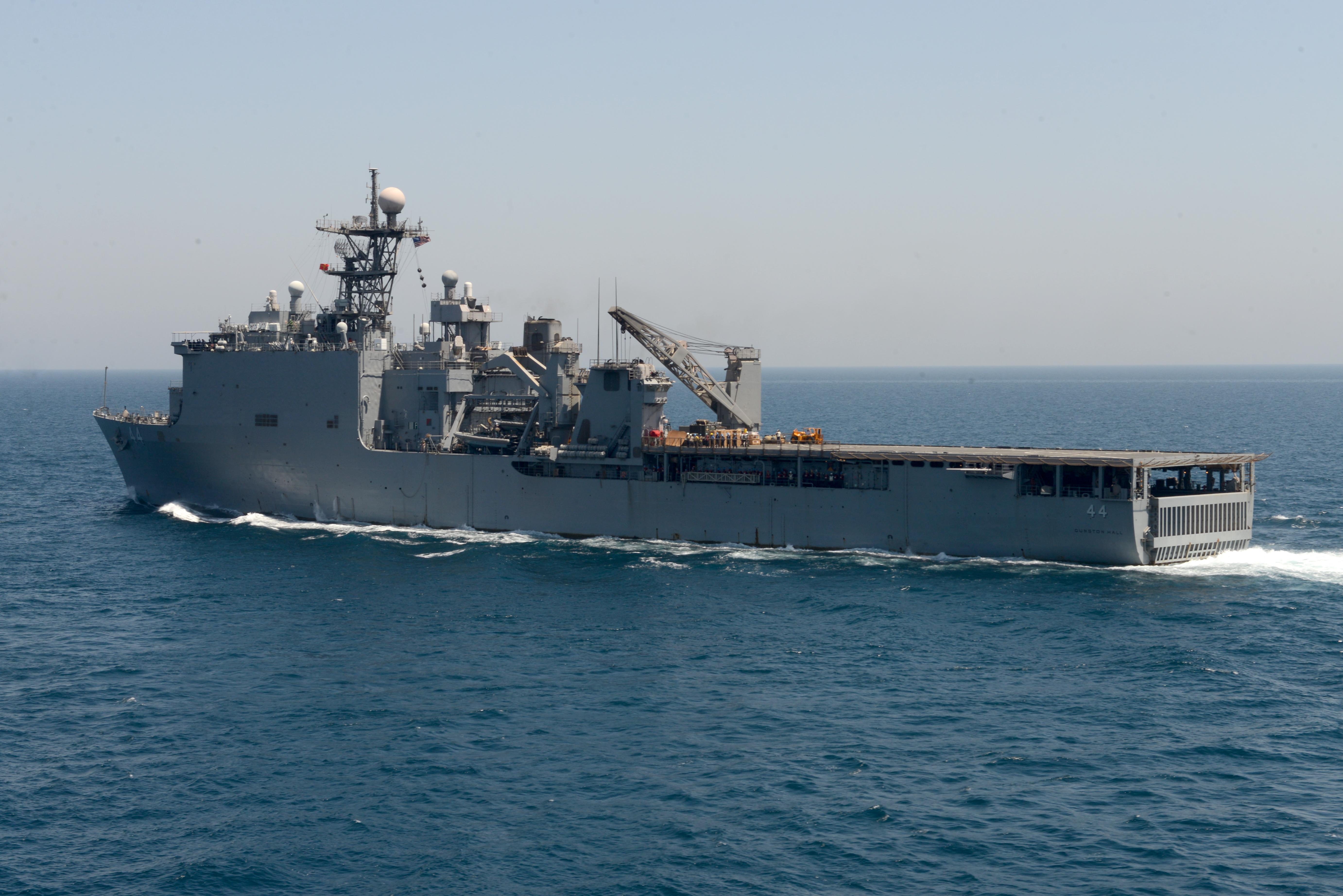 Two of the three ships in the Iwo Jima Amphibious Ready Group had to return to port in Reykjavik, Iceland, after heavy seas en route to Norway injured a few sailors and caused damage to one ship’s well deck.

According to a Navy news release, “the amphibious dock landing ship USS Gunston Hall (LSD-44) experienced heavy seas during the evening of Monday, October 22, 2018. As a result, the ship’s Landing Craft Utilities (LCU) and well deck experienced damage. The Gunston Hall is in port Reykjavik, Iceland for further assessment.”

Amphibious transport dock USS New York (LPD-21) also returned to port as a precautionary measure, according to the release.

U.S. Naval Forces Europe spokesman Capt. John Perkins told USNI News that the few sailors who were injured during the heavy seas suffered minor injuries, were treated and have returned to duty.

USS Iwo Jima (LHD-7), the largest ship in the group, did not turn back and is continuing on to Norway for the Oct. 25 start of the live portion of NATO exercise Trident Juncture 2018. USNI News was in Iceland to observe the exercise. 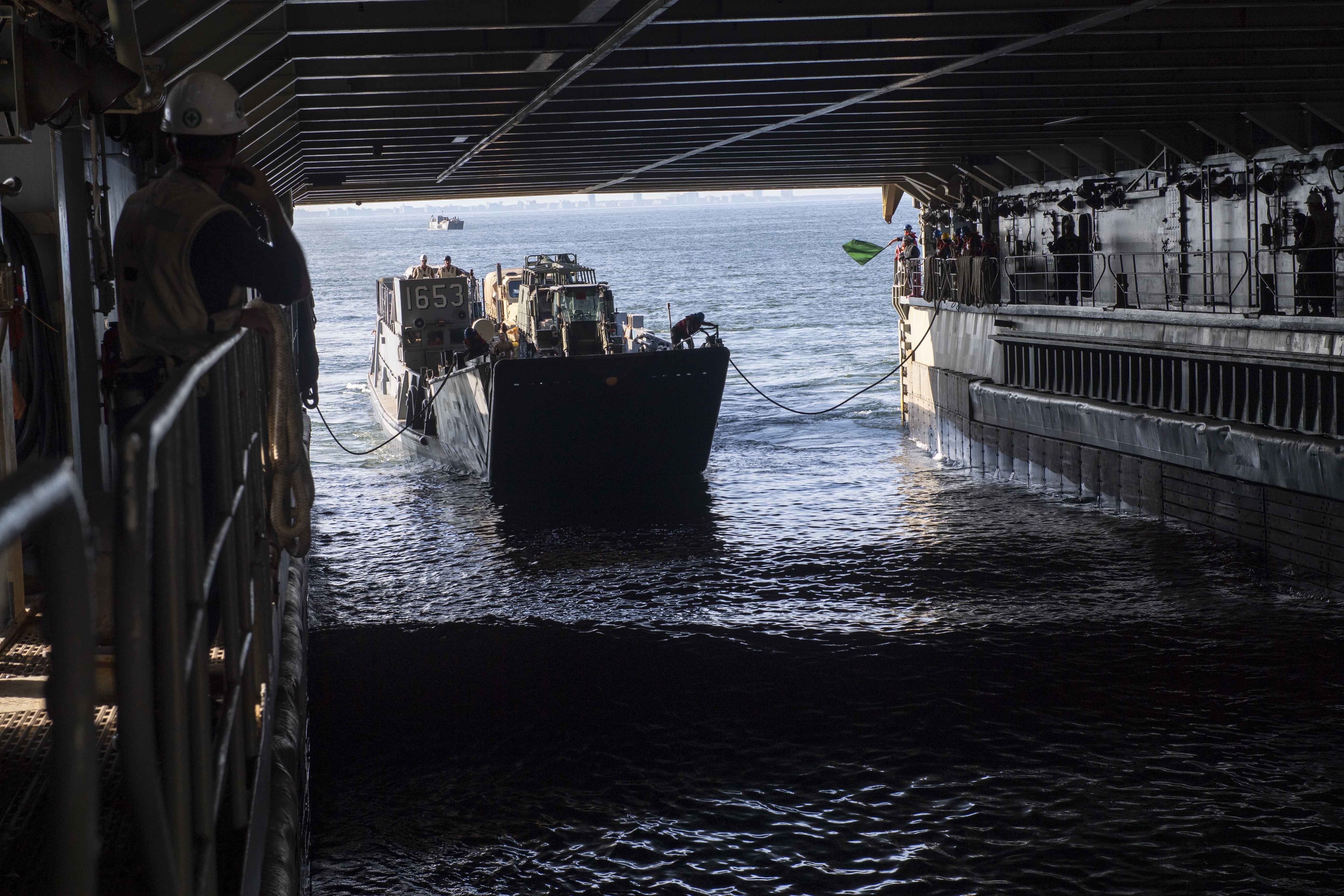 A landing craft utilities (LCU) enters the well deck of the Whidbey Island-class dock landing ship USS Gunston Hall (LSD 44) on Oct, 3, 2018, to embark on the ship for Trident Juncture 2018. US Navy photo.

All three ships had stopped in Iceland for a pre-exercise training event. The ships were delayed in arriving to Iceland due to heavy seas. Several sailors and Marines involved in the exercise told USNI News that many onboard were sea sick and that the ships altered their course to avoid even worse conditions. The Iwo Jima ARG was supposed to participate in an amphibious landing on Oct. 16, which was pushed to Oct. 17 due to the delay in arriving in Iceland. The landing was eventually canceled due to rough surf in the landing zone.

The ARG was supposed to move to Norway for the live portion of the Trident Juncture exercise, which runs Oct. 25 through Nov. 7. The amphibious portion of the exercise will involve sailing the ships into a Norwegian fjord and launching surface craft and helicopters to put Marines ashore.

It is unclear if New York and Gunston Hall will make it to Norway for any of the exercise. The Navy news release notes there is no timeline yet for the assessment of the damage to the ship.

While aboard Iwo Jima, several officials told USNI News that the Navy and Marine Corps were aware of their inexperience in cold weather conditions and the heavy seas of the North Atlantic and therefore were practicing good risk management – noting this was an exercise and not an actual contingency and they didn’t want anyone getting hurt.

“This is not war, there is not an imperative that I do something right now today,” Expeditionary Strike Group 2 Commander Rear Adm. Brad Skillman told USNI News.

He noted the need to be flexible and respond to weather and sea challenges as they present themselves, saying, “in an exercise like this, you build an exercise out and it’s on paper and it’s a plan. So you’ll have, I want to do this planned exercise event at this day and this time, I want to do the next one two hours later, and the next one two hours later. Well what happens if you have high winds or heavy seas that day? You have to decide whether you want to pick up and move it to another day or you just want to cancel it.”