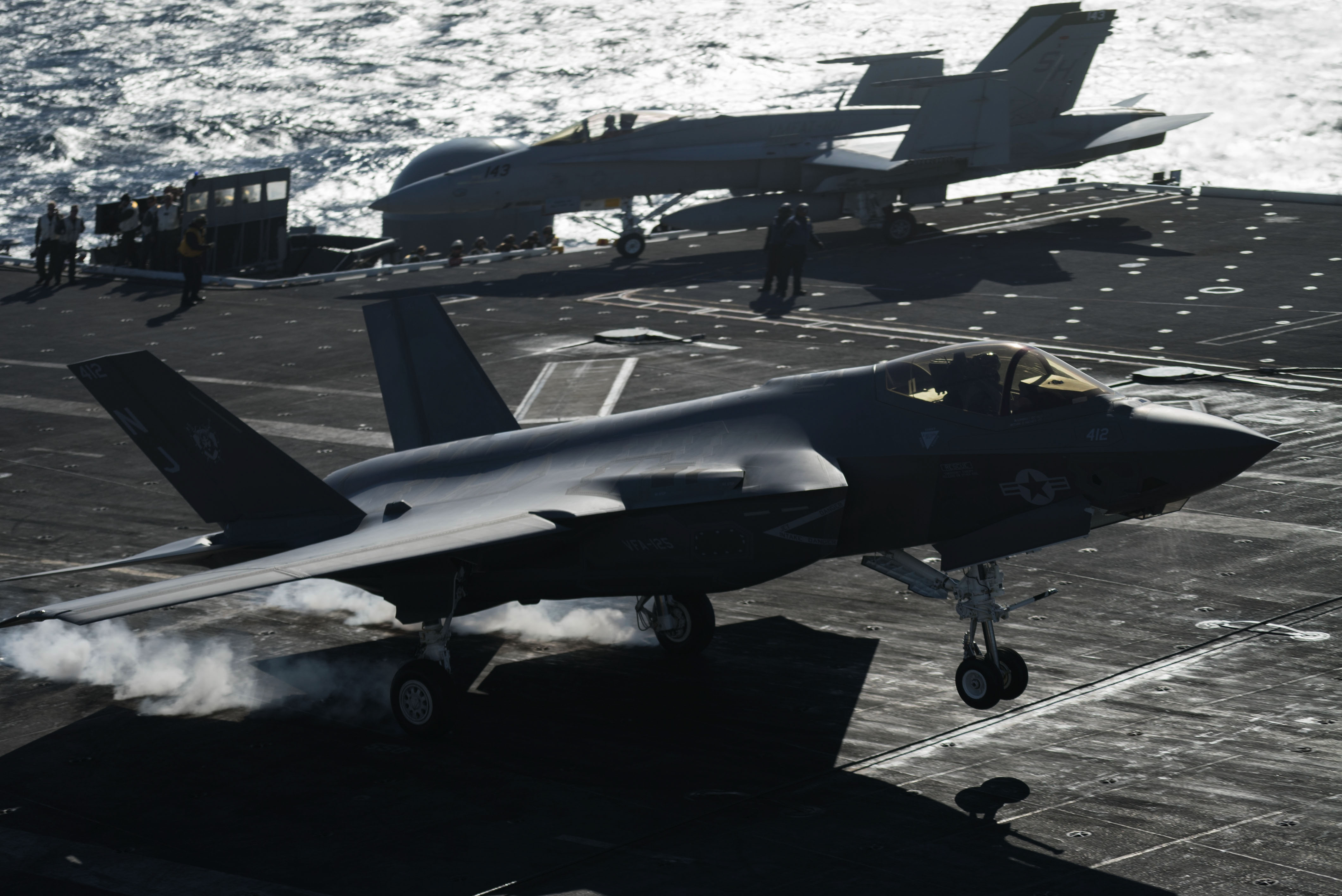 ARLINGTON, Va. — The Navy is beginning the formal operational testing of its first stealth aircraft to determine how well the F-35C Lightning II Joint Strike Fighter performs against stated goals and requirements, the admiral heading the integration office of F-35C said Wednesday.

Rear Adm. Dale “Woody” Horan said the arrival of Strike Fighter Squadron (VFA) 147 out of Naval Air Station Lemoore, Calif., aboard carrier USS Carl Vinson (CVN-70) was the start to answering the question “does it do what we want it to do.”

This summer, F-35C aircraft from both VFA-147 and VFA-125 participated in air wing integration exercises with F/A-18E/F Super Hornets, EA-18G Growlers and E-2D Advanced Hawkeyes aboard carrier USS Abraham Lincoln (CVN-72). This integrated air wing operation was a prelude to the formal initial operational test and evaluation (IOT&E) that is taking place starting this fall.

While he reported anecdotally pilots’ excitement about the plane’s performance, including very stable landings, Horan said official reports are not yet complete.

“We still need to see the aircraft configured in operational tests,” he said, speaking to the Northern Virginia Council of the Navy League. This will be the first close and extended examination of how the Joint Strike Fighter fits with an air wing before the Navy fields the new plane more widely throughout the fleet.

Operations from the Lincoln integrated air wing tests already showed the need to understand how the F-35 operates alongside the rest of the Navy. In August, an F-35C from Lincoln suffered serious engine damage while conducting an aerial refueling with a Super Hornet, in what was characterized as a Class A accident by the Navy. Both the refueling aircraft, which suffered minimal damage, and the strike fighter landed safely following the mishap. There were no reported injuries to the pilots. Results of the investigation are now yet complete.

In answer to an audience question, Horan said the F-35C “is completely different than any airplane we’re flying.” He was referring to its low-observable stealth characteristic, along with newer technological capabilities and longer reach. He added those kinds of changes mean that pilots training to operate the new plane “are going to have to be a little different than a legacy pilot.”

The aircraft’s advanced sensors, in particular, coupled with its capability and range require that pilots “envision the mission differently than you and I.” But that will only come with time, as the Navy continues to buy more new planes so more pilots can train with them and more squadrons convert to the new platform.

Horan told USNI News, “we want to do things differently” with the Joint Strike Fighter, “and there are ways to do it differently.” He said the Navy is talking with the Air Force about the lessons it is learning with the F-22 Raptor stealth fighter’s operations in Syria and Iraq to see how they apply in sea service planning.

As an example, for an F-35C future mission, he said, “I may want to send them out as singles” rather than four strike fighters operating together to do a job.

Horan added, “We are sending a couple of F-35s out to every Top Gun [class at Naval Air Station Fallon, Nev.] to work with fourth-generation aircraft” to learn how to communicate and operate effectively together. Likewise, he didn’t foresee large obstacles in operating with allies, such as the United Kingdom that is introducing the Marine Corps variant F-35B to its operations and has its own fleet of legacy aircraft, or with allies and partners not in the F-35 program. He acknowledged that “countries use different weapons” and “countries use different ways of communicating,” but those differences can be addressed.

“That’s our job” to operate with others, whether they operate from the sea or from land. “That’s what naval aviation has always done.”

The aircraft “has the backbone” to do that, Horan said in his talk.

The admiral also said the Navy was still working through determining how to sustain the airplanes, from a logistics and a maintenance standpoint.

On the maintenance side, training and fielding maintainers for the Navy’s variant of the Joint Strike Fighter is on track for now, Horan told USNI News. They are training with maintainers from the Air Force and Marine Corps at Eglin Air Force Base, Fla., and are then sent to squadrons. For years, the Air Force has been reporting a shortage of up to 4,000 maintainers for its aircraft fleet and has tried to address the need with bonuses and other incentives.

While meeting current needs for F-35C maintainers, Horan added a note of warning for the future, saying “the Navy has been falling short” in meeting its recruiting goals of adding 7,500 sailors for a larger fleet. Continued shortfalls would affect all ratings.