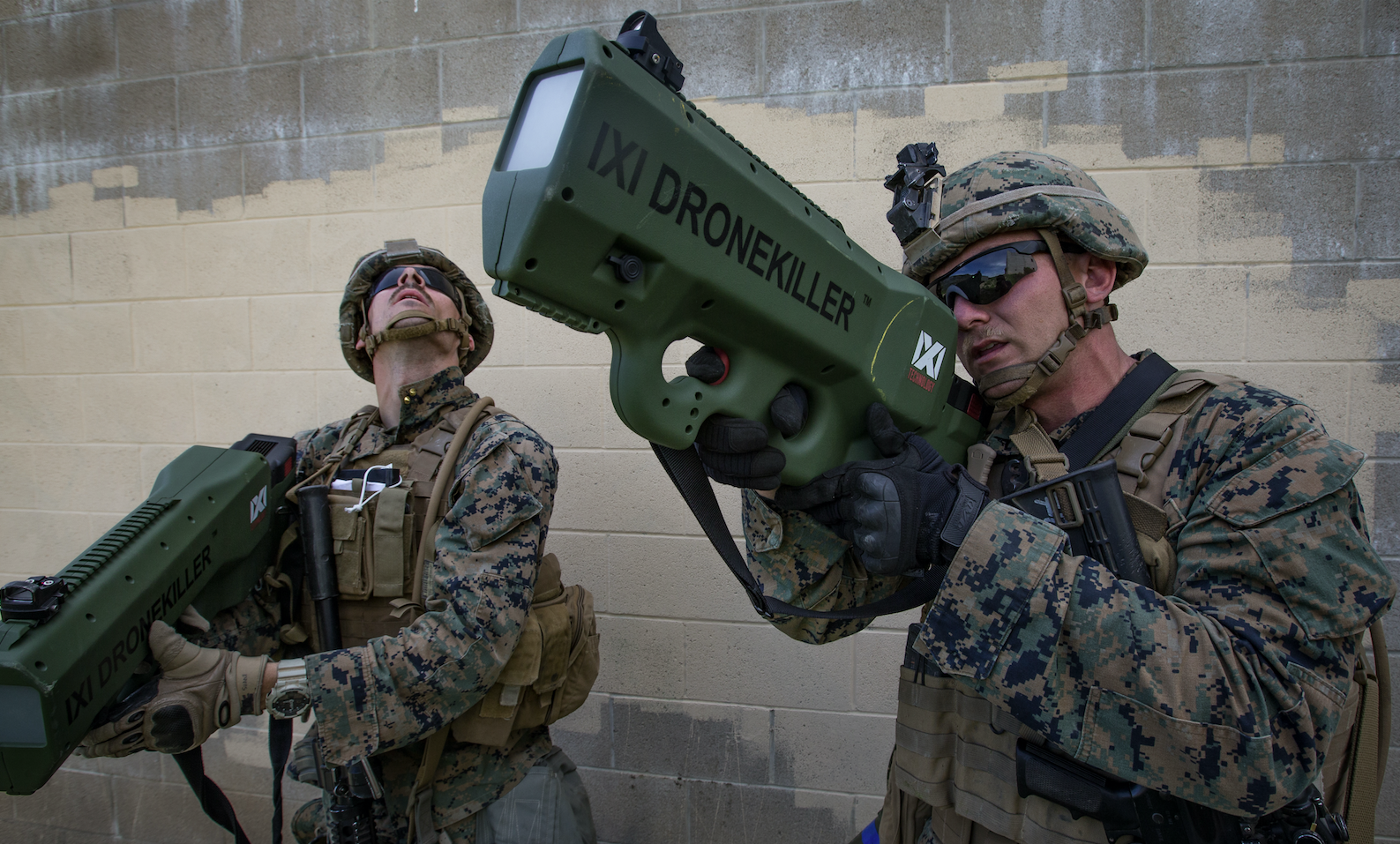 MARINE CORPS BASE QUANTICO – The National Defense Strategy and the enemy’s evolving technological capability are forcing the Marine Corps to think more seriously about how to tackle sea control, ground-based air defense and situational awareness for squads operating in a dispersed manner.

Several speakers at the annual Modern Day Marine event last week discussed the way the service is looking to develop new systems to meet these challenges. 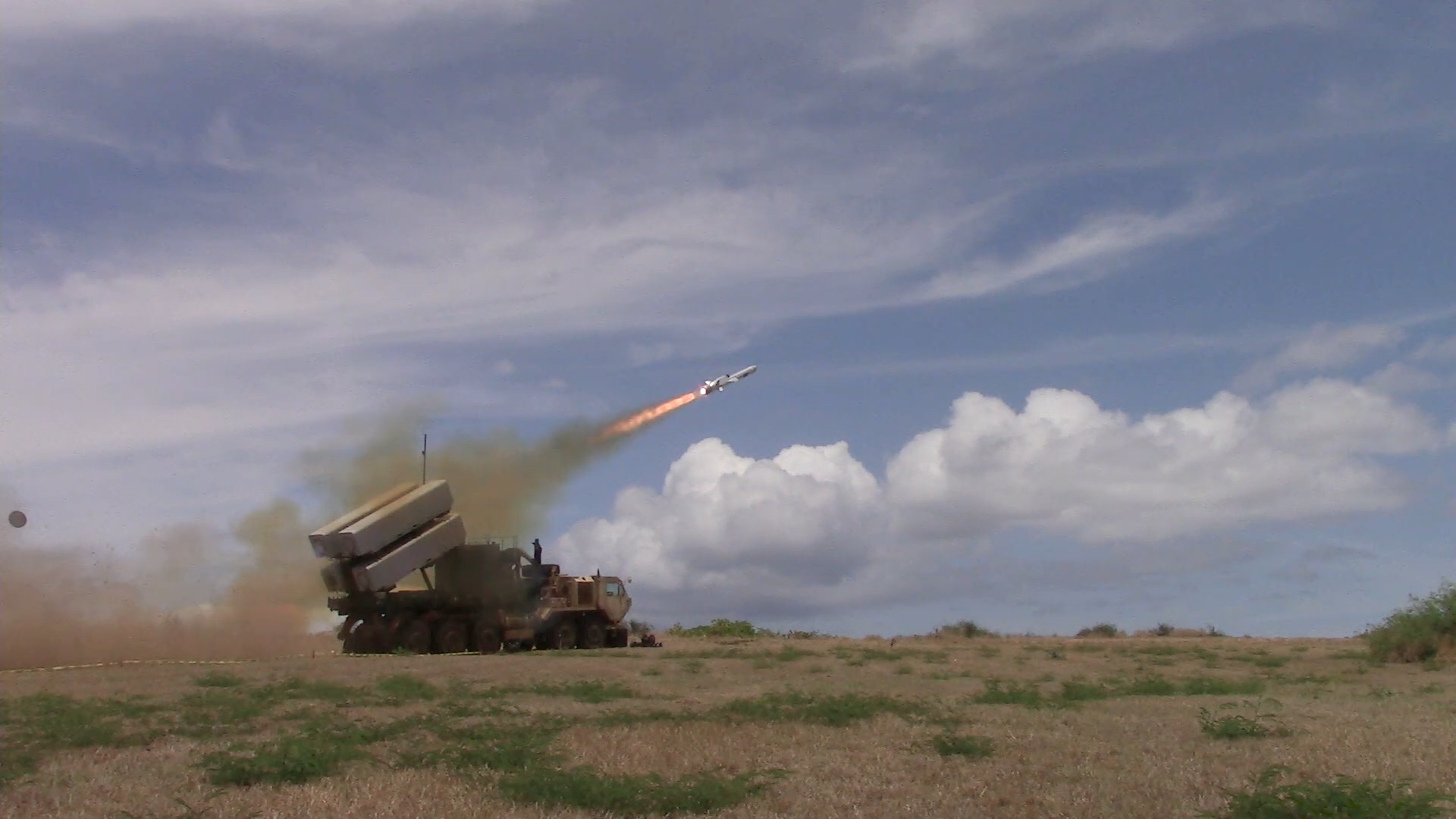 The Army fired a Naval Strike Missile from a Palletized Load System truck on July 12, 2018, hitting a decommissioned ship at sea, 63 miles north of Kauai in the 2018 Rim of the Pacific Exercise. US Army photo.

When it comes to lethality, he said, at the infantry battalion and the ground combat element levels, the Marines are looking at long-range precision fires and a shore-based sea-control capability “to fill that gap early in the fight, be that forward-deployed force, fill the gap until the larger naval and joint force can get there and respond.”

Col. Michael Manning, Ground Combat Element Systems portfolio manager at MCSC, elaborated that there are many missiles in industry today that can take on the sea control mission, but the Marines need something that fits in their launchers and can integrate with Marine – and Navy – command and control systems.

Manning told USNI News during a question and answer session that there’s money in his portfolio and a handful of missiles that are being looked at, but the integration piece will determine how the Marine Corps moves forward.

Over the summer, the Army used a Naval Strike Missile from a launcher on a Palletized Load System to fire from the shore at a decommissioned Navy ship, as part of a sinking exercise (SINKEX) during the 2018 Rim of the Pacific exercise. The Japan Ground Self-Defense Force fired a similar land-based anti-ship missile during the same SINKEX. Former U.S. Pacific Command commander Adm. Harry Harris, who now serves as the ambassador to South Korea, said in 2017 that the Army being able to sink a ship would be a major piece of the Multi-Domain Battle concept, and that ultimately “I’d like to see the Army’s land forces sink a ship, shoot down a missile, and shoot down the aircraft that fired that missile – near simultaneously – in a complex environment where our joint and combined forces are operating in each other’s domains.”

Under the Marines’ Expeditionary Advance Base Operations concept, Marine ground forces may be dispersed ashore – and potentially isolated on different islands in an island chain – and would have to not only protect themselves but also contribute to the joint maritime fight for sea and air control. Having an anti-ship capability would be an important step in achieving this vision.

Manning told USNI News after the event that “we’re teaming with [the Army], we always look to them to follow. We’re doing something somewhat different in that the Army has some different platforms that we just – they’re too big for us, we’ll say it that way. But yeah, we always work with our Army brethren.”

He added that the Marines weren’t far enough along to start planning any tests or demonstrations yet.

The Marines have overhauled the web of systems that contribute to defense against rockets, mortars, artillery and small unmanned aerial systems (UAS), but a rapidly evolving threat has led to ground-based air defense research to be “probably one of the hottest buttons right now for us in the PEO,” Program Executive Office for Land Systems’ Director of Science and Technology Mike Halloran said in a separate panel at Modern Day Marine.

The AN/TPS-80 Ground/Air Task-Oriented Radar is the new radar that will look for incoming air threats. G/ATOR Block 1, which covers air defense and air surveillance, is currently in initial operational test and evaluation, Rob Cross, the deputy at PEO Land Systems, said during the panel. G/ATOR Block 2, with a counter-battery capability, is set to begin its IOT&E soon, he said. USNI News previously reported that Block 1 testing was scheduled to begin in October and Block 2 in December.

The Common Aviation Command and Control System (CAC2S) that integrates the information coming in from the G/ATOR is now fielded and in the sustainment phase, Cross said.

But there’s a lot of ongoing movement in the latter part of the kill chain, and in fact the “Ground Based Air Defense” portfolio that looks at defeating threats was recently pulled out of the G/ATOR program and made into its own program office with a program manager, in a nod to the importance of keeping up with this technology. The new office will pursue a GBAD Future Weapon System (GBAD FWS) called the Marine Air Defense Integrated System (MADIS), which will be the next-generation solution for low-altitude air defense (LAAD) battalions. MADIS Increment 1 is in engineering and manufacturing development now, according to briefing slides from the PEO.

Halloran told USNI News during a question and answer session that, in addition to the development taking place on the MADIS program, the science and technology community is looking at the ground-based air defense problem from a variety of angles and throughout the whole kill chain.

“As you’re trying to counter UAS, it’s important that you reach out farther than they can reach in, so what we’re looking for is ways to identify those UASs at a distance before they can do us any harm,” he said. 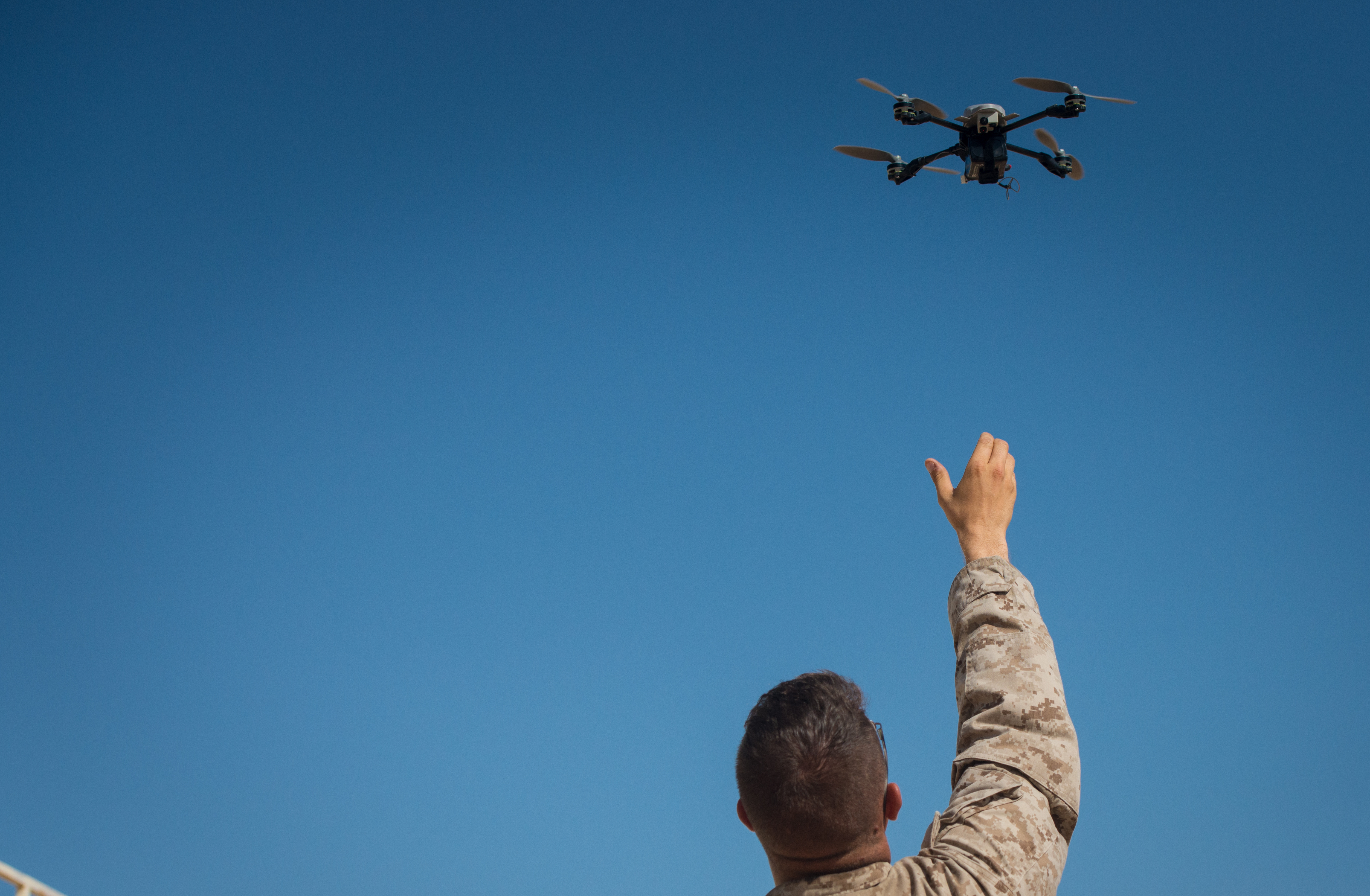 From another perspective, the National Defense Strategy portends a greater reliance on the Marine Corps rifle squad, which may be dispersed and therefore will have to be more self-reliant, Joe L’Etoile, the director of the Close Combat Lethality Task Force, said at Modern Day Marine.

Marine Corps leadership has already approved the addition of a tech manager to control unmanned systems and other gear that will help the squad, as well as an assistant squad leader that will manage the information that comes out of these systems.

As for the tech itself the Marines want, L’Etoile said there’s a focused effort on the sensing phase of the kill chain, where ground forces experience the most combat casualties. Advances in artificial intelligence, unmanned aerial systems and robotics will be important here, he said.

“In the sensing realm, which I would tell you, if you look at where casualties actually have taken place, about 90 percent – I like to look at that 90 percent as, what part of this is find ‘em, fix ‘em and finish ‘em? We’re pretty darn good at fix ‘em and finish ‘em – we could do better – but where we tend to take our casualties is in the find ‘em,” he said.
“Once we’ve found the enemy we can do a darn good job of fix and finish. So the find ‘em phase … is what you would call the sensing. Situational awareness, situational understanding. A lot of initiatives underway in that regard to provide situational awareness through many different means to the squad leader. One of them, you’ve seen in articles about what’s expected in the new heads-up display – the ability to provide unmanned aerial system feeds directly into the reticle that a soldier or Marine is wearing in his new heads up display goggles. … The bottom line is, if you truly want to bend that curve of the 90 percent … you have to spend a lot of time on the find ‘em phase, in other words the sensing phase, and making the appropriate investments there.”