Marines in the Infantry Officer Course fire at an enemy trench during a live fire training exercise at Range 410A aboard the Marine Corps Air Ground Combat Center, Twentynine Palms, Calif., June 9, 2018. US Marine Corps

A Pentagon-directed group tasked with making close-combat infantry more lethal and effective has its sights on getting troops into more realistic, immersive training as soon as possible.

At the same time, the joint-service Close Combat Lethality Task Force identified the need to recruit and retain servicemembers who are steeled for the nasty, violent, close-in fight that’s at the core mission. And the task force is looking at more lethal and effective weapons to achieve “overmatch” in close combat and, ultimately, improve the odds of combat success against adversaries.

Defense Secretary Jim Mattis, in a March 16 memo establishing the task force, directed the task force to develop, evaluate, recommend and implement improvements that ensure infantry combat capabilities, lethality, survivability, resilience and readiness. The focus is on squad-level infantry of the Marine Corps and the Army and on the Army Special Operations Command, which includes the 75th Ranger Regiment. The task force’s work comes as both services continue efforts to invest in, reshape and modernize their future forces, including ground combat units.

The Close Combat Lethality Task Force’s broad mission is about close-in combat, “within line of sight of the enemy, where historically the vast majority of military combat casualties occur – approximately 90 percent,” Army Sgt. Maj. Jason Wilson, the senior enlisted member of the task force, told reporters at a Pentagon briefing on Wednesday.

The goal, Wilson noted, is to enhance squad lethality in a way “that is measurable and provides overmatch against our adversaries.” The intent is to apply lethality and survivability concepts from various close-combat formations, or units, to conventional infantry forces.

Wilson didn’t detail any approved recommendations or decisions by Mattis yet, but he said “there is forward-momentum on it … in the very foreseeable future.”

Task force members are looking at several lines of effort, including: 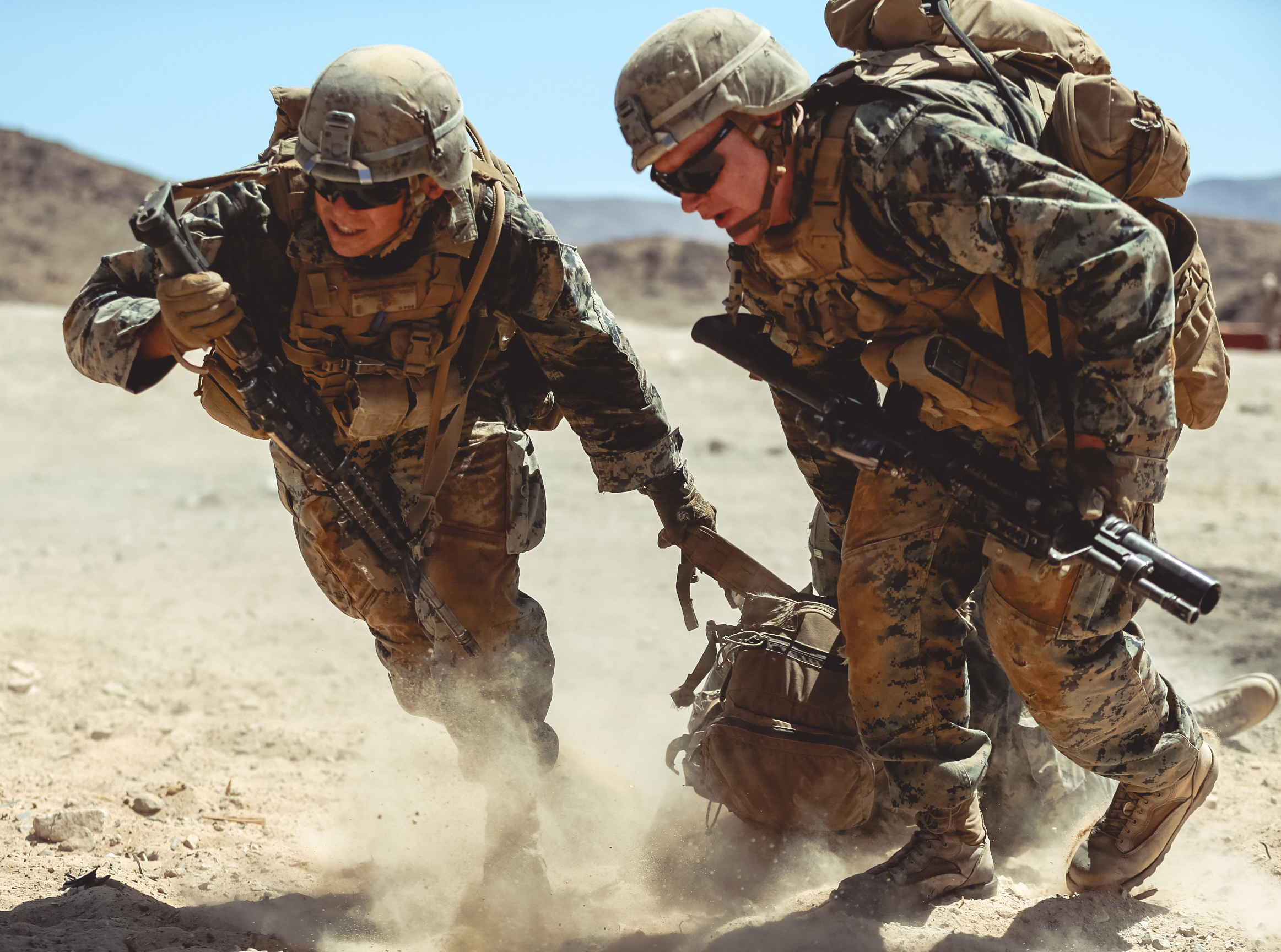 Marines in the Infantry Officer Course drag a cherry picker back to their trench during a live fire training exercise at Range 410A aboard the Marine Corps Air Ground Combat Center, Twentynine Palms, Calif., June 9, 2018. US Marine Corps

The task force will bring the “most promising solutions” to Mattis for guidance and decisions, Wilson said. “It started in April and will continue on for the foreseeable future.”

This summer, CCLTF members visited some of the military’s largest and busiest combat training centers. The group is also looking at industry advancements in warfighter equipment and best practices in training and doctrine of U.S. forces and NATO partners, he said.

In Israel, CCLTF members studied leader development, equipment and policies, Wilson said. Three weeks ago, the task force visited the Marine Corps Air-Ground Combat Center (MCAGCC) in Twentynine Palms, Calif., where they saw “Sea Dragon 2025” Squad-X experimentation, which showcased sensing technologies designed to “find, fix, finish, exploit and analyze.” The task force traveled to Fort Benning, Ga., to discuss training with the Army’s Office of the Chief of the Infantry and the Maneuver Center of Excellence and selection methods with leaders in the 75th Ranger Regiment.

Wilson didn’t provide details about those visits but said “the feedback we receive likely will generate future discussion.”

“I won’t speak on specifics right now, as a lot of things we made recommendations on are still in the works,” he added. Those recommendations likely will include the already fast-growing trend of incorporating LVC and gaming technologies into individual and unit combat training.

The Marine Corps and the Army are looking at the synthetic training environment, or STE, using virtual training systems to augment live, on-the-ground training to create more realistic, immersive training simulations that closely match real-world scenarios troops might face. Mattis among others have advocated for training and facilities like the Marine Corps’ Infantry Immersion Trainers that put units through the chaos and stresses of combat in repeated rehearsals before they head into a potential battle.

The STE “can allow a soldier to fight the terrain, fight the enemy and go in – as the secretary of defense stated – fight the 25 bloodless battles before their first contact, wherever they are located, whether it’s in their company operating facilities back home installations or they are forward-deployed down range,” Wilson said.

Expanding STE capabilities, officials say, will give more units realistic training at home and augment larger-scale, collective training that units can do at the military’s largest and busiest training centers. These include the Marine Corps’ MCAGCC at Twentynine Palms, the National Training Center at Fort Irwin, Calif., and the Joint Readiness Training Center at Fort Polk, La.

Tougher challenges may come as the task force looks to recruit more men, and to a lesser degree women, into the infantry.

Military leaders say the future fight will demand much more of its infantry units – especially the small units like squads and platoons that, in a distributed battlefield, will have more responsibilities but also more advanced systems and weaponry. Among the ideas being circulated is a push to mature the infantry – such as requiring troops to log several years of service before taking an infantry MOS, something Marine Corps Commandant Gen. Robert Neller suggested during the WEST 2018 conference in San Diego earlier this year.

Infantry encompasses the largest, by numbers, of military occupational specialties in the Marine Corps and in the Army. Infantry has been seen both as a noble calling and also a last-ditch place for lower performers and poor Armed Services Vocational Aptitude Battery (ASVAB) scorers. The task force wants to change that impression on today’s high-tech generation, especially with rising demands for tech-savvy skills and geeky grunts. 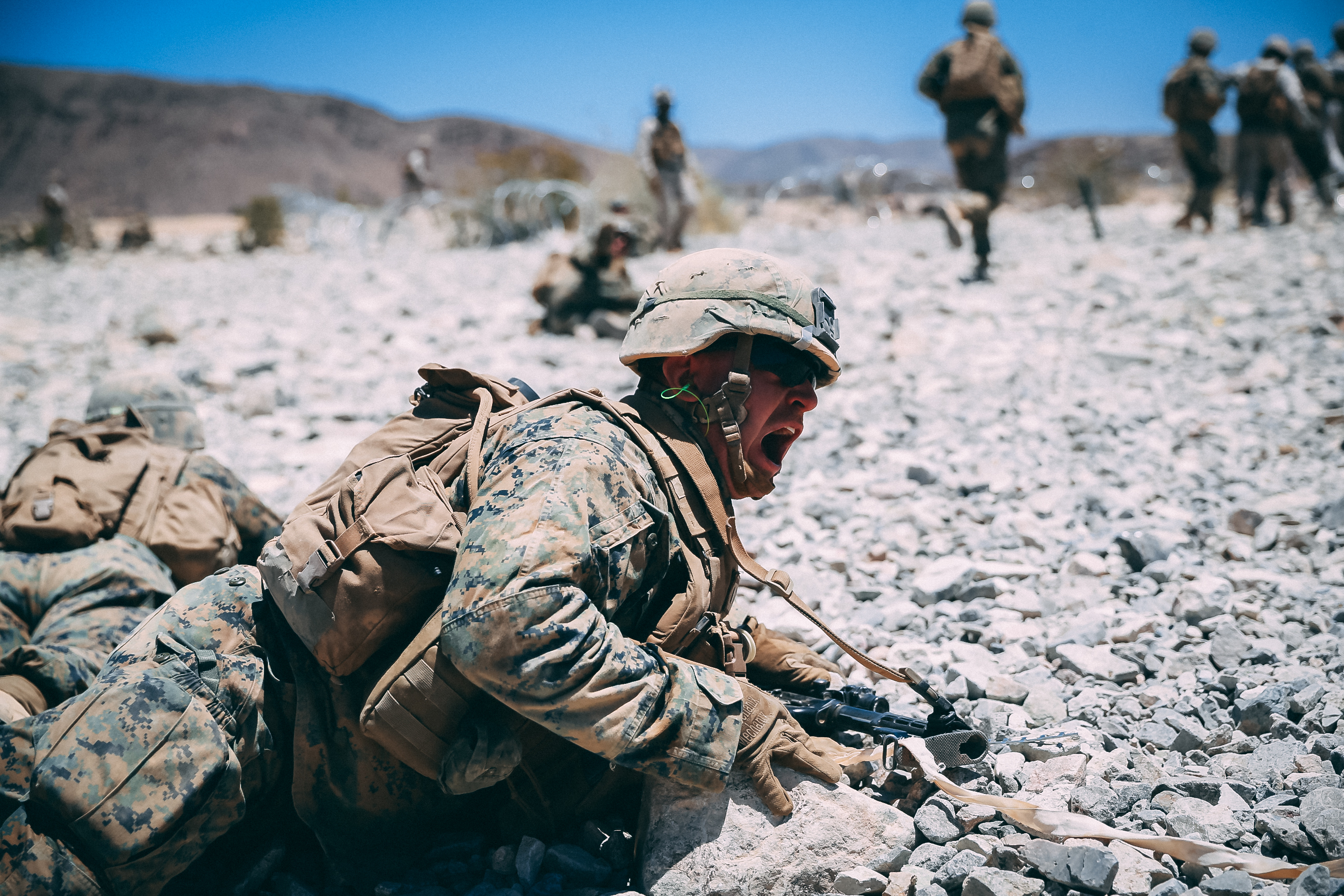 A Marine in the Infantry Officer Course yells at his fellow Marines to push forward during a live fire training exercise at Range 410A aboard the Marine Corps Air Ground Combat Center, Twentynine Palms, Calif., June 9, 2018. US Marine Corps

Infantry is “a tough job for anybody to be able to, as you know, the primary purpose to close with and destroy the enemy. That is our purpose,” said Wilson, who’s deployed multiple times in his 23 years in the Army. “We are looking to get the infantry to where it is not a place where we send soldiers … (who) don’t have the mental capacity to do other jobs.”

Finding Marines and soldiers fully capable of doing infantry’s front-line, dirty work is getting harder, as the pool of qualified and willing young people continues to shrink. So it’ll be more incumbent on the services to fill those infantry quotas and billets with those with the desire, grit and resolve to fight and lead.

And it’s not just about scoring high on physical fitness scores or on the rifle range. Leadership potential and mental stability are necessary for someone to be in a close-combat unit, Wilson said.

While in Georgia, the Close Combat Lethality Task Force looked at the Rangers’ selection process and is weighing some recommendations that can be used across all the services, he added.

With a limited recruitment pool, retention becomes more critical. “We need to do everything we can do to do hang onto those soldiers, to help train the new soldiers when they come into their formations,” Wilson said. That’s cheaper in the long run “because you’ve already invested the time and the money into those soldiers.”

The task force has “talked about” measures such as specialty bonuses as tools to keep good infantry troops and infantry leaders, he said, adding that leadership is key to retention.

“That’s where the leadership has to come in, at the squad level and all the way up, and talk with these kids and try to get them to stay onboard and provide that good leadership for our close-combat and infantry forces.”