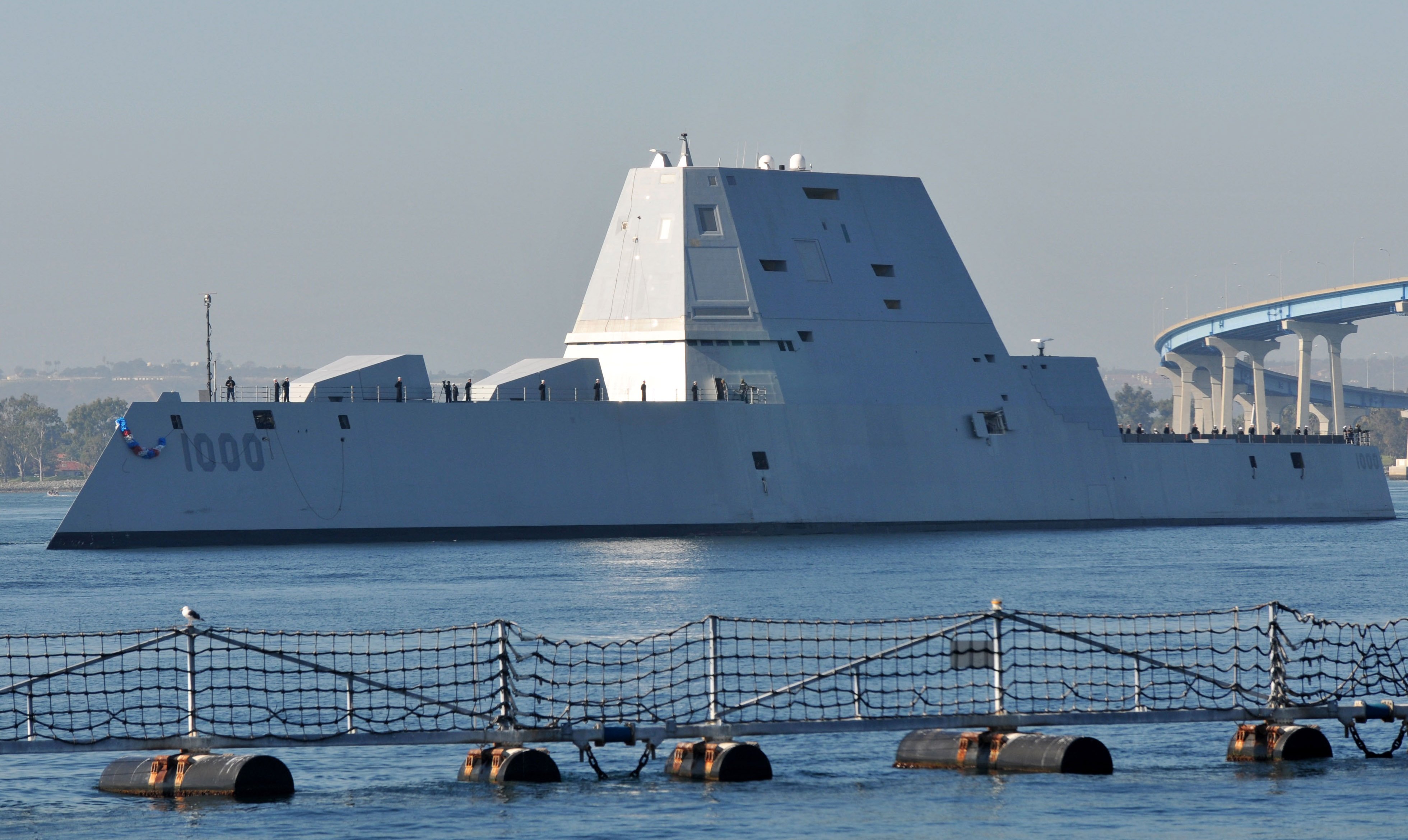 The U.S. Navy’s newest warship, USS Zumwalt (DDG 1000) passes Coronado bridge on its way to Naval Base San Diego. Zumwalt is the lead ship of a class of next-generation multi-mission destroyers, now homeported in San Diego. US Navy photo.

This post has been updated to include an Aug. 22 statement by the Navy.

When the president signed the Fiscal Year 2019 National Defense Authorization Act last week, most of the contents of the 788 pages of legislation would take some time to go into effect.

But one thing happened right away: the Navy’s count of deployable battle force ships dropped by two.

The 2019 defense authorization bill clarifies what lawmakers tried to do two years ago related to Navy ship-counting, making clear that a ship cannot be included in the Naval Vessel Register’s list of battle force ships until it has been fully delivered to the Navy – and in the case of ships with a phased delivery, where the Navy takes custody of the hull but adds in the combat system or electronics later, that means the final delivery date.

So, upon passage of the bill, Zumwalt-class destroyers USS Zumwalt (DDG-1000) and yet-to-be commissioned Michael Monsoor (DDG-1001) were taken off the battle force ship count and will not be added back on until they complete a combat system activation in San Diego.

In the FY 2017 NDAA, lawmakers stated that the Navy should “deem ship delivery to occur at the completion of the final phase of construction,” and that all materials submitted to congressional committees should use that format, rather than including an earlier partial-delivery date.

A basic argument for the change is that a ship without a combat system could not be deployed if a conflict broke out, and in that sense does not meet the Naval Vessel Register’s criteria of being “a commissioned United States Ship warship capable of contributing to combat operations” or a “United States Naval Ship that contributes directly to Navy warfighting or support missions.” 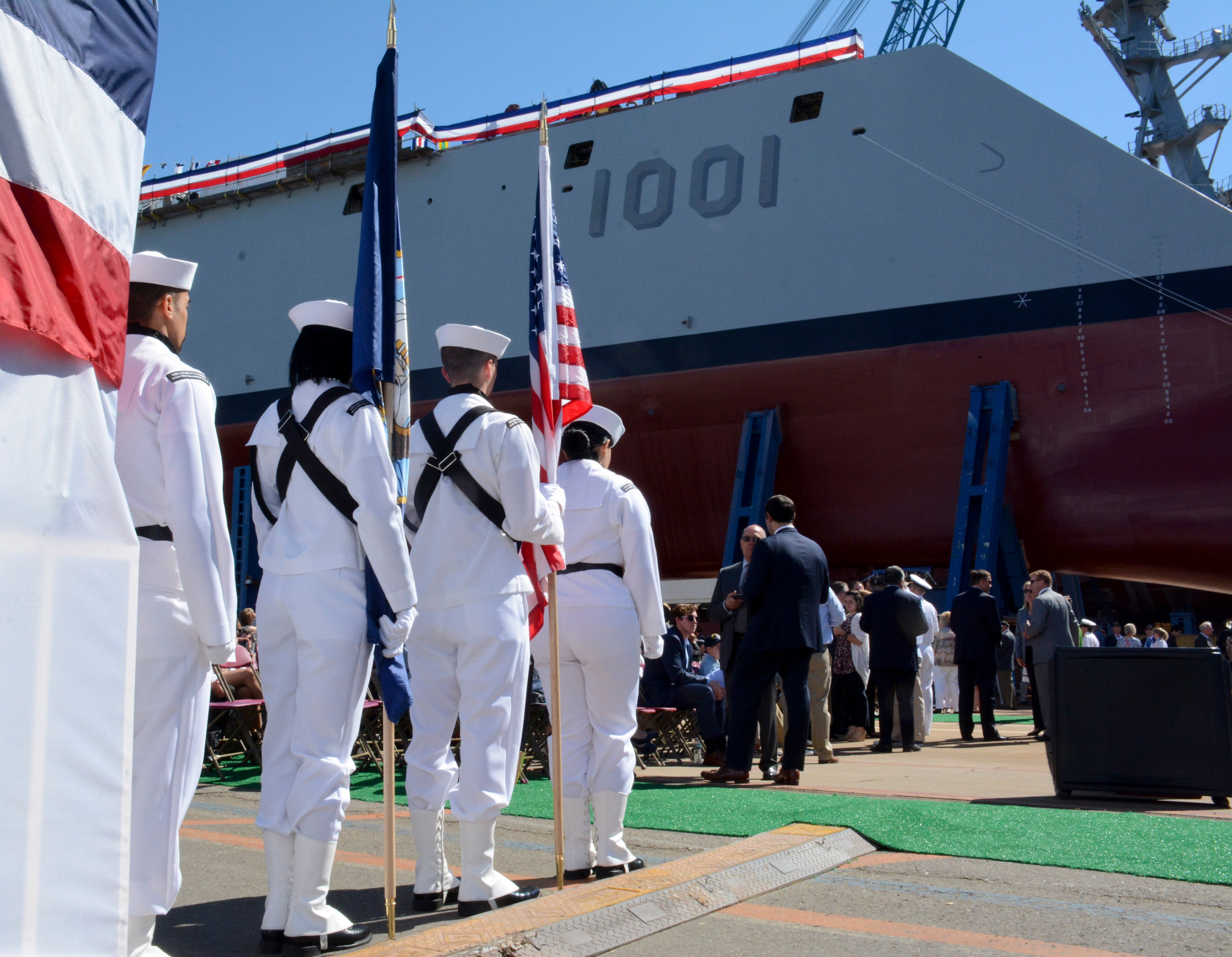 “The committee notes that justification materials, which accompanied the President’s fiscal year 2016 and 2017 budgets, as well as Department of Defense Selected Acquisition Reports for the CVN-78 class aircraft carrier program, list the delivery date of USS John F. Kennedy (CVN-79) as June 2022. However, the Navy plans to deliver this ship in two phases. Phase I delivery, scheduled to complete in June 2022, will deliver the ship with full propulsion capability, aircraft launch and recovery systems, and safe to sail navigation systems. Phase II delivery, scheduled to complete in September 2024, will add the remaining electronics and ordnance equipment, including the Ship Self-Defense System, weapons systems, and Enterprise Air Search Radar. The committee believes CVN-79 delivery should be deemed to occur at the end of Phase II delivery,” according to the Senate report that accompanied the FY 2017 NDAA.

“Similarly, the committee understands all three ships in the Zumwalt-class will employ a dual delivery approach with hull, mechanical, and electrical (HM&E) systems delivery at the shipbuilder in Maine and combat systems activation in California. In the case of USS Zumwalt (DDG-1000), HM&E delivery is scheduled for 2016 and combat systems activation is scheduled for 2018. The committee notes the President’s fiscal year 2017 budget lists April 2016 as the delivery date. The committee believes Zumwalt-class delivery should be deemed to occur at the completion of the dual delivery approach, following combat systems activation,” the report continued.
“The committee is concerned the variance in the Navy’s definition of ship delivery may obscure oversight of the program’s schedule, including whether or not a project has breached its threshold delivery date. The committee is also concerned Navy ships are being delivered in various degrees of completion and then, after a period of availabilities and shakedowns, possibly several years later, the ship is delivered to the fleet for operations. CVN-79 and the Zumwalt-class programs illustrate this practice.”

After the 2017 language became law, the Navy was required to use the full delivery date when reporting to Congress, but it was still entering ships – namely Zumwalt and Michael Monsoor – into the Naval Vessel Register upon HM&E delivery rather than final delivery. This year’s FY 2019 bill put a stop to that practice, forcing the Navy to only add ships to the Naval Vessel Register’s list of battle force ships upon final delivery, when the ship is actually capable of contributing to fleet combat operations.

Navy spokeswoman Lt. Lauren Chatmas told USNI News on Aug. 22 that “the Navy worked closely with Congress as the FY 2019 NDAA was being developed to ensure accurate characterization of the Zumwalt Class of ships (DDG 1000, DDG 1001, and DDG 1002) and CVN-79 and how these ships will be treated in the battle force count. Given the unique ‘phased-delivery’ of these four ships, the Navy will place them in a special status to reflect preliminary acceptance by the Navy from the shipbuilder, and then on completion of the mission systems and final delivery the Navy will count them in the battle force.” 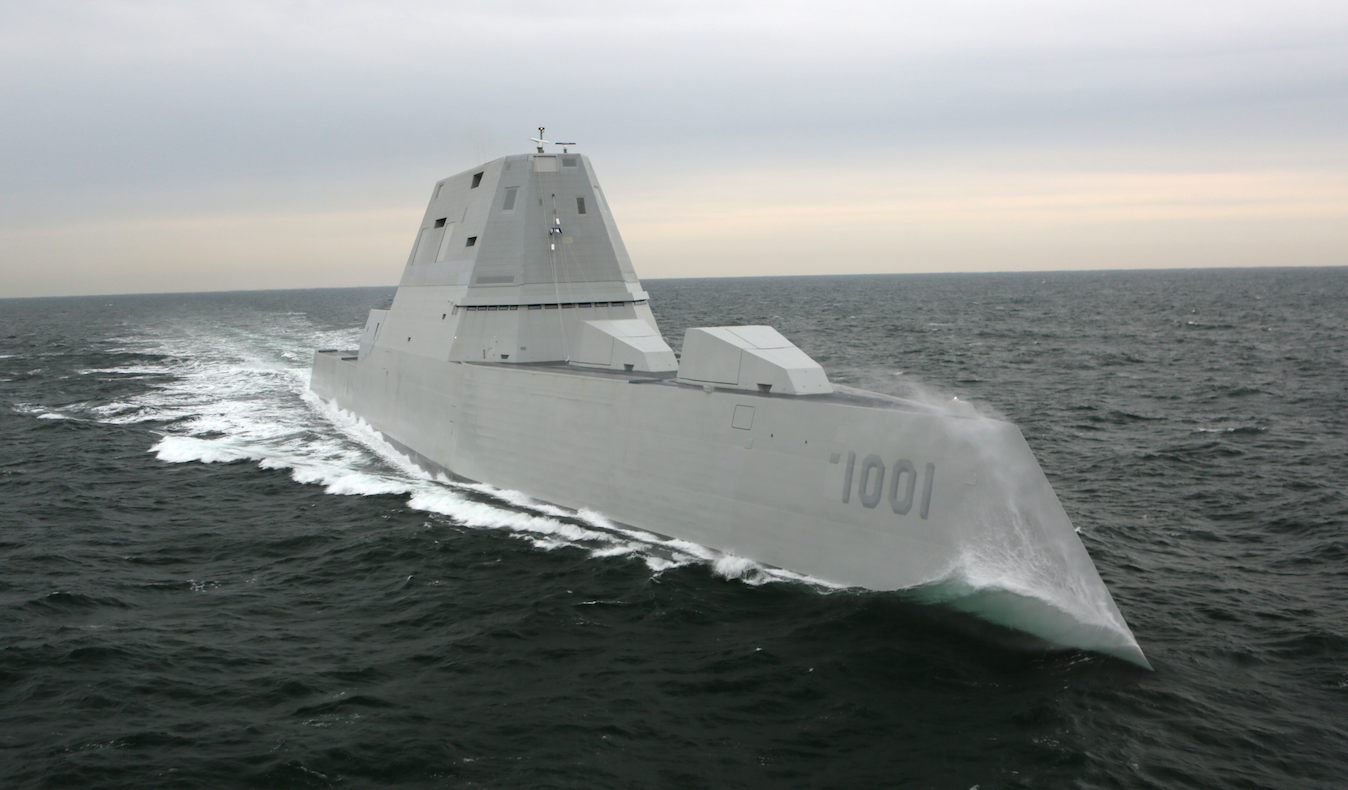 Zumwalt delivered to the Navy in May 2016 and was commissioned that October. It arrived in San Diego in December 2016 to begin its combat system activation, which is about an 18-month process. The destroyer will be homeported in San Diego once the activation process ends – which should happen any time now – and the ship joins the fleet.

Monsoor was delivered to the Navy in April but is still at the Bath Iron Works yard in Maine following revelations that the main turbine engine needed to be replaced after engine blades were damaged during the ship’s acceptance trials. Once that engine work is done, the ship will sail to San Diego sometime this fall to begin its own combat system activation early next year.