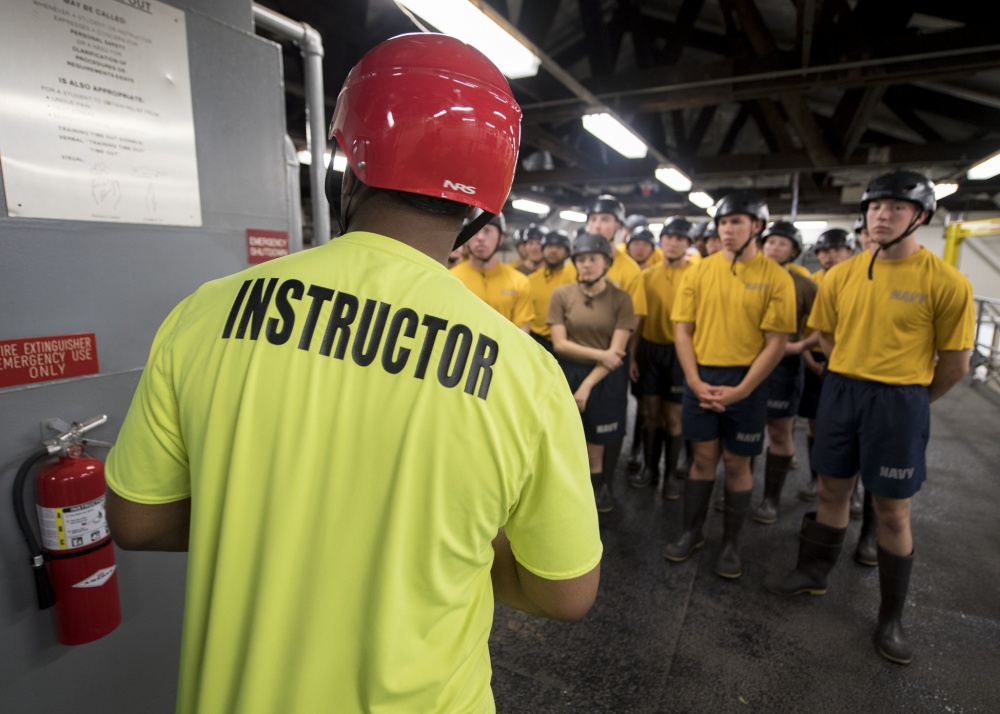 Naval ROTC Midshipmen listen to safety instructions at the USS Buttercup Damage Control Wet Trainer during Sea Trials at Naval Station Newport in Rhode Island. Sea Trials is a 10-day event, during which Midshipmen must perform a series of scenarios and properly demonstrate the skills they have developed throughout their training. Navy photo

THE PENTAGON — Teaching Navy officers and enlisted sailors how to think, not what to think, is the prime focus of an ongoing study that seeks to radically shift how the service educates its personnel.

The Education for Seapower report is expected to provide Secretary of the Navy Richard V. Spencer with a number of recommendations to revamp how the Navy promotes, organizes and encourages continued learning among its ranks.

“It’s a clean sheet review and there’s nothing off the table, absolutely nothing. We’re expecting some very bold recommendations to the Secretary (of the Navy) come early in December,” Steve Deal, executive director for the Department of the Navy’s Education for Seapower study, told USNI News.

Undersecretary of the Navy Thomas Modly, who announced the study in April, has made revamping Navy education a primary goal for his office. Signifying the importance of education, Modly frequently invokes the motto of his alma mater, the U.S. Naval Academy – Ex Scientia Tridens — which roughly translates to through knowledge, sea power.

Deal, a retired Navy captain, is shepherding the work from a Pentagon office suite a few doors away from Modly’s office. So far, the study group has met four times and received presentations from civilian scholars, futurists and the heads of all Navy educational institutions, including the U.S. Naval Academy, the Navy War College, Naval Post Graduate School and the head of the Reserve Officer Training Corps. Several dozen other experts have been interviewed by members of the study team.

The discussions will become the basis of the study group’s final report. The supporting documents provided to the group will also be part of the final report, which will be released to the public following the Secretary of the Navy review of the findings.

Instilling critical and strategic thinking skills among the ranks of enlisted and officers is emerging as among the study’s main themes, now that it has passed the half-way mark on its mandate to produce recommendations to Modly’s office in December.

Recommendations will not be finalized for several weeks. However, USNI News understands wargaming and exercises will likely play a prominent role in the study’s recommendations for teaching critical and strategic thinking.

Also likely to be included will be suggestions about preparing sailors to incorporate emerging technologies into naval operations. As the study team considers what future threats and engagements will look like, and the tools needed for these scenarios emerging technologies will likely be considered vital to maintaining a U.S. competitive advantage.

The Navy is already working on establishing ready, relevant learning to train sailors in a variety of skills. The idea is to provide training to sailors at the waterfront using computer-based courses, at points in their careers when skills are needed.

In terms of future engagements, the National Defense Strategy (NDS), released in January, hints at the importance of using new technologies to help the U.S. military maintain a competitive edge against near-peer powers possessing resources that are far better than what the U.S. military has faced recently.

“Today, we are emerging from a period of strategic atrophy, aware that our competitive military advantage has been eroding,” the NDS states.

This is a shift from recent engagements, where U.S. military technological dominance was all but assumed. With Russia and China increasingly using their militaries to exert their influence in their regions, the U.S. military’s period of entering conflicts where battlefield dominance was assumed is over.

When announcing the Education for Seapower study, Modly stressed education was going to be a vital part of fulfilling the NDS’ call to sustain military advantages globally and in key regions.

“Continuous learning — and sharing hard-won knowledge – represents a combat-proven key to victory for our naval services,” Modly wrote in his memo announcing the study’s formation.