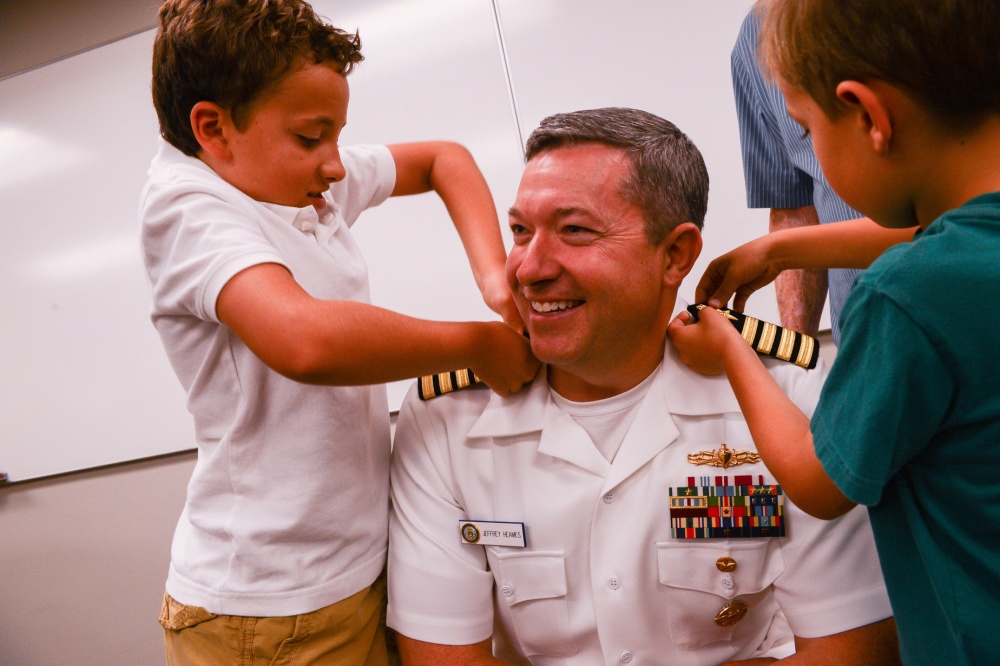 Capt. Jeff Heames, director of operations and training at Naval Surface and Mine Warfighting Development Center (SMWDC), smiles as his sons affix captain’s shoulder boards to his uniform during his promotion ceremony on board Naval Base San Diego. US Navy photo

The most significant changes in nearly 40 years to Navy officer promotions and retention have cleared Congress and are awaiting President Donald Trump’s signature.

The NDAA, which the Senate approved this week after a House vote last month, contains a myriad of authorizations for the Pentagon, including long-sought changes to the Defense Officer Personnel Management Act (DOPMA).

Once signed into law, the Navy will be authorized to commission new officers with vital skills at higher ranks than before, allow officers who do not promote to continue serving and make it easier for officers to take breaks from service.

Top Navy officials believe such changes are important to retain the best leaders. Secretary of the Navy Richard V. Spencer, for example, has often mentioned DOPMA changes as being an integral part of a variety of broader reforms to Navy operations.

DOPMA was cited by Spencer when discussing a strategic review of Navy operations he ordered following last summer’s pair of deadly collisions involving two guided-missile destroyers and commercial ships. Speaking at the USNI Defense Forum in December, Spencer said the review was “still forthcoming, but we are looking at everything – and I do mean everything: from DOPMA, to Fleet Forces structure, to Goldwater-Nichols (Act of 1986, which streamlined military command).”

Passed in 1980, DOPMA sets a rigid structure of year-groups for the ranks of ensign to captain (O-1 to O-6), which organizes officers in each year-group by the date they were commissioned instead of by merit. DOPMA also established the “up-or-out” system, forcing retirement of officers who are not selected for promotion.

The push to reform DOPMA dates back to at least 2014, when Vice Chief of Naval Operations Adm. Bill Moran, then the chief of naval personnel, was working with Congress to consider updating the law. Moran, in a USNI News article, cited the policy requiring officers to either promote or leave active duty service — the “up-or-out system” — as being particularly rigid and worth reconsidering.

Once signed into law, the NDAA offers Navy and other service leaders new flexibility in promoting and retaining officers by authorizing changes such as those Moran discussed in 2015. Navy officials told USNI News the pending authorities, once signed into law, will:

Since the NDAA has not yet been signed into law by the president, Navy officials declined to comment on the newly passed legislation at the time of posting. But leaders have been very vocal in the past about the need to reform DOPMA.

A long-standing complaint of DOPMA was its rigid guidelines. The Navy has had some flexibility with retaining enlisted sailors who do not promote, but “DOPMA gives us no choice on the officer side,” Vice Adm. Robert Burke, chief of naval personnel, said in May at the Sea Air Space 2018 Expo. “The only alternative on the officer side, with DOPMA, is to get out. Is that what we want?”

Burke continued pressing the point his predecessor Moran had been making years earlier, about how subtle congressional changes would significantly improve the ability of service branches to retain officers.

In May, Burke said the Navy preferred a system allowing officers to promote up and stay, or move into the reserve force but be allowed to quickly return to active duty if needed. He even suggested it would be worth allowing officers to leave the service entirely but make it relatively easy for them to rejoin the Navy at a later date, especially if in the interim they acquired new skills or valuable civilian workplace experience.

“We don’t see up-and-out as being the core,” Burke said in May.