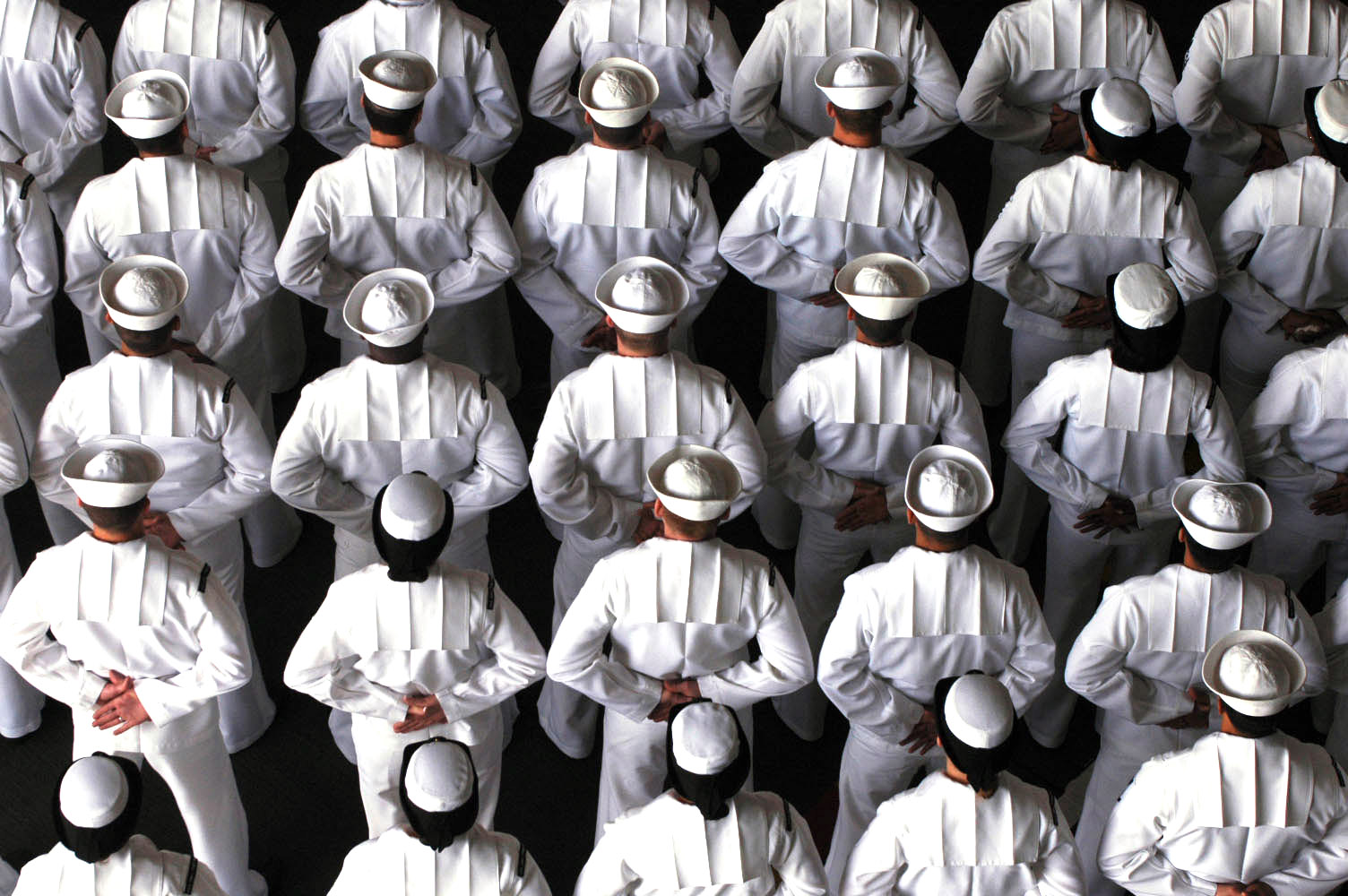 Sailors stand in formation during a change of command ceremony held aboard the Nimitz-class aircraft carrier USS John C. Stennis (CVN-74) in 2006. US Navy Photo

The Navy is asking Congress to expand a pilot service sabbatical program ahead of a broader slate of internal personnel reforms Secretary of the Navy Ray Mabus is expected to announce next month.

The expansion of the Career Intermission Program from a pilot project that gives the opportunity for sailors to transition from active duty to the reserves for three years is designed to make the Navy a more attractive career option for the service’s most talented, the Chief of Naval Personnel told USNI News in an interview last week.

“Frankly when you look at the pool of people that is available to recruit to do this work, it’s shrinking and we’re in competition with industry and corporate America others and we have to do a better job,” CNP Vice Adm. Bill Moran said.

The first step would expand the pilot CIP from the current limit of 40 sailors per year.

Following expanding the numbers, “the second part is to lift the restrictions of the folks that are on the minimum service requirement (MSR) . So take an aviator that’s on an eight-year MSR, they cannot even apply to this program until they are done with that eight year MSR — surface warriors five years, [a] submariner five years,” Moran said.
“The third part of this is to remove the restriction of anyone that’s under a critical skills retention bonus. We would allow those people to be also able to apply and we would freeze the bonus until they’re complete with the program and pick it up back later so that we still get our money’s worth for people in this program.”

Service leaders beyond Moran have said allowing top preforming sailors more flexibility to choose their path in the service outside of their year group is positive.

“We come in and we’re sort of in a conga line. What year group are you in? In whatever amount of years, you will make J.G., lieutenant or whatever. It doesn’t really matter how talented you are, for a while,” Chief of Naval Operations Jonathan Greenert said last month during the roll out of Navy, Marine Corps and Coast Guard revision of its cooperative maritime strategy.
“We’ve got to work our way out of the year group mentality, get some flexibility into that, allow them to blossom and take maybe some time to go off and do other things somewhere else in the career.”

The ultimate goal for the service would be to eliminate the year group concept following the first few years sailors are in — for enlisted its End of Active Obligated Service (EAOS) , for officers, the MSR.

“You can think of this in terms of people that go before promotion boards and how they come out of those promotion boards in terms of when we promote them based on the level of performance,” Moran said.
“In other words, not all lumped together by their year groups. There are other ways to deal with the year-group challenge inside the current policy and authorities we have to work with.

He added, “we’ve given the secretary some thoughts trying to consider on how to ratchet up a commanding officers ability to recognize talent when they see it.”

Moran wouldn’t detail specifics of the effort ahead of their approval by Mabus.

However, USNI News has learned of some of the changes the service is considering, including:

The first set of internal changes could happen as part of the Navy’s Fiscal Year 2016 promotion board guidance, USNI News understands.

The internal Navy changes are happening in parallel with a wider push from the Pentagon to get and keep the best troops for the U.S. military.

Secretary of Defense Ash Carter outlined a similar set of initiatives at Abington Senior High School in Pennsylvania in a March 30 speech.

“As the so-called 9/11 generation begins to leave our ranks, the Defense Department must continue to bring in talented Americans, from your generation and others,” Carter said.
“We have to look at ways to promote people based not just on when they joined, and even more on their performance and talent.”

For officers it would be changes to the Defense Officer Personnel Management Act of 1980. DOPMA (pronounced DOP-Mah) outlines a rigid structure of year groups from the ranks of ensign to captain (O-1 to O-6) and a so-called “up-or-out” structure that forces retirement on an officer passed over for promotion.

Moran said Carter’s remarks and the signals he’s seen from the Office of the Secretary of Defense (OSD) are leaning toward broader legislative moves to reform DOMPA and changes to the Goldwater–Nichols Department of Defense Reorganization Act of 1986.

“[Carter’s] talked about — and I’ve even heard Sen. [John] McCain (R-Ariz.) talk about — this reevaluating the impacts and the future of Goldwater-Nichols, looking at DOPMA reform, looking at year group management,” Moran said.
“Those are things coming from leaders way above my paygrade and I’m encouraged by that dialogue.”