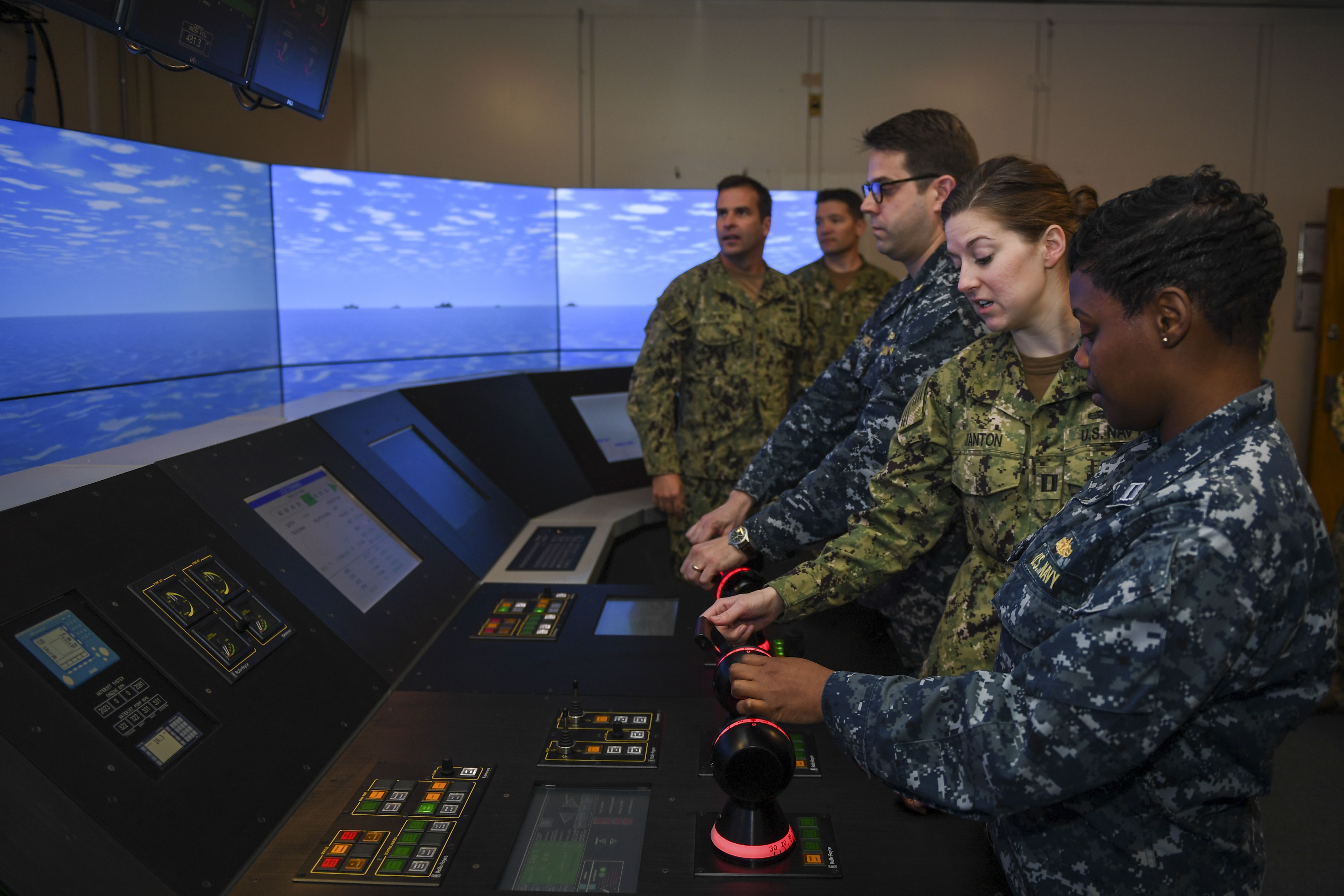 Lt. Caroline Stanton, an instructor at the Littoral Combat Ship Training Facility aboard Naval Station Mayport, teaches Sailors how to simulate navigating an LCS as part of a tour for the annual Reserve Leadership Symposium hosted by Littoral Combat Ship Squadron (LCSRON) 2 on Jan. 26, 2018. US Navy photo.

Future classes of surface ships ought to come with advanced training systems that allow maintenance sailors to practice hands-on troubleshooting, much like the trainers for the Littoral Combat Ship and the DDG-1000, the Program Executive Officer for Ships said last week.

Rear Adm. William Galinis said at a Navy League breakfast event that the Navy’s training of sailors, and maintenance sailors in particular, has changed over the years. Going forward, he said, it would be important to promote hands-on learning over computer-based learning for certain types of personnel.

“This particular session was on engineering training. … I’ll go back now to [retired Vice Adm. Phillip Balisle’s] report that came out in the [2010] timeframe – and he listed a number of very specific items in terms of things that kind of atrophied over time in terms of maintaining the readiness of our surface fleet, and training was one of them. And at that point the Surface Warfare Officer School Command really embarked on a path to improve the training. And where we had kind of gotten away from a lot of the schoolhouse, hands-on type training and moved to the computer-based training that you love or hate, depending on where you sit, we realized that that wasn’t the best way to probably train some of our sailors … especially when it comes to the maintenance, the troubleshooting, the repair aspect we ask our sailors to do, particularly the engineering trades.”

Galinis later told USNI News, on new ships, “one of the things that we’ve really kind of come to understand is that, especially for sailors that are maintainers that troubleshoot and repair those systems, you really need a little bit more advanced training than just a computer-based training course or reading a tech manual of some sort. That’s where that hands-on training really comes into play. So shore-based training, and we’ve really leveraged that.”

Galinis noted that the Surface Training Systems Program Office (PMS 339) manages trainers for new ship classes, including the LCS and Zumwalt-class destroyer (DDG-1000). For future classes of ships, he said, that organization would be involved early on and “I think that [type of trainer] will be a key component of any training strategy going forward for a new class of ship.”

The admiral added that other decisions, such as using existing hull forms for new purposes – like using the San Antonio-class amphibious transport dock (LPD-17) as the basis of the LX(R) dock landing ship replacement, now called LPD Flight II – would also contribute to improved training because mature training pipelines could be leveraged instead of having to start from scratch.

“Where we had put new training courses and new training opportunities for sailors on the LPD-class ship, those are easily transferable to the Flight II,” Galinis said.