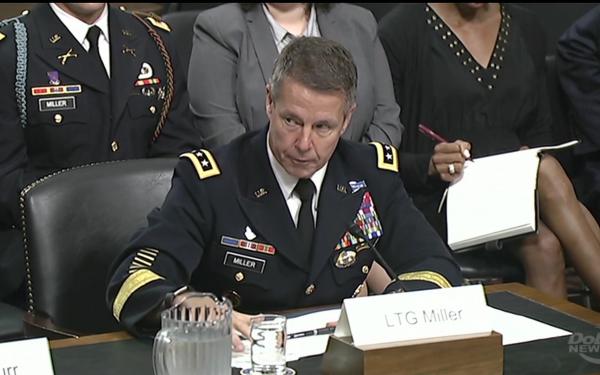 The nominee to lead American and coalition forces in Afghanistan said the key to safely withdrawing U.S. and coalition troops lie in reaching a political solution among the disparate parties and not simply disrupting Taliban operations or hunting down terrorist groups like the Islamic State, al Qaeda or the Haqqani Network.

Testifying before the Senate Armed Services Committee Tuesday, Army Lt. Gen. Austin “Scott” Miller said repeatedly he didn’t see an end to the American 17-year involvement in Afghanistan coming soon. U.S. troops arrived in Afghanistan within a month of the terrorist attacks on Sept. 11, 2001, on the United States.

“I can’t guarantee you a timeline or end date… for any withdrawal,” he told the panel. The “underlying challenges” of corruption and incompetence among Afghan officials, as well as the dangers of the Taliban internal insurgency and the moves of terrorists against the United States and its allies and partners “will have to be addressed” before a political solution can be reached.

Miller, with a background in Special Operations, would be the ninth American commander in Afghanistan, and he has already served there for four years. He said the goals for withdrawal remain much the same as they were when the United States first committed forces to Afghanistan: to ensure the country is not used as a safe haven for terrorist organizations like al Qaeda to launch catastrophic attacks on the United States and partners.

He said there has been progress in that direction with the new strategy with its adding more troops from the United States and NATO, the stepped-up bombing of Taliban targets and more pressure on Pakistan to be a good neighbor to the Afghan government.

Miller told the panel another strength of the strategy lays in having “taken time off the table” as to when the commitment to stabilize and secure Afghanistan would end.

Hardening the Afghan security forces in the coalition’s train-advise-and-assist mission is a step in the right direction and Miller told the panel he would look at bolstering Kabul’s special operations forces and also its Air Force’s close air support capability.

He also mentioned the necessity of keeping up the pressure on how the Taliban and others are financing their operations.

“With any insurgency, you have to go to the financing,” he said.

Later, in answer to another question, he added, “you put money where you know you’ll have results,” he said. This answer was in line with the most recent Special Inspector General’s report on Afghanistan.

Miller said that he would get back to the committee with fresh assessments of troop levels and progress. During the hearing, several senators said the government in Kabul controls about 60 to 65 percent of the country and about a quarter of it is contested. Casualties among Afghan security forces and desertions also raised senators’ concerns about Kabul’s ability to keep up the pressure on the Taliban and control territory it has either lost or never truly controlled without new outside aid.

Miller emphasized he didn’t want to overstate the case of the long-term benefits of the recent ceasefire between the Taliban and the government following the end of Ramadan. But he added several times in similar phrasing to more questions that “anything that lowers the violence … is a goodness. There has to be a political solution” to the fighting in Afghanistan.

As for Pakistan working vigorously to eliminate the safe havens for the Haqqanis and others inside its borders, Miller said only the United States and Afghanistan “ought to have very, very high expectations of them.”

When pressed on whether Pakistan and Afghan are conducting joint operations against the Taliban and terrorists, Miller said he would characterize it as cooperating together.