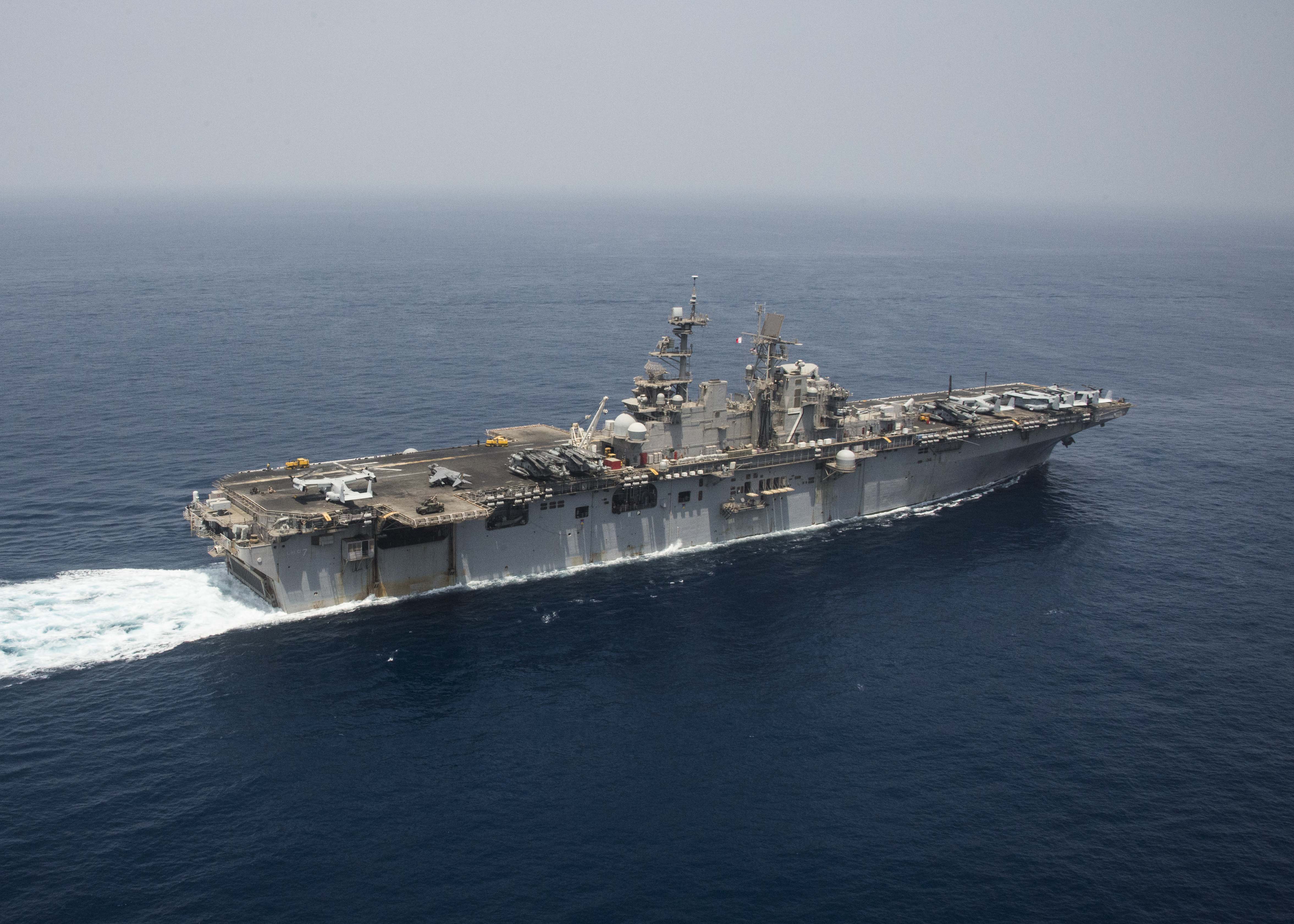 THE PENTAGON – Amphibious warship USS Iwo Jima (LHD-7) crossed into the Persian Gulf this week, returning a U.S. Navy capital ship to the region for the first time since late March, USNI News has learned.

The two-and-a-half-month gap between the arrival of Iwo Jima and the March departure of aircraft carrier USS Theodore Roosevelt (CVN-71) is the longest gap the Navy has had without a capital ship — a carrier or a big-deck amphibious assault ship — in the Gulf in recent memory.

When USS Nimitz (CVN-68) departed the Gulf in October, amphib USS America (LHA-6) passed through the Strait of Hormuz into the Gulf a few days after. In 2015, a two and a half month gap between the departure of the Roosevelt CSG and the arrival of the Harry S. Truman CSG was covered by initial strike sorties from Marine Harriers on USS Kearsarge (LHD-3) and the French aircraft carrier Charles de Gaulle.

When contacted by USNI News, service representatives declined to elaborate on the move of Iwo Jima.

For the last several weeks, U.S. naval power has been focused in the Mediterranean and Baltic seas in U.S. 6th Fleet rather than in the Middle East and 5th Fleet. The Harry S. Truman Carrier Strike Group that left the U.S. in mid-April with a larger-than-average number of escort ships still remains in 6th Fleet. The Truman CSG has been launching strikes against Islamic State targets from the Eastern Mediterranean, compared to the Theodore Roosevelt CSG doing so from the Persian Gulf during its deployment. Additionally, the two other ships in the Iwo Jima Amphibious Ready Group – USS Oak Hill (LSD-51) and USS New York (LPD-21) – are operating in the Baltic and Mediterranean seas respectively, along with the embarked 26th Marine Expeditionary Unit spread among the three ships.

The recent emphasis of forces in and around Europe and Northern Africa are indicative of how the Navy is deploying forces differently since the rollout of new strategic guidance from the Pentagon in January, two Navy officials told USNI News on Thursday.

Acting under Secretary of Defense James Mattis’ mandate to be “strategically predictable and operationally unpredictable,” the Navy has been experimenting with the idea of “dynamic force employment.” Unlike past deployments, where East and West Coast carriers moved to the Gulf, operated for three months and then returned to their respective homeports, the new dynamic force employment model would attempt to take the predictability out of the deployment schedule.

“If you think about all the ways you could increase the power of the Navy, it’s not necessarily going forward, disaggregating the strike group and doing those sorts of operations,” Chief of Naval Operations Adm. John Richardson told USNI News last month.

Part of the new model is to emphasize preparing for higher-end warfare against great power adversaries like Russia and China, which is arguably easier the more expansive water of the Mediterranean versus the much more narrow Persian Gulf.

“It’s an aspect of the security environment that it’s getting harder to do things without being observed, no matter where you are. So we’re going to have to be clever about that,” Richardson told USNI News last month, who suggested that conducting high-end training in a less-predictable manner while overseas or making more forces available to train back at home would be required.

The presence of a U.S. capital ship in the Gulf – usually a carrier — has been a near constant since the terror attacks of Sept. 11, 2001.

Sorties from carriers in the Persian Gulf at one time accounted for a third of the strike missions over Afghanistan during Operation Enduring Freedom. When Secretary of Defense James Mattis was the head of U.S. Central Command, he pushed to have two carriers strike groups in the Gulf in order to support the OEF mission and act as deterrence to Iran, whose fleet of small boats was actively harassing naval and merchant vessels at the time.

Following the implementation of the Budget Control Act, in 2013 the Navy pared down its carrier presence in the Persian Gulf. Around the same time, the air war in Afghanistan began to draw down, and naval aviation instead focused on strikes against Islamic State targets in Iraq and Syria. In addition to a shift in air missions for the U.S., Iranian small boat harassment has dwindled since a 2016 spike which could, in turn, reduce the need for a larger U.S. Navy presence in the region. Instead, Tehran has increased its use of unmanned aerial vehicles in the region.