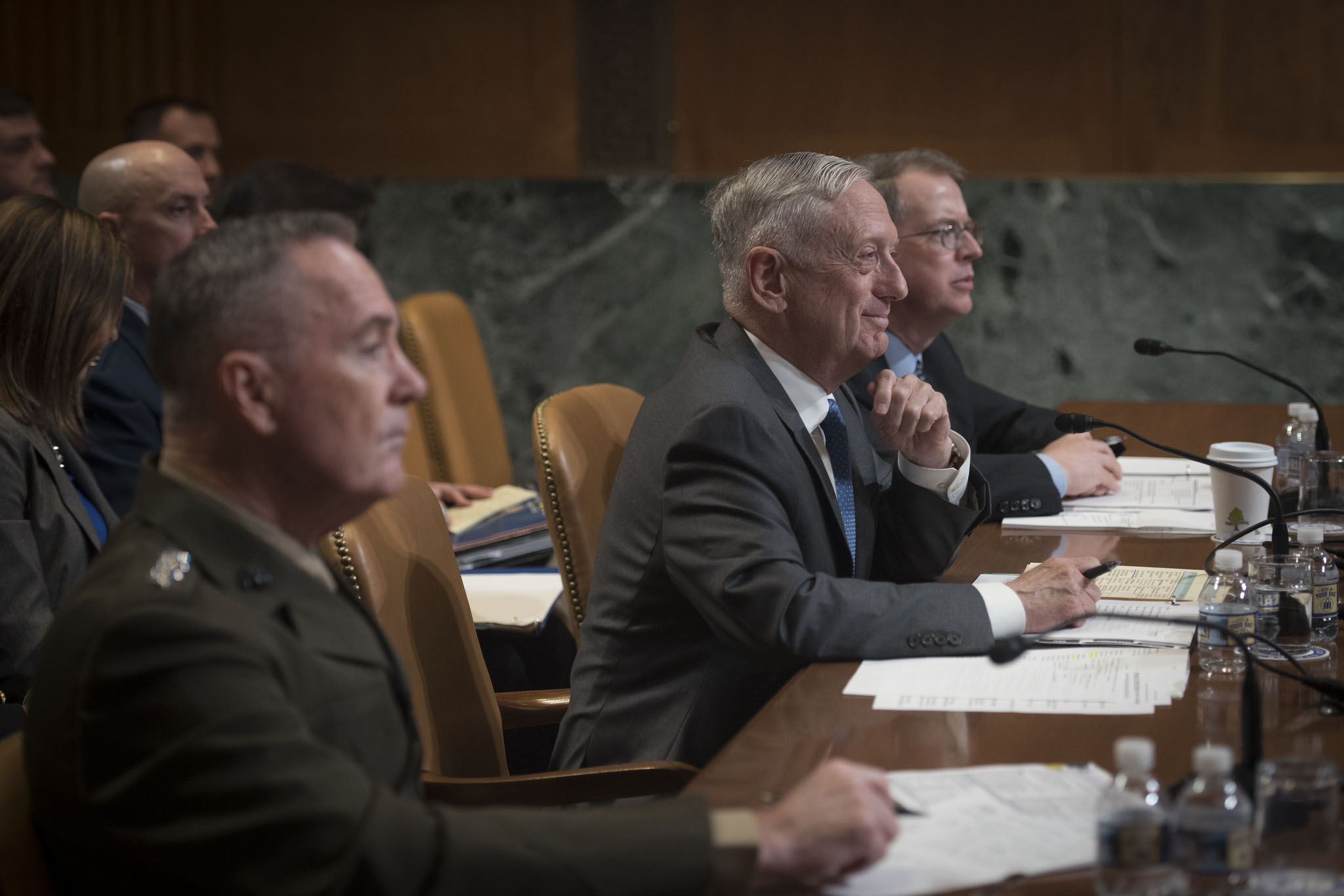 From the left, Marine Corps Gen. Joe Dunford, chairman of the Joint Chiefs of Staff; Defense Secretary James Mattis; and David Norquist, Defense Department comptroller and chief financial officer; give testimony on the DoD budget posture on May 9, 2018. DoD photo.

Mattis, speaking to the Senate Appropriations defense subcommittee Wednesday, said having a stash of low-yield nuclear weapons would negate Russia’s plan to “escalate to de-escalate” tense confrontations in its favor. As matters stand now, he reminded the subcommittee, the United States’ only nuclear response to a low-yield first strike by Russia would be with high-yield weapons, which would lead Russia to respond with similar weapons – with the result being catastrophic for both nations and the world.

He added that the idea behind the U.S. move to develop low-yield nuclear weapons “is making sure our deterrent is fit for its time.”

Answering a question, Mattis said the development of the low-yield weapons did not violate existing treaties covering strategic arms. “What we’re doing is in compliance with the nuclear non-proliferation treaty.”

“Modernizing the nation’s nuclear deterrent delivery systems and our nuclear command and control is our department’s top priority,” Mattis said in his opening statement. During later questions about the cost of that modernization, he said it currently stood at about 4 percent of the Pentagon budget and would rise to about 6.3 percent – both of which he deemed affordable.

As for the Nuclear Posture Review’s reception among America’s allies – including the notion of developing the low-yield weapons – “it has been welcomed by them” in Europe and the Indo-Pacific, the secretary told the subcommittee.

Another key topic discussed at the hearing was how the war in Afghanistan has evolved in the last 17 years.

Since then, a Taliban resurgence has taken control of districts and provinces and is contesting even more regions.

Now the idea of “by-with-and-through” operations – with experienced American and NATO forces training and advising Afghan troops –will give the Afghan security forces the capabilities to bring the Taliban to the bargaining table, Dunford said.

Mattis said the Pentagon is looking for quality Afghan police and national security forces to work with and is enforcing “strict accountability; there will be no ghost soldiers,” or names on rosters for individual who don’t exist or don’t report for duty. Mattis later noted that “we’re going to vet the troops we’re working with” to ensure their loyalty to the Afghan national government.

“We will end up with more capable forces in the field,” even with a slight decline in their numbers, he said.

As to the situation on the ground today, Mattis said “violence and progress are co-existing.” The Taliban “went to bombs” on soft targets such as voter registration sites and markets because they were unable to prevail on the battlefield. With parliamentary elections scheduled to take place in October, registration sites have become targets for terrorist strikes. With these bombing attacks killing civilians, the insurgents’ “idea was to set a condition to wear our patience thin” and and to discourage Afghans in continuing support for Ashraf Ghani’s government.

In assessing the global security situation, Dunford said in his opening statement, “the United States military has a competitive advantage” over any adversary, from near peers like Russia and China to regional powers Iran and North Korea to terrorist organizations.

Mattis noted that the Fiscal Year 2019 budget requests more than $654 billion in program spending and an additional $11 billion in military construction. Additional funds are requested for overseas operations, including $5.2 billion for Afghanistan.

“We’re going to fix the problem” of auditing how that money is spent, Mattis added. He pledged to be “impatient and intolerant” in that regard and preemptively deliver any bad news on spending to Capitol Hill.

When asked about continuing resolutions’ impact on defense programs, Mattis said, “we’re going to have to get back to regular order,” meaning pass budgets at the start of the fiscal year on Oct. 1. Otherwise, “you’re putting us right back in the hole you had to dig us out of [with the two-year budget agreement calling for increased Pentagon budget]. …We want Congress in the driver’s seat.”

Also at the hearing, without going into detail, Mattis said the department will be presenting its Cyber Posture Review within a few months. Likewise, Dunford said the services are addressing the problem of manufacturing protective equipment specifically for women.