A recently returned U.S. commander in Afghanistan gave an optimistic assessment of the combined progress of U.S. and Afghan forces against the Taliban.

Newly-installed provincial leaders fixed on bringing the Taliban to heel and the coalition commitment to provide assistance in changing the situation on the ground, the Marine Brig. Gen. Roger Turner Jr. who commanded Task Force Southwest said on Friday at the Brookings Institution.

The new provincial leadership was unwilling to accept the status quo of impassable roads, closed airports and the Taliban’s proclamation in 2017 to make Lashkar Gah, the capital of a new Islamic caliphate.

“We’re seeing great success in Helmand in the last year,” he said.

About half of the 300 Marines that he commanded in Helmand were assigned train and assist mission; the other half included rifle and artillery units that supported Afghan operations.

The Afghan forces know they can operate more professionally than the Taliban, giving the police and the army more confidence in what they were assigned, Turner said. The evidence of improvement is showing up in lower casualty rates and drops in desertion.

The result is dramatic: changing demoralized security forces into troops and national police operating with skill.

“Afghan forces, if properly enabled, will defeat the Taliban at the point of attack,” he said. 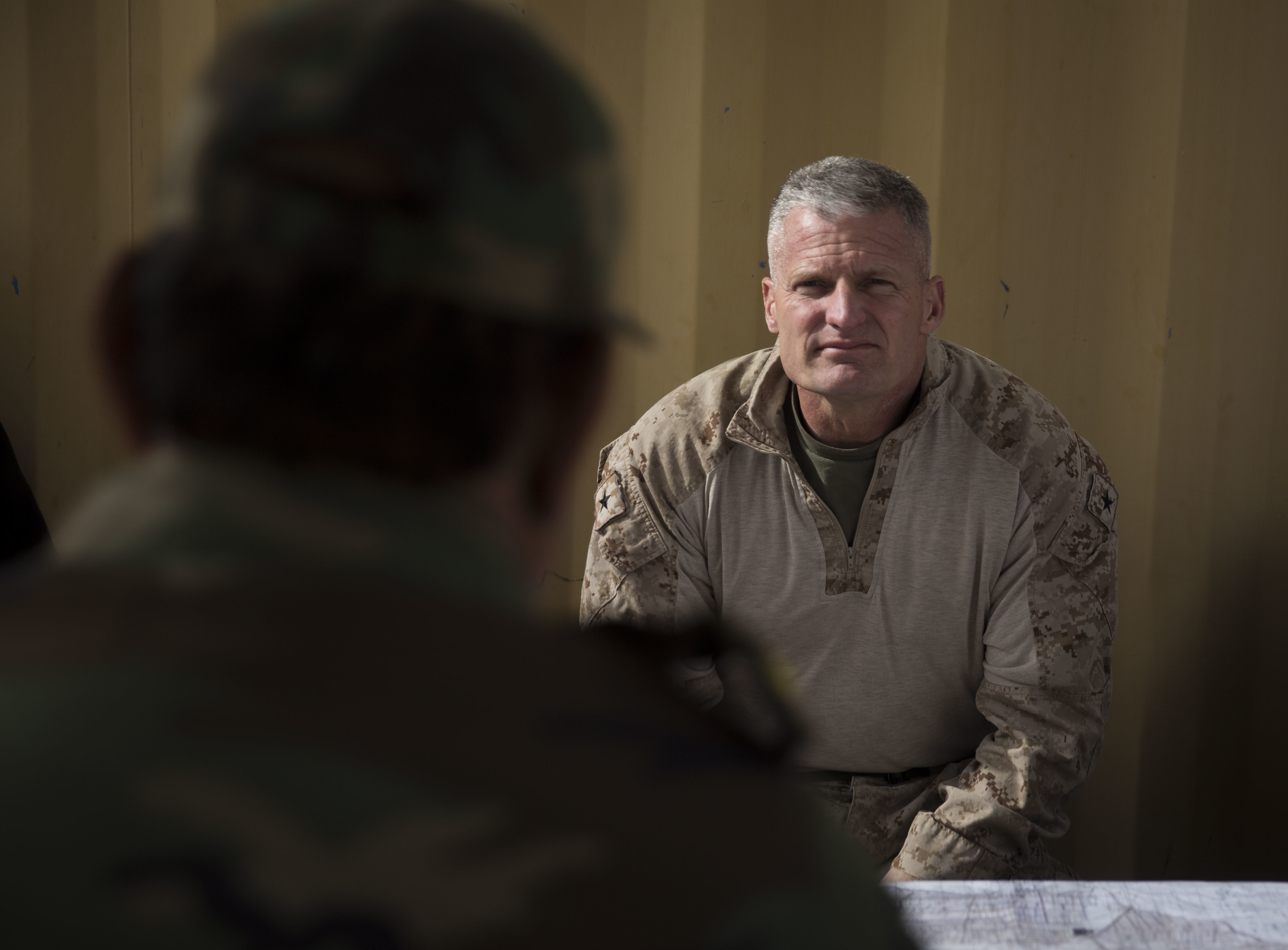 Marine Brig. Gen. Roger Turner, the commanding general of Task Force Southwest, listens to Afghan National Army Brig. Gen. Abdul Raziq Hotak, the commander of the 1st Brigade, as he details his course of action over the next few days for operation Maiwand 10 in Helmand Province, Afghanistan, Dec. 26, 2017. US Marine Corps Photo

That does not mean having the Marines do for the Afghans what must be done. It is a balance — such as integrating the intelligence gathered by the Afghans with that gathered by the Americans; coordinating the air operations of Afghan fixed wing and helicopters with American attack aircraft, including B-52s; and working together on sustaining the forces on the air and ground. It also means avoiding creating a dependency and what is the second and third order of effects” if the Americans intercede in an operation and future missions.

The idea from the Afghans is now to develop a plan that was executable to create an overmatch and achieve the mission.

With that combination, the Afghan national forces “could beat the Taliban any day,” he added. Turner said the idea is to build a force that can sustain government control.

The impact of these changes on improving Afghan police and army operations that meet with success upon contact has forced the Taliban away from trying to hold territory and govern in Helmand.

“I think we should drive toward that but we don’t want to do anything that the Afghans can’t sustain,” he said.

“Things are functioning now in the province; this time last year, they were not.”

Helmand was also where the Taliban movement started among its Pashtun population that eventually took control of Afghanistan and provided sanctuary for al Qaeda to carry out the Sept. 11, 2001 terrorist attacks on the United States.

Turner, in his “under the hood” explanation of the “by, with and through” assistance project, said “Central Helmand is most important” to success for the national and provincial government. “It’s where most of the population lives.”

The province’s population is estimated to be about 880,000, and it also is a relatively flat, prime agricultural region that is well irrigated producing large legal crop harvests and much poppy. It is a region well familiar to Marines, including Turner who served there eight years ago as a colonel. Thirty-thousand Marines were assigned to Helmand from 2010 to 2014, alongside 10,000 British troops.

As for the advisers themselves, “we took Marines and sailors essentially out of the conventional force.” Turner said, “A lot of this is inherent [skill and training existing] in the force.”

To get after a source of income that allows the Taliban to continue fighting, Turner said the authorities granted American forces under the new strategy allows operations “where we could see a clear connection between opium production and the Taliban.” In these operations, the Afghan army seizes territory, assisted by Afghan and American special forces where needed “and you put counter-narcotics on top of that” to curb the trafficking.

He said in answer to a question that in some cases the Taliban in Helmand is given arms and ammunition from neighboring countries, such as Pakistan, and in other cases, they buy what they need using the money gained from narcotic sales.