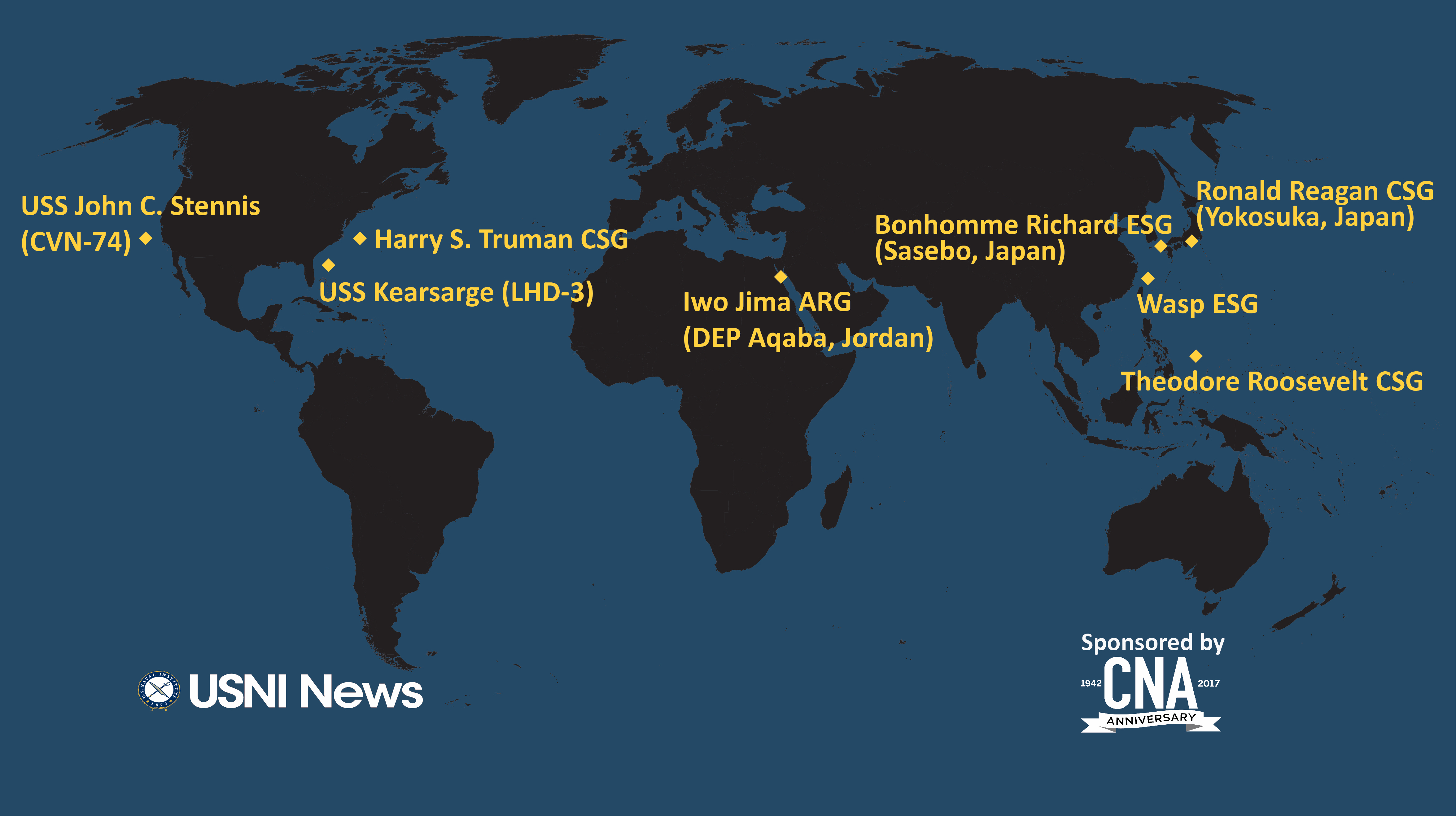 These are the approximate positions of the U.S. Navy’s deployed carrier strike groups and amphibious ready groups throughout the world as of April 16, 2018, based on Navy and public data. In cases where a CSG or ARG is conducting disaggregated operations, the map reflects the location of the capital ship.

USS Winston Churchill (DDG-81) deployed April 5 from Norfolk, Va., and was en route the area to join USS Donald Cook (DDG-75) in the Eastern Med. These ships did not participate in the attack, though there are press reports that they were part of a deception plan to distract Syrian and Russian forces. 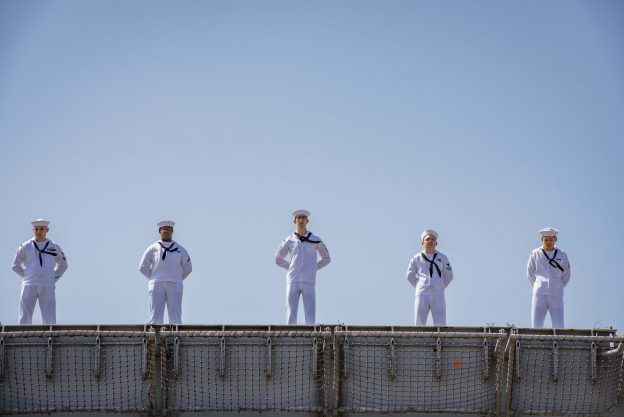 Sailors aboard the aircraft carrier USS Harry S. Truman (CVN-75) man the rails during the departure for their 2018 deployment on April 11, 2018. US Navy Photo

The Harry S Truman Carrier Strike Group deployed from Norfolk on April 11 and is headed east. The CSG is scheduled to operate in both the U.S 6th Fleet and 5th Fleet areas of responsibility while deployed. 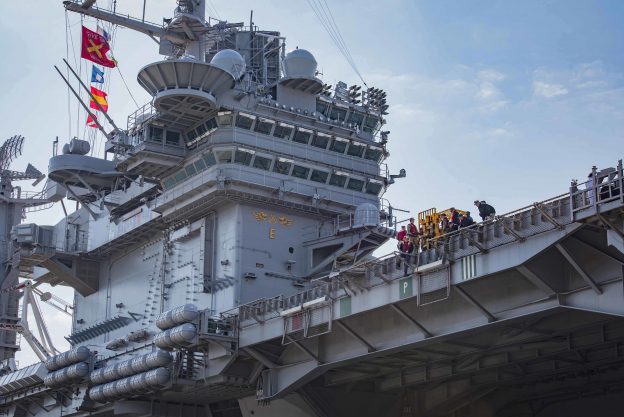 Sailors of assigned to the aircraft carrier USS Harry S. Truman (CVN-75) prepare the ship to depart for its 2018 deployment. US Navy Photo 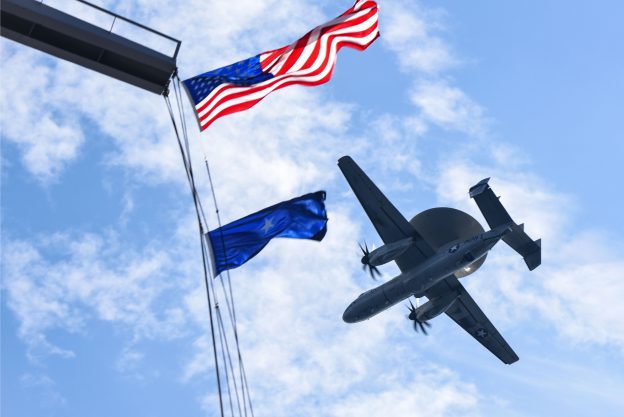 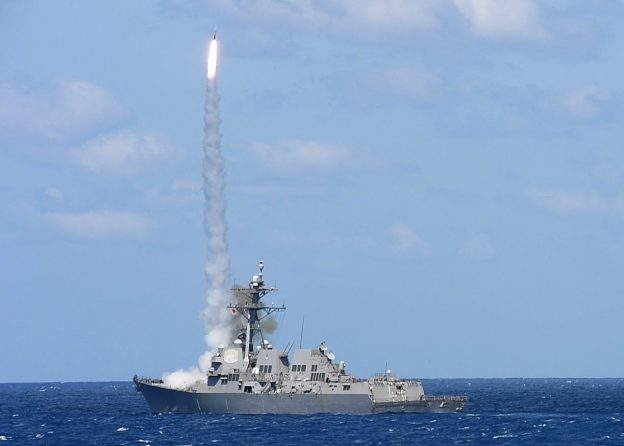 Guided-missile destroyer USS Jason Dunham (DDG-109) and USS The Sullivans (DDG-68) are slated to deploy at a later date and will join the strike group in theater. 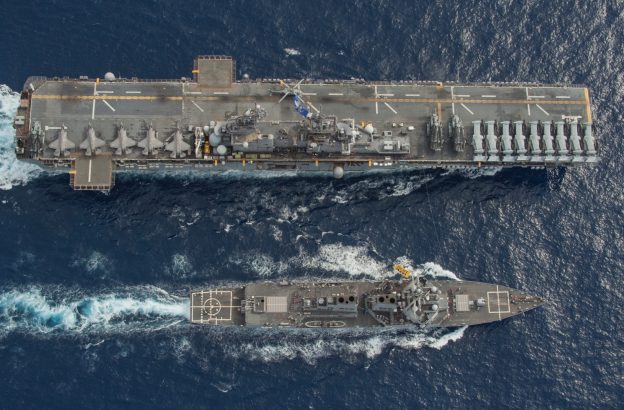 USS Ronald Reagan (CVN-76) is in port in Yokosuka, Japan, for a maintenance availability.

Destroyers USS Sterett (DDG-104) and USS Dewey (DDG-105) are on a scheduled deployment to conduct operations in the Indo-Pacific region. While deployed, they will also support the Wasp Expeditionary Strike Group (ESG) in order to advance U.S. Pacific Fleet’s Up-Gunned ESG concept and will train with forward-deployed amphibious ships across all mission areas. Dewey has been operating with Wasp recently while Sterett has conducted other tasks in U.S. 7th Fleet. 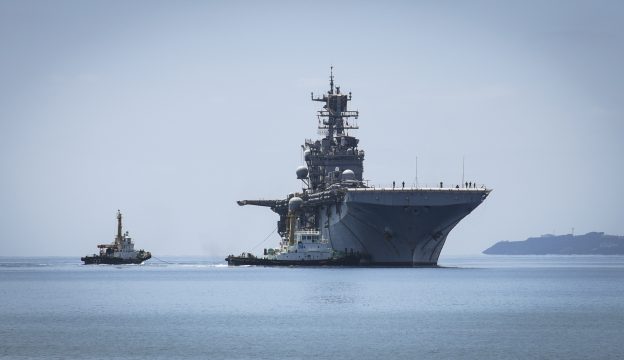 “The amphibious assault ship USS Bonhomme Richard (LHD-6) arrived at White Beach, Okinawa, on April 9, the ship’s final time there as it prepares to sail to San Diego for a homeport shift. Forward-deployed since 2012, Bonhomme Richard has frequently stopped in White Beach to either on-load or drop off Marines, most often those from 31st Marine Expeditionary Unit but also units under 3rd Marine Division and 3d Marine Expeditionary Brigade,” reads a statement from the Navy.
“As a tribute to the continual support the Okinawa community has provided to Bonhomme Richard over the years, the ship will host members of the community for ship tours and interact with thousands of citizens planned to attend the White Beach Festival taking place April 14-15.”

According to the 7th Fleet commander, “Service members and partner nation personnel participating in Pacific Partnership 2018 (PP18) aboard Military Sealift Command hospital ship USNS Mercy (T-AH-19), arrived in Changi, Singapore, on April 13 for a port call. During the visit, the crew will conduct routine maintenance, load additional supplies onto the ship, and prepare for the second mission stop in Port Kelang, Malaysia.” 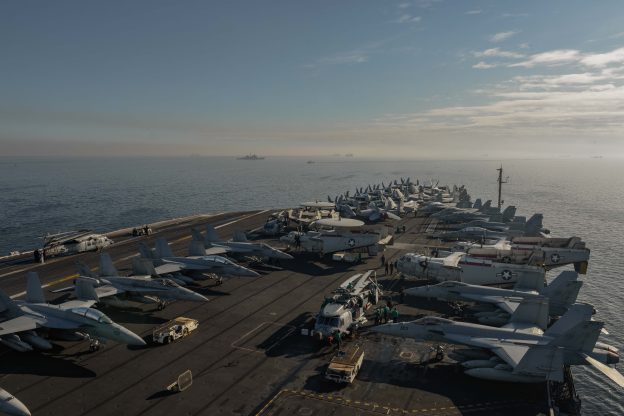 USS Theodore Roosevelt (CVN-71) anchors off the coast of Manila, Republic of the Philippines, for a scheduled port visit on April 11, 2018. US Navy Photo 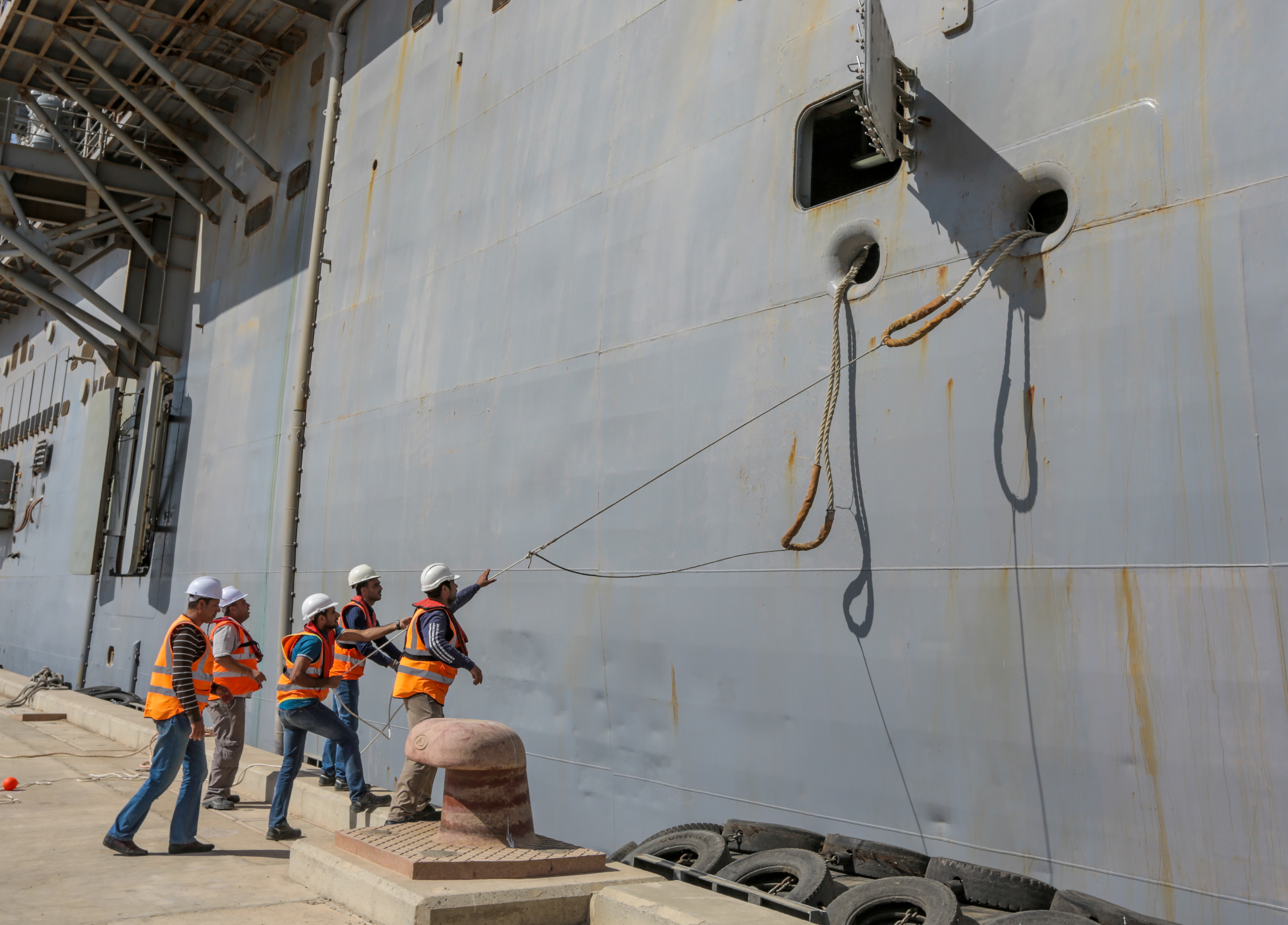 The 11-day event will test the team’s 1,500 sailors and 1,800 embarked Marines with a wide range of drills meant to improve their collective ability to plan and project presence in a coalition environment. Eager Lion focuses on increasing U.S.-Jordanian security and warfighting capabilities, allowing the two nations to better address common threats to regional security. As part of the exercise, Marines from the 26th MEU will take part in an embassy reinforcement and non-combatant evacuation operation, and conduct bilateral sustainment training in a variety of combat skillsets.” 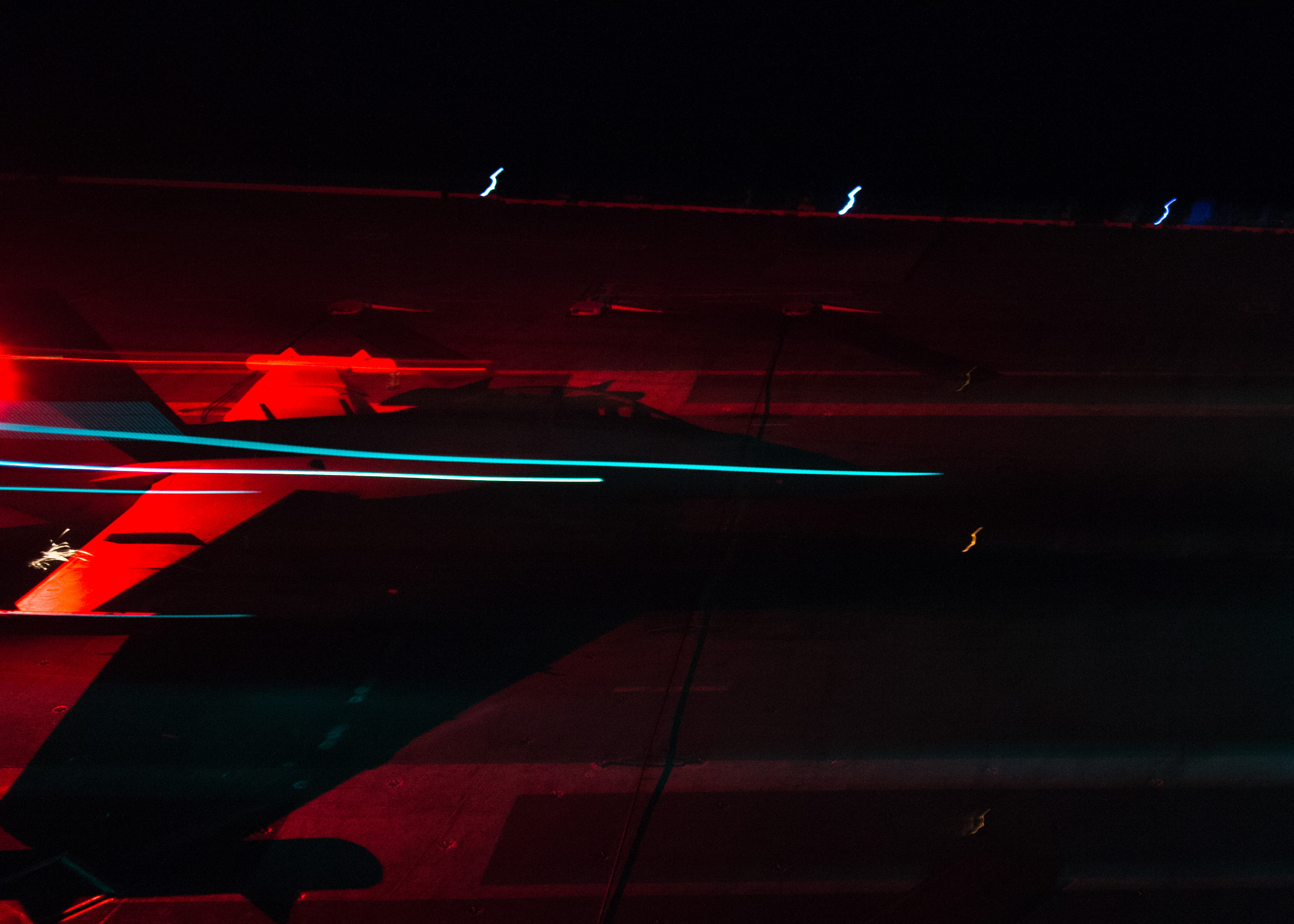 An EA-18G Growler assigned to the Wizards of Electronic Attack Squadron (VAQ) 133 lands on the flight deck of the aircraft carrier USS John C. Stennis (CVN-74) on April 6, 2018. US Navy Photo

According to the Navy, “USS John C. Stennis (CVN-74) is underway with Carrier Air Wing 9 (CVW-9) to conduct training to prepare for its next scheduled deployment. Over the next several weeks, John C. Stennis will complete Tailored Ship’s Training Availability and Final Evaluation Problem (TSTA/FEP), which assesses the ship’s ability to operate safely across a range of mission areas. Planned training includes flight operations, seamanship training, and exercises designed to maintain technical and tactical proficiency in a variety of warfare areas as the ship and CVW 9 operate together for the first time since August 2016.” 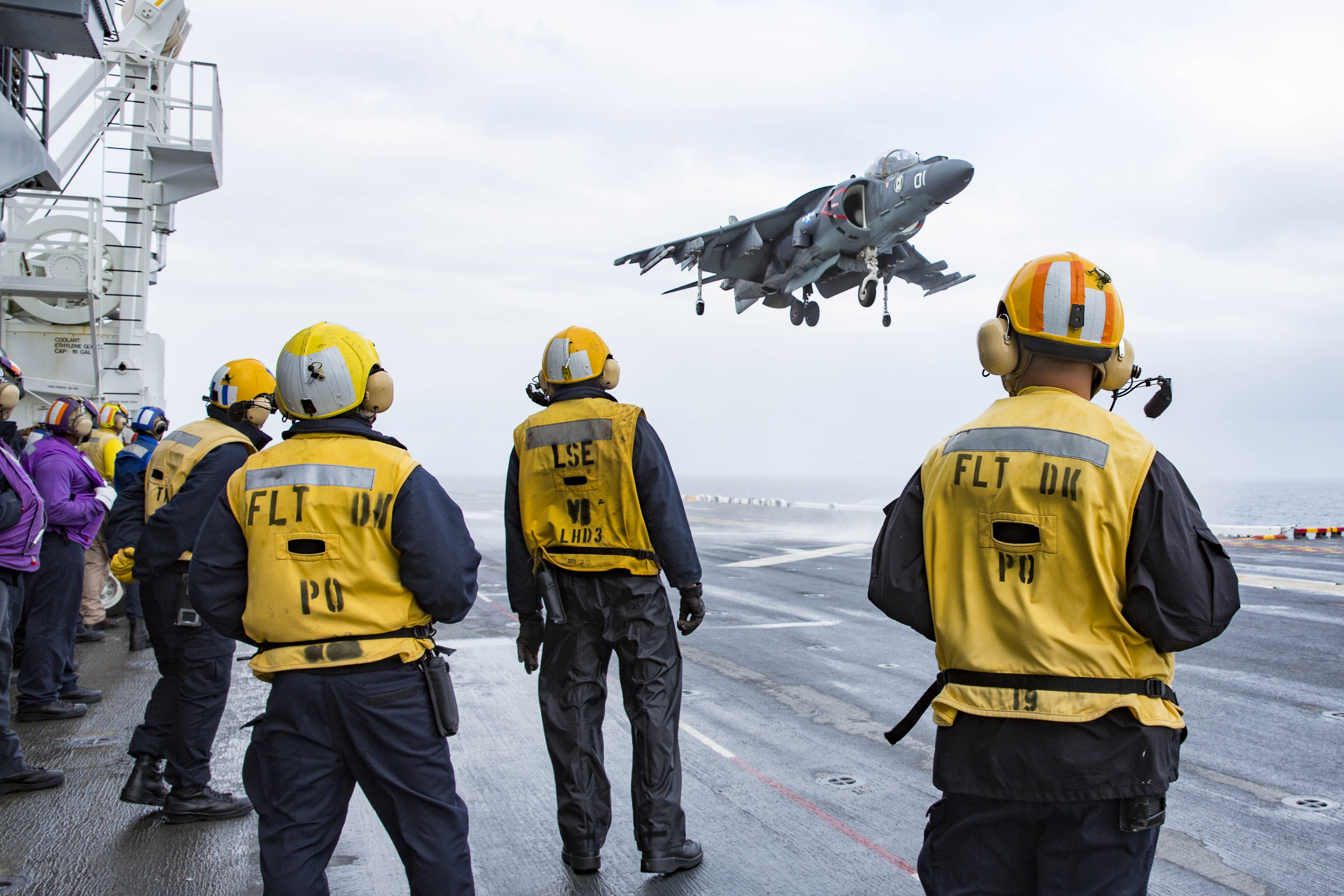