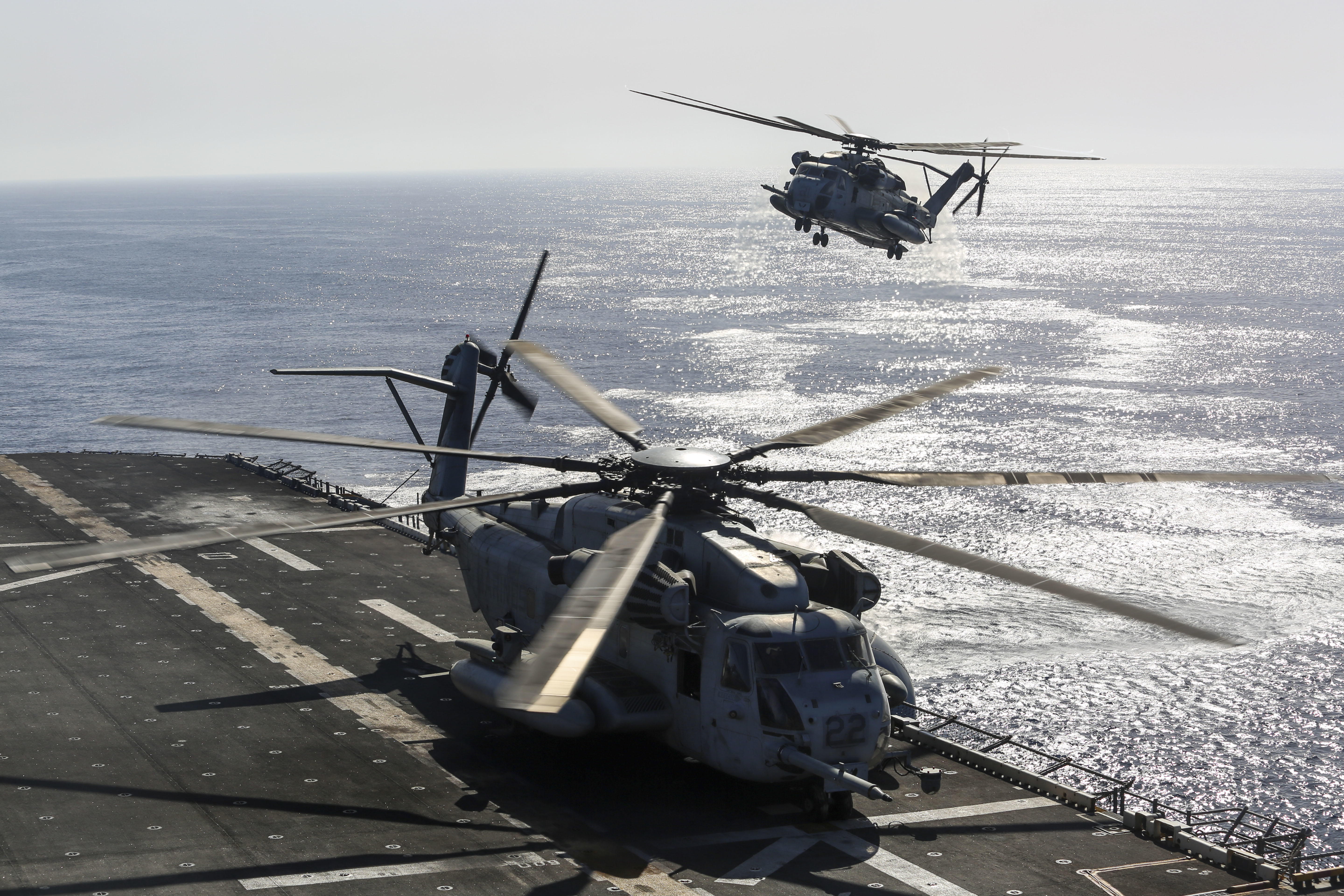 All U.S. military air operations in Djibouti are on hold and an exercise taking place in and around Djibouti has been canceled following two aviation mishaps on Tuesday.

An AV-8B Harrier and a CH-53E Super Stallion helicopter, both from the 26th Marine Expeditionary Unit, crashed in the country on April 3 as exercise Alligator Dagger was getting started.

26th MEU initially called a 24-hour operational pause for flight operations after the Harrier crash, though the rest of the exercise was meant to continue and the pause only applied to the MEU’s air combat element. But today, U.S. Naval Forces Central Command announced all air operations in the country would be paused and the remainder of the exercise canceled – though NAVCENT made clear that other activities such as maritime security operations in the region would continue.

NAVCENT spokesman Cmdr. Bill Urban told USNI News that “the Navy and Marine Corps have safety procedures in place during exercises and operations to prevent injuries or mishaps related to our operations. We are taking an operational pause for exercise participants to reinforce those procedures and review our operations. This safety stand down is for the Iwo Jima Amphibious Ready Group and the 26th Marine Expeditionary Units and any other associated Alligator Dagger participants.

“Routine operations for other units assigned to U.S. Naval Forces Central Command are unaffected by this safety stand-down, and U.S. naval personnel continue to conduct maritime security operations throughout the region,” Urban added.

Two nonfatal crashes occurred on Tuesday in Djibouti, though only one was previously widely reported. An AV-8B Harrier crashed while taking off from the Djibouti Ambouli International Airport around 4:10 p.m. local time (9 a.m. EST). According to witness accounts, the nose of the aircraft rose too quickly, causing the pilot to lose control. The pilot ejected from the plane and was able to walk to an ambulance afterwards.

The Marine Corps and Defense Department had not publicly announced the helicopter crash, but in today’s NAVCENT statement spokeswoman Lt. Christina Gibson said that “In a separate incident, a Marine CH-53 Super Stallion helicopter from the 26th MEU suffered structural damage during a landing at an approved exercise landing zone at Arta Beach, Djibouti, at approximately 6:40 p.m. local time. The aircrew were not injured during the landing and the helicopter has remained at the landing site pending additional assessment.”

CNN reported on the helicopter crash in a report this morning about a recent spike in aviation crashes, several of which have been fatal, across the joint force in recent weeks. 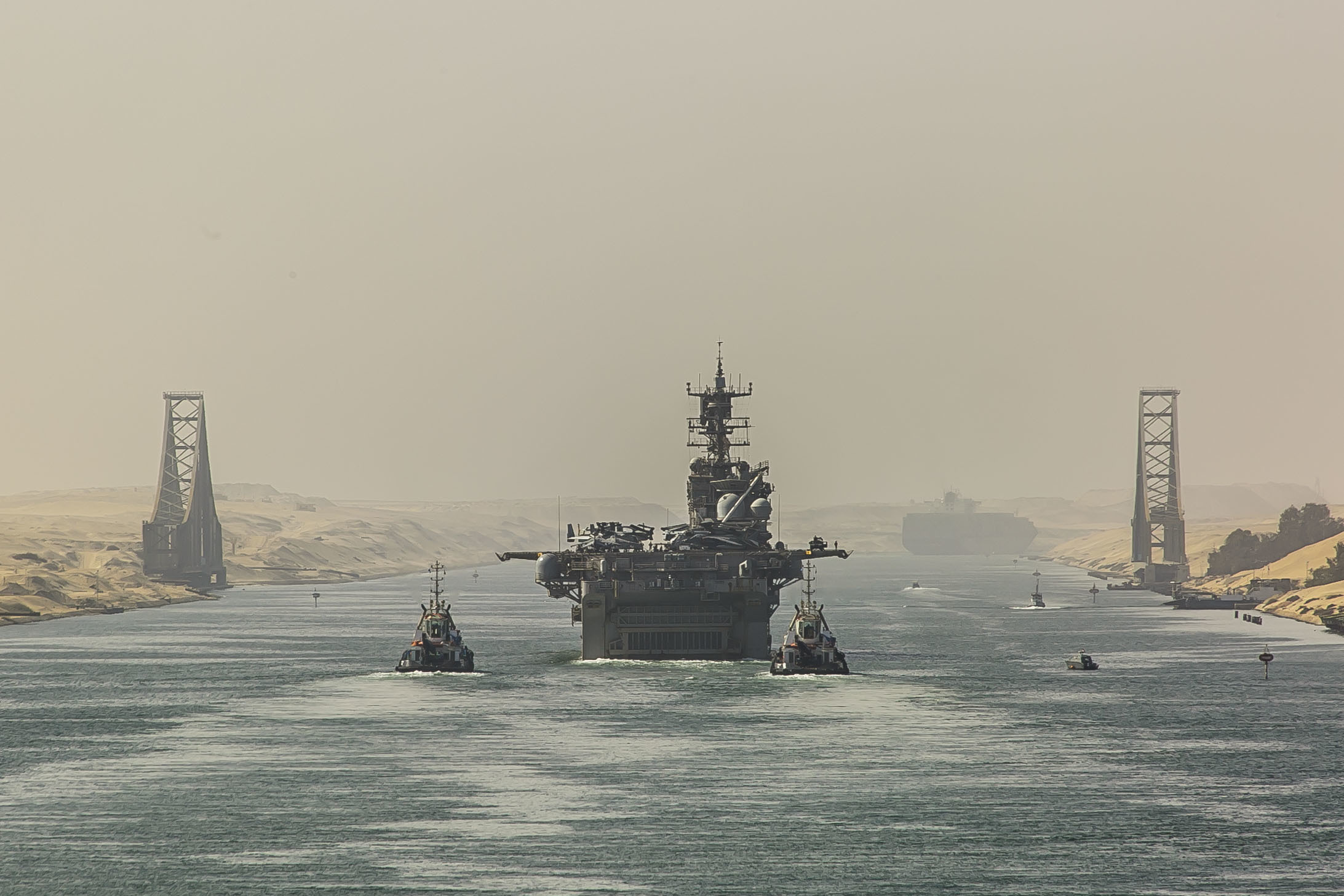 The Wasp-class amphibious assault ship USS Iwo Jima (LHD 7) transits through the Suez Canal on March 27, 2018. The Iwo Jima is deployed to the U.S. 5th Fleet area of operations in support of maritime security operations to reassure allies and partners and preserve the freedom of navigation and the free flow of commerce in the region. US Marine Corps photo.

Unrelated to the incidents in Djibouti, a Marine CH-53E crashed in California on Tuesday, killing the four Marines onboard. The crash – the third Marine aviation crash on Tuesday – took place near El Centro, along the border with Mexico, during what the Marine Corps described as a training mission for “aircraft landings in unimproved zones,” according to a statement from 3rd Marine Aircraft Wing.

USNI News contacted Marine Corps headquarters to see if the service itself was taking any action in light of the three mishaps in a single day this week, but the public affairs staff told USNI News that the service was not planning any widespread safety standdowns at this time due to the mishaps spanning multiple aircraft type and multiple locations, with no clear common factors.

U.S. air operations in Djibouti are on hold and U.S. Naval Forces Central Command has cancelled the remainder of exercise Alligator Dagger in response to two separate aviation incidents in Djibouti on April 3, 2018.

First, an AV-8B Harrier from the 26th Marine Expeditionary Unit (MEU) crashed at Djibouti Ambouli International Airport at approximately 4:10 p.m. local time. The pilot ejected and was evaluated and released by the expeditionary medical facility at Camp Lemonnier.

In a separate incident, a Marine CH-53 Super Stallion helicopter from the 26th MEU suffered structural damage during a landing at an approved exercise landing zone at Arta Beach, Djibouti, at approximately 6:40 p.m. local time. The aircrew were not injured during the landing and the helicopter has remained at the landing site pending additional assessment.

Alligator Dagger is a routine, scheduled training event involving U.S. personnel and operations in the vicinity of Djibouti and Arta Beach Range. Both incidents are currently under a joint investigation, and we will provide more information when able. A safety stand-down has been initiated for all exercise participants.

Routine operations for other units assigned to U.S. Naval Forces Central Command are unaffected by this cancellation, and U.S. Naval personnel continue to conduct maritime security operations throughout the region.