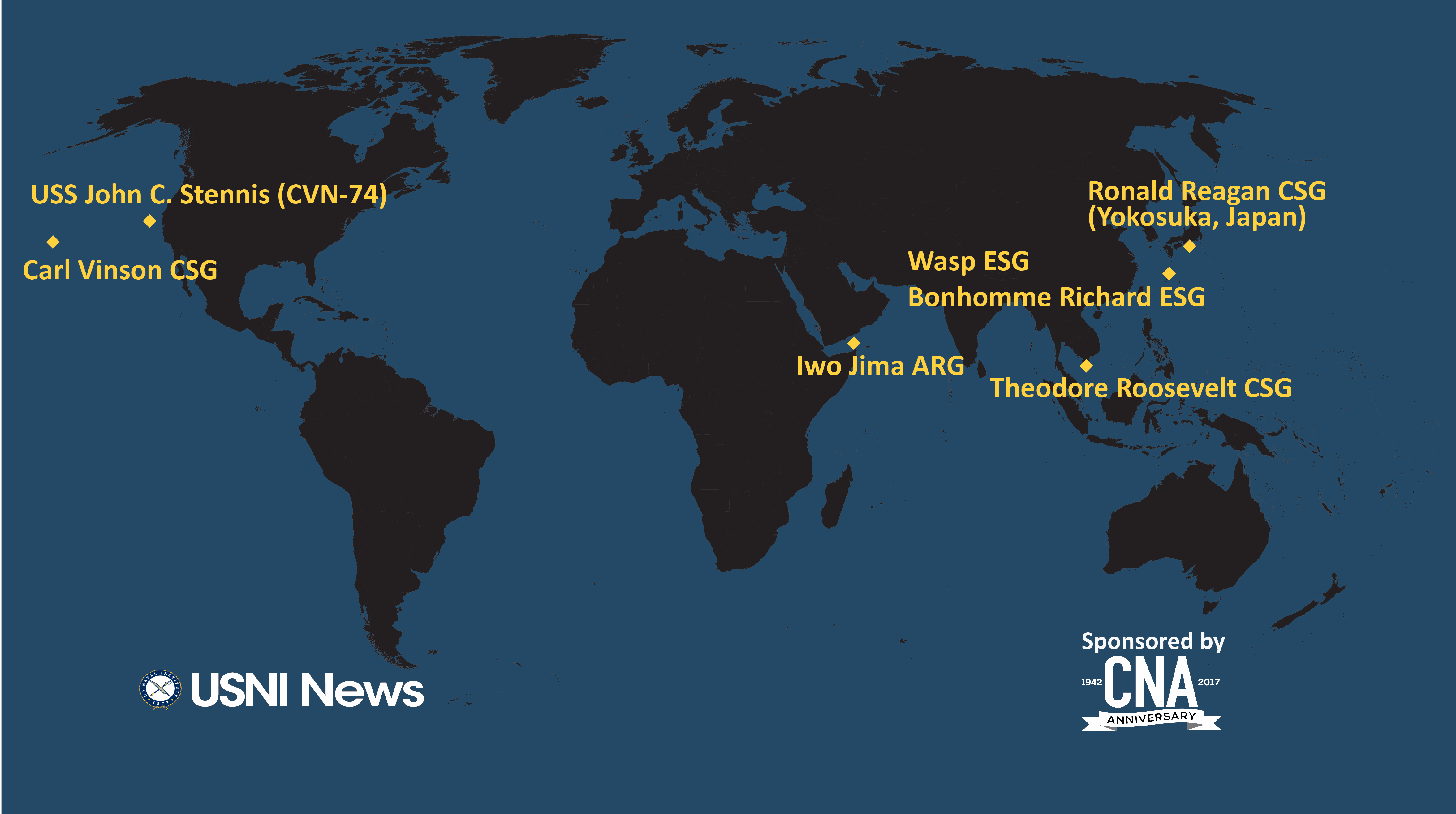 The USNI News Fleet and Marine Tracker is sponsored by CNA. These are the approximate positions of the U.S. Navy’s deployed carrier strike groups and amphibious ready groups throughout the world as of April 9, 2018, based on Navy and public data. In cases where a CSG or ARG is conducting disaggregated operations, the map reflects the location of the capital ship. 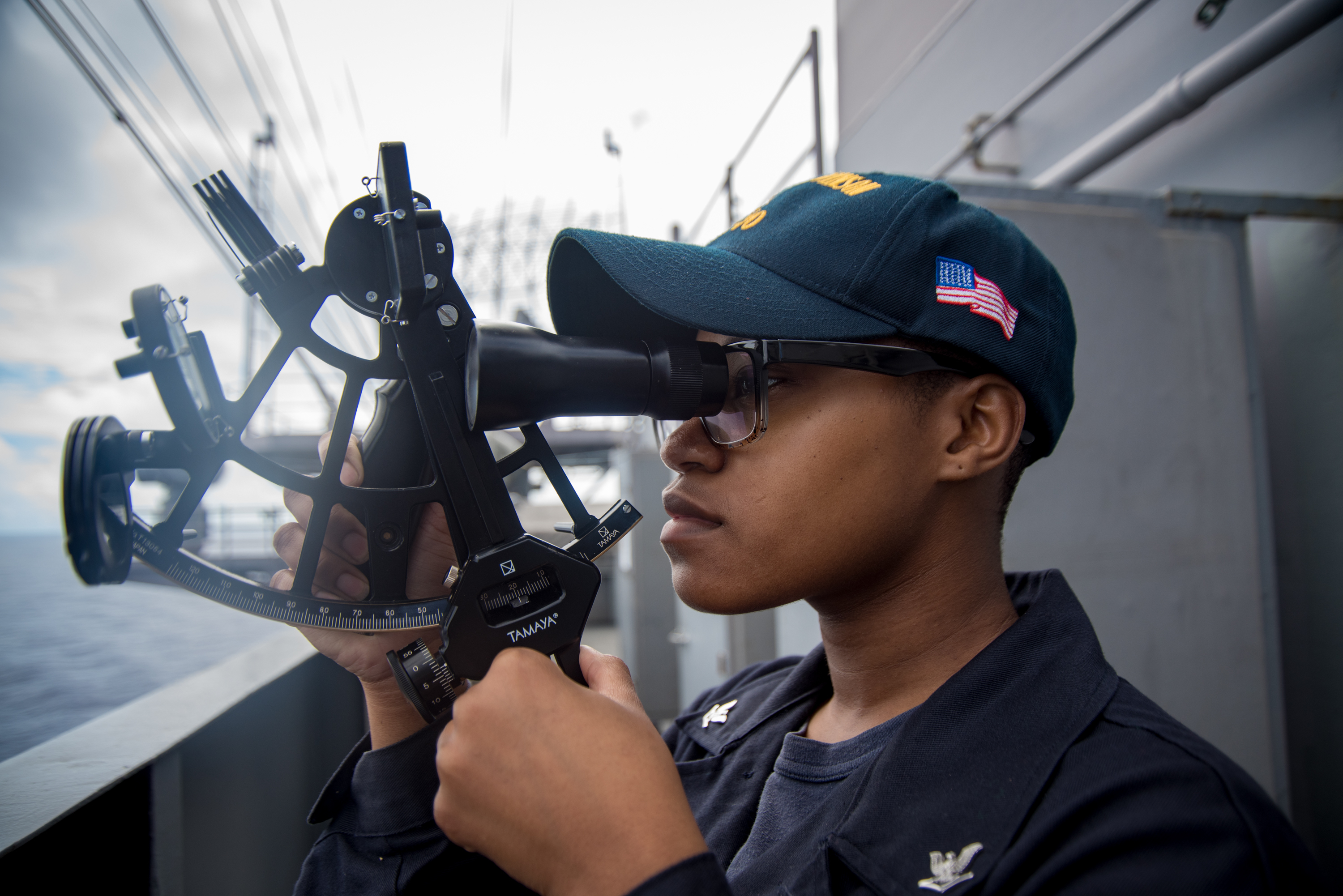 The Carl Vinson Carrier Strike Group is headed for home after completing its second deployment in as many years to the Western Pacific. The CSG has chopped into the U.S. 3rd Fleet area of responsibility.

USS Carl Vinson (CVN-70) was in the Western Pacific at a time the Navy’s only permanently forward-deployed aircraft carrier is moored in its homeport of Yokosuka, Japan, for a planned maintenance period that Navy officials say is expected to last a couple of months.

An F/A-18E Super Hornet assigned to the Kestrels of Strike Fighter Squadron (VFA) 137 makes an arrested landing on the flight deck of the Nimitz-class aircraft carrier USS Carl Vinson (CVN-70) on April 4, 2018. US Navy Photo

CVW 2 is embarked aboard Carl Vinson and includes nine squadrons and detachments:

Destroyer Squadron 1
The leadership of DESRON 1 is embarked aboard Carl Vinson and commands the CSG’s guided-missile destroyers.

The Los Angeles-class fast-attack submarine USS Bremerton (SSN -98) returned from deployment on April 6 to its homeport of Pearl Harbor, Hawaii. Bremerton completed a six-month deployment while conducting operations in support of national security. 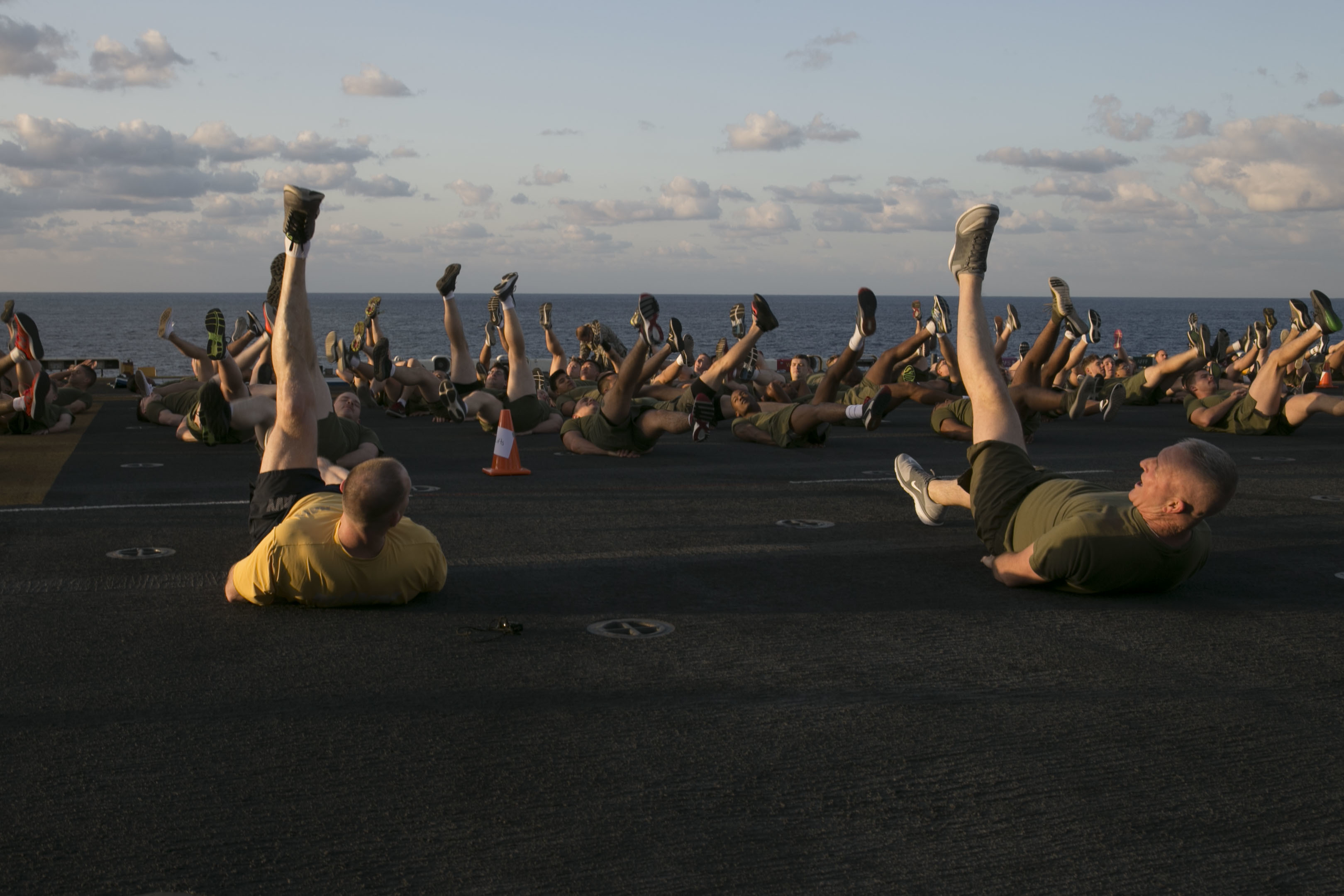 Sailors and Marines with the Wasp Amphibious Ready Group do flutter kicks on the flight deck of the USS Wasp (LHD-1). US Marine Corps Photo

USS Ronald Reagan (CVN-76) is in port in Yokosuka, Japan, for a selected restricted availability that began in January.

USS Sterett (DDG-104) and USS Dewey (DDG-105) are on a scheduled deployment to conduct operations in the Indo-Pacific region. They will also support the Wasp Expeditionary Strike Group (ESG) in order to advance U.S. Pacific Fleet’s Up-Gunned ESG concept and will train with forward-deployed amphibious ships across all mission areas. 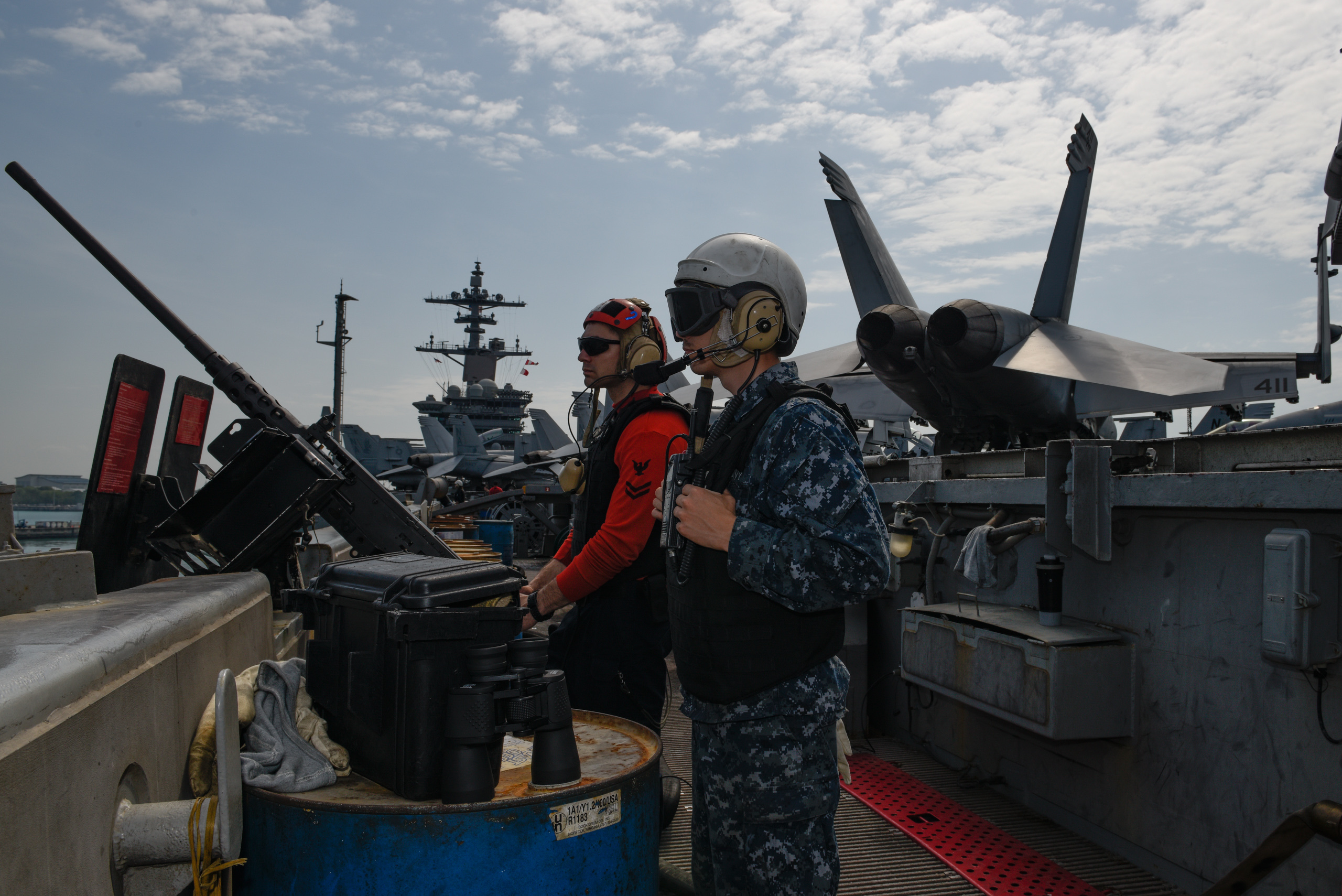 The Theodore Roosevelt Carrier Strike Group (CSG) transited the Strait of Malacca on April 1 and visited Singapore from April 2 through 6. The CSG is now in the South China Sea where it has been conducting operations with the Republic of Singapore Navy. 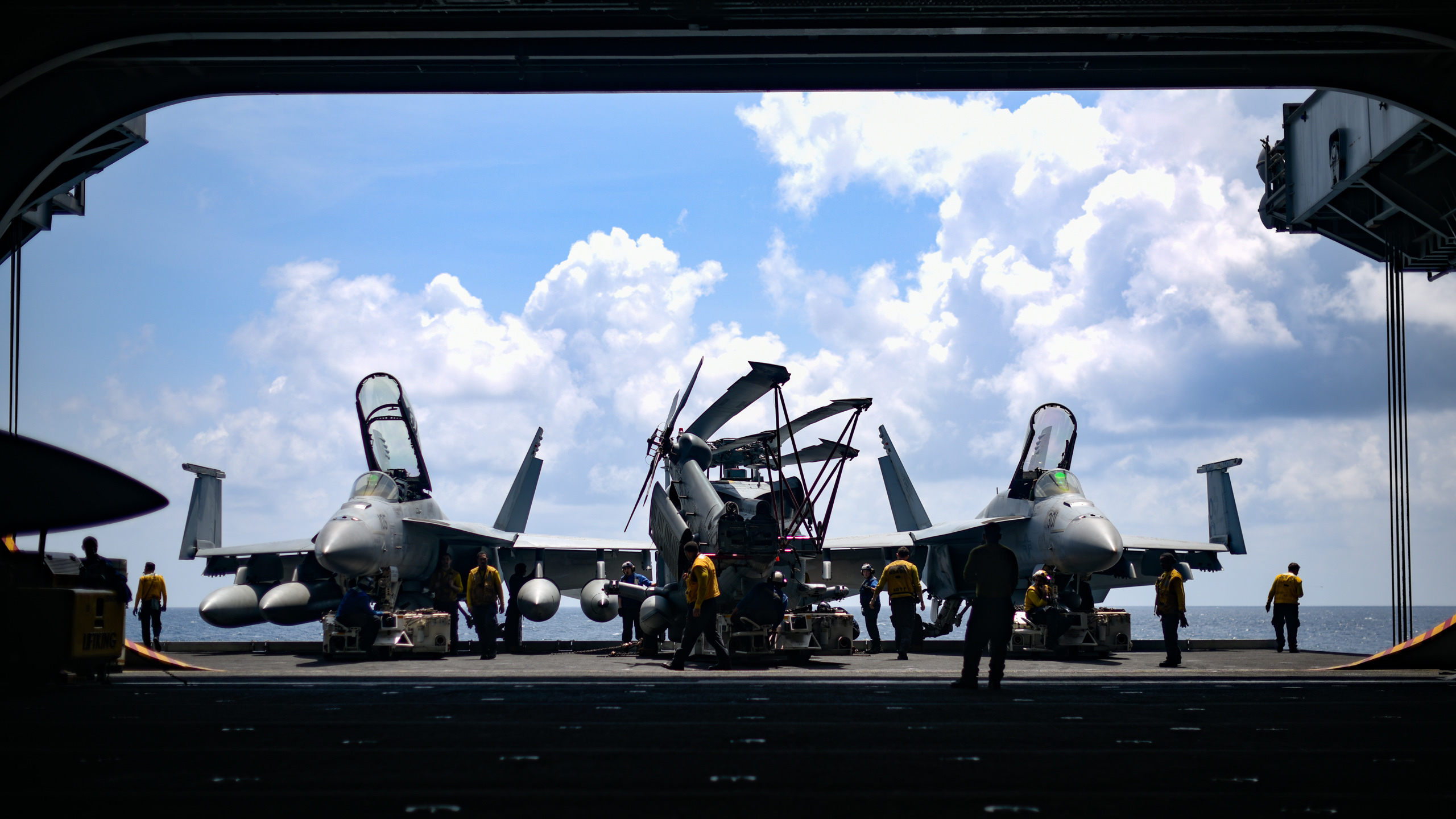 Sailors move aircraft from an elevator into the hangar bay of the aircraft carrier USS Theodore Roosevelt (CVN-71) on April 8, 2018. US Navy Photo 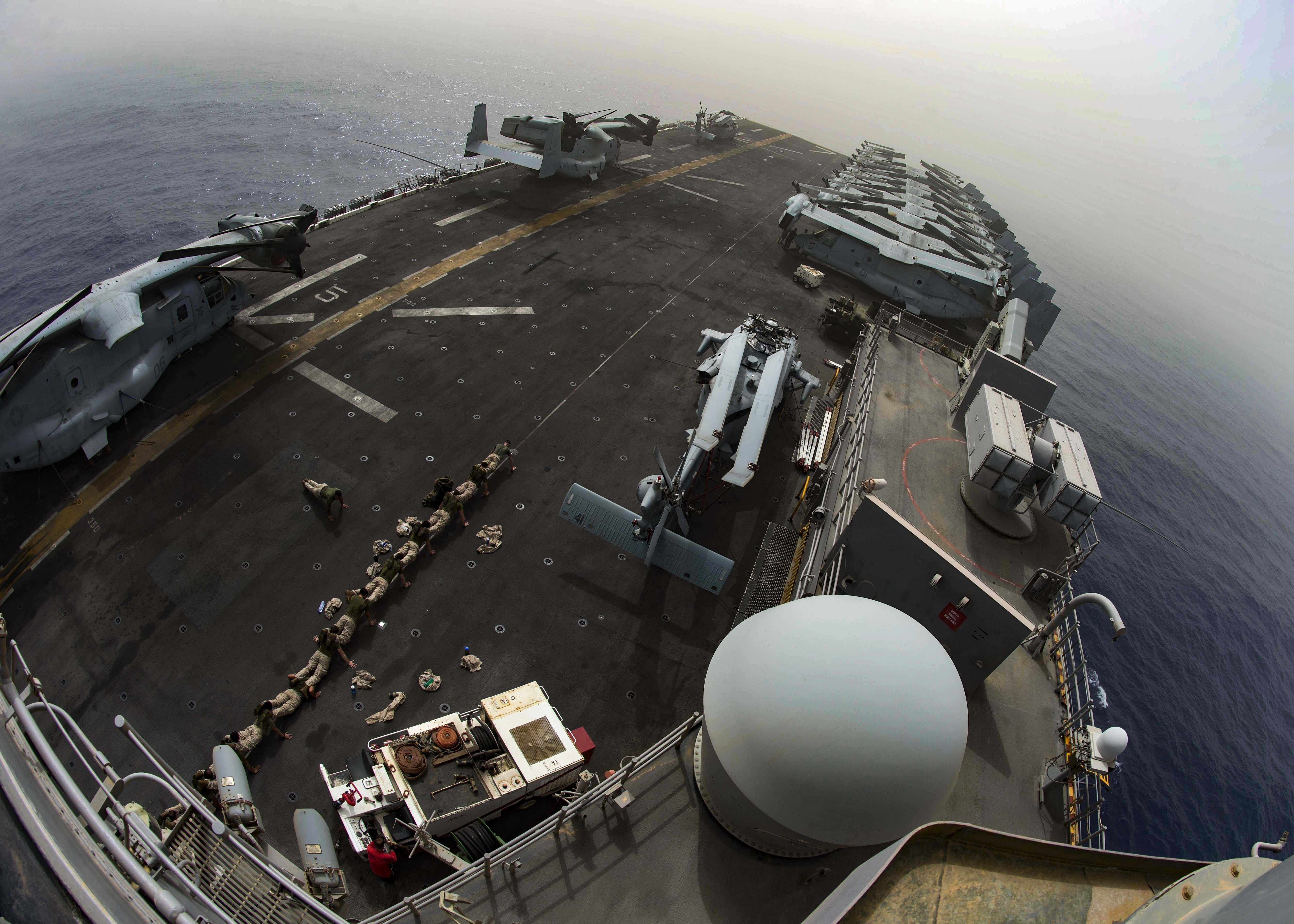 Marines attached to the 26th Marine Expeditionary Unit exercise on the flight deck as the Wasp-class amphibious assault ship USS Iwo Jima (LHD 7) passes through a sandstorm on March 29, 2018. US Navy Photo

USS Iwo Jima (LHD-7) ARG transited the Suez Canal March 27 and entered the 5th Fleet area of responsibility. An AV-8B Harrier and a CH-53E Super Stallion helicopter, both from the 26th MEU, crashed in the Djibouti on April 3 as exercise Alligator Dagger was getting started. The exercise was cancelled after these two mishaps. 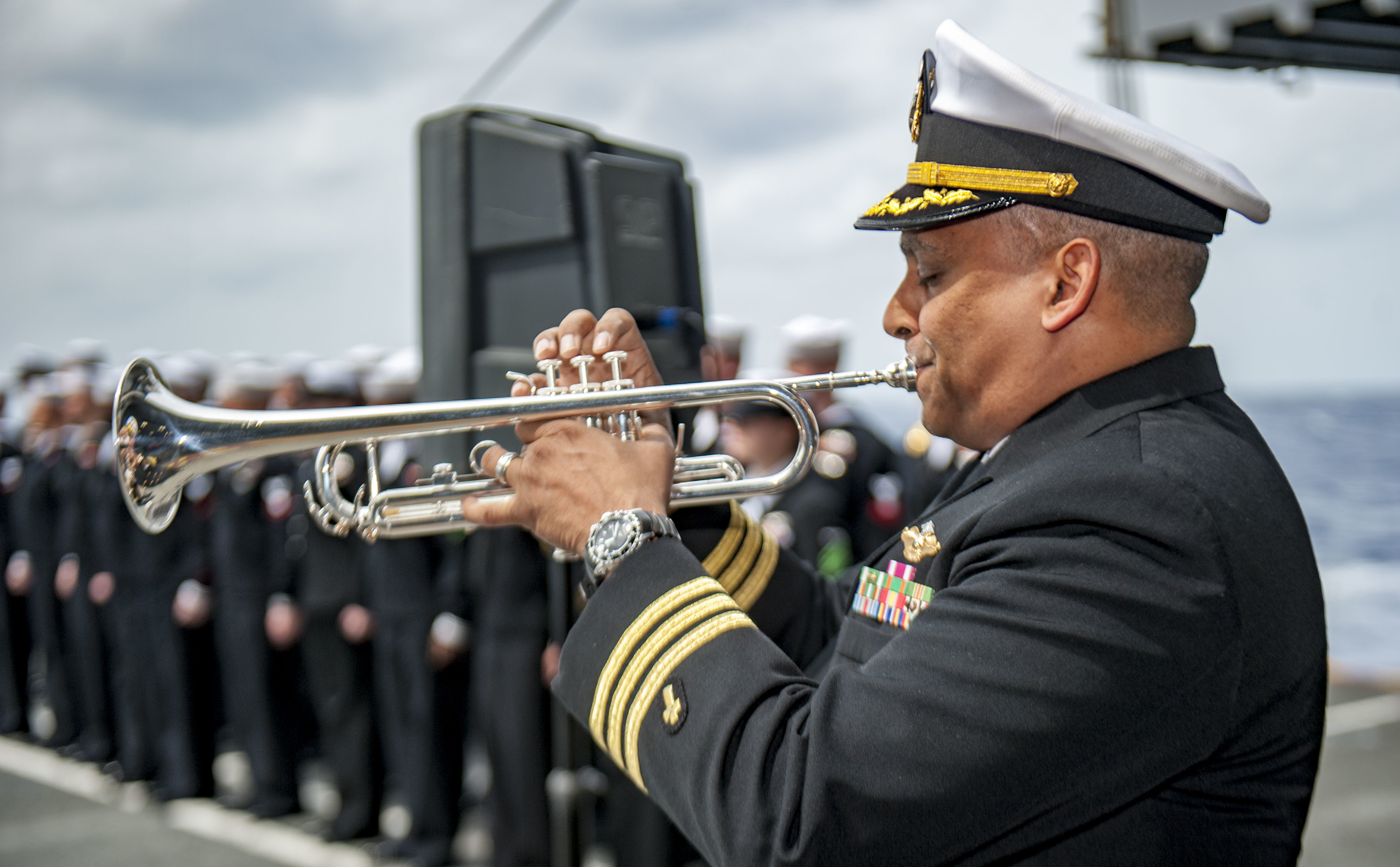 USS George H. W. Bush (CVN-77) is in port after completing a phase of at-sea training with a French Navy aviation detachment that will deploy with the strike group later this year.

The French AIRDET is composed of 350 sailors, 12 Rafale fighter aircraft and one E-2C Hawkeye. The element will deploy for eight weeks to Naval Air Station (NAS) Oceana and NAS Chambers Field starting on April 4.

“The Rafales belong to squadrons 11F, 12F, and 17F based at NAS Landivisiau, in Brittany, France, and the Hawkeye hails from squadron 4F based in NAS Lann-Bihoué, also in Brittany. While operating in the United States, these aircraft, their aircrew, and their ground crew will be integrated in the U.S. Navy’s Carrier Air Wing Eight (CVW 8),” read a piece in U.S. Naval Institute’s Proceedings. 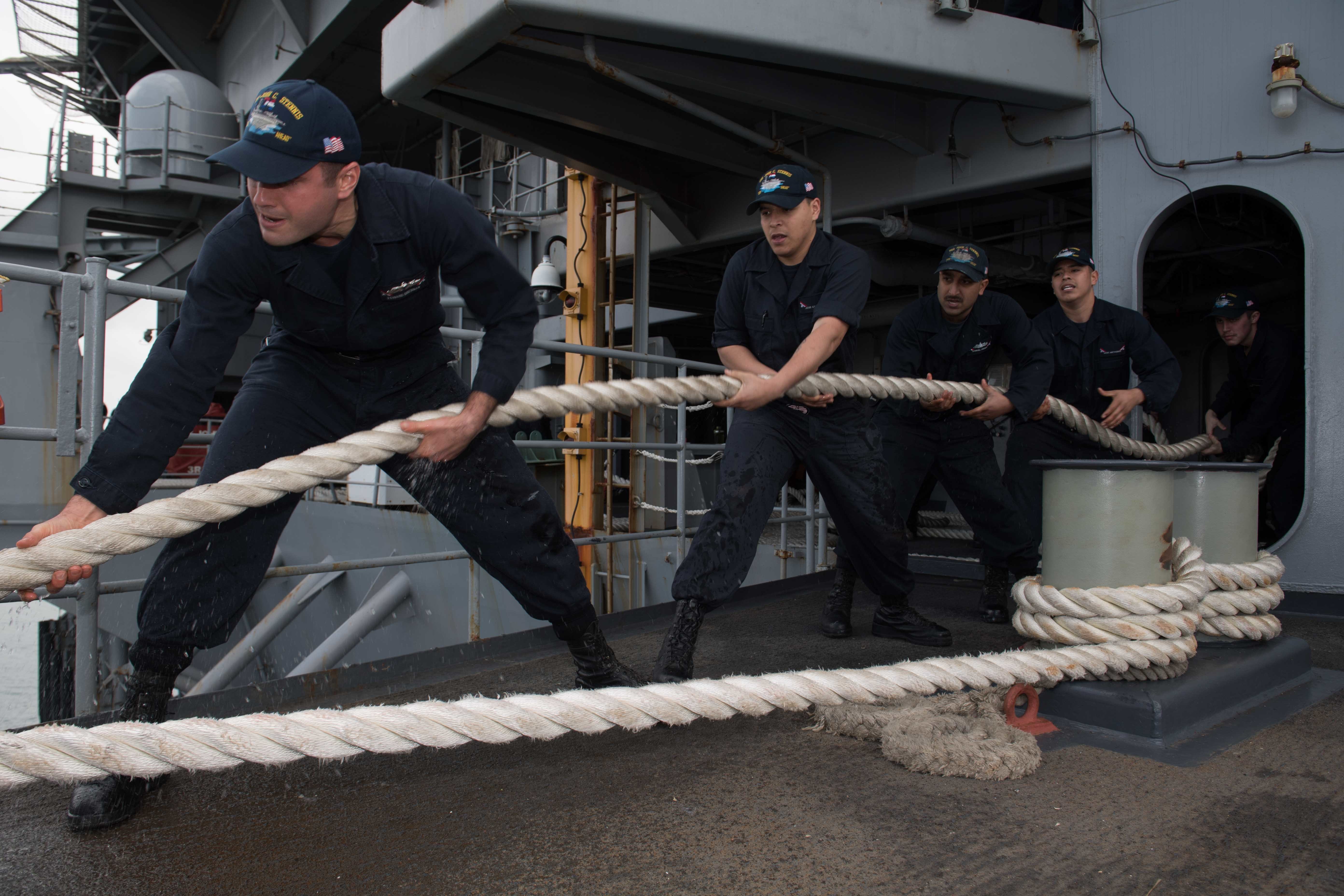 USS John C. Stennis (CVN-74) left Naval Air Station North Island on April 3 and is underway with CVW 9 to conduct training to prepare for its next scheduled deployment.

“Planned training includes flight operations, seamanship training, and exercises designed to maintain technical and tactical proficiency in a variety of warfare areas as the ship and CVW 9 operate together for the first time since August 2016,” read a statement from the Navy.

Last week, USS Essex (LHD-2) was underway in the Southern California Operating Areas conducting an Amphibious Squadron (PHIBRON) and MEU Integration (PMINT) exercise. PMINT is a two-week training evolution between Essex Amphibious Ready Group and 13th MEU, which allows sailors and Marines to train as a cohesive unit in preparation for their upcoming deployment. That is now completed.