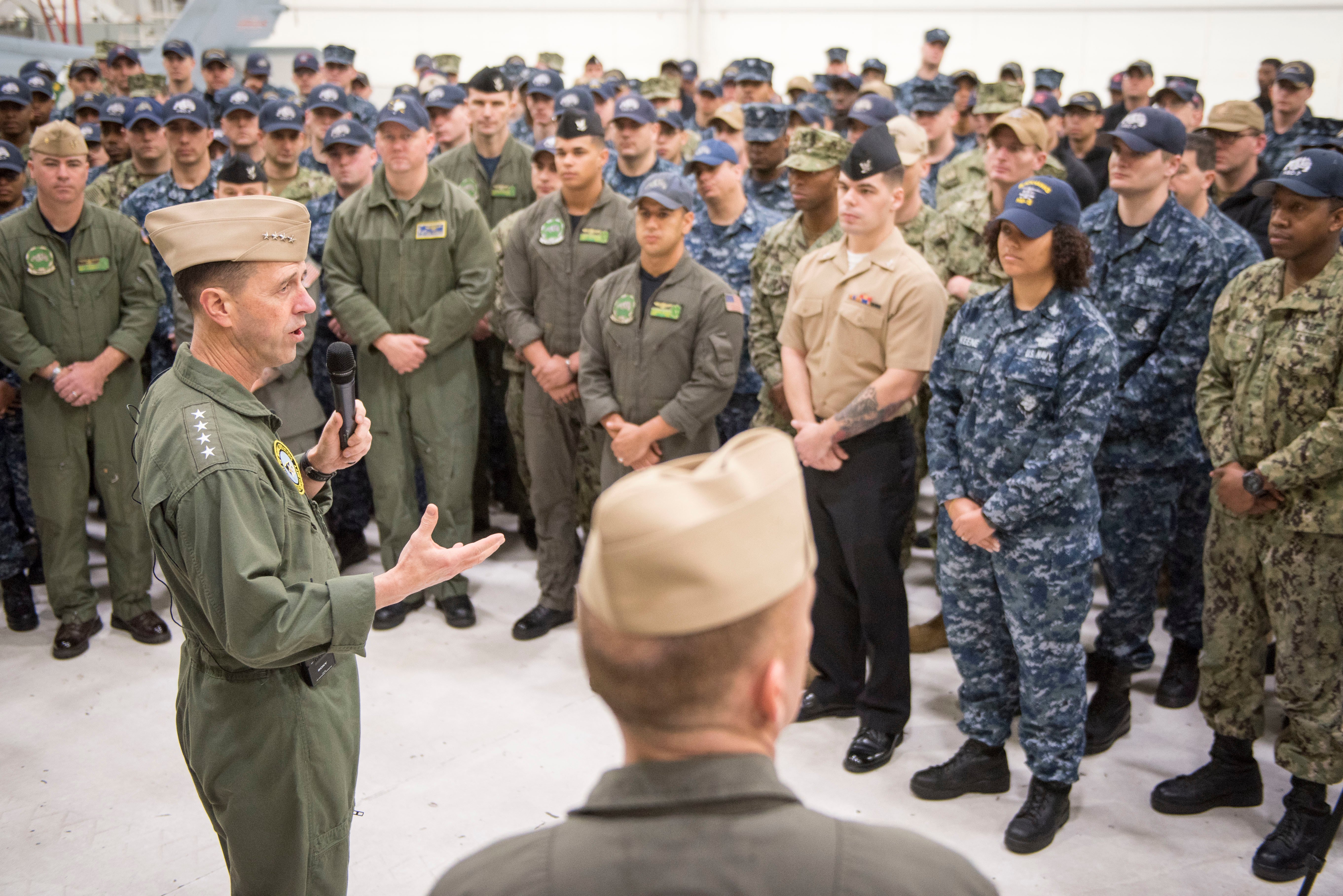 NEWPORT, R.I. – As the Navy prepares for great power competition on the seas, it will rely more than ever on capable leaders that command trust up and down the chain of command and can win with or without being networked in with the rest of the fleet, Chief of Naval Operations Adm. John Richardson told USNI News.

With the operational imperative for strong leadership in mind, Richardson released an updated version of his Navy Leader Development Framework and was on hand to announce the formation of the College of Leadership and Ethics at the Naval War College here on Friday.

Richardson told USNI News during a Friday visit to the Naval War College that a new great power competition will require the Navy to have leaders that can win every battle. When technology is available to them, they must exploit unmanned systems and big data better than the competition to win, and when they are denied the use of that technology they must still win through the basics of sea control and an understanding of commander’s intent.

“If we think about this Navy the nation needs we’ve been talking about … there’s this networked idea. The theory behind the network is that you’re really going to make information available; more information available to more people. I think at the end of the day, the team that has the most information available to the most people wins; they have an advantage – but that network is going to be the first point of attack if we get into a conflict,” he said.
“And so there’s this balance that has to be struck between a leader that is tied into the network and has all this information available to them, including access to their boss and all that other stuff, and you have to balance that with the fact that something that is really fundamental to naval leadership is this idea of operating under commander’s intent. Here’s what I need you to go do in pretty general terms, here’s the boundaries that I’ve given you; go and use your own initiative and exploit everything inside those boundaries, and do good. … So we’ve got to preserve both: we’ve got to be better networked; as the network decays we’ve got to be better at operating under commander’s intent; and then the network has to heal faster than the adversary’s.”

Richardson said the Navy already does a good job building its leaders from a technical competence standpoint – the ability to run a department on a ship, command an air wing, plan a mission, and so on – but more work is needed on the character development half of leadership training. The CNO said a prospective leader needs to earn trust and confidence from his or her superiors before being delegated responsibility, and that trust and confidence must be based equally on competence and character.

To that end, the CNO said several changes are coming to the Navy to help boost leadership development.

“We’re in the final stages of a revision to our FITREPS (officer fitness reports) system, our evaluation system. So in an ideal closed-loop environment you would say at the beginning, this is what we value, this is what we think is important. We’re going to teach you those things [through schools, on-the-job training and self-learning]. So that’s how we move you along this road in competence and character. Now to close the loop we have to assess you, and ideally your exam would be on the things we told you upfront and educated you that are important,” he explained.
“So in this FITREP system we’re going to focus on exactly that: we’re going to have some formal assessment of character. … The first target of those is the individual; so sometimes the primary audience of those assessments is the promotion boards and that sort of thing. We’re going to re-target the audience as being the individual, so it’s a feedback loop to the person who can improve. And it will enable those conversations: here’s your competence, here’s where you can do better there, but let me tell you about this other part of your leadership, and it will deliberately drive those conversations about character.”

Richardson said the changes to the FITREP will also allow for a leader to request anonymous feedback from his or her team to understand how effective his or her leadership is and learn how to improve.

The Navy has not yet announced a timeline for these changes, but Richardson said discussions are ongoing to develop and implement the new FITREPS that balance technical competence and strength of character.

Richardson said he has cared about and pushed for leadership development for years now, dating back to his time as commander of Submarine Forces. But he said tangible steps – the new FITREPS and the standup of the College of Leadership and Ethics among them – are vital.

“It’s easy to say, hey, leadership matters, leadership is important. But unless you’re putting [resources] into programs to develop it, assess it and hold people accountable for it, it’s all kind of talk,” the admiral said.

Though news headlines – including last year’s fatal surface ship collisions and the ongoing Fat Leonard investigation fallout – did not spark his emphasis on leadership and ethics, Richardson said they do provide concrete examples for why leadership and ethics are so important.

“When you think about where our commanding officers and leaders fall short, there’s just been too many instances where those shortcomings have had to do with ethical types of issues, in addition to the competence thing. So it’s clearly an area where we needed to make sure we were emphasizing,” he said.
“Perhaps the ultimate expression of trust and confidence is to give that commanding officer that ship and that crew and expect them to go over the horizon on their own and come back stronger than when they left in every respect, both from a warfighting competence standpoint but also I want them to bring our teams back stronger in character. And so there was certainly an element of the [post-collision] investigations that said, hey, we need to really make sure that in each of our communities – and this one focused on the surface community – that our careers, our education, our career path is really focused on developing competent, confident commanding officers with the competence of character.”

The College of Leadership and Ethics

Among the steps the Navy is taking to boost the importance of character development is the formal creation of a College of Leadership and Ethics at the Naval War College. Previously the Navy Leadership and Ethics Center, the college will now be staffed with seven military faculty to supplement the dozen civilian employees the center previously had. And as a college, the faculty and staff will have greater classroom time with the students and be fully integrated into the curriculum, Peg Klein, the college dean and a retired Navy rear admiral, told USNI News on Friday.

Klein said each school year includes a core class taught at the intermediate and senior level. The College of Leadership and Ethics will have 10 days of devoted classroom time in each core class, and the faculty and staff are still looking at how to make best use of that time with the students. The military faculty will also lead seminars that focus on leading yourself and self-awareness, leading others and your responsibility to subordinates, and military ethics, she said.

The college will also be involved in on-the-job training as it relates to leadership and ethics, though it’s still unclear what exactly that training will look like for sailors.

Klein said leadership and character development is harder to measure than technical proficiency, but she said she’s confident there will be a noticeable improvement in awareness of character and ethics in the coming years. She said she expects that sailors will have conversations with peers and with leaders about character and ethics, which creates a muscle memory for future behavior, according to scientific research she has studied.

Rear Adm. Jeff Harley, the president of the Naval War College, told USNI News on Friday that “it’s not enough to just say go have honor and courage and commitment; you have to provide the foundation of what those things mean.”

“In that new era of global competition, we realize there’s rapid change and complexity, so we have to increase our investment in leader development, particularly the idea of leadership and ethics, so we can improve our advantages over potential adversaries,” he added.

Richardson spoke Friday at the Naval War College to explain the role of the College of Leadership and Ethics and to explain the update to his Naval Leadership Development Framework, the initial version of which was released in January 2017.

The original document is maintained – with its three-pronged approach to development that includes schoolhouse education, on-the-job training and self-guided learning, its focus on the role of mentorship, and a leader development path for officers and enlisted sailors.

But the second iteration of the document adds three new ideas. First, Richardson said at the All Hands Call at the college, is an emphasis on diversity. He told the auditorium that everyone has blind spots born from “unconscious biases,” and that the more diverse a team, the more types of experiences and perspectives are included to help eliminate blind spots.

Every leader ought to look at his or her team and ask, “is this truly a diverse team, and am I bringing all of that diversity into my decision-making process, my solution-generation process” Richardson said.
“And the result will be much much richer, much more effective. They will be winning results; you will beat your competition because you will have fewer vulnerabilities in your plan that arise from these blind spots.”

Second, and related, Richardson said, is the idea of not just mentoring younger sailors but also becoming advocates – rather than simply teaching them, taking the extra step of nominating them for opportunities, recommending them to potential future bosses, and otherwise helping further their careers. But Richardson said leaders must be careful to have a diverse set of protégés, rather than ones that only resemble themselves, to avoid reverting the Navy back to the “old boys’ club” type of environment.

And lastly, the document highlights the importance of naval command. It includes a section entitled “The Charge of Command” that outlines the privilege, scope and responsibilities of command.