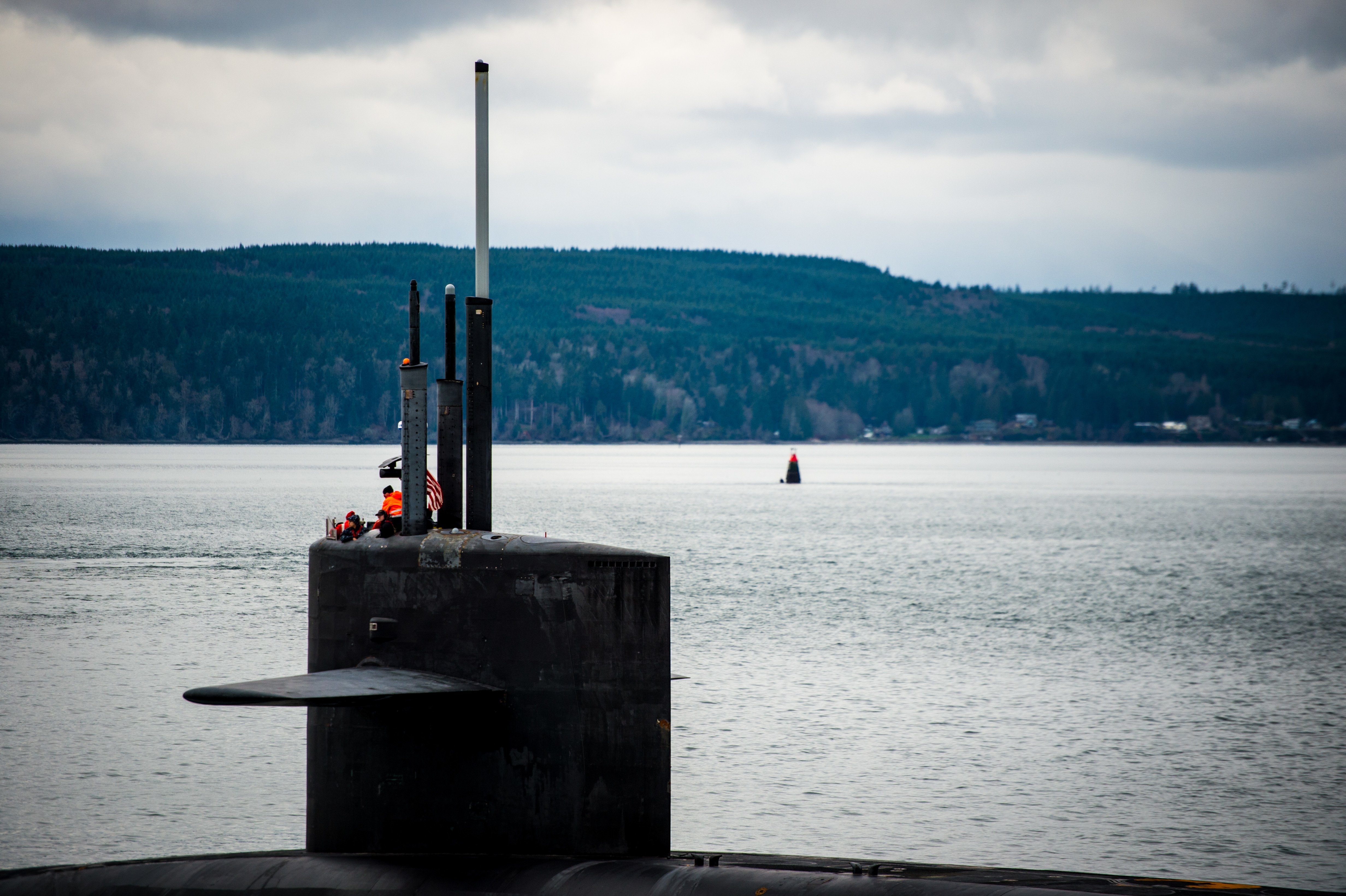 The crew of USS Kentucky (SSBN-737) transits the Hood Canal as the boat returns to its homeport at Naval Base Kitsap-Bangor, Wash., following a routine strategic deterrent patrol on Feb. 20, 2018. US Navy Photo

Last week before the Senate Armed Services strategic forces subcommittee, Navy nuclear programs director Adm. James Caldwell said “it required us to have another motor built” by the subcontractor. The overheating problem was traced to faulty insulation. The new motor has not yet been tested.

By overlapping some other testing in the program and other tweaks, the overall Columbia program is on schedule. “We’re managing it very tightly” to meet the 2021 date to begin construction, Caldwell said.

James Geurts, the assistant secretary for Research, Development and Acquisition, said at Tuesday’s hearing “early work on missile tubes” for the new submarine also was a factor in keeping to schedule. Also having 83 percent of the ship’s design done at this stage of production, versus 42 percent for Virginia-class at a comparable time helps the program’s on-time prospects.

Delivery for the first Columbia boomer is expected in 2031. The no-margin-for-error comes with that date because the first Ohio–class ballistic missile submarine is set to retire.

Caldwell termed the development of the life-of-the-ship nuclear core “a pretty big step for us” at the Senate hearing. Instead of coming in for refueling as nuclear-powered carriers do every 25 years, the core for Columbia class is to last the ship’s 40-plus-year service life. This longer core life is central to the Navy’s planning for 12 ballistic missile submarines instead of the 14 in the existing Ohio class.

Even with the Navy’s long history in nuclear propulsion, he told the panel that the longer life core “requires new materials,” which can present additional challenges. “We expect to start building the new core next year.” Caldwell added the longer life core would first be installed in future Virginia-class submarines.

Tuesday, Jabaley said the combined work on the quad-pack missile tubes and payload with the United Kingdom “is going very well.” The first five tubes have been delivered to the United States — four to Quonset Point, R.I., and one to Cape Canaveral, Florida.

He added the congressionally-approved continuous production authorities have been helpful aids in keeping the schedule intact. The Navy is looking to expand authorities into other areas, possibly the electric drive motor.

“It allows a more smooth ramp up” in building as repair work for other submarines decline, he said. That also helps Electric Boat maintain a steady skilled workforce over a long period of time. The authorities also “de-risk” the dangers of the early work problems surfacing in new class building, delaying the program and raising costs.

At the Senate panel last week, Lisa Gordon-Hagerty, recently confirmed as undersecretary for nuclear security at the Department of Energy, said the across-the-board nuclear weapons modernization programs has “everything is on track and on budget.” But she warned the panel that even with her program’s $15.1 billion budget request for Fiscal Year 2019, Congress “needs to sustain predictable funding” to deliver systems such as the replacement vessels for aging ballistic missile submarines.

In her opening statement, Gordon-Hagerty noted that $1.8 billion has been put against naval reactors in that request. “That’s a 20 percent increase” over last year’s and in line with Navy shipbuilding plans.

David Trimble, from the congressionally-established the General Accountability Office, agreed the longstanding challenge will be sustainability for all the nuclear programs — from ships to weapons. He also raised the affordability issue of bringing all the modernization programs into the services on schedule. He added a further problem may lay in having all this work done at the same time as the Department of Energy is overhauling existing laboratories, reprocessing plants and other facilities such as the Naval Reactors Facility in Idaho.

Gordon-Hagery said the facilities are on the average 40 years old.

For example, recapitalization of the naval facilities at the Idaho Nuclear Laboratory is closely linked to the Columbia-class construction program.

Keeping all that spending in balance makes the task more daunting. “A change in one area [one weapons program] can affect others [infrastructure and other weapons program]” dramatically, he said.

Trimble categorized the weapons programs as being on the “high-risk list” because of their demands on the overall budget, the need to keep each synchronized with the other, all requiring infrastructure modernization and many needing a growing, competent workforce with the necessary security clearances even for non-nuclear work.

Gordon-Hagerty projected the nuclear weapons modernization program alone would have “a sustained, profound and significant” impact on the Pentagon’s budget. She told the panel the cost would consume about 6.5 percent of the defense budget, up from slightly more than 3 percent in recent years.

“We are leaning as far forward as we can” on all these efforts and making sure “that we have priorities correct.”

She told the panel she expected to report back by year’s end on infrastructure needs with cost estimates.