A top House Armed Services Committee member said the Navy needed a more aggressive attack submarine procurement plan to get the service to its 66-boat requirement on a shorter timeline.

Rep. Joe Courtney (D-Conn), the ranking member on the HASC seapower and projection forces subcommittee, told USNI News today that industry was capable of building three Virginia-class attack subs in a year as early as 2020 and that the Fiscal Year 2018 National Defense Authorization Act passed by the House and Senate this week includes a variety of measures to set up industry and the Navy for success at that higher build rate.

This congressional effort to push for up to 13 SSNs in the Block V contract, which covers FY 2019 through 2023 and would have to be negotiated by the end of this fiscal year, in September 2018, comes as two Navy leaders recently took a more conservative approach and argued for building two boats a year for now.

That two-a-year rate is still an increase compared to previous plans, which had called for only one SSN to be bought in years the Navy also bought a Columbia-class ballistic-missile submarine. Vice Adm. David Johnson, the military deputy to the Navy’s acquisition chief, and Brian Howes, acting director of the undersea warfare division (OPNAV N97) both said it was important to stabilize acquisition at two a year before looking for opportunities to increase acquisition. 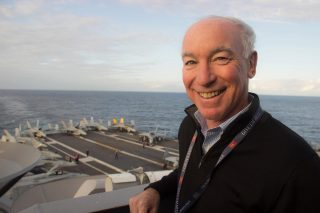 “As we developed the Seapower [section of the NDAA], we had direct meetings with Huntington Ingalls as well as with [Electric Boat] and we asked point blank whether this kind of an authority is achievable,” Courtney said of the three-a-year production rate at the two submarine builders, General Dynamics Electric Boat and HII’s Newport News Shipbuilding.
“ And the answer we got was that it was. And there’s just no question that, with Columbia sort of marbled into the workload and the (Virginia) Payload Module modification marbled into the workload, this is going to be a challenge, and that’s why we didn’t put three subs a year in [two of the] years of the block authority: we’re looking at ‘20, ‘22 and ‘23. And again, that was to space it out so they’re ready to take this on.”

Navy Secretary Richard V. Spencer, who has led the service for three and a half months now, may be interested in this more aggressive type of procurement schedule as well. Spencer, through spokesman Capt. Patrick McNally, told USNI News today that he is eyeing a different acquisition strategy.

“The Navy appreciates the wisdom of the NDAA defining the 355 ship Navy as law,” he said, referring to one provision in the bill that passed this week.
“The Department of Navy will work diligently to implement that decision rapidly and frugally with the resources that Congress may appropriate.”

Courtney, whose district includes the Electric Boat shipyard, said debate over how fast to procure SSNs is not new, with a “history going back to 2007 in terms of really almost having to drag the Navy by the ear to get Virginia-class block contracts enlarged.”

“Back in ‘07 when the Block III contract was under negotiation, again we got a budget from the Navy for one sub a year, and from the ‘Two-Sub Joe’ effort and the NDAA that year, along with [appropriators Rep.] Jack Murtha and Sen. [Daniel] Inouye, we got advance procurement that boosted the size of the block contract to eight submarines, which is not what [Navy was] saying the system was capable of. And the fact of the matter is they easily handled that larger block contract which Congress directed,” Courtney explained.
“So the next block contract, again when we were getting our briefings in 2011, 2012, the plan was for nine subs in the Block IV contract. Again, we passed the incremental funding language and also budgeted adequately to get to the 10 subs that are now part of the Block IV contract. Again, outside of what the Navy’s request was, Congress raised the bar in terms of what came through in that contract. And now we’re at sort of a pivotal point in Block V.”

Courtney said the Navy’s Force Structure Assessment, which was released last December and calls for a 66-SSN requirement compared to the previous 48-boat need, showed that the Navy was not only trying to stave off an attack sub shortfall but needed to more actively increase the size of the fleet.

“If you do the math, a two a year build rate, which again we’re on the cusp of the next block contract – we’re not going to get to 66 subs til the 2040s, and that’s not what the combatant commanders are telling us is acceptable right now. [U.S. Pacific Command commander Adm.] Harry Harris, who is an honorable voice in the U.S. Navy, every time he has testified before the Armed Services Committee and Appropriations Committee has said he needs more submarines. And again, a two-a-year block buy for Block V is just not going to meet that need that’s out there right now. And the same is true of European Command with Gen. [Curtis] Scaparrotti,” Courtney said.
“And so when we did the NDAA calling for up to 13 subs, which if you do the math means that we’re authorizing three out of the five years to have three subs a year – you know, it was not just some aspirational goal that’s disconnected from any strategic analysis or historical basis in terms of why we believe that we can and should go higher. And I would note that we put in economic order quantity funding, which lays the groundwork for getting to that goal starting in 2020. I think that’s an important point to emphasize: again, this is not just some wish list that we put in there; this thing was the result of hard analysis that was done at the staff level with Navy input, and again I think it tracks exactly what we saw in past years, when I think Congress correctly determined the Navy was lowballing the request for the Block III and Block IV contracts. So again, the perspective from Capitol Hill was that we were listening to the Navy in terms of what they presented us in the [Force Structure Assessment] as well as the combatant commanders that are out there, and I think what we’ve passed in the House is a very pragmatic doable plan that had input from the industrial base as well as from the … Navy.”

The Connecticut congressman acknowledged the workload wouldn’t be easy – with each Columbia-class SSBN equating to about two Virginia SSNs in terms of workload, industry would be asked to go from two SSNs a year now to essentially either three or four SSN’s worth of work in the future, either in the form of 3 Virginia-class subs or two Virginias and a Columbia.

“We’re stretching their muscles in terms of this authority,” Courtney acknowledged, “but definitely this is kind of a replay of what the Navy’s caution was for Block III and Block IV, and I think what has played out has showed Congress made, I think, the right call in challenging the industrial base and mitigating what would have been an even worse decline in the fleet size if we hadn’t moved as we did in Block III and Block IV. And again, to address the Navy’s caution, we put in economic order quantity authority recognizing that we need to prime the pump to make sure that this is a schedule that makes sense.”

He said the Navy has been a true team player on the successful Virginia-class submarine program, despite earlier differences on how many subs to buy in each block. He said he’s confident the two sides can come to an agreement now, but noted that ultimately “demand signal at the end of the day comes from Congress.”

With a Block V contract scheduled to be signed by next fall to support a 2019 start, Courtney said the 2018 NDAA has given the Navy all the authorities they could need to buy smartly and prep the two builders and the thousands of companies in the submarine supply chain for an increased workload.

“Right now is the time they’re negotiating a five-year block, and once that’s done your hands are tied going outside the contract,” he said of the importance of coming to a quantity agreement now.
“Going back to the first ships that were ever built in the Navy, it was Congress that set the demand signal. And again, with the Virginia-class program, the history is crystal clear that that’s been the case – if people had just accepted what the Navy had planned in ’07 and ’12, we would be missing submarines that the combatant commanders are telling us are desperately needed.”