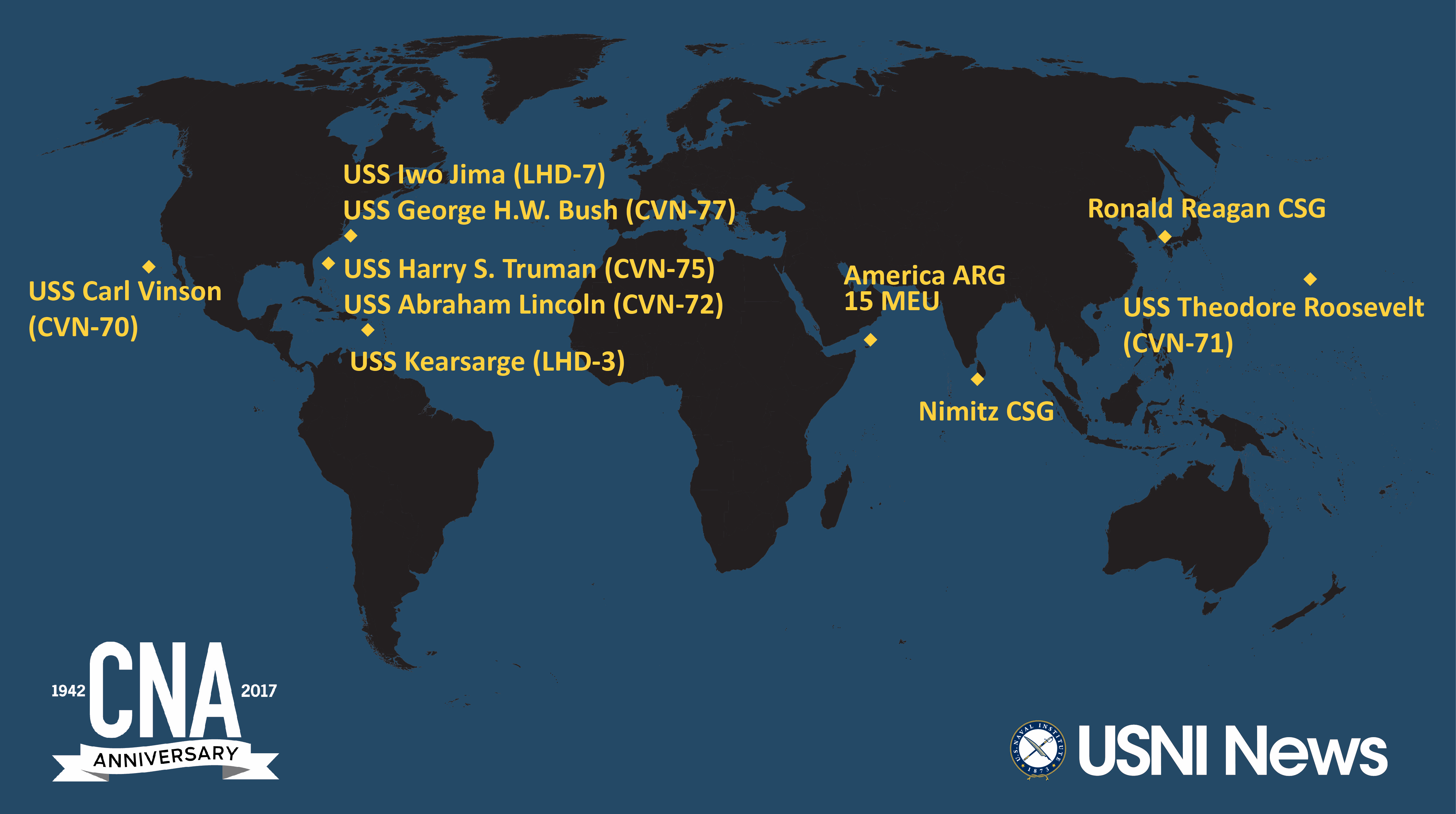 The USNI News Fleet and Marine Tracker is sponsored by CNA.
These are the approximate positions of the U.S. Navy’s deployed carrier strike groups and amphibious ready groups throughout the world as of Oct. 30, 2017, based on Navy and public data. In cases where a CSG or ARG is conducting disaggregated operations, the map reflects the location of the capital ship. 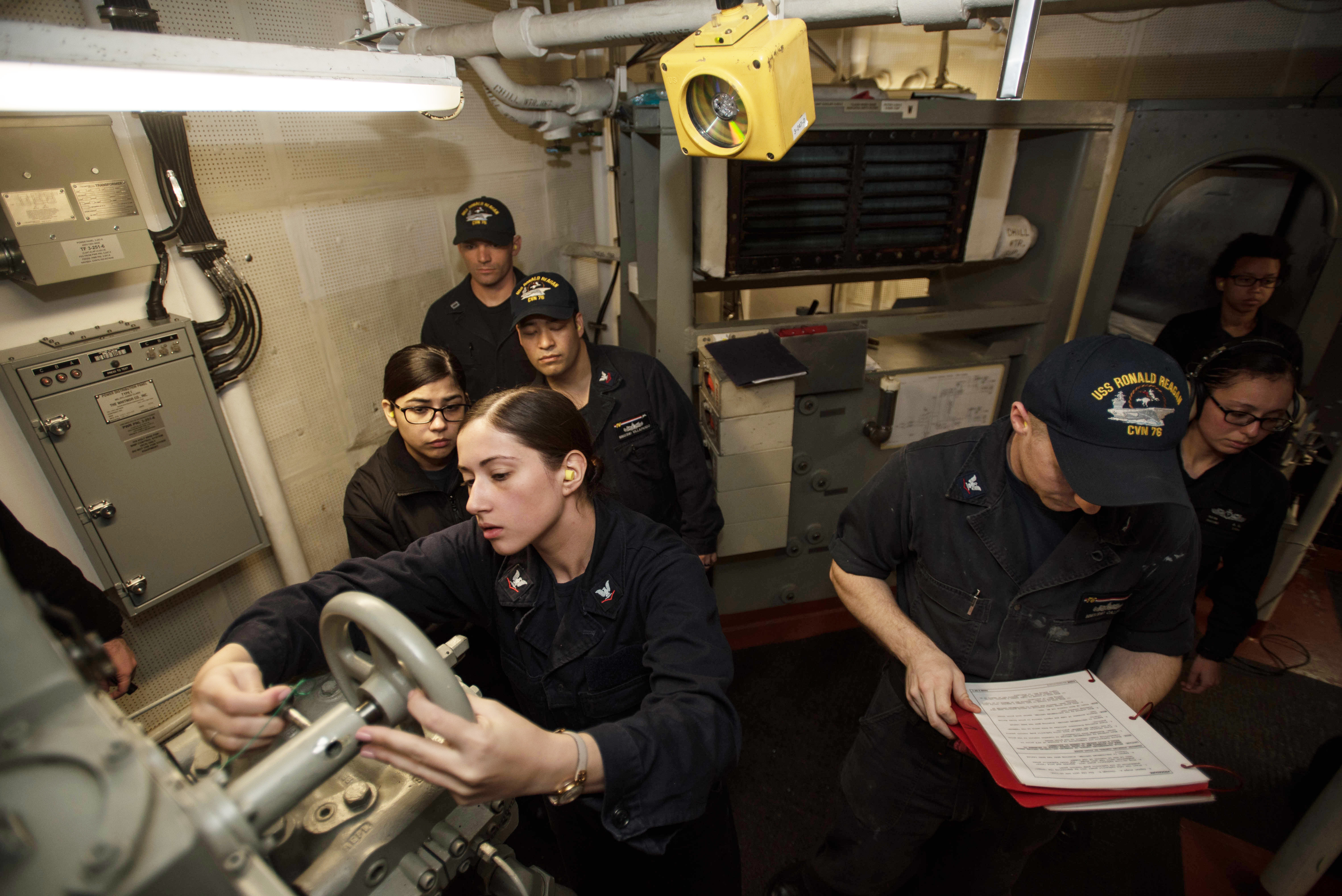 Sailors transfer steering control to the pilot house from port aft steering of the Navy’s forward-deployed aircraft carrier, USS Ronald Reagan (CVN-76), prior to departing the pier on Oct. 26, 2017. US Navy Photo

USS Ronald Reagan (CVN-76) is operating in the Sea of Japan and could conduct multi-carrier operations with USS Theodore Roosevelt (CVN-71) and USS Nimitz (CVN-68). The U.S. Navy periodically conducts large-scale exercises that involve several carriers. The last time three carriers operated together was during the 2007 Valiant Shield exercise.

“These three carriers are not there specifically targeting North Korea,” the chairman said.
“This is a routine demonstration of our commitment to the region.”

The chairman did acknowledge closer attention is being paid to Pyongyang in light of its actions, saying, “I think it’s fair to say that all of us have a heightened sense of urgency for the past year and a half, and in particular, in the last couple months.” 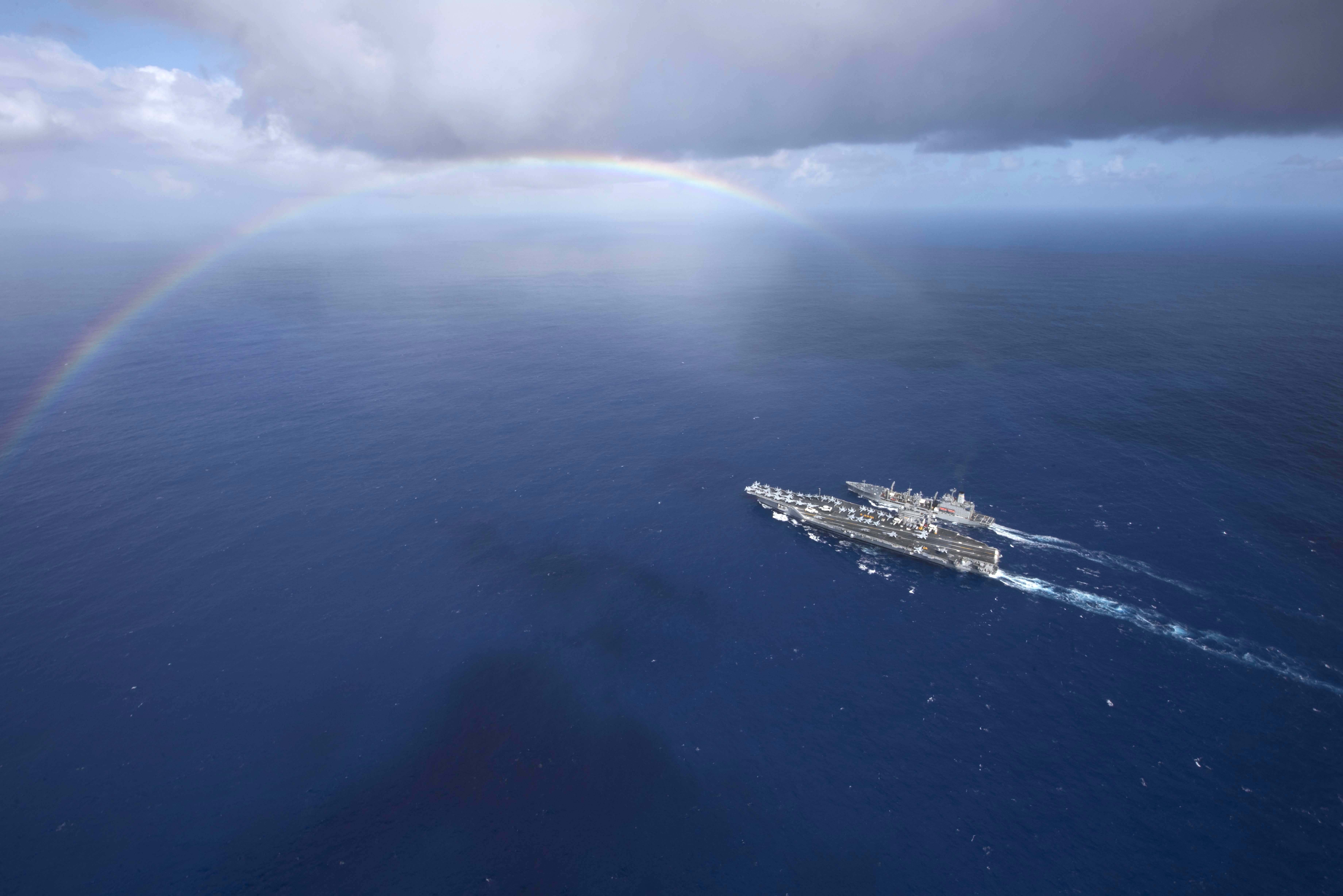 The Theodore Roosevelt Carrier Strike Group entered the U.S. 7th Fleet area of responsibility on Oct. 24. The ship conducted air operations near the U.S. holding of Wake Island on Oct. 26, according to the Navy.

The Theodore Roosevelt CSG is expected to conduct multi-carrier operations off of the Korean Peninsula with the Ronald Reagan CSG and Nimitz CSG later this week. 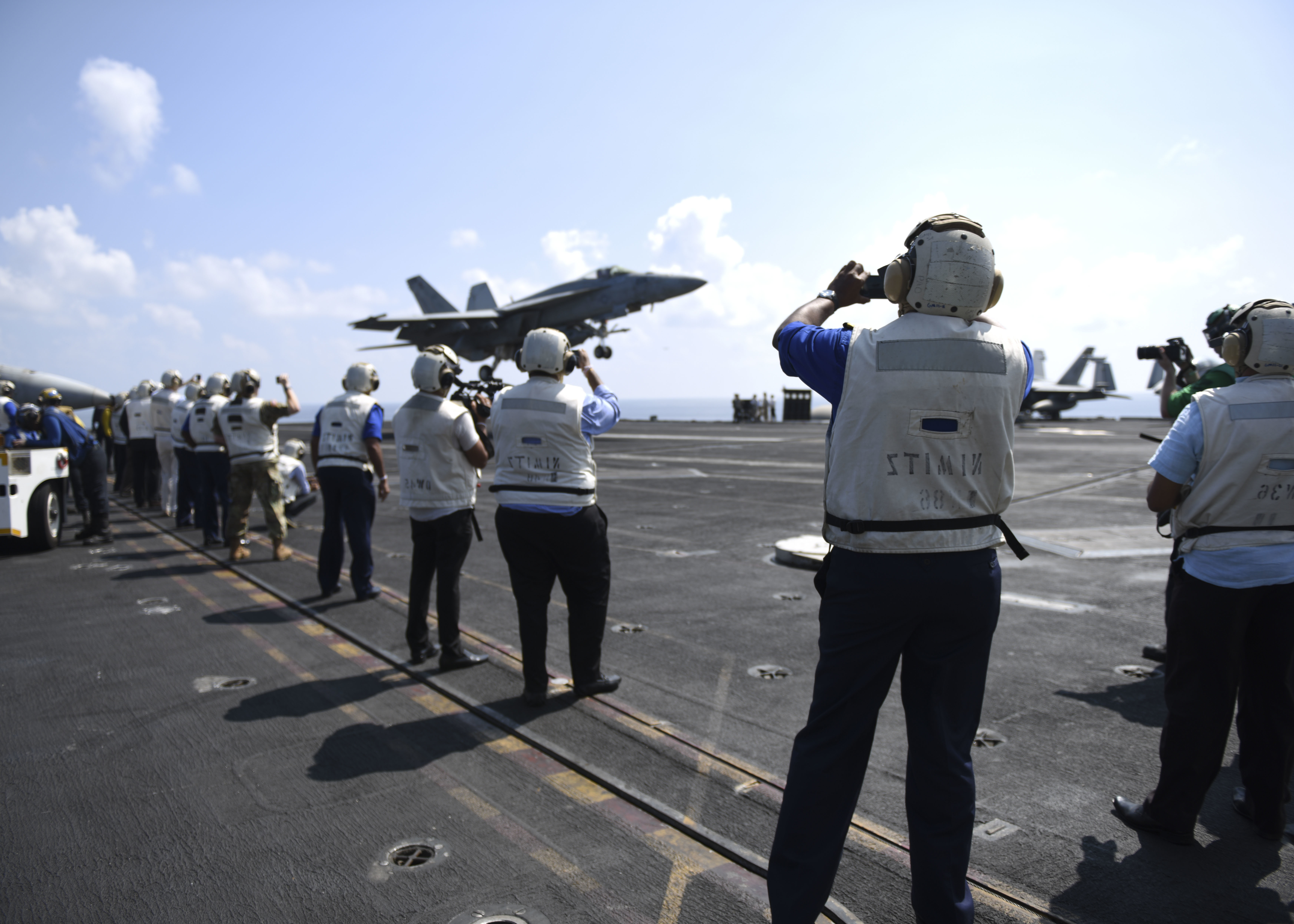 A group of distinguished visitors observe flight operations on the flight deck of the aircraft carrier USS Nimitz (CVN-68), Oct. 27, 2017, in the Arabian Sea. US Navy Photo

The Nimitz CSG arrived in Sri Lanka on Saturday, Oct. 28.

In the Northern Arabian Sea 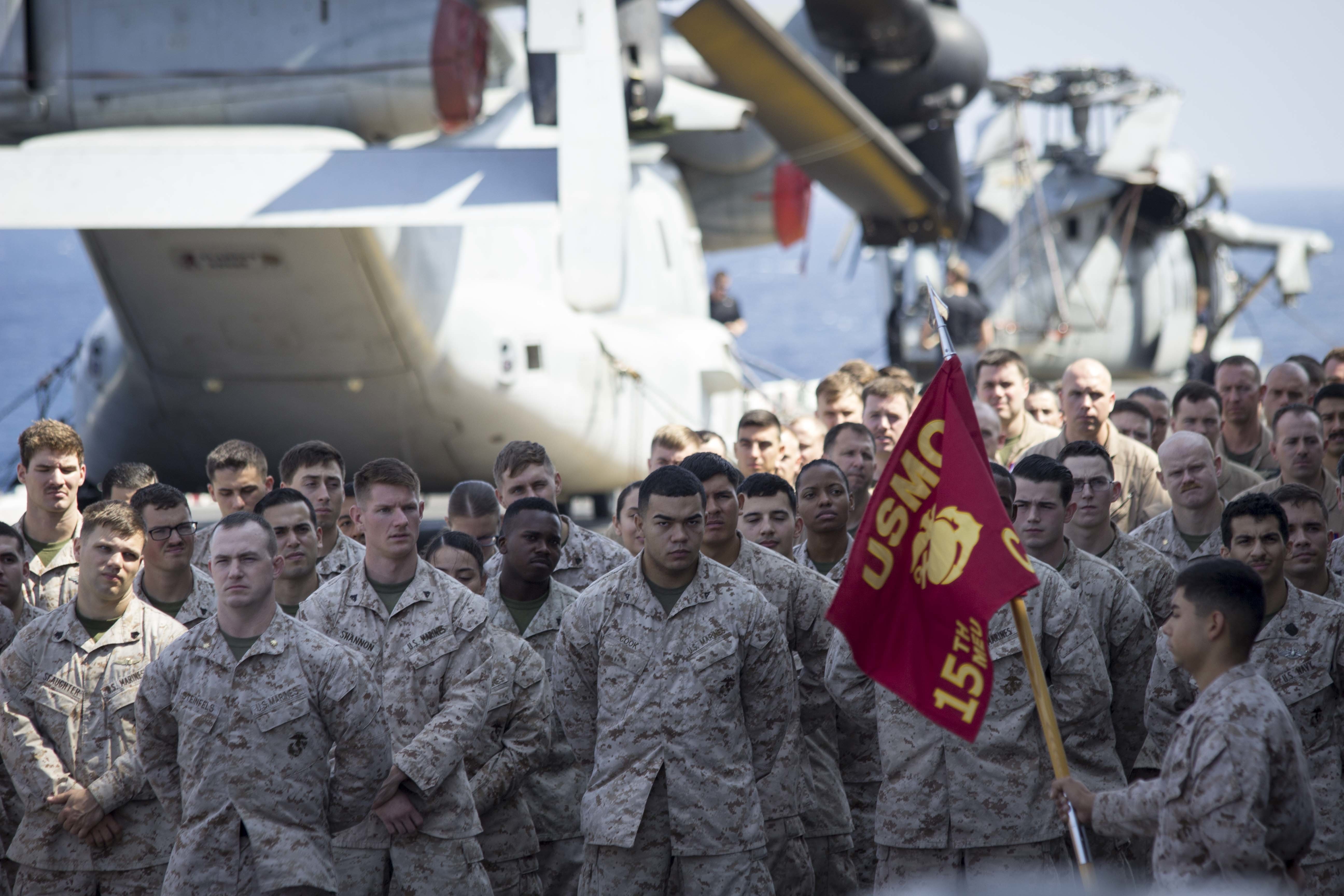 Marines and sailors stand in formation aboard the amphibious assault ship USS America (LHA-6) during an all hands formation on the flight deck. Oct. 27, 2017. US Marine Corps Photo

Other ARG units are participating in Exercise Iron Magic 18, a military exercise between the UAE Armed Forces and U.S. forces that started Oct. 19. 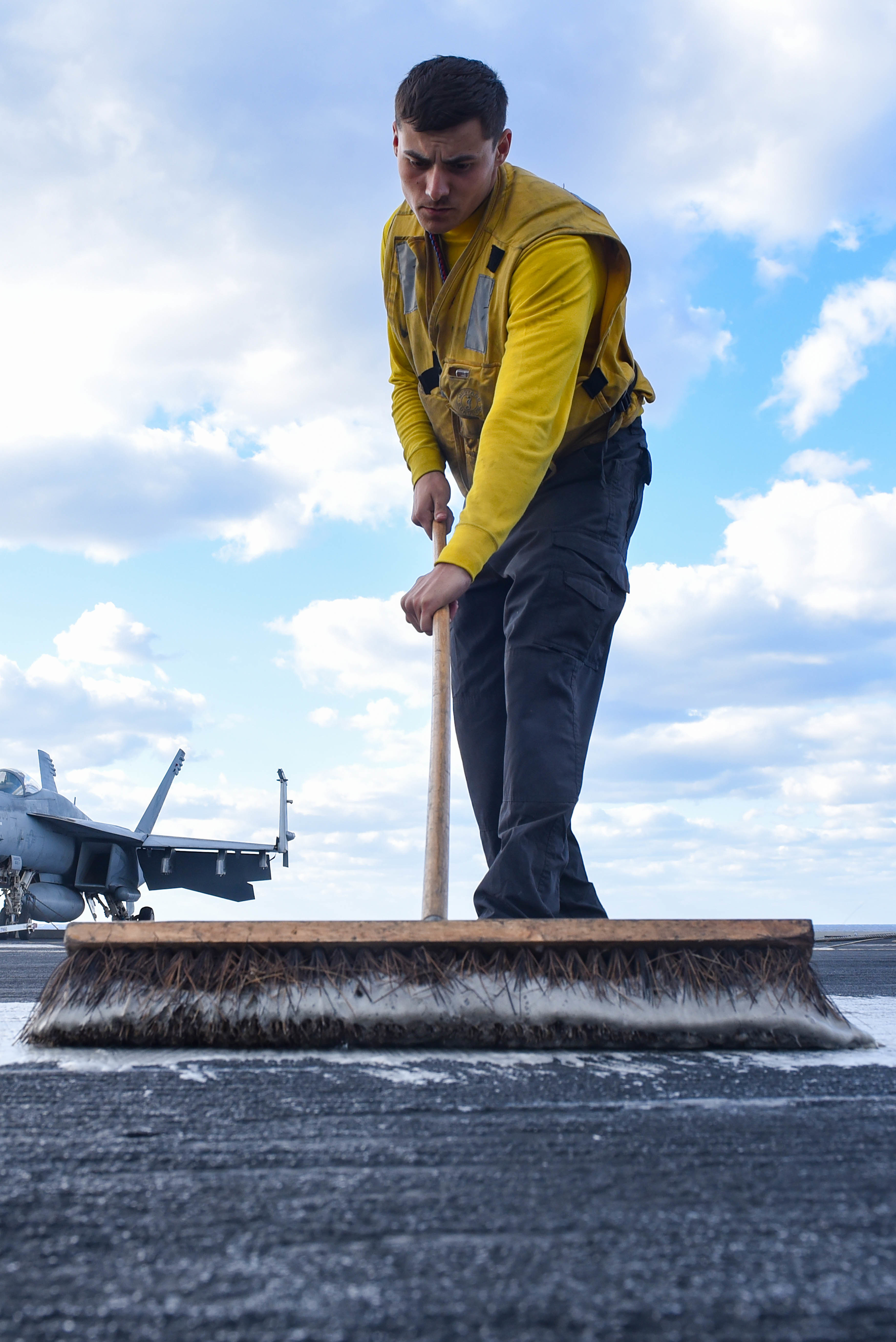 Amphibious exercise Bold Alligator 17 off the coast of North Carolina has completed.

USS Harry S. Truman (CVN-75) is underway in the Fleet operations areas off of Norfolk, Va., conducting a Tailored Ship’s Training Availability (TSTA). This is the final step in individual ship training and culminates in a Final Evaluation Problem (FEP). The next underway phase of the carrier’s training will include other ships as Truman continues deployment work-up.

Wasp is ultimately bound for Japan to join the forward-deployed naval forces and likely become the first amphibious warship to deploy with the F-35B Lighting II Joint Strike Fighter.

USS Kearsarge (LHD-3), the Marines of the 24th MEU and Seabees from Amphibious Construction Battalion 2 continue to support the humanitarian relief efforts for Hurricanes Irma and Maria in Puerto Rico. 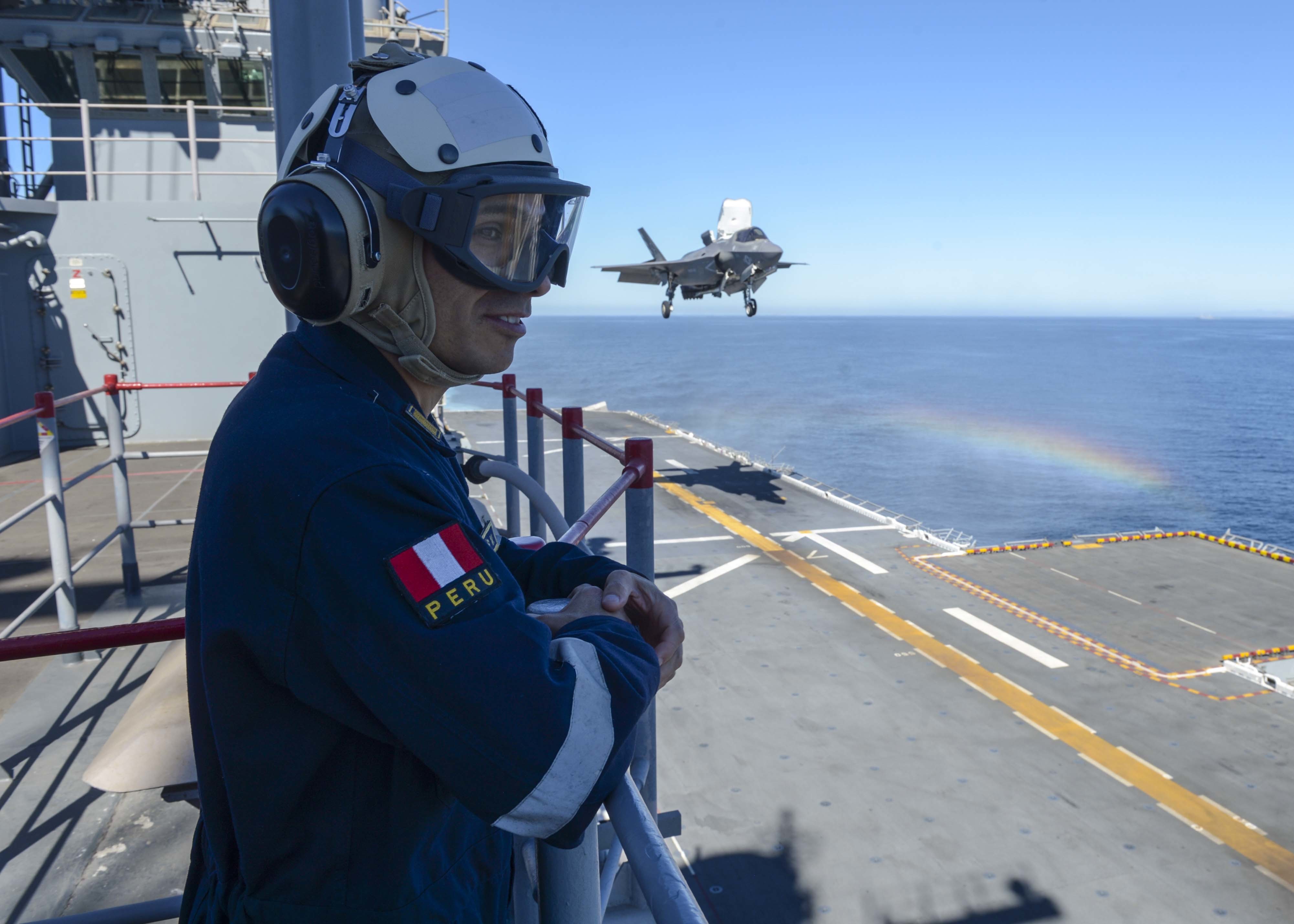 USS Carl Vinson (CVN-70) launched and recovered a F-35C. The Vinson and is set to be the first carrier in the Pacific Fleet to deploy with an F-35C squadron.

Meanwhile, not too far up the coast, exercise Dawn Blitz was in full swing, designed to train the Navy and Marines to conduct a large scale amphibious assault. For the first time, F-35Bs are participating, according to a Navy statement.

Flying from the assault ship USS Essex (LHD-2), six aircraft have provided air support and are fully integrated into the exercise’s scenarios. The lessons learned from this exercise will be applied to sea deployment of the F-35B, which could still happen this year.