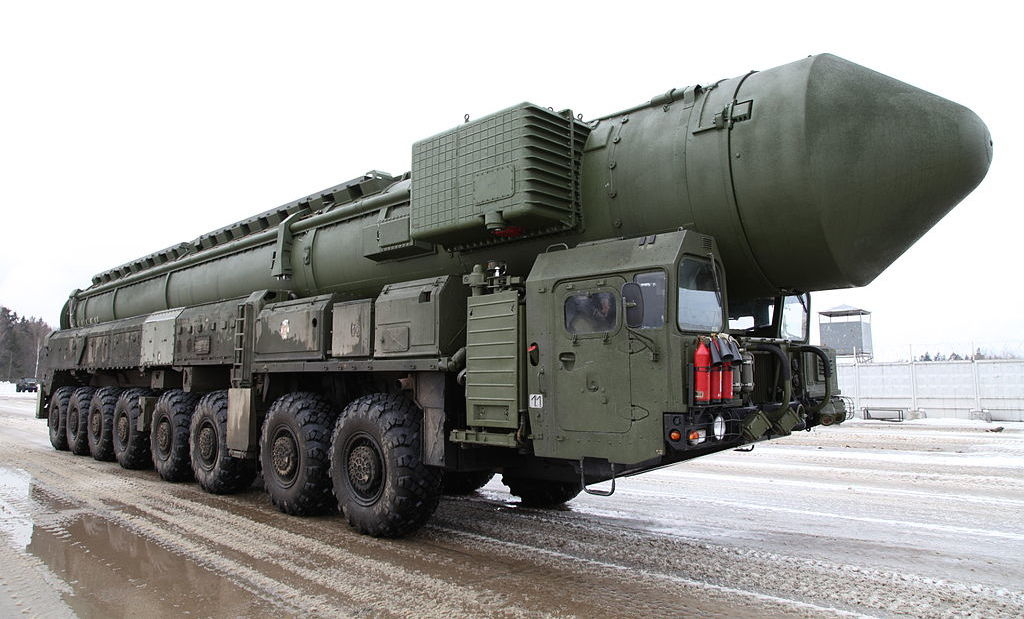 Nuclear escalation — tactical and strategic — is something Russians can use to cow their neighbors to get their way is real, but what may happen after using those weapons remains a deterrent to putting that doctrine into play, the co-author of a new report on Washington-Moscow conflict told USNI News last week.

While the fundamental strategic balance between the two countries remains in place, there have been changes over the years in how each views the others and what either will do to protect itself, Richard Fontaine, president of the Center for New American Security, said Friday.

For example, Moscow’s placement of cruise missiles close to its western borders does violate the Intermediate Range Nuclear Forces Treaty, Fontaine said. The Russians claim that the placement of Aegis Ashore in Poland and Romania to deter missile attacks from Iran on NATO countries likewise broke the 1987 agreement.

As the nuclear relationship stands now between the United States and Russia, Fontaine does not see a push to build a large missile defense system to counter Russian missiles. Aegis Ashore systems already in place and planned in the near future are stated to meet threats from North Korea and Iran.

The danger of a nuclear confrontation between the United States and Russia, “remains, thankfully, very low.”

Nevertheless, time to react to a ballistic missile carrying a nuclear or conventional weapon remains a constraint, and could force leaders into a decision “to use or lose,” the report notes. Fontaine said CNAS plans a follow-on report dealing with the issues involving conventionally armed missiles.

Political leaders in Washington, Moscow and Beijing still focus on mutual assured destruction when it comes to thinking about deterring a ballistic missile barrage from the United States, Russia or China.

The future Columbia-class ballistic missile submarines appear to be the most survivable deterrent in the nation’s nuclear arsenal into the future, Fontaine said. It is part of a “needle in the haystack” defense, the report says. The Russian approach in that area is to place ICBMs on mobile launchers.

When asked about unmanned autonomous airborne or underwater systems changing the nuclear equation, which both countries are investing in, Fontaine said it was too early to tell.

However, unmanned underwater systems could make “anti-submarine warfare very different” from how it is envisioned today.

The report examines in detail the increasing challenges faced in the cyber and space domains where the greatest future challenges to stability lay.

Splitting Cyber Command from the National Security Agency makes sense “because the missions are fundamentally different” and they can be “organized to maximum advantage.” As a separate entity, Cyber Command “can work with the rest of the military in developing” offensive and defensive capabilities. At the same time, NSA can work more closely with the private sector on its defenses and learn of its capabilities.

“That would be the upside of the split.”

The idea of a Space Corps, which has surfaced in Congress as a possible sixth uniformed service, “is an intriguing idea.” The idea is beef up security because the United States is so dependent on space assets — global positioning satellites, as one example — not only for military operations but daily life in the view of its Capitol Hill supporters and in the defense establishment. The proposal during this congressional session and pushed by Reps. Mike Rogers (R-Ala.) and Jim Cooper (D-Tenn.) actually resurfaced a recommendation from a commission chaired by Donald Rumsfeld in 2000 before he again served as Defense secretary.

But as is the case with persons with cyber skills, Fontaine said how would the government recruit and retain this force: Would they have different entry points for service, be drawn from businesses such as Space X, possibly serve as a reserve component? “How are you going to do that? What’s the model?”

The military’s push for resiliency in the wake of potential cyber and space attacks — even down to re-teaching compass use in land navigation and reading a sextant at sea — makes sense when satellites “go dark for 24 hours and you have no access to satellite data,” but realistically individuals still depend on this [kind of space] technology” for a range of activities.