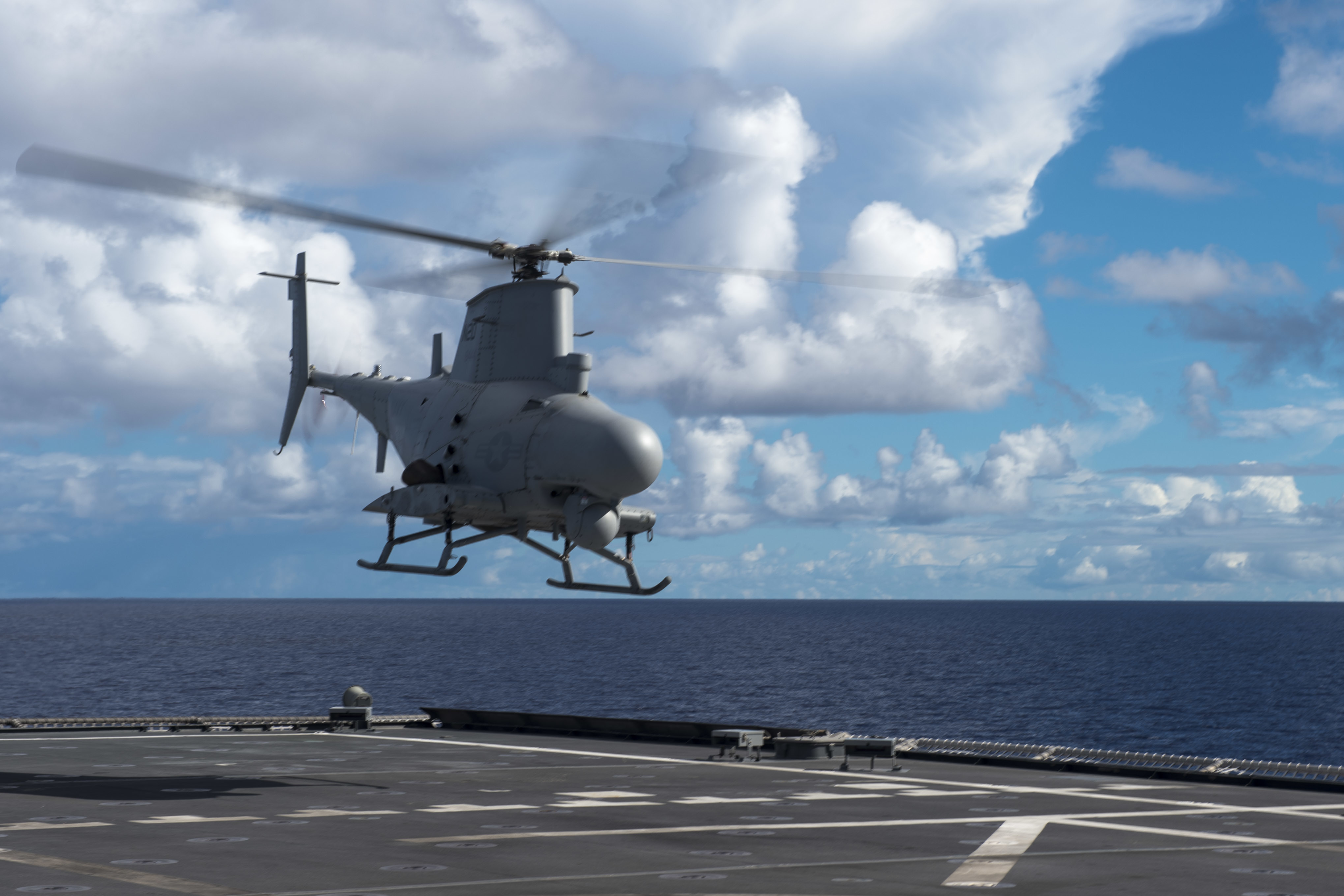 A Firescout unmanned aerial vehicle takes off from the flight deck of the littoral combat ship USS Coronado (LCS 4) off the coast of Guam on Aug. 22, 2017. US Navy photo.

An MQ-8B Fire Scout unmanned aerial system and a MH-60S Seahawk helicopter, both of which deployed with Coronado as part of its air detachment, provided targeting data for the Aug. 22 missile shot.

“LCS will play an important role in protecting shipping and vital U.S. interests in the maritime crossroads,” Rear Adm. Don Gabrielson, commander of Task Force 73, said in a Navy news release.
“Its ability to pair unmanned vehicles like Fire Scout with Harpoon missiles to strike from the littoral shadows matters – there are over 50,000 islands in the arc from the Philippines to India; those shallow crossroads are vital world interests. Harpoon and Fire Scout showcase one of the growing tool combinations in our modular LCS capability set and this complex shot demonstrates why LCS has Combat as its middle name.”

“Our crew and air detachment really came together as a team to accomplish this live-fire event,” Cmdr. Douglas Meagher, Coronado’s commanding officer, said in the same news release.
“Our Sailors worked hard to prepare for this exercise and I’m extremely proud of the way they performed.”

Coronado fired its first over-the-horizon Harpoon shot last summer at the Rim of the Pacific (RIMPAC) 2016 exercise off Hawaii. USS Freedom (LCS-1) was supposed to be outfitted to fire a Kongsberg Naval Strike Missile last summer too, but the Navy ran out of money and had to cancel the ship modification and missile procurement effort, meant to inform decisions around a permanent over-the-horizon anti-ship missile solution for the LCSs.

Harpoon is built to attack a range of surface targets. It can be launched from surface ships, submarines and aircraft, and it is currently used on 22 cruisers, 21 Flight I destroyers and seven Flight II destroyers, along with testing on the Littoral Combat Ship. 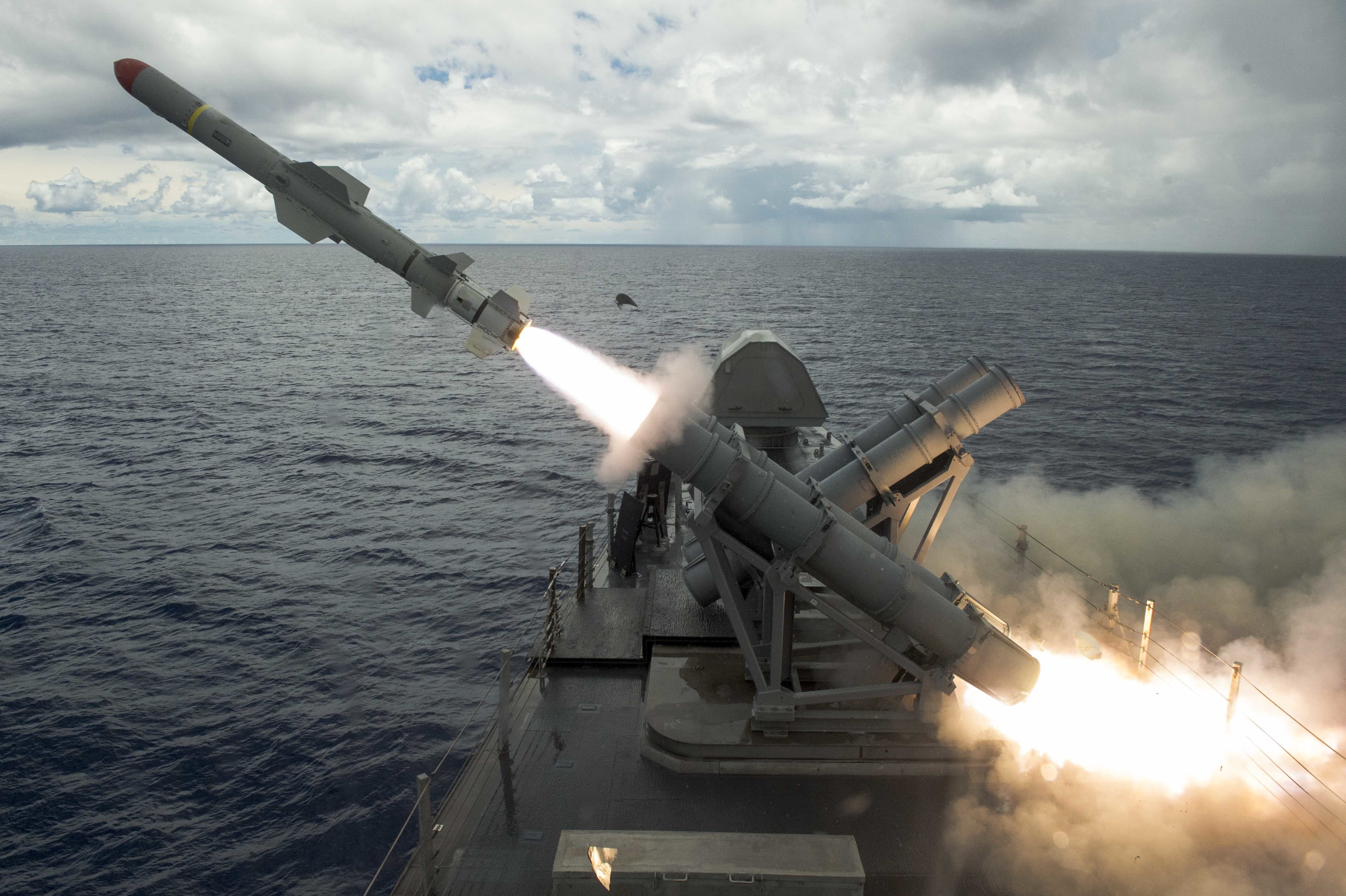 A harpoon missile launches from the missile deck of the littoral combat ship USS Coronado (LCS 4) off the coast of Guam on Aug. 22, 2017. US Navy photo.

Coronado’s first Harpoon shot last summer did not on its own sink its target, the decommissioned frigate USS Crommelin (FFG-37), though a larger effort by multiple ships and aircraft ultimately sank the ship. The Navy’s news release says lessons learned from that event helped inform this week’s shot, which came as part of exercise Pacific Griffin 2017 with the Republic of Singapore Navy.

“USS Coronado’s success in a real-world deployment of the harpoon missile system is a result of how we are changing the way we operate and think about LCS,” Capt. Lex Walker, commodore of Destroyer Squadron 7, said in the release.
“By focusing on how a deployed LCS fits in the larger maritime domain with regional partners, we are ensuring a secure and cooperative regional environment while increasing the ship’s capabilities.”