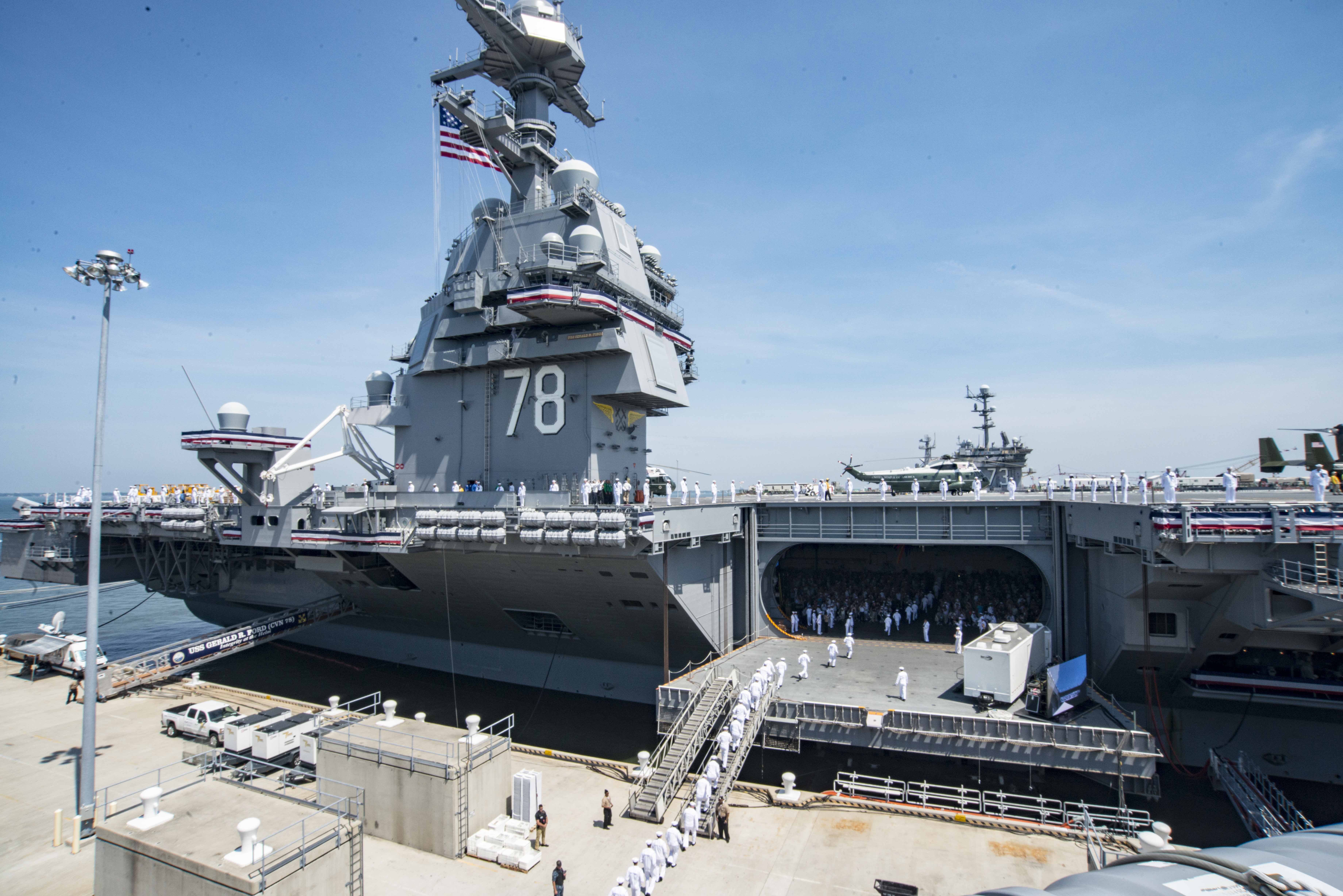 Sailors man the rails of the aircraft carrier USS Gerald R. Ford (CVN 78) during its commissioning ceremony at Naval Station Norfolk, Va. Ford is the lead ship of the Ford-class aircraft carriers, and the first new U.S. aircraft carrier designed in 40 years. US Navy photo.

ABOARD USS GERALD R. FORD – Saturday’s commissioning of aircraft carrier USS Gerald R. Ford (CVN-78) was a celebration of the end of a long and at-times hard road to bring the warship and its many new technologies to the fleet – a path the Navy may not choose to take again.

Ford was designed under President George W. Bush and Defense Secretary Donald Rumsfeld, as the Pentagon sought transformational new technologies. The carrier, then, was packed with major cutting-edge technologies: a steam-free Electromagnetic Aircraft Launching System, an Advanced Arresting Gear, a powerful Dual-Band Radar, a new nuclear propulsion and power distribution system, and advanced weapons elevators. In all, the ship class has 23 distinct changes and upgrades from the Nimitz-class carriers.

“This is a herculean task, I don’t think people understand the monumental quantum leaps in technology, whether it’s the electromagnetic launch system, the advanced arresting gear, the new systems onboard,” House Armed Services seapower and projection forces subcommittee chairman Rep. Rob Wittman (R-Va.) told USNI News before the commissioning ceremony.
“It’s really an amazing testament to the Navy, to the shipbuilders in being able to put that together, to test it, to get it to work. If you look at the progress in technology like EMALS originally that hiccupped a little bit and how it is today with it being onboard, it’s really a testament to the Navy and to the shipbuilders as to how they did that. We don’t always expect that new technology, but if we don’t push the envelope on what we can do then we never learn and we never get to deploy those technologies.” 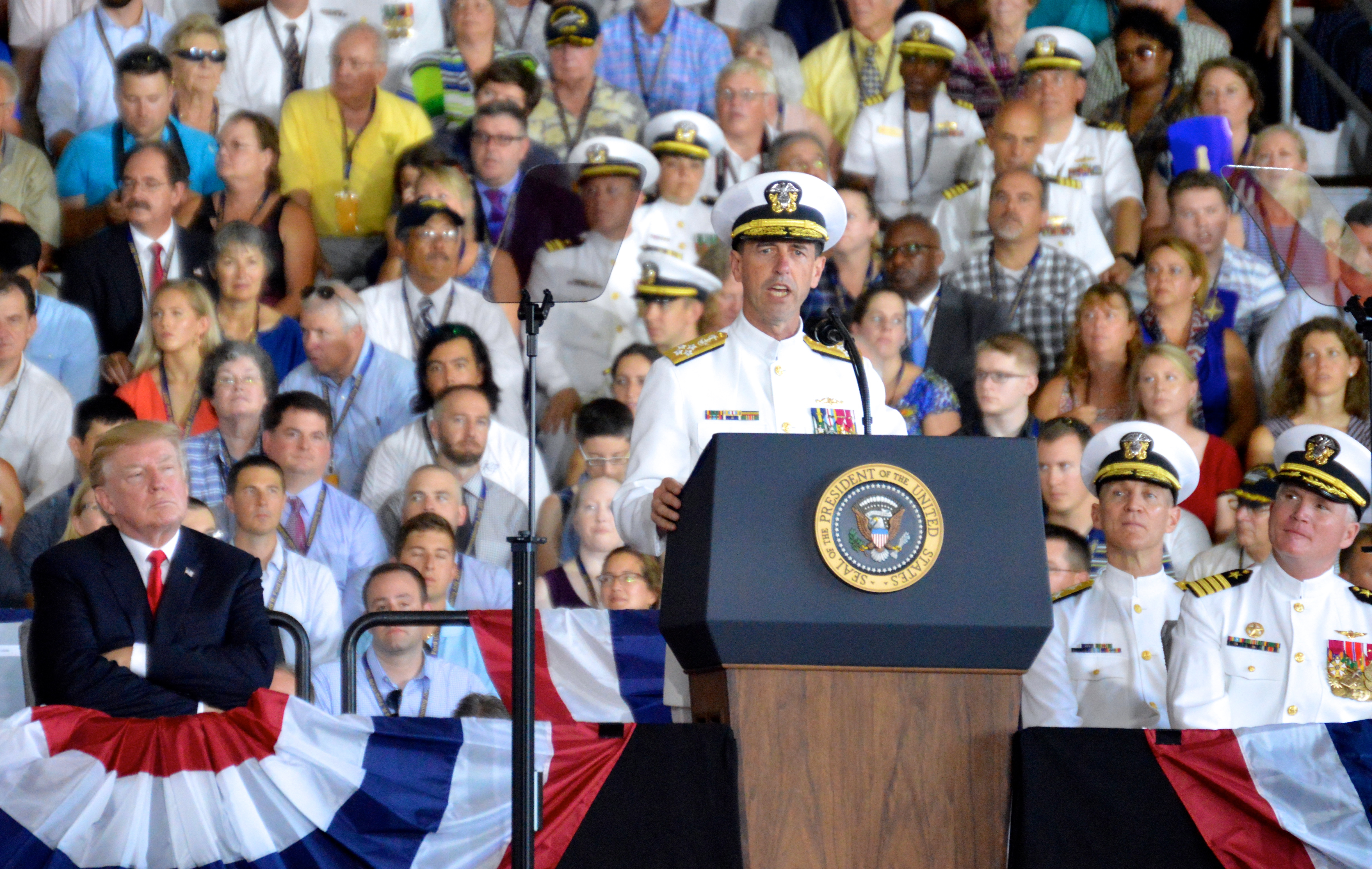 Despite the congressman’s praise for those involved in overcoming the technical challenges that have arisen over the past several years of construction and testing, Chief of Naval Operations Adm. John Richardson told USNI News before the ceremony that the Navy may avoid massive capability leaps like Ford in the future, to cut down on risk, cost and schedule.

“When we look back, the Ford took on some major goals for ourselves, some real reach goals in terms of technology. And so as we look forward to designing and building ships of the future, particularly given how quickly technology is advancing, maybe we take smaller steps,” he said.
“Instead of something that will deliver in 15 or 20 years, we do something that will deliver in five years, and then we do five years after that, and we sort of take smaller steps to arrive at the technology and capability curve and deliver with more confidence and on budget, on schedule.”

Richardson made that same point a day earlier, while giving a speech to science and technology experts on July 21 in Washington. Speaking to industry about the MQ-25 unmanned aerial vehicle specifically, the CNO said, “show us the trade space here. what is the technological landscape, so we can find the knee in the curve, come up with the solution that has appropriate technical maturity, and put together a program that is about right on the risk curve, so that there’s not too much uncertainty, too many unknowns as we go forward. Now that will likely, that knee in the curve is not an exquisite solution that will last for the next 20 years, but that’s not the model. The model is, we’re going to do a lot better than what we’ve got right now, and we’re going to do that with a lot more certainty and confidence than we would if we’re trying to project forward decades. And then we’re going to build in a much faster iterative process – so this will be step one, and we’ll sort of design in modernization from the start. So I don’t have to worry about lasting 20 years, being that good. You tell me when it’s time to take the next step and we’ll iterate forward another step, so it’s almost this spiral development process, even for major programs.”

Richardson added in the Friday speech that upcoming ship classes like the frigate would follow this same model, leveraging mature technologies today and building in space, weight and power margins to add new technologies later on.

For Wittman, his focus was fielding these new technologies quickly – and in the case of Ford, that means getting the ship through its post-delivery tasks quickly and getting the ship to the operational fleet, without first putting the carrier through shock trials. The House Armed Services Committee debated this issue earlier this spring, with the committee ultimately expressing its desire to postpone shock trials until the second-in-class John F. Kennedy (CVN-79), which is what the Navy had hoped to do but the Pentagon under former Secretary Ash Carter would not allow.

“We’re having the Navy come in and brief us on the regime for shock trials, what they’ve done to, through modeling and simulation shock systems on the boat, to figure out how they would respond,” Wittman told USNI News about his work to convince the Pentagon to reverse its previous position.
“I think that is a very effective way to go about doing it. The key for us is, we don’t want to delay the Ford coming to the fleet, we believe that she will do fine in shock trials. If you look at other ships, the Navy doesn’t normally shock the first ship in the class, so I don’t think that there’s an issue waiting to shock the next ship knowing that we have already done the modeling and simulation shock trials for systems onboard. So I think the Navy has it right, but we want to hear from them, ask questions about how they’ve come to this decision.” 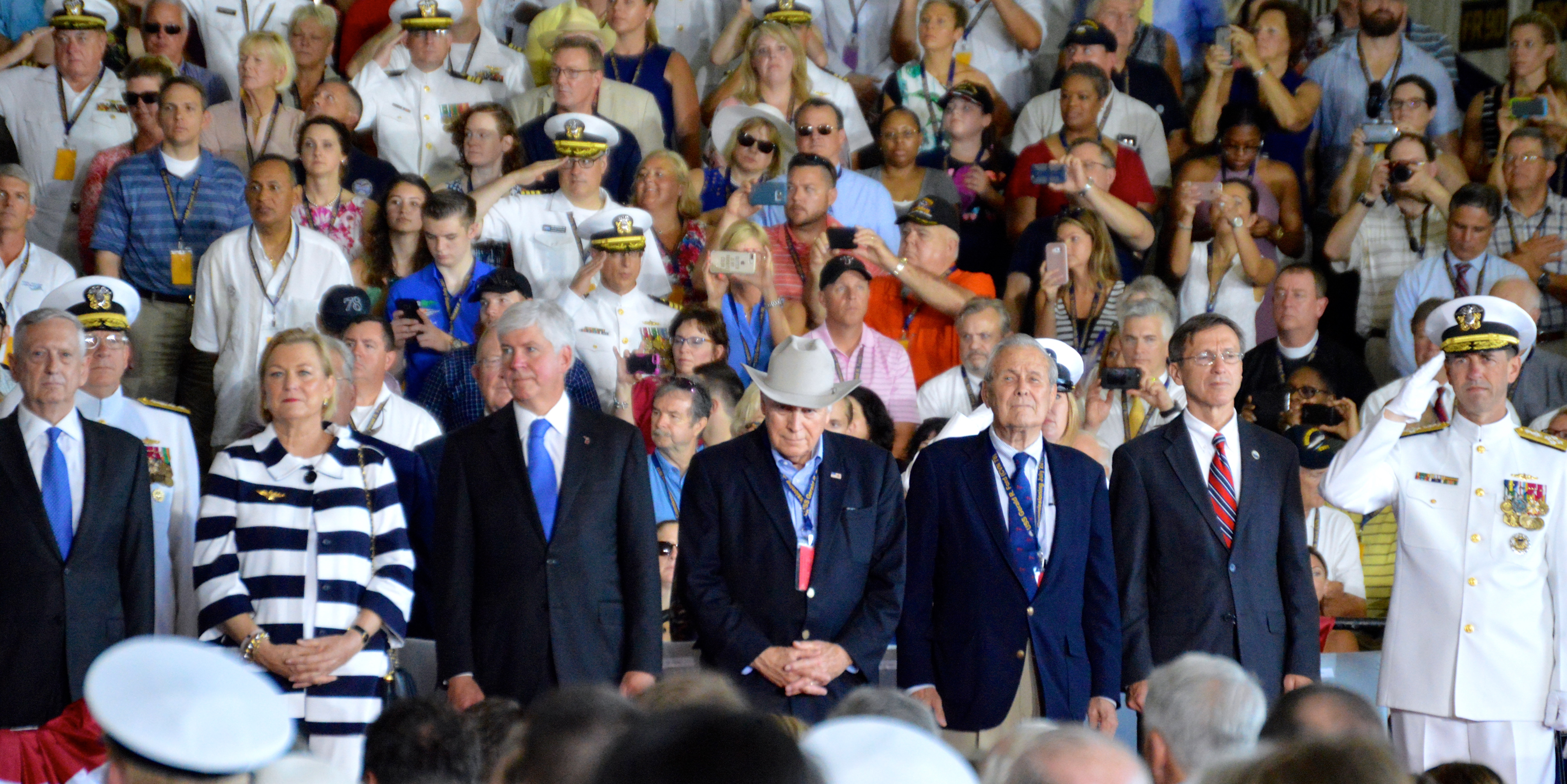 There is also a sense of urgency to field the ship quickly, as the Navy is legally obligated to maintain an 11-carrier fleet but has been working with 10 since the ex-USS Enterprise (CVN-65) decommissioned in December 2012.

“We take all the responsibilities we have – where we have to be and when we have to be there – and then we sort of take the Navy that we’ve got and divide it up. When you have fewer ships, fewer carrier strike groups, that means the ones you have are out there a little bit longer,” Richardson told USNI News.
“So the addition of the Gerald R. Ford and her intended carrier strike group and air wing, that’s another huge addition which will sort of alleviate the stress on the rest of the fleet.”

“I know as I strolled in the back and spoke to the sailors and their families, they are really really excited,” Wittman told USNI News.
“I spoke to one young sailor who said he’s ready to go to sea. They’ve got a busy schedule, they’re going to be at sea for 110 of the next 180 days, so really really busy times. But it’s great. What makes these ships great is not just the technology onboard, but we have the best sailors anywhere in the world. They know their jobs, they’re experts, they’re willing to serve this nation and make that sacrifice to spend those numbers of days at sea and make sure Ford does what she needs to do.”

Sailors aboard the ship told USNI News during a post-ceremony tour that the ship will be headed back to sea soon and hopefully start air operations within the next couple weeks, potentially as soon as next week. The ship has so far conducted helicopter operations on the flight deck but has not landed or launched any fixed-wing aircraft. The Advanced Arresting Gear is still in the final stages of installation, the sailors said, after a problem was discovered in 2015 and the solution finally developed and tested in fall 2016. Earlier this month the Navy and contractors worked to finish running cables and installing other components of AAG, so it could be finalized in time to begin flight deck operations during the shakedown period.

“This is a monumental day to now have the first of the Ford-class in the fleet, now undergoing her testing so we can get her deployed. A lot of attention about construction, about new technology being employed onboard. As we see, everything has worked out. It’s taken a little bit longer than what I think people expected, a few more dollars than what people expected, but I do believe the efficiencies we’ll see will show up on the John F. Kennedy and subsequent aircraft carriers. So today is a really important day. The amount of new technology on this ship is amazing – the sorties it can generate, the things it can do, especially in today’s environment when we’re concerned about anti-ship capabilities from other nations, this is a key. So this is a really important day, a really exciting day,” Wittman said.
“Especially as we hear almost on a daily basis about the anti-access/area-denial, the capacities of our adversaries, the anti-ship capabilities there, we have to do those things. So Ford’s capability gives us the opportunity to counter what our adversaries may bring to the line, and that to me is key. So today’s a really exciting day to see that come to realization.”