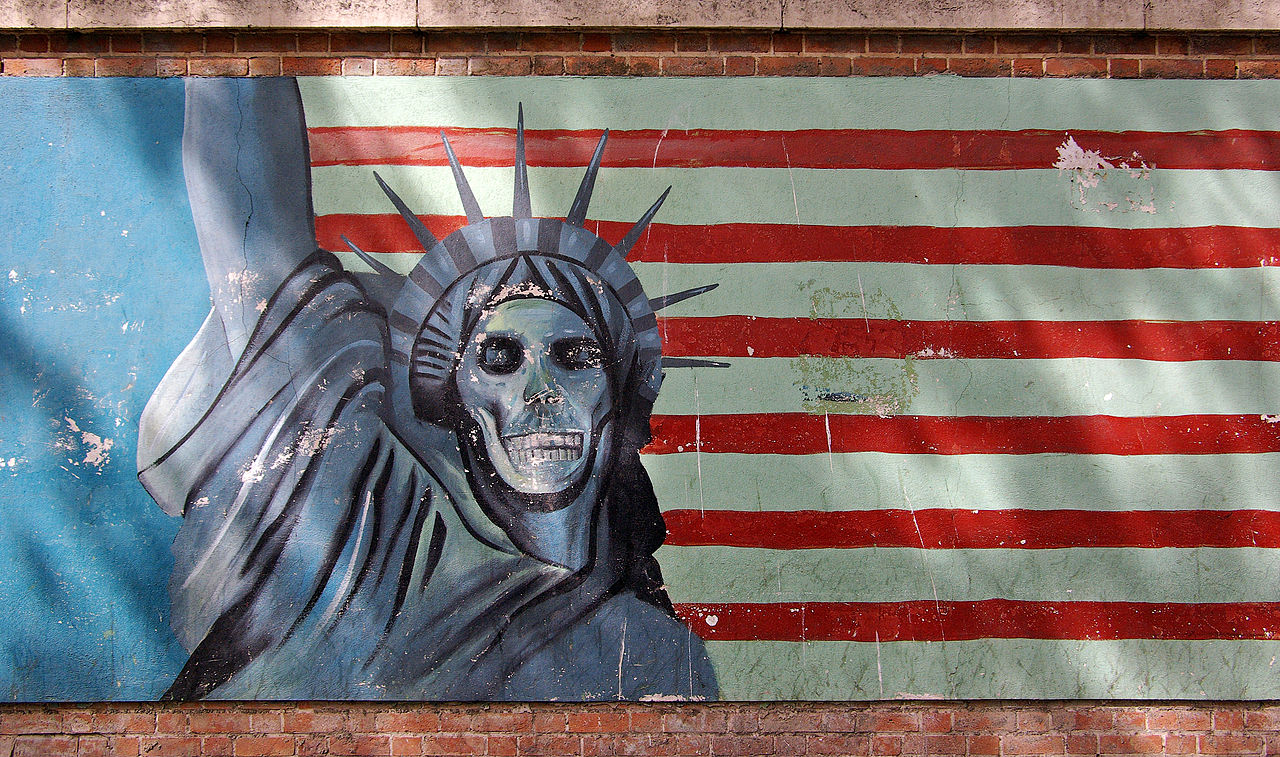 Anti-American graffiti on the former U.S. Embassy in Tehran, Iran in 2009. Photo by Phillip Maiwald

While Tehran is sticking to the “four corners of the deal” over its nuclear weapons program, neither Iran nor the United States is ready to go much beyond the agreement in normalizing relations, a panel of experts on the region agreed Wednesday.

Ellen Laipson, author of a new Atlantic Council report on what lies ahead for a new administration in Washington and Iran following its presidential elections in 2017, said Iran’s strategic goal is to have the “United States out of the region” while Washington wants to deter Tehran “from significant actions against us or our partners,” including Israel, Saudi Arabia and the Sunni Gulf Arab states.

From the Iranian perspective, Amir Handjani, a board director of the council, a Washington, D.C., think-tank, added, “They don’t see a gold pot at the end of the rainbow” because they signed the nuclear weapons agreement. Despite an economy growing at 4.2 percent per year and re-establishing its position in the international oil market, “inflation is still high; unemployment is high” and expected investment by European banks “hasn’t happened.”

Later, in answer to a question, he said, “74 percent of Iranians have a negative view of the United States” in a recent poll conducted by a United States and Canadian university. Iranian leaders “view themselves as a great power with a sphere of influence” and voice their disappointment on the slowness of benefits coming to them from signing the accord.

As a result, Handjani said Tehran has “turned eastward” to Russia, China and other Asian countries for investments in infrastructure and military modernization.

Michael Connell, the director of Iranian studies at CNA, said, “There’s kind of a quid pro quo” with the Russians, “something the regime didn’t want to advertise” when it allowed Moscow to send aircraft inside its borders to attack opponents of the Syrian regime of Bashar al Assad.

Tehran is “convinced their neighbors are out to harm them,” citing Saudi Arabia’s and the gulf states’ spending on military hardware and technology compared with its own as eight times higher than its own. Iran is estimated to spend about $16 billion on defense.

The Russians view trade with Iran—selling aircraft, submarines and missiles—as a cash business. Tehran see it as “they have technology we need . . . pretty high-end stuff” and transactional.

The reason for Tehran’s buying modern military equipment is explainable because Shiite Iran “doesn’t have any allies” in the region or stable and secure borders with its neighbors, Laipson said.

“Iran is at war with Daesh [Arabic acronym for the Islamic State]. That’s the national security issue on their border,” Handjani said.

Yet its continued support of Hezbollah in Lebanon and the Houthis in Yemen “has the real potential to spark an armed conflict” in the Middle East. On at least two occasions this month, the Houthis fired cruise missiles at the USS Mason (DDG-87).

He added the Iranians said the United States’ longtime support for Saudi Arabia with its sponsorship of the ultra-conservative Salafist movement of Sunni Islam is responsible for the rise of the Islamic State. “They are your client states” is the Iranian attitude, and Tehran isn’t “going to take it anymore,” so it backs the Assad regime in Syria, supports Shiite militias in Iraq and Houthi rebels in Yemen.

Having the United States allying itself with Iran or having Tehran “play in a role in that campaign” against the Islamic State “doesn’t build trust with the Sunnis,” Laipson added, in answer to a question.

Looking at other military capabilities not covered by the agreement, Connell said, “Cyber is perfect for the Iranians” because it is cheap and they already have a highly skilled technical work force. The Iranians, however, “don’t see it as a replacement for a nuclear deterrent” but as a complement to using proxies such as Hezbollah and part of the “broad domain of information warfare.”

Connell added in answer to a follow-up question the Israelis are “certainly going to be tracking the progress we make” with the Iranians as the agreement moves along.

How committed will Iran be to establish itself as a nuclear power in 10 to 15 years is an unanswered question now, Laipson said. “Revolutions do get tired over time.”