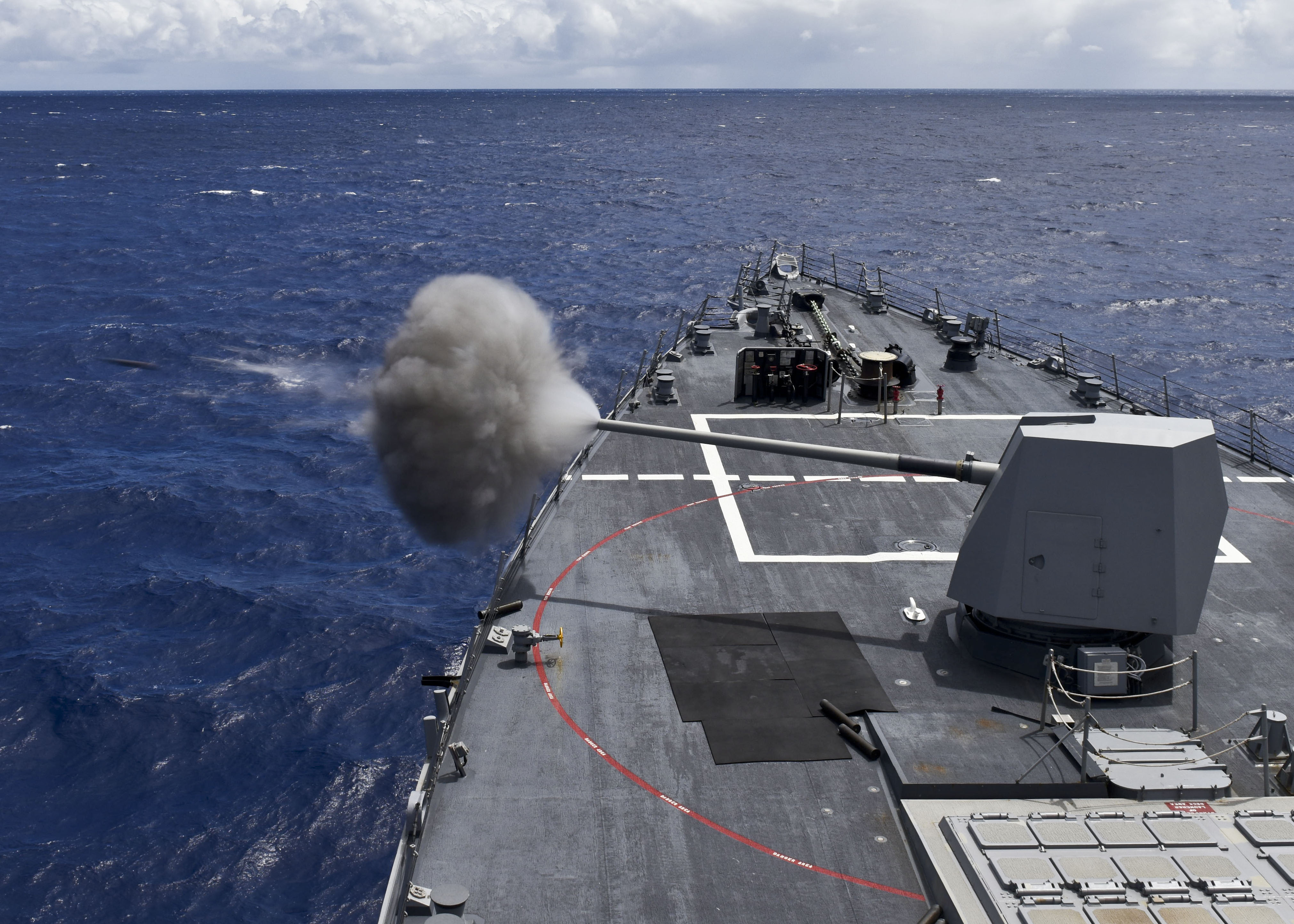 The Pentagon’s office tasked with tweaking existing and developing military technology for new uses is pushing development of ammo meant for the electromagnetic railgun for use in existing naval guns and artillery pieces.

The initiative will recast existing weapons as potential air defense platforms through a change in ammunition.

About year and a half ago, researchers at the Pentagon’s Strategic Capabilities Office and inside the service realized that there was more short-term promise for not only the Navy but the Army to use the Hyper Velocity Projectiles (HVP) rounds overseen by the Office of Naval Research (ONR) in both services existing powder guns, said SCO head William Roper said last week.

“To me they were just interesting test articles a few years ago, but thanks to that service input and us funding some high-risk demonstration we now think that we can do pretty revolutionary things with existing powder guns – think howitzers, Paladins, the Navy’s five-inch guns. We’ve shifted emphasis to that,” Roper said during a Wednesday talk at the Center for Strategic and International Studies (CSIS).
“Not that we’re not interested in railgun –we are – but if you look at the delta between fielding in quantity – we have [more than] a 1,000 powder guns, we have very few railguns.”
Last year, Naval Sea Systems Command told USNI News it was interested in taking the HVP being developed for the railgun and using the round with its Mk 45 deck guns found on its guided missiles cruisers and destroyers.

The HVPs can theoretically fired from the Mk 45 at Mach 3 – faster than the speed of a conventional unguided round but slower than one from a railgun. The Army plans similar testing with its 155 mm M109A6 Paladin self-propelled howitzers with the HVP.

“Capabilities in development would enable larger caliber guns to launch HVPs at air and missile threats over medium ranges (10–30 nautical miles),” read a May report on air and missiles from the Center for Strategic and Budgetary Assessment (CSBA).

The use of the powder guns as the first HVP platform changes the order of how the Pentagon originally thought of how the HVP and railgun programs would evolve.

“The railgun was initially a surface-to-surface weapon and we in the Navy realized that it was more useful for air defense. Then the realization came that you can use that same projectile in a powered gun and achieve a lot of the same effects that you were trying to achieve with the railgun,” Bryan Clark co-author of the CSBA report told USNI News last week.
“It gives you the speed – though not as fast – it gives you enough speed to use it in an air defense type of application.”

At the moment, the Army and the Navy both rely on missiles to intercept both ballistic and cruise missiles that can cost in the tens of millions of dollars but have ranges of hundreds of miles.

Comparatively, according to the CSBA study, the guided HVP round from a powder gun or a railgun could range from $25,000 to 50,000 at ranges of 30 miles.

The SCO-led research effort will work to create HVP sensor and a fire control regime that will find its way eventually to the railgun project, Roper said.
“So when the railgun is ready to field it will be able to just be dropped in place as a better launcher as opposed to being a great technology that we have to build a new architecture for,” he said.
“We’re going to take the bet and let’s see if we can field this and let’s completely flip the paradigm of missile defense.”

The HVP-powder gun initiatives is one of several projects of the SCO (pronounced Sk-Oh) – the years-old office that was only recently publicized by the Pentagon as part of Secretary of Defense Ash Carter’s push to emphasize high technology programs. Carter said the SCO’s mission was to “confound potential opponents.”

In addition to the HVP work, the SCOs more than 20 projects in the last several years include modifying the Navy’s Standard Missile-6 (SM-6) into a supersonic anti-surface weapon.