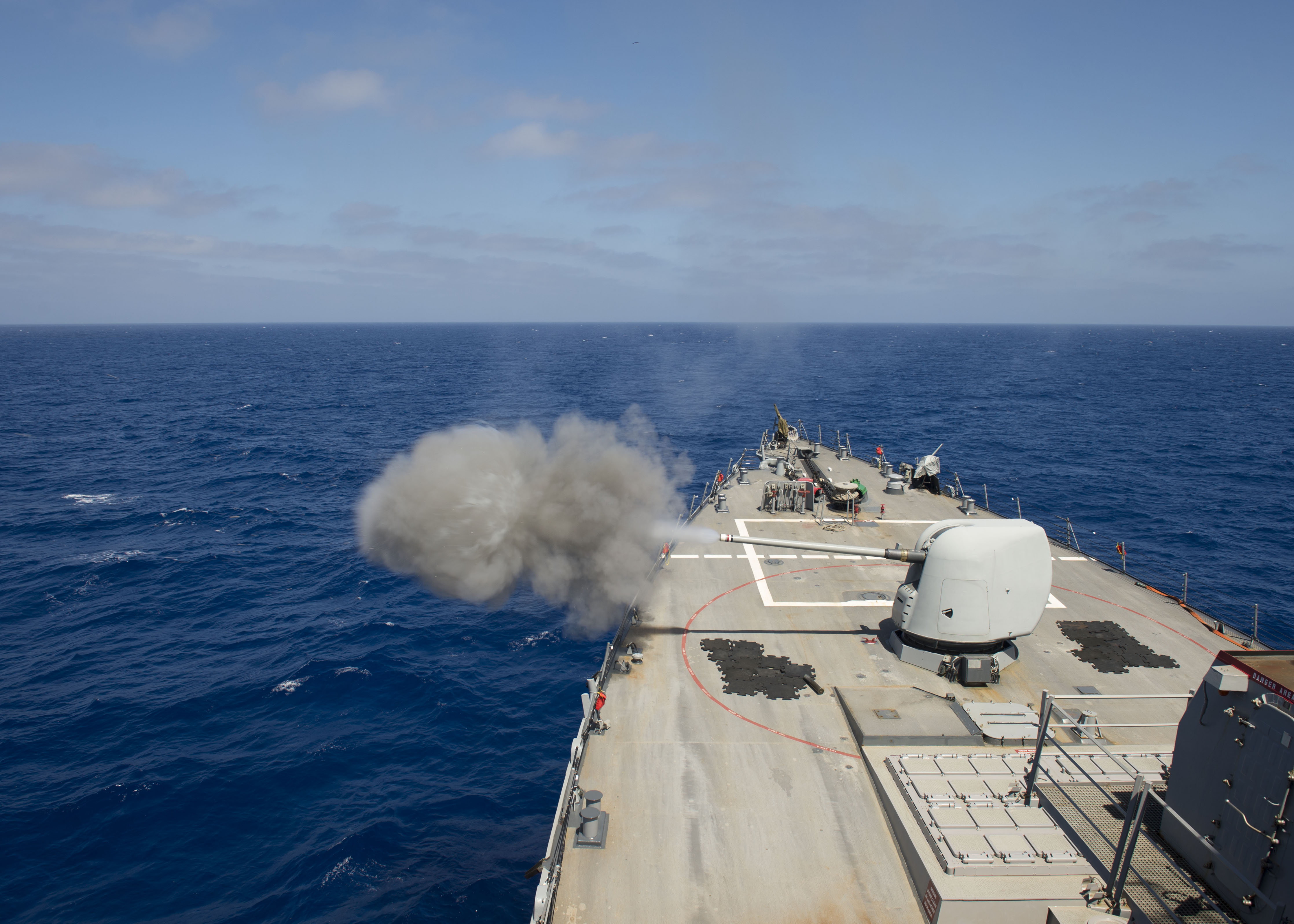 The U.S. Navy’s deck guns could take on new relevance if ongoing tests to fire a guided round at three times the speed of sound from their muzzles are successful, USNI News has learned.

The HVPs from a traditional deck gun will be slower than one launched from a railgun — a little over Mach 3 versus Mach 5 — but still more than double the speed of an unguided regular shell from the service’s Mk 45 five-inch gun found on its guided missile cruisers and destroyers, according to information from NAVSEA.

While deck guns are standard through out the fleet, they lack the range precision of the guided missiles found on cruisers and destroyers and have had shrinking utility in high-end warfare.

A high speed guided round from a deck gun could give U.S. ships more options to deal with air and ballistic missile threats while the Navy continues to refine the railgun design.

According to a service wish list for railgun applications revealed last year, the Navy wants a “multi-mission railgun weapon system to support detect, track and engagement of ballistic missiles and air and watercraft threats” by 2025.

A guided HVP round from a standard Mk 45 deck gun could bring a significant margin of the railguns promised capabilities to the fleet sooner, USNI News understands.

Unlike standard high-explosive rounds, the speed of the HVPs doesn’t need explosives and relies on the force brought from its speed to destroy targets.

The addition of the HVP to the arsenal could mean instead of sending a Standard Missile to interdict an air threat, a ship could instead fire a much more inexpensive salvo of guided shells from the deck gun to handle an enemy aircraft.

According to NAVSEA, the service is also investigating using HVP in larger guns than the MK 45.

“The round is being designed to be compatible with multiple guns in the U.S. inventory,” read the NAVSEA statement to USNI News.
NAVSEA didn’t specify, but USNI News understands the Navy is looking for alternatives to the $400,000-per-round guided rocket assisted Long Range Land Attack Projectile (LRLAP) fired from the 155mm Advanced Gun System (AGS) of the Zumwalt-class guided missile destroyers (DDG-1000).

Testing for the inclusion of the HVP in standard is ongoing and a timeframe as-of-yet for completion hasn’t been established. Likewise, there is no program of record for the effort yet, NAVSEA said.

Both BAE Systems and General Atomics have worked with the service on railgun and projectile technology, though NAVSEA did not specify any companies working on the effort.

“This is a government-led effort, and we are working to involve a number of different defense contractors at this stage,” NAVSEA said.

A BAE Systems designed railgun will undergo a first round of at-sea testing next year.