Fighting ballistic missiles, stealthy targets, swarmed surface and supersonic threats are high on the Pentagon’s wish list for its future electromagnetic rail gun, according to a request for information (RFI) for a rail gun fire control systems from Naval Sea Systems Command (NAVSEA) that posted in Dec. 22 but was quickly taken down.

The RFI for rail gun fire control systems was pulled because it posted earlier than intended due to a clerical error, NAVSEA officials told USNI News on Monday. The final announcement will repost on FedBizOpps later this month.

Regardless, the rescinded RFI — issued by NAVSEA on behalf of Directed Energy and Electric Weapons Program Office (PMS 405), the Office of Naval Research (ONR) and the Office of the Secretary of Defense (OSD) — gives major hints in how the U.S. wants to employ future rail guns.

The RFI sought a prototype system for a, “multi-mission railgun weapon system to support detect, track and engagement of ballistic missiles and air and watercraft threats,” by 2018 and an operational weapon by 2025.

NASEA asked industry to address at least one of the following areas:

The document did not outline speeds or ranges NAVSEA is seeking for the effort. In addition to air threats, the RFI also stressed the ability for the system to track and attack surface targets.

The timing of the operational capability — in the 2020 to 2025 timeframe — suggests the Navy may look to include an EM rail gun on its next generation large surface combatant. The follow-on to the Arleigh Burke-class destroyers and the Ticonderoga-class cruisers is in its earliest phases of development and planned to start construction in 2028, the service told USNI News last year.

EM rail guns have been advertised by the service for years as a solution to the ongoing problem of more stealthy and faster guided weapons that threaten naval vessels and aircraft. 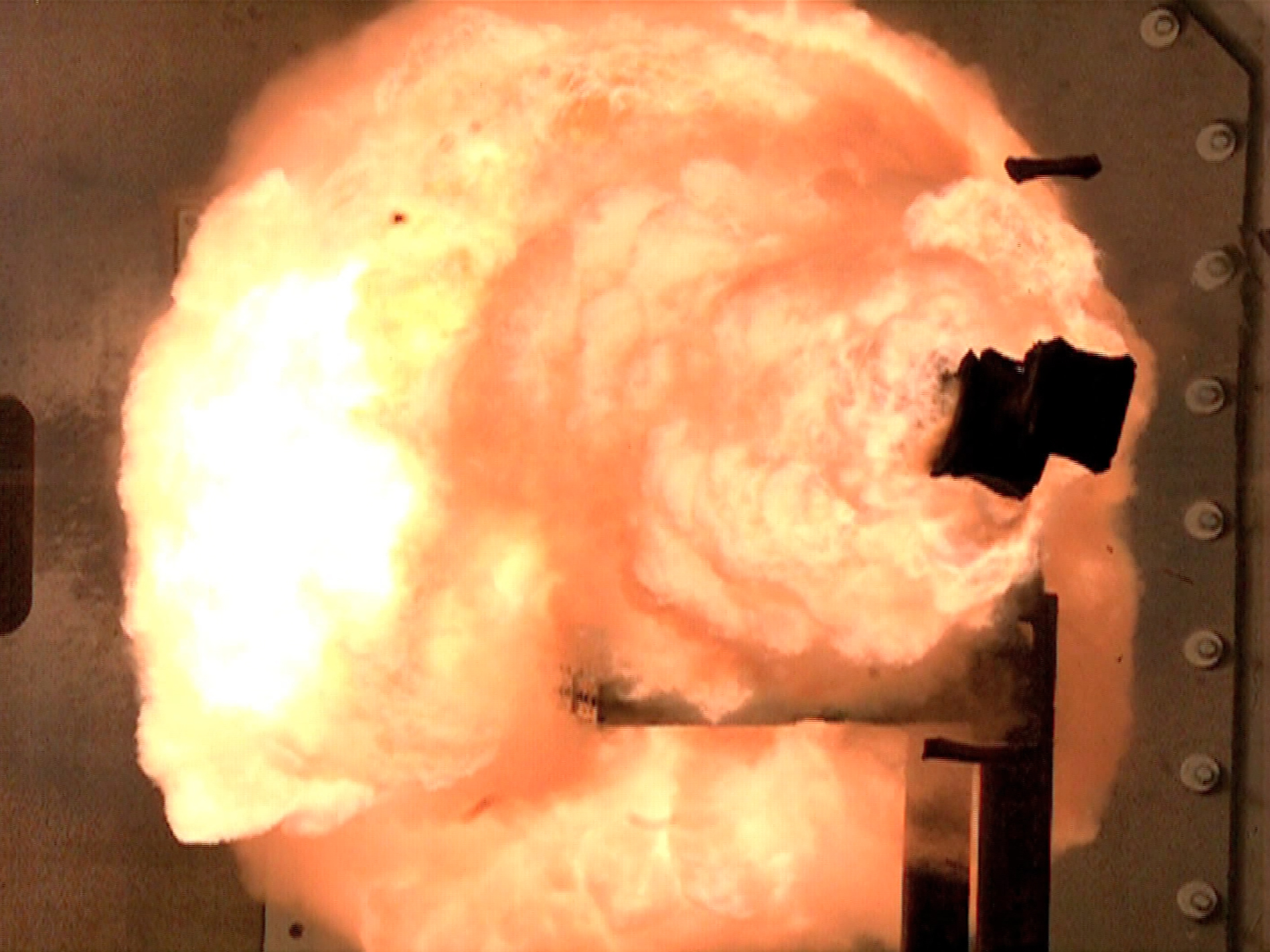 A high-speed camera captures the first full-energy shots from the Office of Naval Research-funded electromagnetic railgun prototype launcher in 2012. US Navy Photo

“It would be able to shoot down cruise missiles coming in that are relatively close,” retired Chief of Naval Operations (CNO) Gary Roughead told USNI News in 2013. “The electromagnetic rail gun is really horizon to horizon; if it flies, it dies.”

The Navy’s current systems — created mostly in the late 1970s — are designed to tackle air threats with expensive missiles as best expressed in the Aegis combat system found on the Navy’s guided missile destroyers and cruisers. The template of the Standard Missile (SM) and the radar system has been adapted to handle ballistic missile but at the cost of more than $11 million per missile.

Rail guns promise to handle air threats with ammunition that is cheaper to produce, with a larger magazine and a higher rate of fire.

The weapons project a round by creating an electromagnetic field that pushes the round at tremendous force along two charged rails without the use of any type of combustion. The round gets its destructive power from its speed — which can be five times faster than the speed of sound — when it hits the target.

Though the fundamentals are sound, building reliable rail guns is challenging.

One of the two electromagnetic railgun prototypes on display aboard the joint high speed vessel USS Millinocket (JHSV-3) in port at Naval Station San Diego, Calif. US Navy Photo

Not only do the weapons require a tremendous amount of power — sometimes in short supply on naval vessels — the rails want to pull themselves apart every time the weapon is fired. In addition to the power requirements and the engineering task of keeping the weapon whole, the Navy also has had to develop a system to quickly pulse the energy through the rails to gain the velocity needed to reach supersonic speeds.

So far, ONR has demonstrated it can fire a 32-megajoule weapon — capable of launching a projectile more than 100 miles — and now is working on creating a reliable weapon that can sustain repeated use.

Next year, the Navy will test a prototype rail gun on the joint high-speed vessel USNS Millinocket (JHSV-3) — from rail gun manufactures BAE Systems or General Atomics — for the first round of at sea testing.