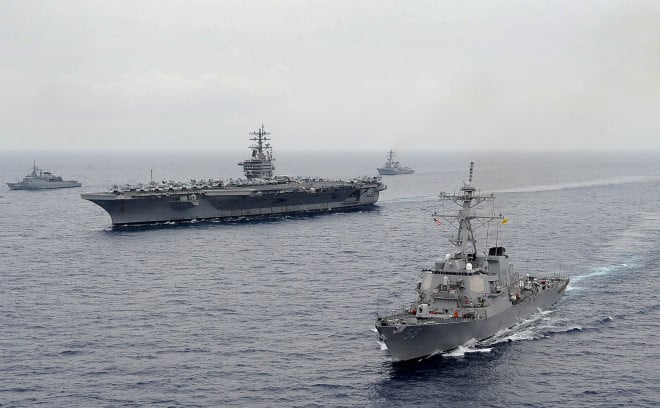 In the past few years the Pentagon has placed an emphasis on countering the challenges of A2/AD—a concept broadly defined as denying an assaulting force access to a battle space. In the maritime context, the traditional A2/AD tools have been mines and submarines. With the development of increasingly advanced and inexpensive antiship missiles, the calculus of an assaulting force has placed an emphasis having enough weapon capacity to counter threats.

While current systems are more or less able to meet the threat faced by the carrier strike group, the fundamental problem the U.S. Navy faces is running out missiles during a battle, which effectively results in a mission kill, Bob Work, chief executive officer of the Center for a New American Security, told USNI News.

“The biggest problem is your magazine,” said Work, who recently stepped down as under secretary of the Navy. “If the bad guy can fire enough missiles, then he can get kind of a mission kill on the carrier battle group.”

“That’s an issue how you manage your salvo doctrine, how you use and monitor your total weapon inventory—it’s all part of your operational plan,” Roughead told USNI News.

Roughead said that while warships such as Aegis cruisers and destroyers can replenish their magazines at sea with additional Standard Missile interceptors, the carrier battle group is limited by the weapon stores that the unit’s supply vessel carries. “
Once the supply ship is out, it must go back to resupply,” Roughead said.

Submarines, however, must return to port to replenish their stocks of torpedoes and cruise missiles.

Roughead said that there are ways to mitigate for the problem. For example, if the problem is enemy submarines and long-range patrol aircraft can be flown back and rearmed faster than a warship or friendly attack submarines—the strike group commander places more emphasis on using those assets to eliminate the threat.

But technology could help relieve some of the planning burden on fleet commanders and make the carrier battle group much more effective during future conflicts in contested environments.

“The real game-changer in all of this, is in my view, the electromagnetic rail gun,” Work said.

While there are many advocates of the rail gun for the strike mission, Work said that Navy has plenty of options to hit enemy targets. “What I would buy the electromagnetic rail gun for is theater ballistic-missile defense and cruise-missile defense,” he said.

Using a rail gun for defense would drastically reduce the cost-per-shot for the Navy when defending against mass salvos of guided cruise or ballistic missiles compared with an interceptor missile like a Standard Missile -3.

Perhaps more important, a warship can carry vastly more rail gun-rounds than it could ever hope to have missile tubes. Roughead said that railguns are a weapon inventory game-changer because of the projectiles’ size. “It increases the depth of your magazine,” Work explained.

“You don’t go ‘Winchester’ nearly as easily,” he added, using a naval aviation term for running out of weapons or ammunition.

The use of weapons such as the railgun would invert the cost-imposition strategy. Instead of launching, for example—two interceptors costing roughly $12 million to $15 million each at an incoming $10 million missile, the Navy could obliterate the target with a rail gun slug costing a fraction of that.

“It’s going to cost them a lot more to create a salvo dense enough to get though the electromagnetic rail gun,” Work said.

Work said that the Navy is also working on directed-energy weapons—particularly lasers. “If you get into directed energy, you essentially have—not limitless, because you’re dependent on power—but you have a significantly increase in magazine capacity if you’re just shooting power,” Roughead said.

The Navy recently announced it would deploy an industrial-grade laser on board its afloat forward staging base, the USS Ponce (LPD-15), in 2014. The solid-state laser weapon system (LaWS) has proved a limited ability to splash small unmanned aerial vehicles and disable small boats.

Work said that lasers are best used for applications similar to those for which the Phalanx close-in weapon system (CIWS) is currently used.

“It would be able to shoot down cruise missiles coming in that are relatively close,” he said. “The electromagnetic rail gun is really horizon to horizon; if it flies, it dies.”

But before rail guns or lasers can be deployed to the fleet, Roughead said, the technology needs to be further developed to reduce the physical size of the equipment to ensure it would be able fit on board combatant ships.

“It becomes a question of developing the technology to bring the [size of] power sources down so that you can rapidly fire these types of projectiles,” he said.

The third crucial technology for the Navy is an anti-torpedo torpedo, Work said. As the carrier battle group pushes into A2/AD networks in the littorals, the threat from submarines increases exponentially.

Extremely quiet diesel-electric submarines such as the Russian-built Kilo-class, in use by several countries in the vicinity of South China Sea, are of particular concern to U.S. battle groups. While the enemy submarines would likely prefer to engage U.S. naval forces from longer distances using cruise missiles, there will be instances where those vessels get into torpedo range.

“Submarines in, my mind, are the most problematic because they are the most stealthy of any weapon that you have,” Roughead said. “Antisubmarine warfare is hard stuff.”

Enemy torpedoes launched against U.S. naval forces are generally expected to be wake-homing torpedoes, which the Navy hopes to counter with anti-torpedo torpedoes, Work said.

The anti-torpedo torpedoes are smaller than the standard shipboard or helicopter-dropped 12.75-inch torpedoes, being about 9 inches in diameter.

Work said that the threat to carrier battle groups is increasing without question—that has been anticipated since the mid-1990s. But if Navy can get electromagnetic rail guns, lasers and anti-torpedo torpedoes into service within the next decade, the carrier battle group will be able to operate deeper inside a contested environment.

“They will definitely operate differently and they will most likely operate from farther range,” Work said. “This is a tough competition, no doubt about it.”

While life might be getting tougher for a carrier, the ship and its battle group are still in a better position than land bases.

“I still believe the carriers are going to be extraordinarily important because even though everybody tends to focus on the vulnerability of carriers, a land base in the range of an adversary’s weapons is even more vulnerable because you can’t move it,” Roughead said.