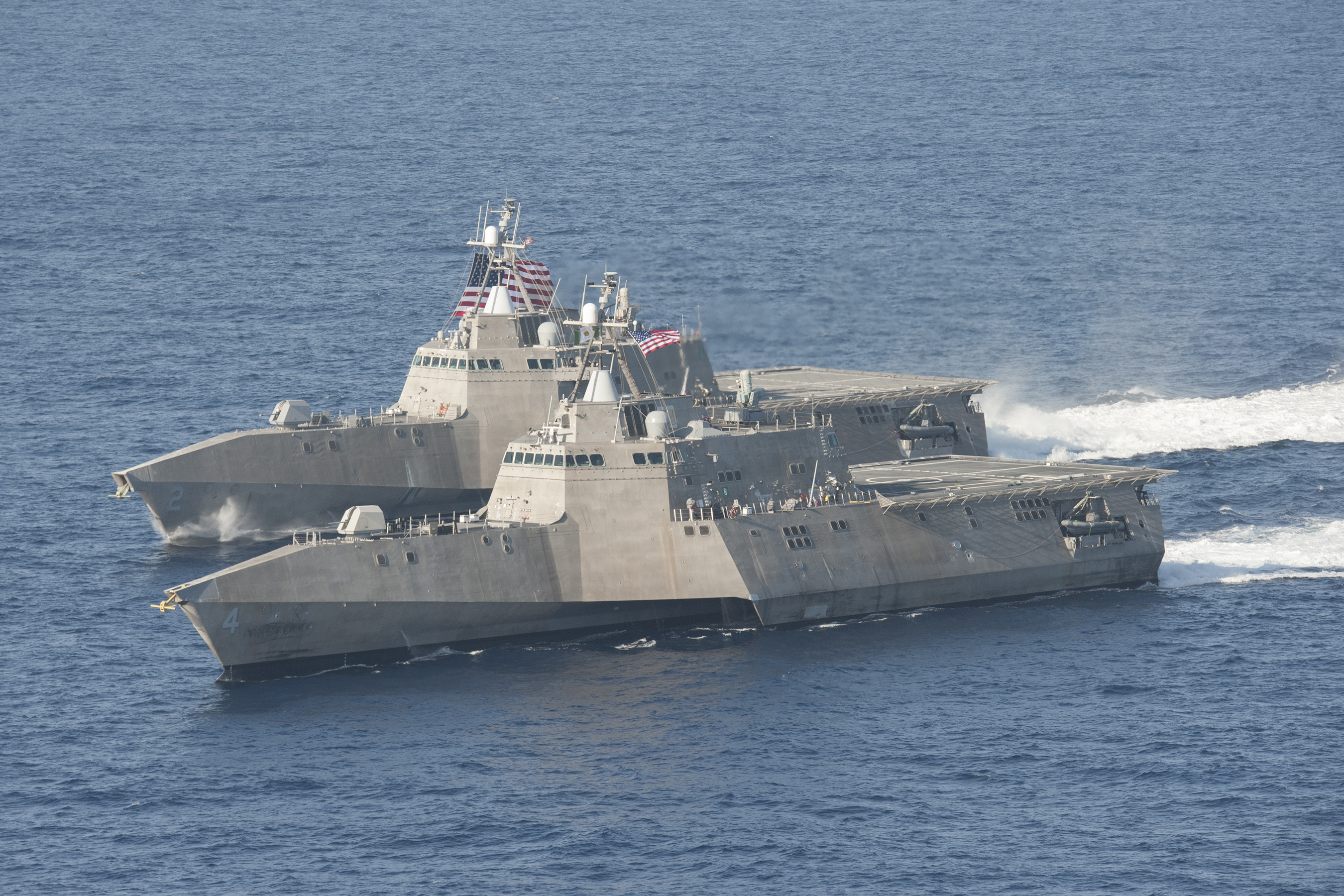 The littoral combat ships USS Independence (LCS 2), back, and USS Coronado (LCS 4) are underway in the Pacific Ocean in April 2014. US Navy photo.

USS Coronado (LCS-4) departs its San Diego homeport today for an extended maiden deployment in the western Pacific, making it the first of the aluminum, triple-hulled Littoral Combat Ships to make an operational cruise.

In addition to demonstrating the operational capabilities of the Independence-variant LCSs, Coronado will be the first LCS to deploy with a composite aviation detachment that combines a manned MH-60S helicopter and a MQ-8B Fire Scout rotary wing unmanned aerial vehicle.

Although Coronado’s crew of 70 said goodbye to family and friends at Naval Station San Diego today, its deployment will not start officially until August, a Naval Surface Force Pacific spokeswoman told USNI News. The ship will go first to Hawaii to participate in the massive Rim of the Pacific international naval exercises involving ships, aircraft and personnel from 27 nations.

“We’re excited to have USS Coronado taking part in the world’s largest international maritime exercise,” Vice Adm. Nora Tyson, commander of U.S. 3rd Fleet, said in a Navy news release.
“This ship will play a critical role in the fleet and in our nation’s defense. RIMPAC provides a good opportunity for our partner navies to work with the ship and see how it can contribute to collective regional security.”

During the RIMPAC operations, Coronado will fire a Harpoon missile, the first time an LCS will shoot the large anti-ship weapon that normally is employed by larger warships.

But that will be only the latest in a string of weapons tests Coronado has conducted during its workup for the first deployment. In 2014 it fired the Norwegian-produced Naval Strike Missile in a foreign comparative test. In 2015 it tested the proposed LCS surface warfare mission package, with the Mk 110 57mm gun and the Mk 46 30mm gun, against single and multiple fast inshore attack craft. And earlier this month Coronado successfully employed the SeaRAM self-defense system against a simulated ant-ship cruise missile. It had test fired a SeaRAM in 2015 as part of the Navy’s efforts to certify the system to provided added self-protection for surface warship against the proliferating cruise missile threat.

Following the RIMPAC participation, Coronado will sail west for what is scheduled to be a 16-month deployment during which it will be based at the Changi naval base in Singapore and will operate with the U.S. 7th Fleet and conduct individual training exercises with a variety of allied and partner nations in the region, similar to what USS Fort Worth (LCS-3) had done during its deployment the year before, the Navy spokeswoman said.

Navy officials have said that because of its size and ability to operate in confined and shallow water, the LCS is better than the larger Arleigh Burke-class destroyers to train with the smaller vessels used by most of the friendly navies in Southeast Asia.

Coronado also will be conducting the first extended operational test of the composite rotary-wing aviation unit, with a Seahawk helicopter and Fire Scout UAV, operated by a detachment from Helicopter Sea Combat Squadron Twenty-three (HSC-23). Pairing the two aircraft would allow the unmanned Fire Scout to conduct long surveillance missions, saving the more sophisticated and expensive manned helicopter to respond to any threat. The Fire Scout will be the first of its type equipped with the improved AN/ZPY-4 maritime surveillance radar by Telephonics, and an upgraded mission control station from Raytheon. 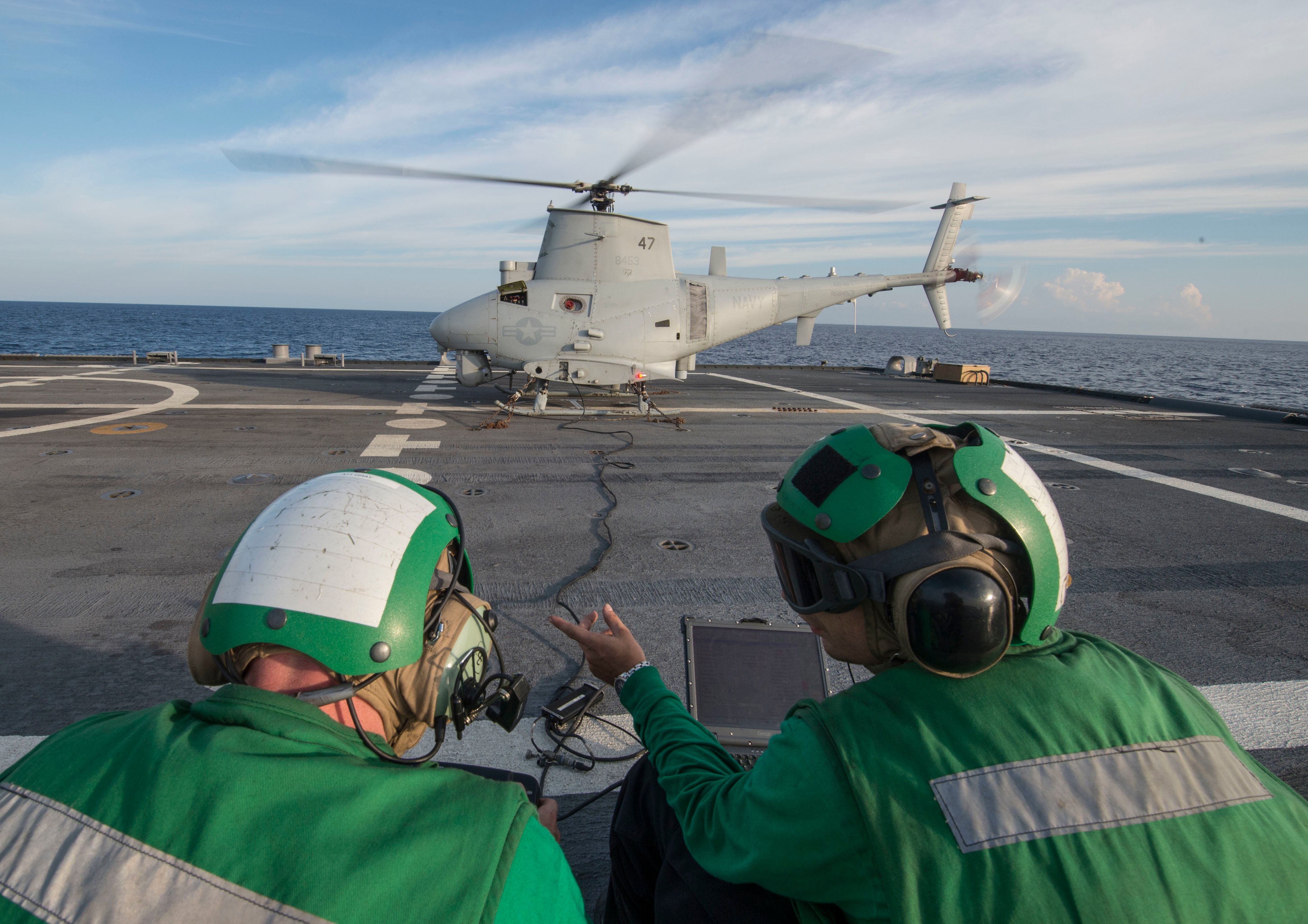 During its extended deployment, Coronado will experience at least two complete turnovers of its crew, in keeping with the evolving 3-2-1 concept, in which three different crews would rotate through two ships to keep one deployed. The crew of 70 is larger than originally conceived for LCS and reflects early experiences that showed the lower manning put excessive strain on the crew and did not allow for proper maintenance and on-board training.

“It is an honor and privilege to deploy the first LCS-2 variant to the 7th Fleet AOR (area of responsibility),” Larson said in the Navy news release.
“It’s time to demonstrate the full potential of these ships to the fleet, and I have every confidence that the Coronado team is poised to execute at a high level of vital operational tasking.”

Coronado’s mission also will be an opportunity for the Navy to show it has corrected the maintenance and material problems that hobbled Fort Worth on its first operational deployment and crippled USS Milwaukee (LCS-5) shortly after entering Navy service. Both of those ships are in the traditional single-hulled Freedom-class. Fort Worth experienced a partial propulsion system failure Jan. 12 while docked in Singapore and had to return to San Diego on its backup system. The damage to its complex gear system was attributed to the crew’s failure to provide adequate lubrication. Less than a month earlier, Milwaukee had a complete propulsion shutdown while sailing from its construction shipyard in Wisconsin. It had to be towed to Norfolk, Va., and subsequent inspections revealed small metal particles in the gears’ oil and filters.

The problems with the two ships added to the controversy over the LCS program, which has been criticized because the first ships were well over the predicted price and behind schedule. Some critics also argue that the lightly armed ships, built to modified commercial standards rather than normal combatant requirements, could not survive in a conflict. The Navy remains at odds with Defense Secretary Ash Carter, who has directed a reduction in the planned buy from 52 ships to 40 and a downselect to one of the two current builders. The Freedom-variant ships are built by Lockheed Martin and Marinette Marine in Marinette, Wisc. The Independence-variant ships are produced by Austal USA in Mobile, Ala.

Due to the timing of the planned downselect, Coronado’s deployment will be the only operational use of an Austal ship prior to the Navy’s decision on who will build the follow-on frigate program. Though program officials told USNI News that the downselect won’t be based on how well each variant performed during deployments, the Navy will be able to better validate builders’ assumptions based on real-world data collected while operating out of Singapore.