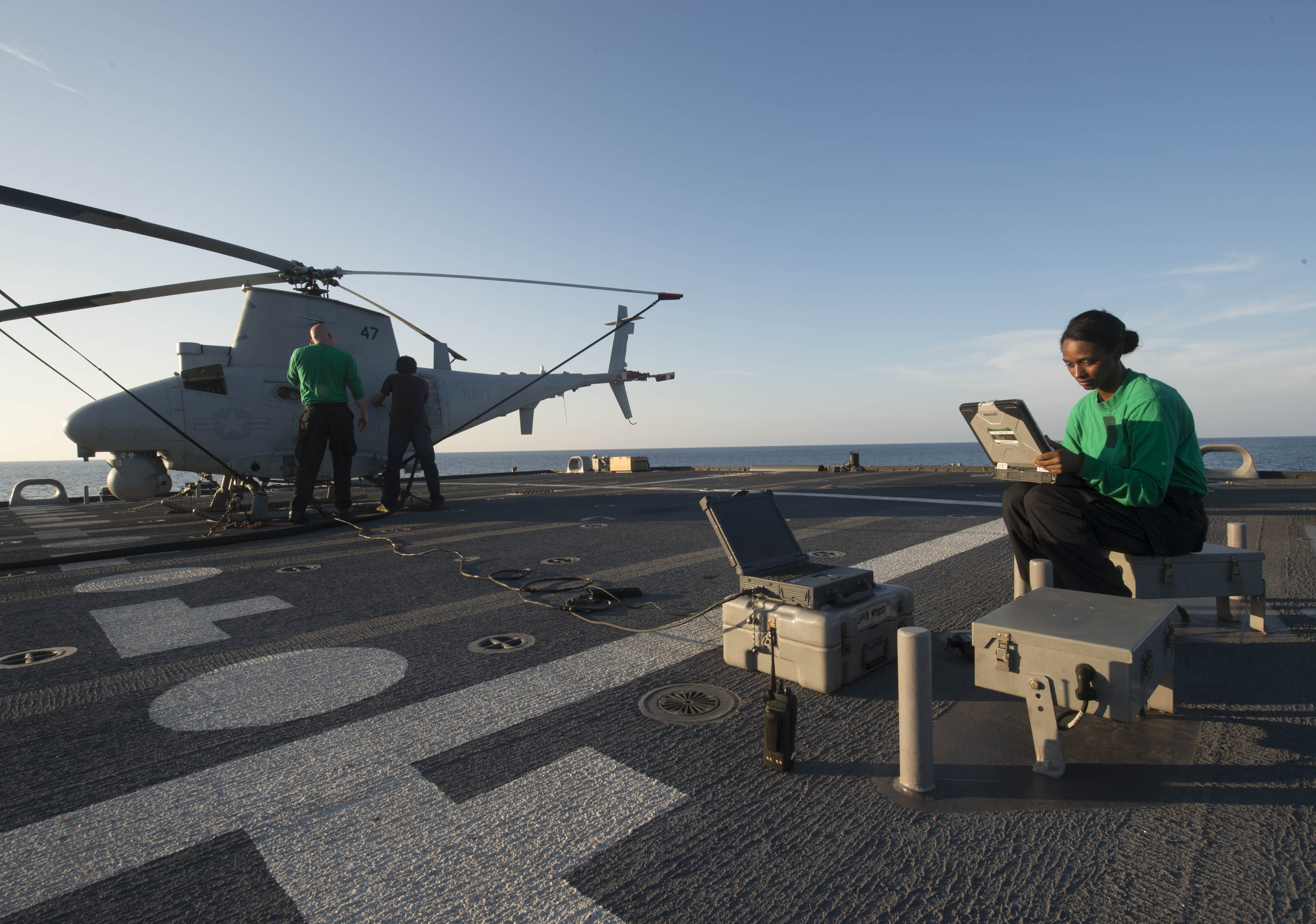 The Littoral Combat Ship USS Coronado (LCS-4) is now outfitted with the MQ-8B Fire Scout unmanned aerial vehicle and with Raytheon’s newly upgraded Fire Scout ground control system, ahead of an upcoming Coronado maiden deployment to Singapore.The Fire Scout system was previously tested on USS Fort Worth (LCS-3) during the ship’s deployment to Singapore last year, participating in some international exercises, and will be included in the surface warfare mission package from the start of the Coronado deployment.

“This upcoming composite MH-60S/MQ-8B deployment is the first of its kind for the HSC community,” he wrote of the manned and unmanned helicopters in his squadron.
“The difference is that we will be deploying with a AN/ZPY-4 radar on the Fire Scout. That is also a first of its kind. … We hope to integrate the Fire Scout and MH-60S in every way possible to act as a force multiplier for USS Coronado. To date, I have completed two workups on USS Coronado: Integrated Ship Air Training Team (ISATT) and Independent Certification Exercise (IDCERTEX). The ship was put through 10 days of scenario-based training, simulating typical missions we may see in 7th fleet (area of responsibility). The Fire Scout flew over 19 hours and served as an integral part of the LCS-4 / HSC-23 team.”

Additionally, Raytheon has recently upgraded its Fire Scout mission control system, making this the first deployment of the new capability. Bob Dehnert, director of command, control and awareness at Raytheon’s Intelligence, Information and Services business, told USNI News on April 28 that the upgraded mission control system improves the user experience by making displays simpler and more intuitive, decreasing latency between when the user clicks the touchscreen and the system responds, decreasing the number of clicks it takes to get to certain functions, and making the display more customizable for users.

Dehnert said Raytheon sits in on human-machine interface working groups with the Navy and has gained valuable insight that assisted in the control system upgrade. He said the crews using unmanned vehicles are young sailors accustomed to using state-of-the-art technology in their personal lives and have a lot of ideas on how to improve the systems they’ve been given to test out.

That feedback is also helpful to Raytheon, Dehnert said, because the company is the Navy’s prime contactor for its Common Control System (CCS) effort to develop a single unmanned system ground station that would be used to operate any UXVs – unmanned air, ground, surface or subsurface vehicle in the fleet.

Raytheon this fall will deliver a core module – software only, to be used with Navy hardware – that will be able to conduct basic command and control of any UXV in the fleet. Dehnert said there is a slew of factory acceptance testing and other reviews and certifications coming up between now and delivery. The project will not end there, though, he said – in addition to constantly improving that core module over time, Raytheon will also build a weapon system module for the CCS, which will control the use of mission-related functions on the Fire Scout, the MQ-4C Triton and the in-development MQ-XX Stingray.

“Those are the first three out of the chute, but then you can think of LDUUV, the long-duration underwater vehicle, as the next one, and we’re excited about that because it’s a different domain,” Dehnert said, adding that Raytheon has already tested CCS with a small unmanned underwater vehicle and found that it’s a natural outgrowth of UAV control, since air and underwater vehicles operate in three dimensions.

Dehnert said he sees all the services ultimately moving to this kind of common control model for cost-savings reasons, but he said the Navy has a unique problem of real estate shortage aboard ships, and having a single control station to operate all unmanned systems instead of finding the room and the power for multiple ground stations would be ideal for the sea service.